FFG: Meet The Six Heroes of ‘Descent: Legends of the Dark’ 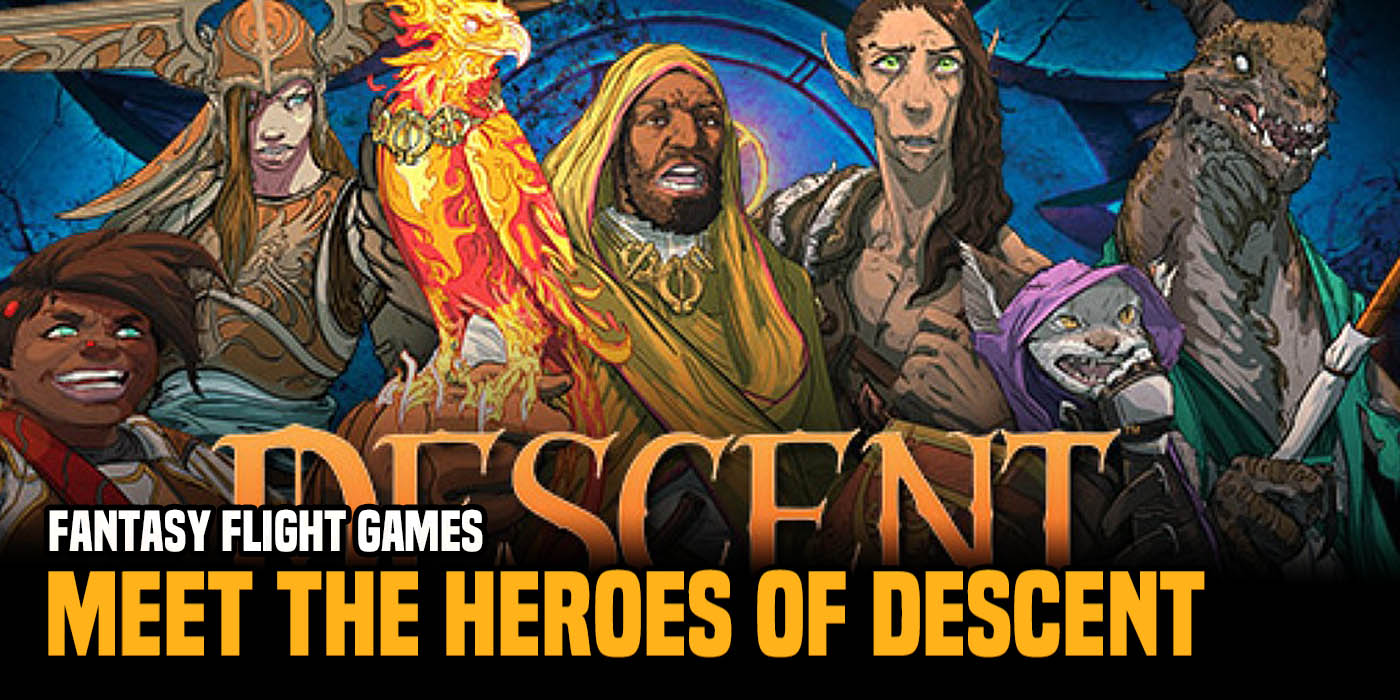 Fantasy Flight Games is showing off some new art for the six heroes you can play in Descent: Legends of the Dark.

It’s time to gather your party and head back into the lands of Terrinoth. There is a new Descent game coming and the dungeon delver is returning in a BIG way. Today, we’re getting an introduction to each of the six heroes in the new game so let’s dive in! 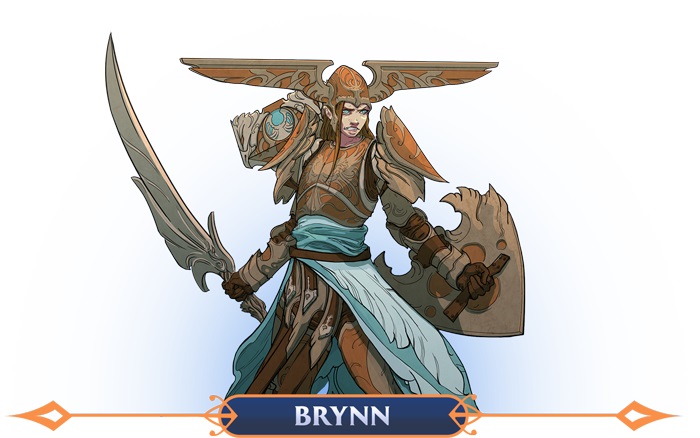 “From a minor branch of a noble family, Brynn has always wanted to uphold her family’s noble ideals by serving as a warrior for justice and law. She joined the Marshals of the Citadel to do just that. But during her training, the Marshals were ambushed and slaughtered by the Uthuk Y’llan. Since then, Brynn’s aunt has called her home to take her place as heir to the barony of Forthyn, turning Brynn’s whole life upside down. Little does she know, this is just the beginning.”

Brynn is capable of both solid offense and defense. She makes for a great pick for a cornerstone of your party as she has the ability to protect her allies or open up with some brute-force attacks of her own. 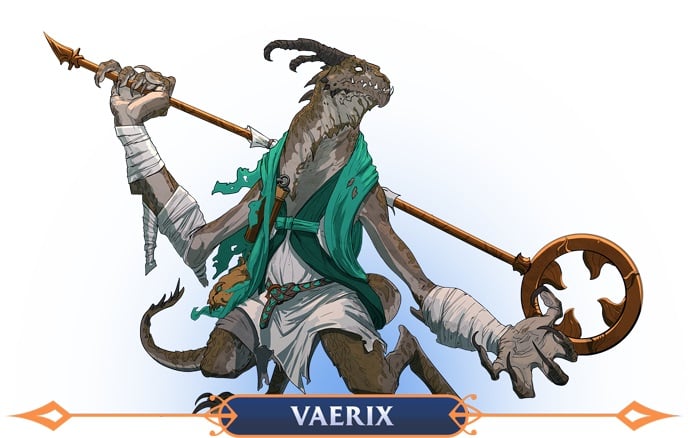 “Vaerix once served the dragonlords as a respected teacher and leader among the dragon hybrids. However, when they began to tell others of their dream, of an independent future for hybrid-kind apart from the dragonlords, they were brutally cast out. Since then, Vaerix has played the part of the wandering prophet and adventurer, trying their best to forget the pain and humiliation of their exile…and the plight of the hybrid faction they left behind.”

If you’re looking for a great support option look no further than Vaerix. Their skills and abilities allow them to help your other team members recover fatigue and damage which will keep them going and in the fight. Vaerix also has some card manipulation to aid others, too. Mostly wearing light to medium armor (at least at the start) Vaerix will be another great pick in your party. 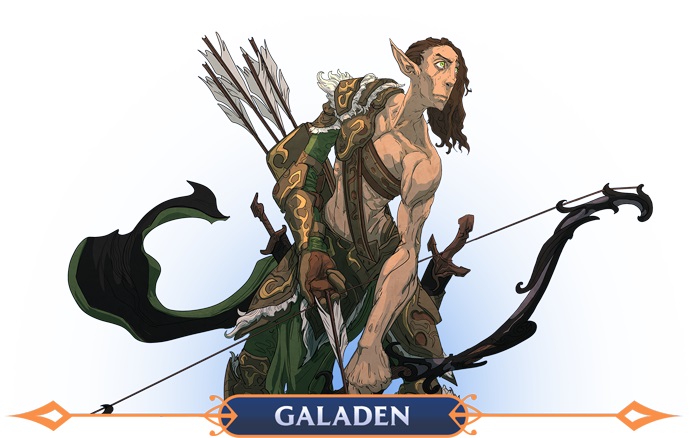 “Galaden has a long family history of service and suffering. He was a member of an elite band of rangers who hunted and defied the Uthuk far from elven territory. Unfortunately, Galaden’s company was ambushed and slaughtered, leaving Galaden the only survivor. Now haunted by nightmares and the grief of losing his companions, Galaden seeks vengeance against the Uthuk. Galaden is a member of the Evenarilam bloodline of the Verdelam, the ‘green-blooded’ Latari elves. Like most members of his family, he is deaf. He’s had practice honing his other senses and skills, along with reading lips from acting as a diplomat.”

If you’re looking for a hero who’s fast and great at range Galaden is for you. He’s got some more specialized skills and to make the most of them you’ll want to stay back – but he can mix it up in close if need be. He can also ‘expose’ enemies in line of sight so they take even more damage from attacks. 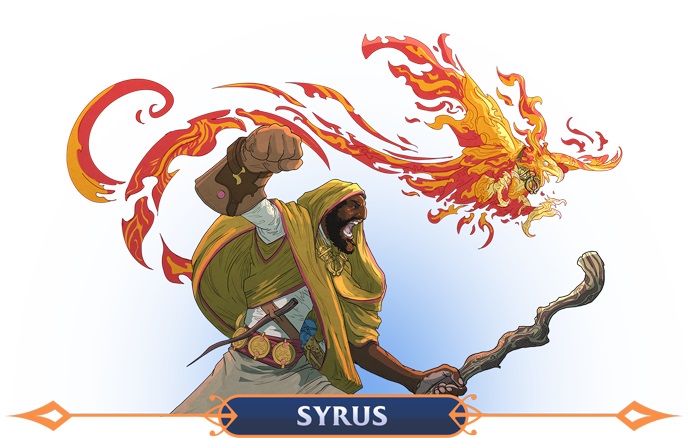 “Syrus Indahlu, an ambitious and dedicated student of magic, does not regret bonding his life force to bring the phoenix, Indris, back from the brink of death. But that incident offered him his first glimpse that the world, and he himself, fell short of his idealistic expectations. He has always felt that he could use magic to make the world a better place and help bring out the best in others. But after Indris greatly heightened his magical abilities, he left the Universities of Greyhaven to travel the land and make a difference in peoples’ lives.”

Do you like magic? Do you want to harness the power of the Phoenix and attack your foes? Syrus is the hero for you! Able to turn potential successes into successes at the cost of fatigue, Syrus is a reliable source of damage. He can then take that fatigue and deal even more damage to your foes. If you like combos and flashy moves keep an eye out for Syrus. 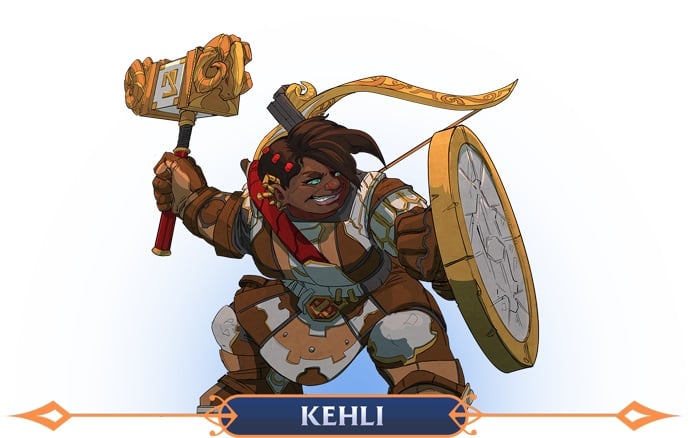 “Kehli Deepfire has long had a simple ambition: become a great hero, as in the stories her father told her from her youth. Her ambition has been greatly aided by her obvious brilliance, which allowed her to achieve the status of “master” in both the Forge Smith’s Guild and the Dunwarr Alchemist’s League. For years she studied and practiced her craft, secretly joining two competing guilds. Although she can synergize her skills in smithing and alchemy to do things no one else can, Kehli must carefully guard her secret of dual membership, lest she be cast out of both guilds.”

Kehli is short in stature but big in heart. And possibly ego. She’s got the resources to turn the tides in most situation – it’s a matter of knowing which tool to use. She’s also got some trick to help trap and slow her enemies as well. Kehli’s resourcefulness is a welcome boon to any party. 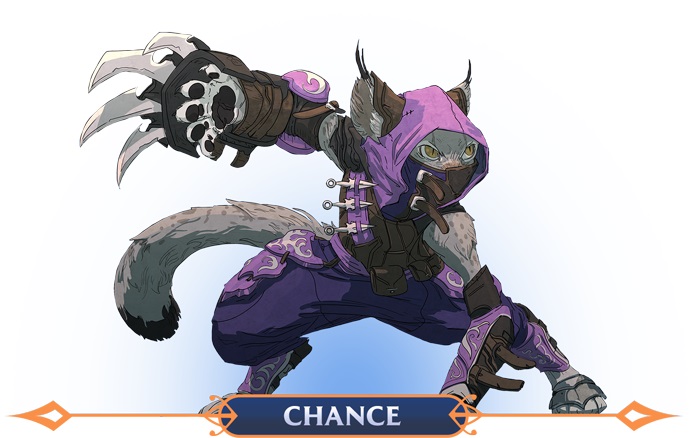 “Like many Hyrrinx, Chance was exiled from his community when they ran out of enough food to feed the entire group. Forced to survive on his own, he resorted to a life of crime at a young age, initially working for a street crew in Frostgate. His skill was quickly recognized by those above him, and he was moved to work directly under and for the Outlaw Prince. Chance was brought up to believe that only the good fortune granted him by his master, the Outlaw Prince, has kept him alive and successful this far in life.”

A rogue with a heart of gold? Maybe…maybe not. Chance is a deadly attacker and is perfect to deliver the finishing blows to an unwary opponent. If you’re looking for a clever warriors who’s got some “brutal combos” Chance is ready to strike from the shadows! 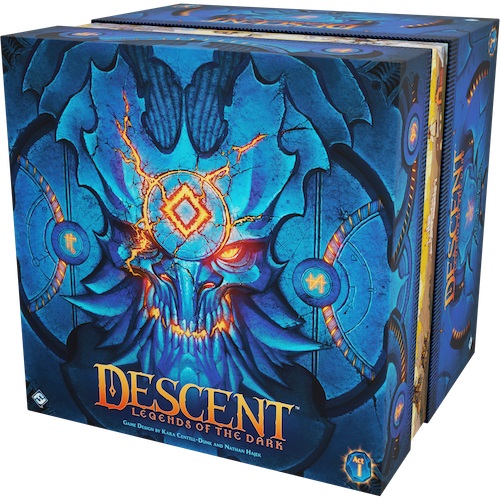 “For years, your journeys have taken you across the fantasy realm of Terrinoth, venturing into dark forests, shadowy cities, ancient crypts, and misty swamps… but your true legend is about to begin.

Forge your own legend together with your friends as you adventure across the vibrant fantasy realm of Terrinoth in Descent: Legends of the Dark, the definitive cooperative dungeon-crawling board game for one to four players! Powered by its fully integrated free companion app, Descent: Legends of the Dark puts you in the role of a budding hero with their own playstyle and abilities. Together with your unlikely companions, you’ll begin an unexpected adventure—an adventure told across the sixteen quests of the Blood and Flame campaign. Throughout your campaign, you’ll face undead lurking in the mists, demonic barbarians stalking the wilds, and even more terrifying threats. With 46 pieces of 3D terrain and 40 stunning hero and monster miniatures to draw you into the game, your greatest adventure is yet before you!”