The Bad Batch are back with a look at the post Order 66 galaxy far far away. Here’s what we noticed and what we think is coming later in the season.

This Tuesday the Bad Batch premiered with a special seventy minute long episode setting up a season that promises to be exciting, illuminating, and full of at least a few more twists and turns. We noticed a few key Easter eggs and hints, and these are our favorite spoiler-filled tidbits.

News On The March! 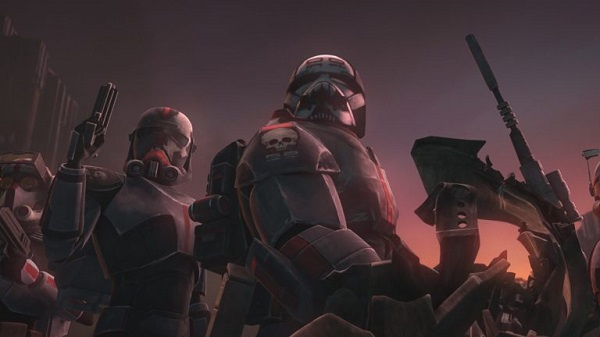 The intro to Bad Batch was thematically very very good and set the tone for the show well. First the “The Clone Wars” logo that we all known and love burned away to reveal the black and slightly rusty looking Bad Batch title and then the announcer from early episodes of Clone Wars set the scene for the episode. This is all fitting as the Clone Wars come to an end in the first few minutes of the episode.

It paves the way for the Clone Force 99’s solo story to really start and the news announcer voice was one of my long-lost favorite parts of some otherwise rough original episodes. It’s kitchy and a little silly, but it’s also reminiscent of old-timey war time news reporting and in a small and not terribly serious way reminds us that these shows are on some level gritty war dramas, behind all of the space lasers and goofs.

If you recognized Jedi Master Depa Billaba right away, you may have been clued in to the fact that we were about to see a certain future Rebels cast member. And sure enough moments later Caleb Dume was there with the Bad Batch not far behind. Of course, this joyous moment was cut short by a very sudden Order 66 and a closer look at Caleb’s escape and the start of his life on the run as Kanan Jarrus.

If this episode of Bad Batch didn’t make you sad enough and you want to know more about Caleb’s transformation into Kanan, there is a series of Kanan comics to explore as well as the novel New Dawn by John Jackson Miller. Also, do you think they asked Freddie Prinze Jr. to do a child’s voice and he said no, or it was a directorial choice to give a fourteen year old Caleb the same fully grown Kanan voice? 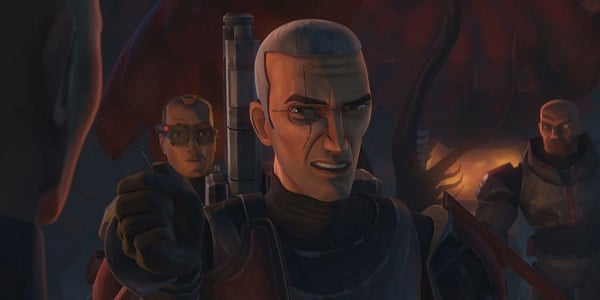 Crosshair repeated a few times throughout this episode “Good soldiers follow orders.” It’s a weird sentiment coming from a member of Clone Force 99 who are known for ignoring orders and taking a more interesting approach to problem solving. But if the line sounded familiar, it’s probably because you’ve heard a clone say that line before. In season six of The Clone Wars clone trooper Tup’s inhibitor chip malfunctioned, resulting in him executing a mini Order 66 and Jedi Master Tiplar while repeating “Good soldiers follow orders.”

This story line ends in tragedy as only Fives really figures out what has been happening and who is covering it up but too late to save Tup or prevent the later massacre. Crosshair’s utterance of this line is the first hint that he has a working inhibitor chip, even if isn’t working to the same level as the “reg” clones and let’s us know that not all enhanced clones are immune to the chip’s programing.

Omega and The Clones Still Growing

We finally meet Omega, the young and very curious “medical assistant” to Kamino’s chief medical scientist, Nala Se. Eighty percent of Clone Force 99 are surprised to hear that she is also an enhanced clone, but in light of Tarkin showing up to end the clone program and her name representing the end of the Greek alphabet, this only raises more questions. We can see throughout the episode that there are other clone children and fetal clones still being formed, but Omega seems to be Nala Se’s favorite.

She is the only female clone, has jewelry reminiscent of what Nala Se wears on her own head, and acts as her personal medical assistant. Nala Se is seen helping the Bad Batch (and Omega) escape, and Omega has been enhanced in at least a few of the same ways members of the Bad Batch have – she is smart enough to be a child medical assistant and a natural with a weapon she never held before. It’s likely Omega is the final product of years of Nala Se’s work, research, and experimentation and may be thematically set up to be the last new clone to leave Kamino. 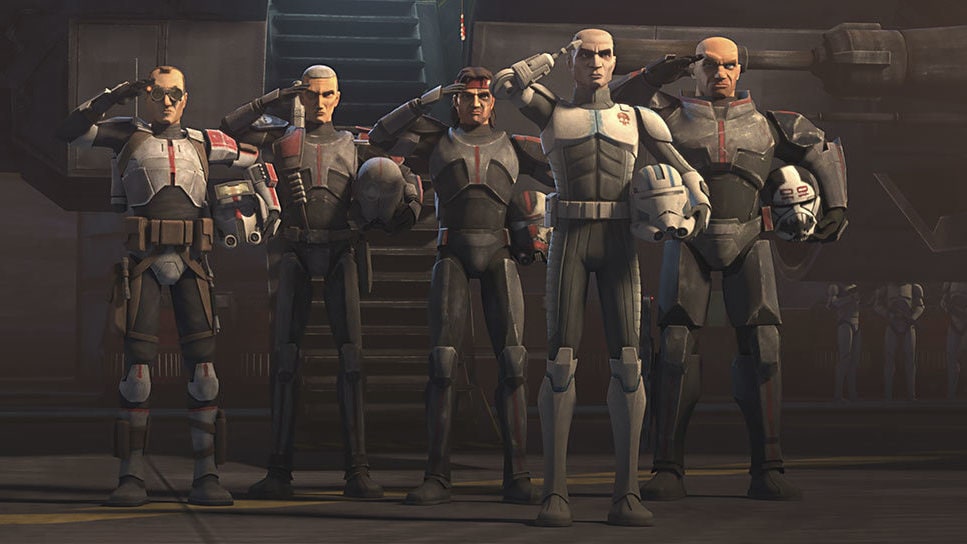 The end of the episode sees the batch minus Crosshair and with the addition of Omega going on the run from the newly formed Galactic Empire. They decide to chart a course for J-19, or the Suolriep Sector, claiming that one of their few friends is out that way. The Suolriep Sector is made up of a series of barren planets on the outer rim, so who could possibly be out there for the Batch to rendezvous with? Possibly Captain Rex, but at this time he and Ahsoka are busy with their own post Order 66 issues and he would likely be on the lam himself. This mystery friend could also be Cut Lawquane, another clone who decided to retire (desert depending on who you ask) and live a quiet life of farming and parenthood. His family is in the Saleucami System which happens to be within J-19. Of course, that would be a deep cut for anyone who isn’t borderline encyclopedicly invested in eleven year old Star Wars cartoons, so we really can’t be sure just yet.

What Easter eggs did you notice during episode one of The Bad Batch? What do you think will happen in the rest of the season? Which member of Clone Force 99 do you identify with most? Let us know in the comments!