Warhammer 40K: What to Do With Commander Shadowsun 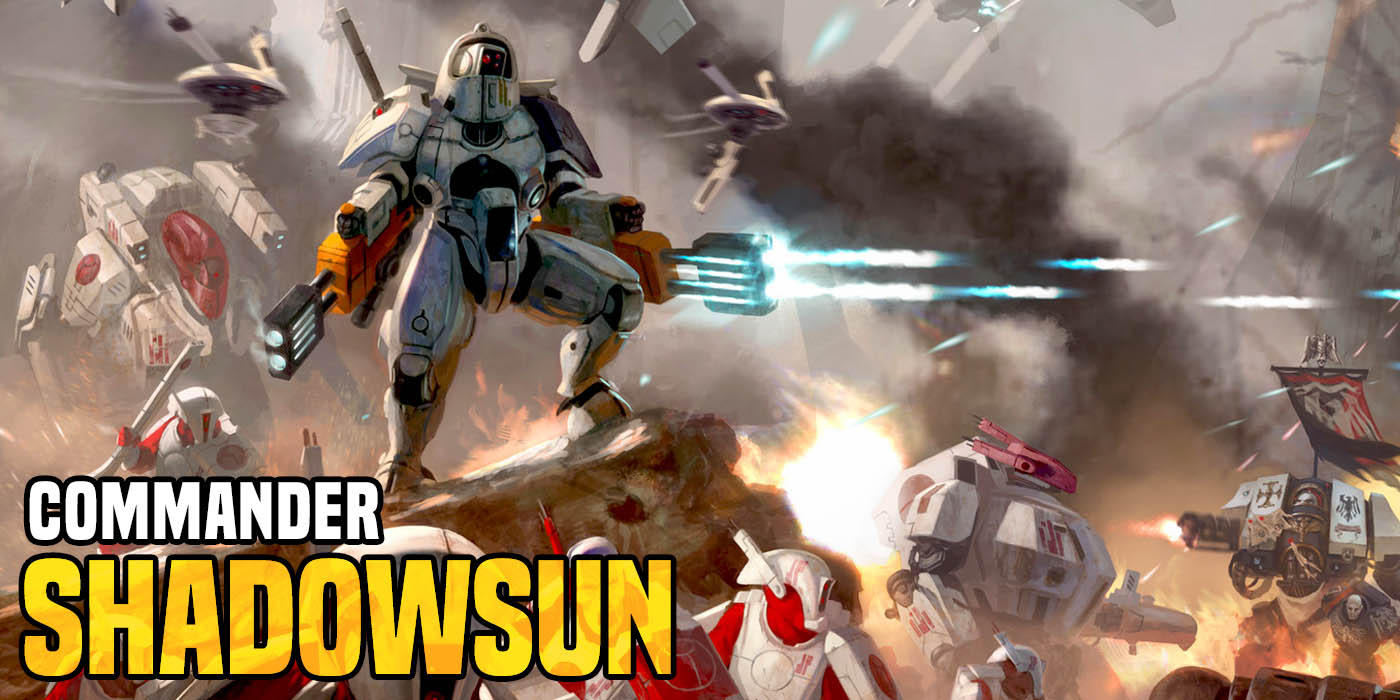 Today we look at the Supreme Commander of the Tau Empire forces, Commander Shadowsun – and what to do with her in 9th Edition.

Commander Shadowsun is a unique character from the Tau codex who wears a custom battlesuit. Since she does not have XV8 armor like other Commanders, her statline is notably different in a number of places. She does come with the usual 8″ movement as well as weapon skill 3+ and ballistic skill 2+, but her strength and toughness are only four (rather than the usual five) since she is effectively a Stealth Suit. Her wounds value is likewise one lower than normal, coming in at five, although this is less unusual. The standard four attacks, nine leadership, and 3+ armor save round out the unit. Commander Shadowsun is accompanied by two unique drones, which have the standard drone statline; her whole unit comes in at 135pts, which is a fairly aggressive price given her suite of abilities.

Unlike many of the other characters, Shadowsun comes with a wide variety of unique rules and equipment, as befitting her unusual combat style. She does have the standard Commander rules as well- For the Greater Good (allowing her to fire overwatch for nearby units) and Master of War (allowing a once-per-game aura). She also has the Infiltrator rule that all Stealth Suits get, allowing her to deploy anywhere on the battlefield outside of 12″ of the enemy deployment zone or models. Similarly, she has a Camouflage Field that protects her and her drones, giving the enemy -1 to hit with ranged weapons. (Note that unlike Stealth Suits, her version does not work in melee.)

Her list of unique rules is similarly comprehensive. Genius of Kauyon allows her to activate her Master of War ability one extra time per battle, though the second one must be using the Kauyon version. Defender of the Greater Good allows nearby Stealth Suits to protect her in the manner of a bodyguard squad, absorbing wounds on a 2+. And her XV22 Stalker Battlesuit gives her a 5+ invulnerable save, a rarity amongst Tau HQs. She also has the Supreme Commander rule that allows her to be included in any Tau detachment without breaking their sept bonus, although since her own abilities only work on Tau sept there is very little reason to ever do so. 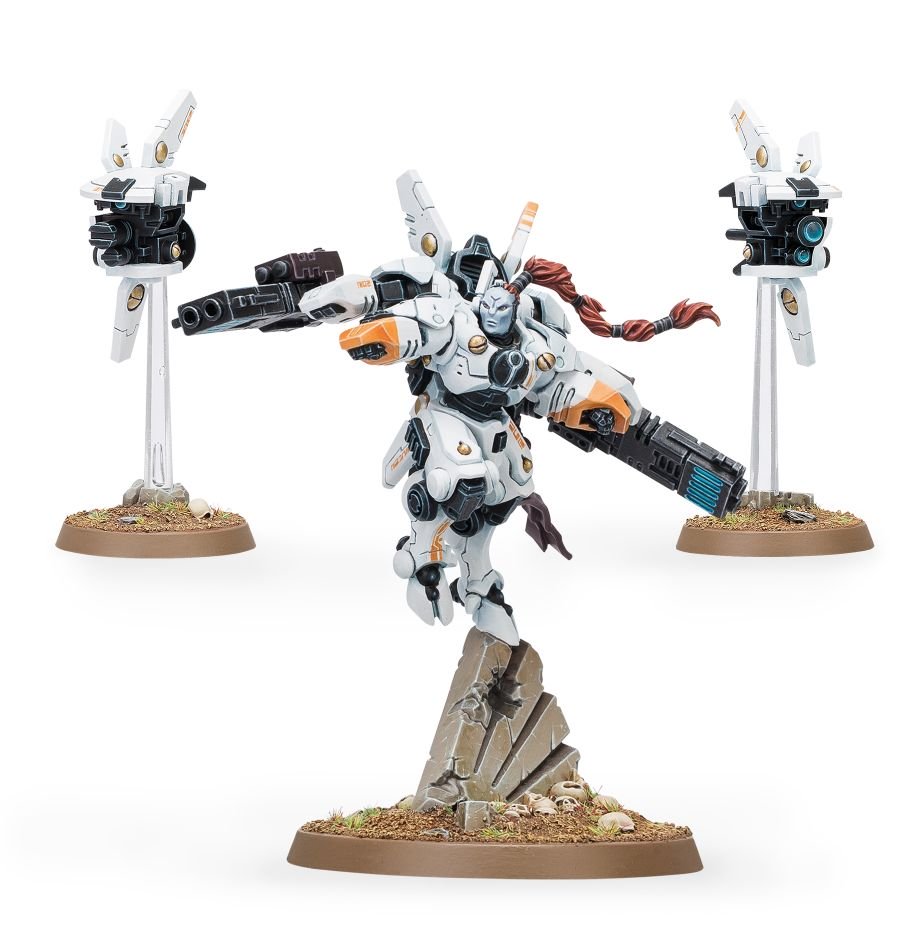 Shadowsun is armed with a surprising number of weapons, some of which can even be switched out. Her primary armament is a pair of Fusion Blasters, which you can choose between High-Energy (24″ S8 AP-4 DmgD6 Assault 1) and Dispersed (18″ S7 AP-4 DmgD3 Assault 2) variants during army creation. Both versions roll an extra die for damage and keep the highest when within half range, and there is no cost to swap between them. The longer range of the High-Energy variant does make it an attractive option, but the Dispersed will generally have higher output against most targets, so unless you are expecting to see a lot of T8 targets I would go that direction.

She also comes with a Light Missile Pod (24″ S7 AP-1 DmgD3 Assault 2) for a bit of punching power against medium targets and a Flechette Launcher (18″ S3 AP0 Dmg1 Pistol 5) for use in dire circumstances. She also has a Pulse Pistol (12″ S5 AP0 Dmg1 Pistol 1) for some reason.

Shadowsun is accompanied by her two drones; the Command Link Drone allows you to pick one friendly unit within 12″ at the start of the shooting phase and give them rerolls on 1s to hit. Her Advanced Guardian Drone comes with a 4+ invulnerable save for itself and when a model within 3″ loses a wound, they can ignore that loss on a 6+. 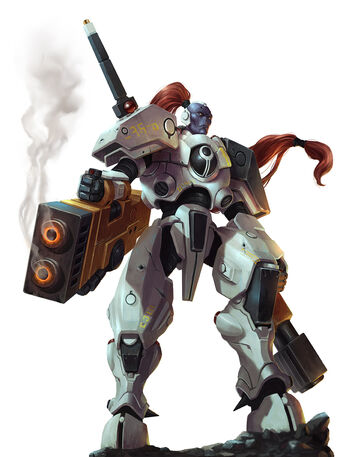 Like Commander Farsight, Shadowsun’s main use in an army is for getting access to the second Master of War activation; however, unlike him she is also able to contribute meaningfully to the action every turn of the battle, making her cost a much more palatable sacrifice. However, she is not immune to the usual problems of Tau and in fact exacerbates them in many ways, making her overall an underwhelming choice.

During 8th Edition many Tau armies leaned on Shadowsun to provide the center of a firebase; with two Kauyon activations giving full rerolls to mitigate the army’s weak ballistic skill, you could put out a large number of accurate shots (from Broadsides or Riptides, typically) and annihilate enemy forces on the first couple of turns of the game, then move forward to claim objectives and take over in the latter turns. That game plan is no longer viable, however, for a number of reasons. The shorter game length, the removal of kill-based scoring, the altered secondary objectives, the new terrain rules, and the enhanced resilience of many modern armies all mean that it simply is not a reasonable expectation to follow this sort of plan, as it puts the Tau player too far behind on scoring and is too vulnerable to disruption. 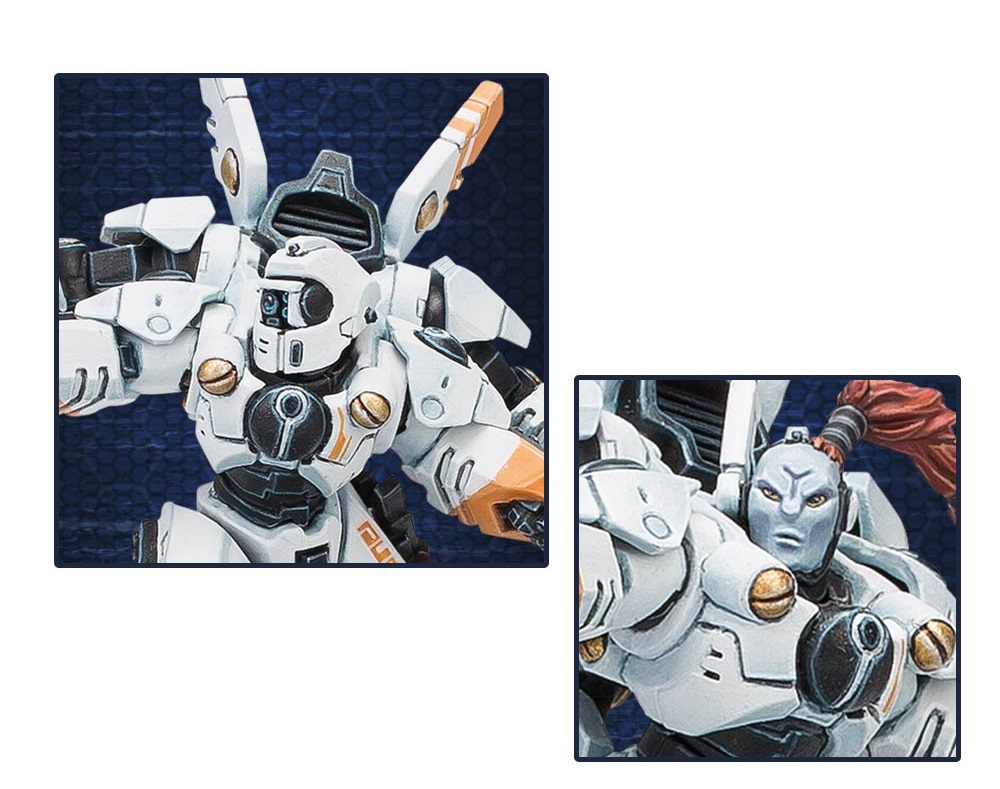 As a result, Shadowsun has largely fallen by the wayside. Sitting completely still with your army for two turns of the game is just not an attractive idea anymore, and absent that Shadowsun underperforms compared to a vanilla Commander. Her weapons loadout is actually fairly decent, being roughly comparable to what a generic counterpart would carry and at a reduced cost, but the issue is that she locks you into Tau sept, which is not where most armies want to be anymore. Though she does still have some unique advantages (such as her alternate deployment and protective abilities), these simply aren’t enough to justify her in most cases.

If you are playing on extremely open boards with a minimum of obscuring/dense terrain, a Shadowsun-based army can potentially have some legs- she still brings a large amount of raw firepower to the table, and if you are able to leverage that consistently it is possible to make good use of her.

Commander Shadowsun illuminates one of the major problems with the Tau codex- even the “good” units in it simply don’t function for the most part in 9th Edition, because they are attempting to play a version of the game that no longer exists. 9E is all about scoring, mobility, and resilience, and Shadowsun and her friends simply cannot compete in those arenas in any meaningful way. It isn’t even that she is one-dimensional, as she actually has a wide variety of abilities to support various playstyles, but none of the things she does can be followed through to a successful game plan in most cases, so she ends up being just another disappointing shelf weight.

As always, remember that you can get your wargaming products at great discounts every day from the Frontline Gaming store, whether you’re looking to start a new army or expand an existing one.