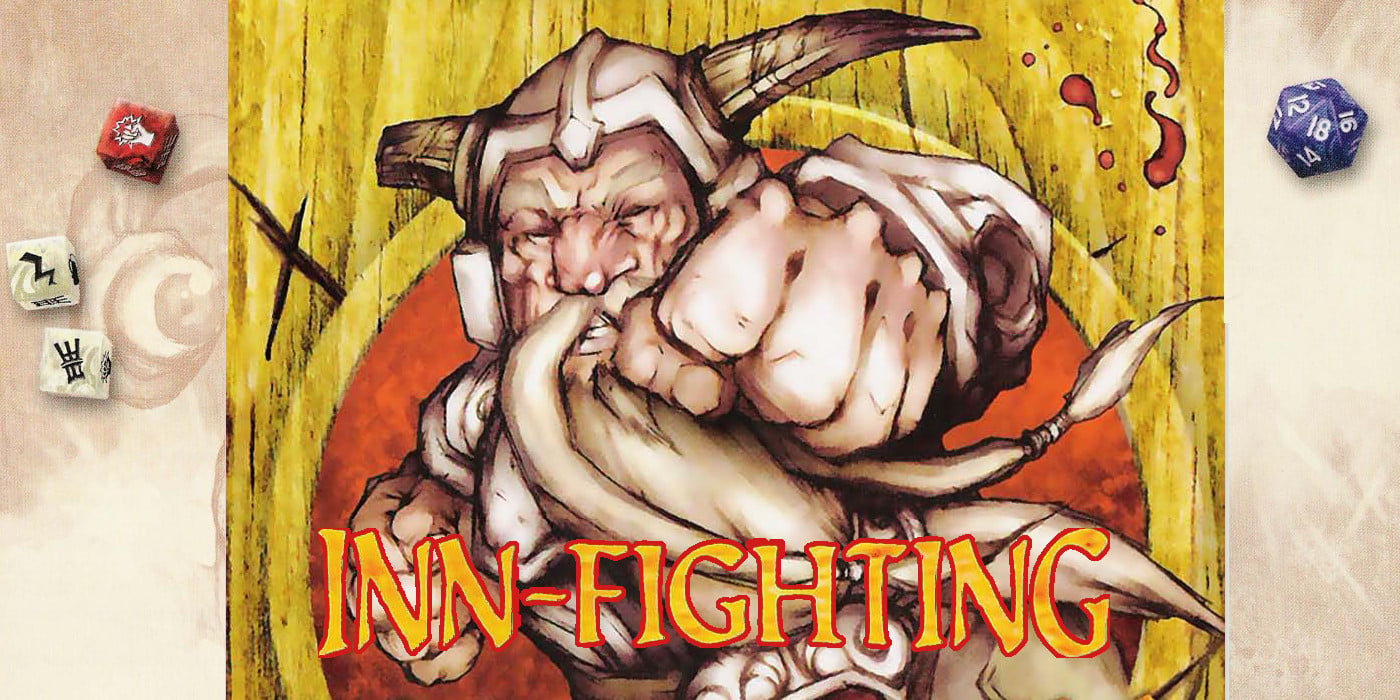 If you’re looking for a way to shake up combat, Inn-Fighting is a great option. If you can find it!

There are plenty of official D&D games out there. Wrath of Ashardalon, Dragonfire, Tyrants of the Underdark, and the like. But then there’s a different class of game which feels somehow separate from those. I’m talking about games like Three Dragon Ante, but more specifically games like Inn-Fighting. 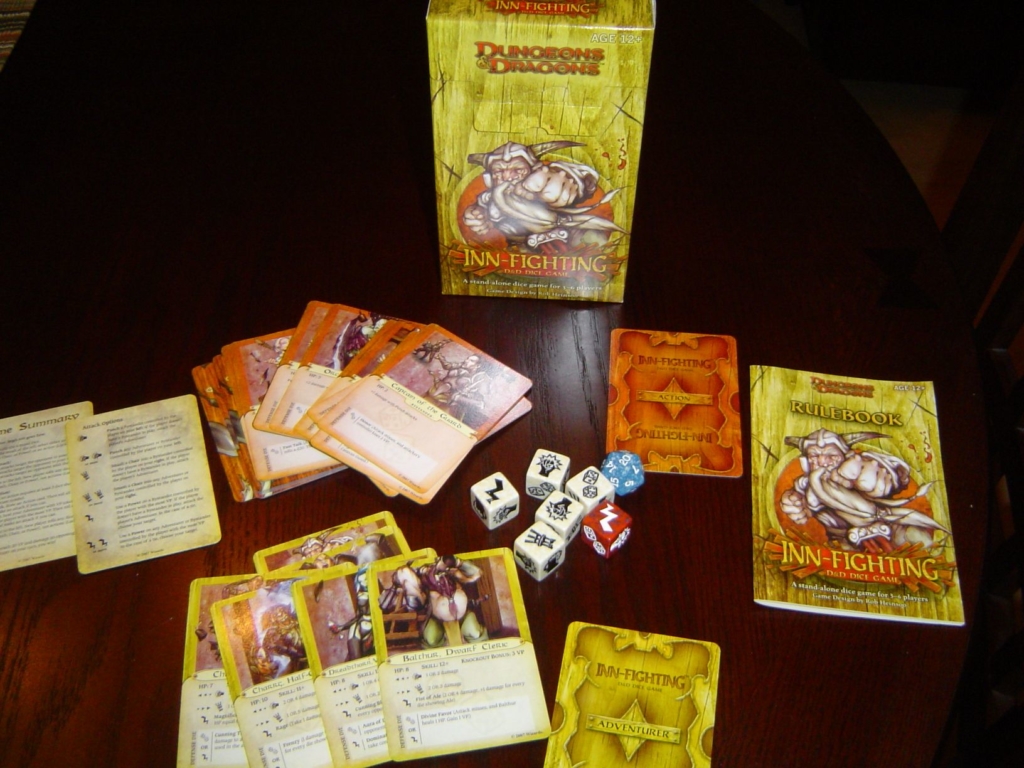 Inn-Fighting is the official D&D competitive dice game about the chaos of a bar brawl. The goal of each player is to the be the first one to 20 VP. VP are gained by beating the tar out of everyone else! The players each begin with an Adventurer card, which will have some unique stats and abilities, and 2 Action cards, which can be either Bystanders or Action cards. Bystanders works like allies to the player who played them, and will provide some passive bonus, as well as another face to punch. Action cards provide a variety of one-time effects, as dictated by the card itself.

On each player’s turn, they roll the dice. There are 5 different symbols that can be rolled. 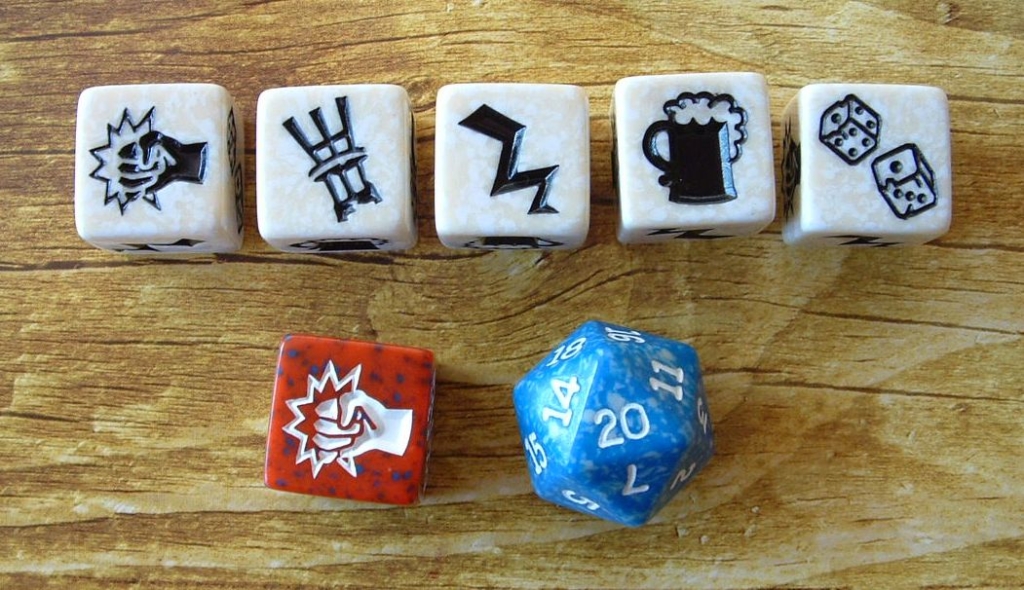 After each player takes their action, the Ale and Luck results are left on the table, and the remaining dice are passed to the next player. In this way, You can be sure someone will eventually get to take the Ale and Luck actions.

If an attacker only rolls 1 Fist, Chair, or Power, they must attack a Bystander, if available. The Bystander gets to roll the red Defense die in an attempt to protect themselves.

When making an attack using Fists, Chairs, or Power, the attacker follows the roll with a d20 roll, then adds the number of symbols of the attack to the d20 result. This number is checked against the Skill value of their adventurer. If the result is greater than the Skill value, the attacker deals the higher amount of damage listed for that attack on their card. Otherwise, they do the lower amount of damage.

However, if a player ever takes 3 or more damage from a single attack, or would be knocked out by an attack, they get to roll Defense. They roll the red die and try to roll one of the symbols in their Defense section, and apply whatever the effect is.

Each time a player deals damage, they take the health tokens from whoever they damaged and gain them as VP. The first player to reach 20 VP wins the brawl!

Inn-Fighting is absolutely a chaotic game. Don’t expect a whole lot of strategy and careful planning. It’s a bar fight, after all! But that doesn’t mean it’s a bad game. It does what it sets out to do expertly. So, go grab yourself a copy from your FLGS right now?! Well…. 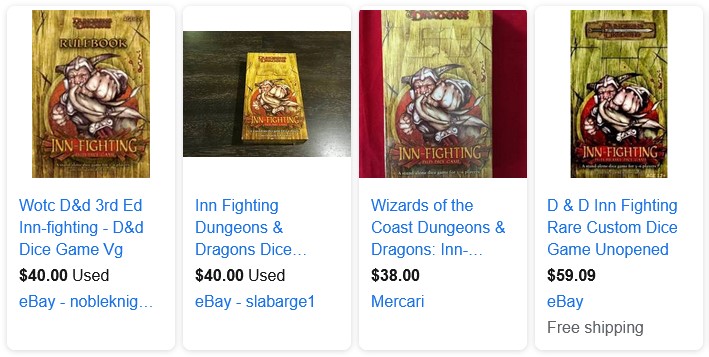 Thing is, this game is out of print and fairly rare. There are copies floating around and it’s not super expensive to get. But for what is ultimately just a silly dice game, it’s just outside what I would consider a reasonable price. Still, if you don’t mind spending a little outside the reasonable limits, it’s absolutely worth picking up the next time you wanna try something different when your PCs get into yet another bar fight.

Author: Matt Sall
Matt has loved games of all kinds his whole life: board, video, war, roleplaying. He's worked as a writer for BoLS since 2017. He's worked as freelance editor for board game rulebooks and has designed many of his own games as well.
Advertisement
Board Games Dungeons & Dragons Rules Tabletop News
Advertisement