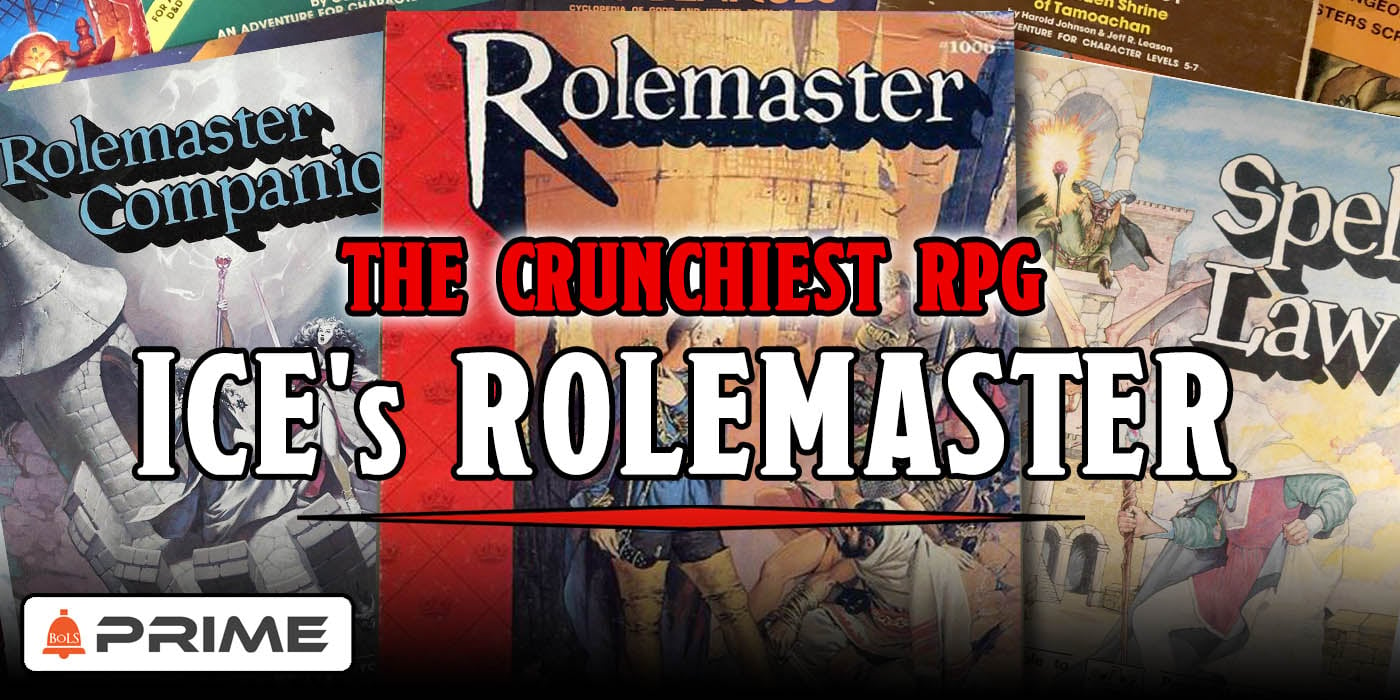 The early days of the roleplaying game industry were a wild barrage of scattered ideas that tried to capture the lightning in a bottle that Dungeons & Dragons had. We’ve talked before about five of the D&D-alike games at the time that offered their own spin on either slimming down or riffing on the existing D&D paradigm. But a rare few games tried to break new ground, developing new ways of playing–including mechanics that carry through to modern games today, from big-name games like Shadowrun to the smallest indie games, you can find the bones of those early games. 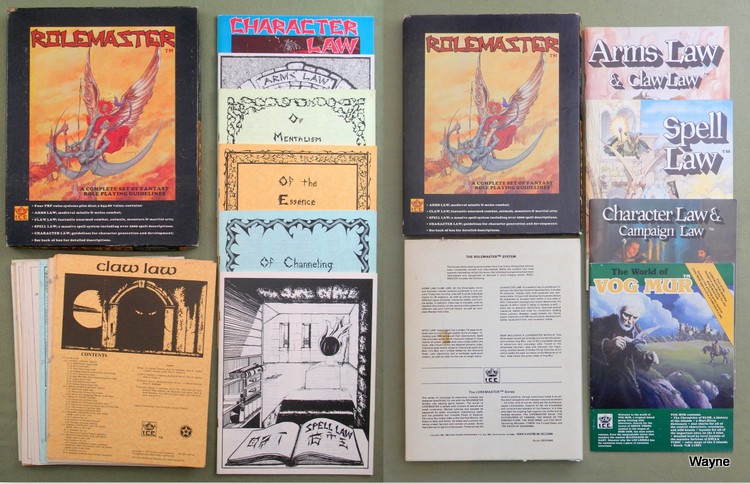 Especially if those bones happen to come from Rolemaster, which has been alternately called Rulemonster, Chartmaster, and Rolemathter by people who are, ostensibly, fans of the game. In an age when roleplaying games tried to model the world with rules, systems, subsystems, and charts, Rolemaster tried to push everything to the limits, doubling down on detail and complexity to the point that it built a reputation for being almost unplayable.

Almost. But for all that, Rolemaster helped spawn some of the most beloved RPGs out there, including the legendary Middle-Earth Roleplaying System. And it all begins in the halcyon days of the late 70s, when Dungeons & Dragons had kicked off an entire industry and a renewed interest in books like Tolkien’s Lord of the Rings trilogy swept the country. 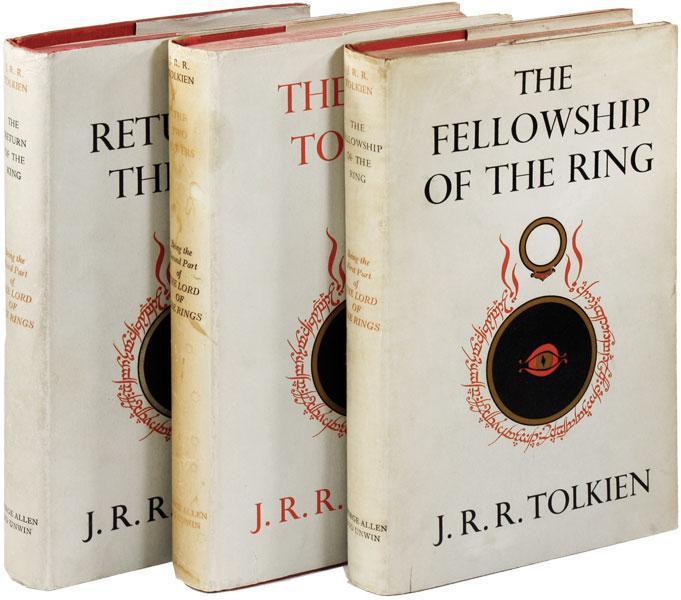 Like most game companies that sprouted in the early post-D&D era, the company that would go on to make Rolemaster starts with a college-aged founder who took a healthy interest in Dungeons & Dragons. In this case, our story begins with Pete Fenlon, the founder of Iron Crown Enterprises. Like many of his contemporaries, when Fenlon was in college, he ran a six-year D&D campaign set in J.R.R. Tolkien’s Middle-earth, which is a tricky legal situation, but is also at the heart of the origins of this system.

Fenlon’s love for all things Tolkien would even give the company its name; Iron Crown Enterprises took its name from the Iron Crown that Morgoth Bauglir forged in order to hold the Silmarils before he was banished from the world. The nascent company had big ideas but a small bank account. 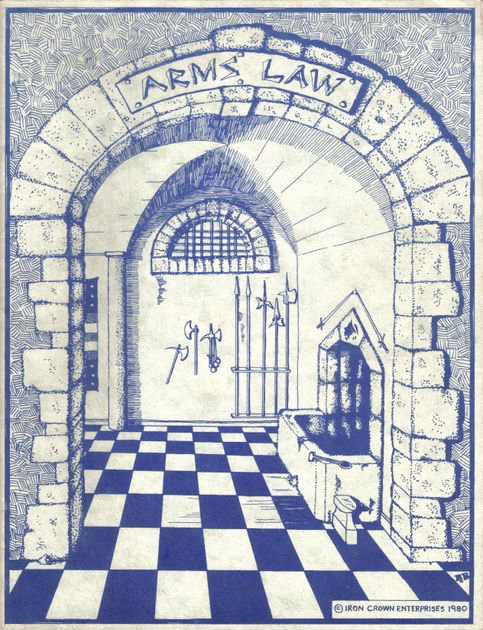 Fenlon’s D&D group decided to take their own set of house rules and turn them into a business endeavor with Fenlon being joined by friends S. Coleman Charlton, Kurt Fischer, Richard Britton, Terry Amthor, Bruce Shelley, Bruce Neidlinger, Heike Kubasch, and Olivia Johnston–though the company’s rocky start would see the company lose four of its initial founders (dropping from 10 to 6). Still, the newly forged Iron Crown Enterprises looked to find their footing with the release of Arm’s Law, their codification of the group’s house rules for D&D. Arms Law was their first foray into publication, and the “alternate combat rules for D&D” helped the new book find an audience of gamers who seemed hungry for more complexity.

Here we see the first set of rules that would eventually become Rolemaster–though at the time, Arms law existed as an alternate set of combat rules to AD&D’s rules. Not long after the initial release, Arms Law solidified its reputation for complexity, and it’s not hard to see why. Every weapon came with its own chart which could be cross-referenced against armor type to show the different results for different kinds of hits. The game eschewed the typical d20 roll for a more precise percentage-based system that introduced “open” or “exploding” die rolls that allowed results above or below whatever numbers show on the die.

Rolemaster introduced a ton of skill-based customization rules as well, allowing characters to develop standard “classes” in ways that reflected both their own playstyle and roleplaying accomplishments–and if that sounds familiar you’d be right. Games like Shadowrun or the World of Darkness owe their mechanical existence to some of the ground broken in Rolemaster supplements. 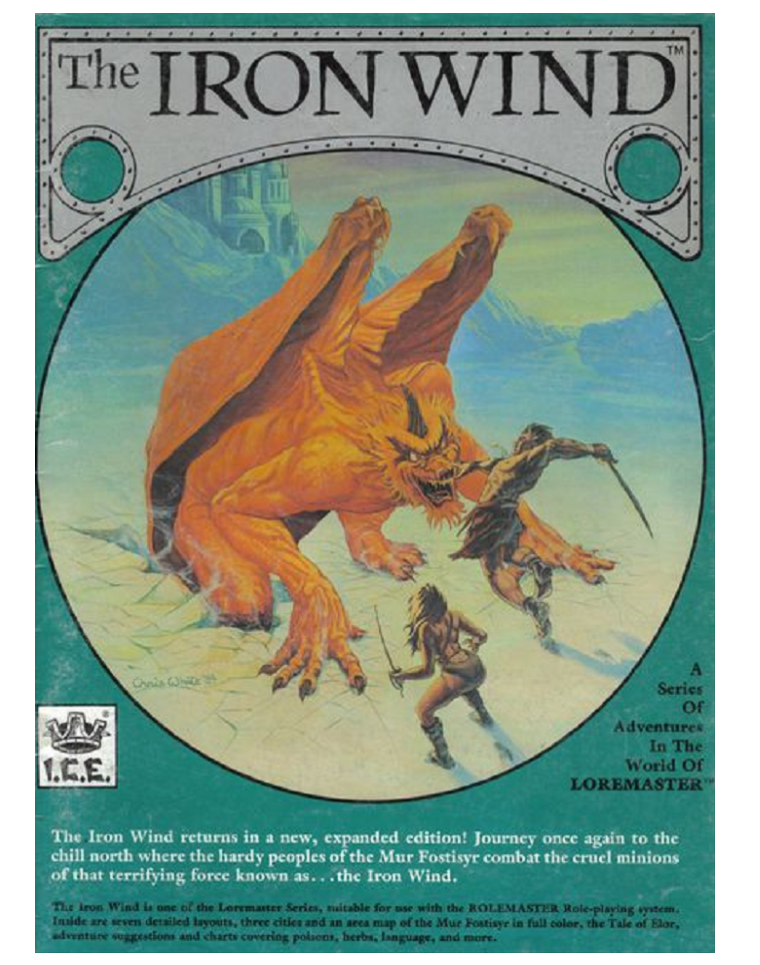 The success of Arms Law, led Iron Crown Enterprises to put out a second big release, The Iron Wind, which was more of a system-agnostic campaign setting set on a fantastic island which was extensively mapped out, so that GMs could pretty readily put together encounters and dungeons. And through it all, Rolemaster’ starts taking shape. And when it’s released, Rolemaster is a success. It’s careful simulation of real-world events found an audience hungry to more granularly represent certain aspects of the game through elaborate rules. 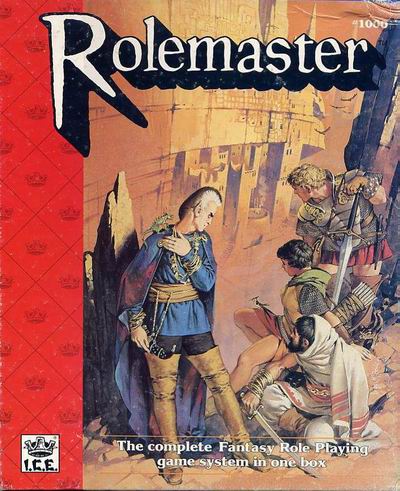 Which makes sense from a certain perspective. In the late 70s and early 80s, games were especially about modelling/simulating whole worlds through their game mechanics. And Rolemaster promised and delivered exactly that. And fresh off their success, Iron Crown successfully approaches Tolkien Enterprises with a request for the Hobbit and Lord of the Rings licenses. And according to the Tolkien estate, the whole reason it was even up for grabs in the first place was that no one asked. From here ICE grows into the world of Middle-Earth, and a legend is borne.

Eventually ICE would be caught in the collectible card game disaster that both tanked and saved RPGs, and would finally shutter its doors in 2000–but for 20 years, Rolemaster touted “rules not rulings.”

Author: J.R. Zambrano
Bell of Lost Souls Staff Writer and DM, J.R. covers RPGs of all stripes and on occasion eats sandwiches. You can ask him about either at [email protected]
Advertisement
Lore Retro Games RPGs
Advertisement 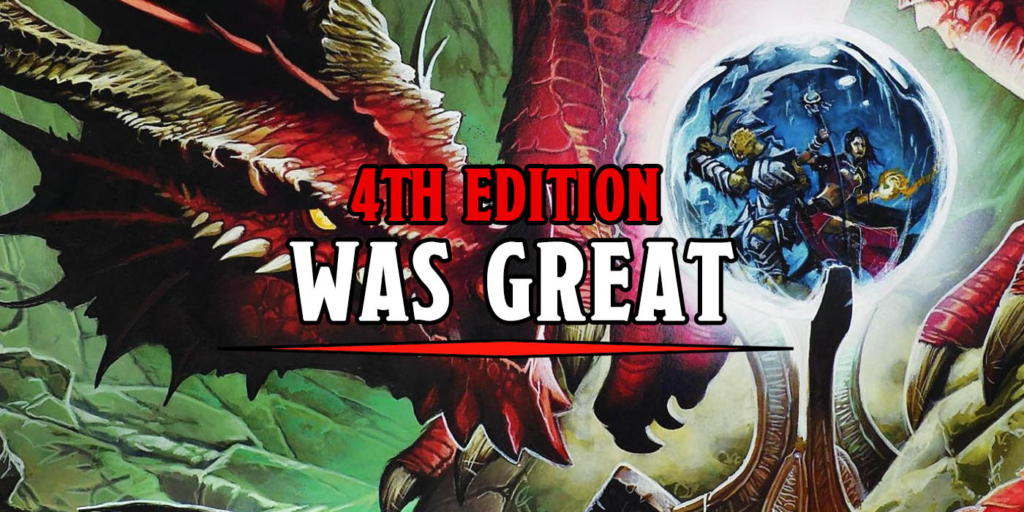