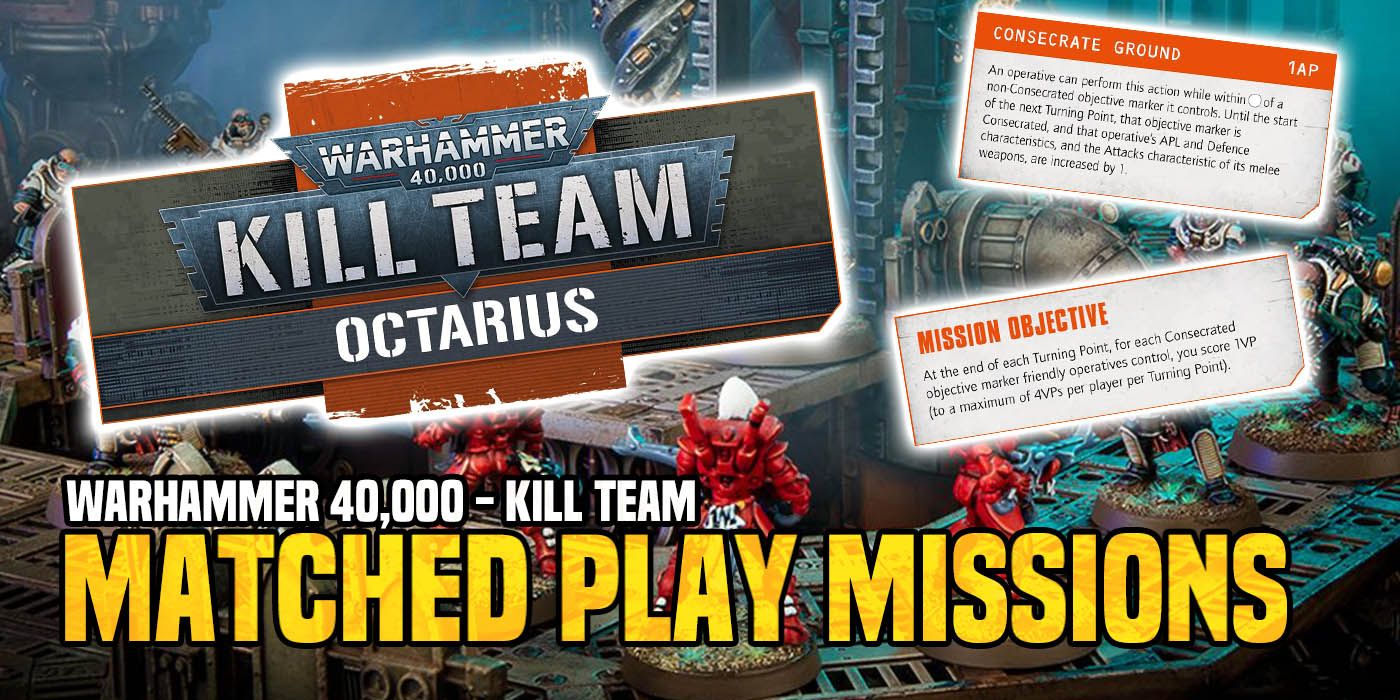 The new Matched Play missions in Kill Team are going to be tactically challenging and interesting to attempt – better bring the right operatives!

Warhammer 40,000: Kill Team has been completely reworked. Everything from the basic statlines, to the rules, to the wargear, list building, and even the missions have gotten changed from the previous iteration. How did they change and what’s the impact going to be on your list building and matched play? That’s what we’re going to be taking a look at today.

“Matched play is a game mode that focuses on providing the most mechanically balanced games possible, ensuring that you and your opponent have a level playing field to test your strategic nous against each other. The strategic decisions begin before your models even hit the tabletop, so you’ll need to bring your A game to emerge victorious on the battlefields of Kill Team.”

There are nine missions to choose from in matched play and within those missions you’ll find a wide array of objectives and special actions you’ll need to utilize. These missions can dramatically impact how you’re going to have to play in order to score those objectives as well. That means bringing the right Operatives is going to be critical to completing you mission. Thankfully, you’ll be able to select your operatives AFTER the mission is chosen. 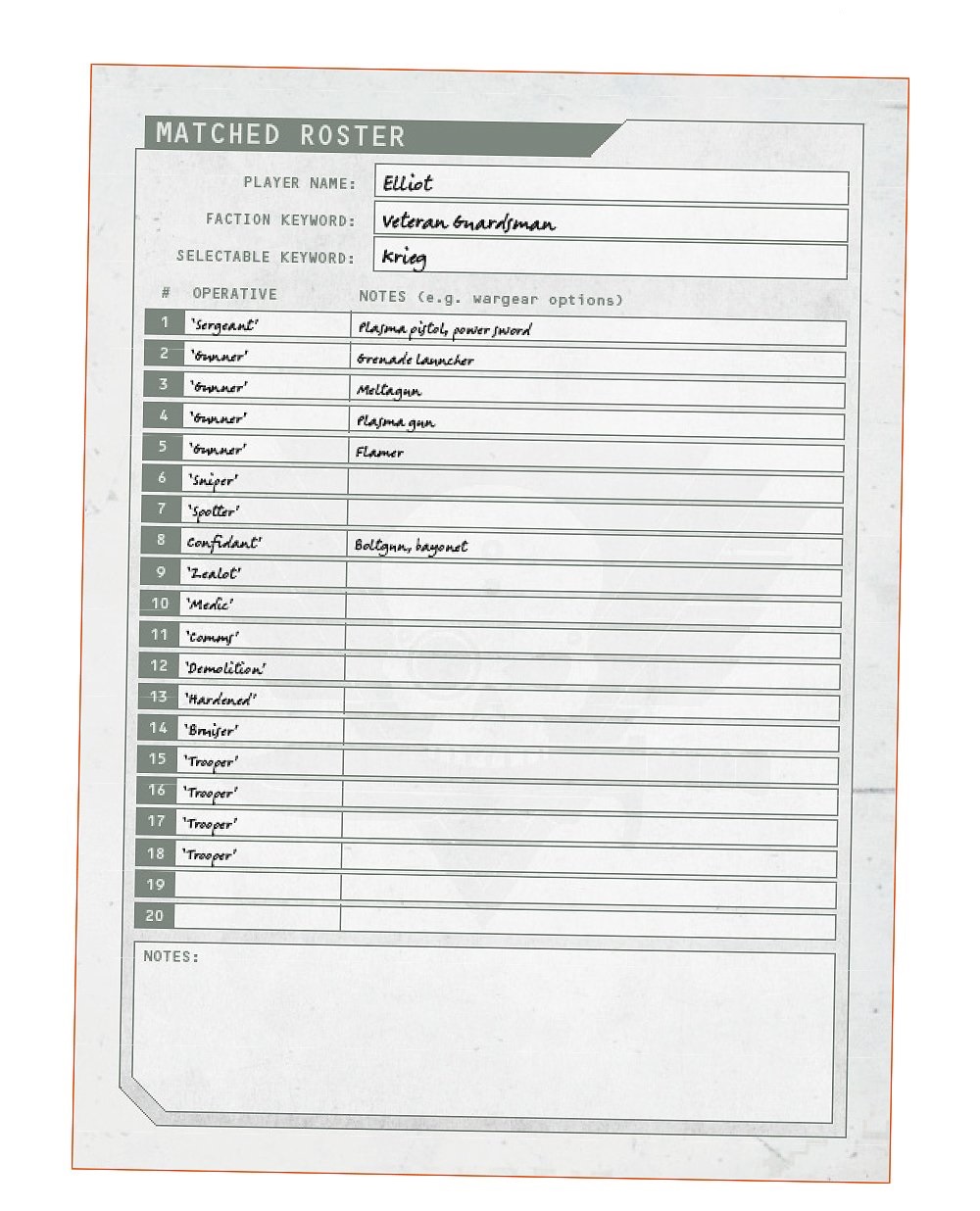 Suddenly, having a roster with 20 slots is making a lot more sense.

It’s going to be important that you bring a wide array of tools in your tool box for these matched play missions. Specialists for armor-cracking, sniping, and even having someone with the ability to move quickly around the board will be very handy.

So now that you’ve got your roster assembled, what type of missions should you expect? Well, we’ve got a few examples so let’s check those out next.

Concentrated Ground, as a mission, will force players to go after the objectives. Not only are you going to be racking up the VPs by doing so, you’re Operatives will get a significant boost to their APL, Defence, and Attacks. Snag those objective quick to get the lead and use those boosts to help you KEEP them.

Again, you’ll get to choose which Operatives actually hit the tabletop AFTER you find out which mission you’re taking. And you and your opponent both get to which faction the other is taking before you choose your own operatives. This means that, yes, Kill Team is going to have a strong meta game for matched play right off the bat. Having lots of options means there is lots of room for mind games to mess with your opponent. And the metagaming doesn’t stop there. 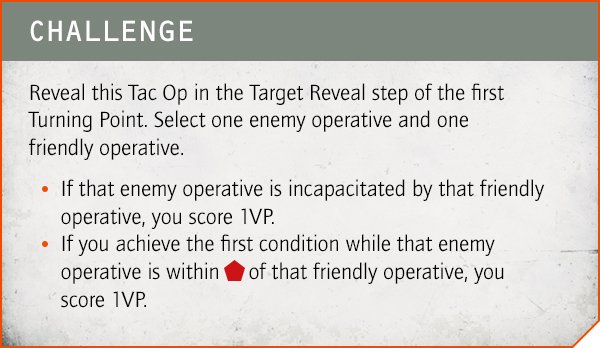 “With the mission decided and the kill teams chosen, commanders pick which Tac Ops they want to try to score for extra victory points. Tac Ops are secondary objectives that are generated in secret, forcing your opponent to guess what you’re trying to accomplish during the game.”

These secondary objectives are chosen by player and not revealed until the Tac Ops says to reveal them. These will keep your opponent guessing and in the dark as to what you’re trying to accomplish. Why is that random Operative making a mad dash across the board solo? Maybe they are an Interloper: 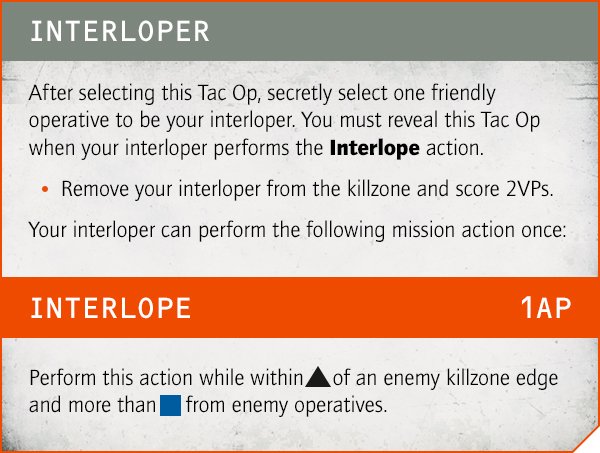 Gee, would there be a good counter-pick to go after a solo target like that? There is – I hope you chose it beforehand… 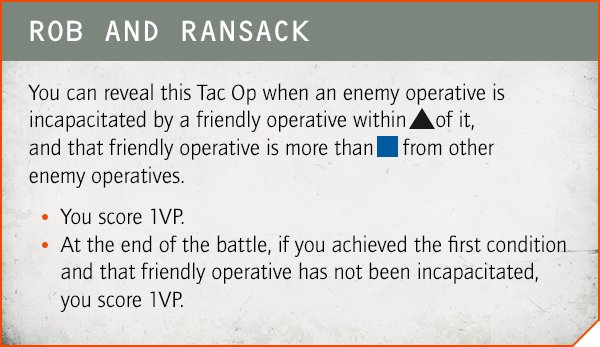 These are just a few of the Tac Ops you’ll be able to select during your missions. With nine missions and lots of various Tac Ops to choose from, each game is going to be different and challenging. Is your Kill Team going to be prepared?

Do you like the roster system and getting to choose which Operatives you want to use for a particular mission? What about the missions and Tac Ops?