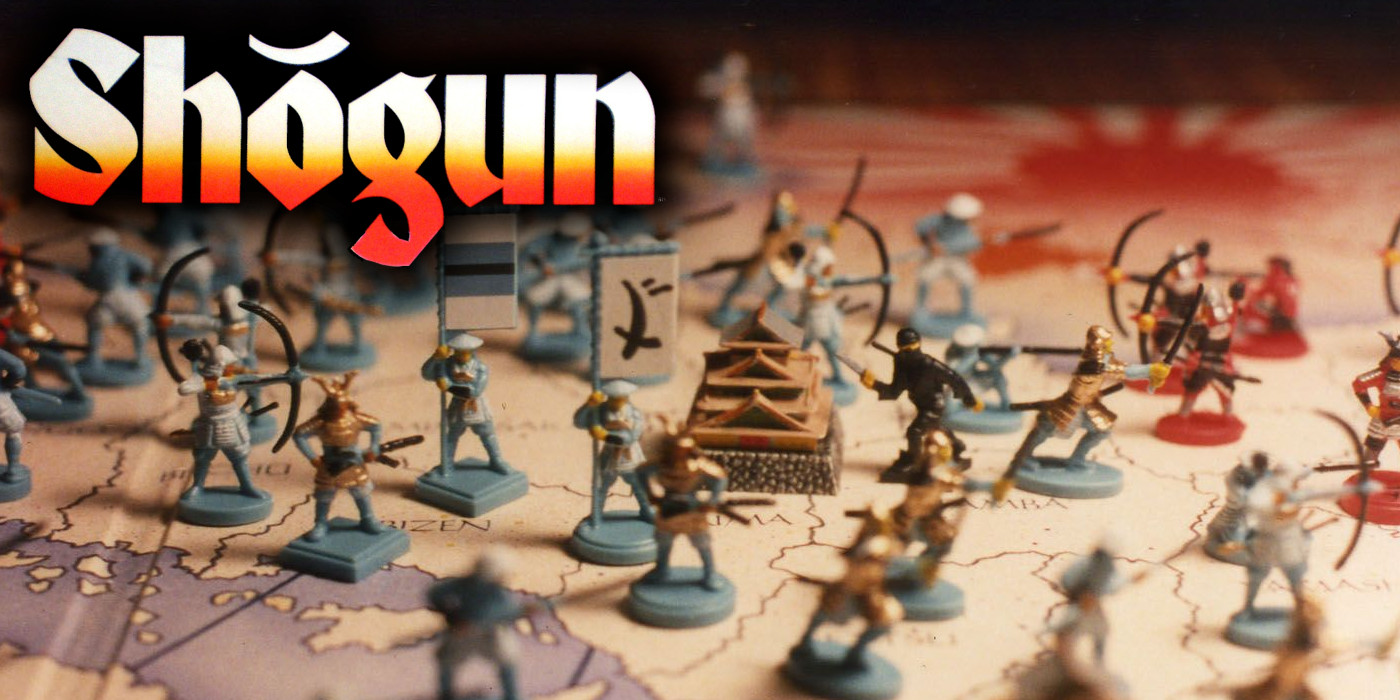 When players complain a game is too simple, they don’t realize how good they’ve got it. They could be playing the Shogun board game.

Today we continue our journey into Milton Bradley’s Gamemaster series. We’ve already looked at Conquest of the Empire and Broadsides & Boarding Parties. Today we are taking a closer look at the second most complicated game in the series, the Shogun board game. 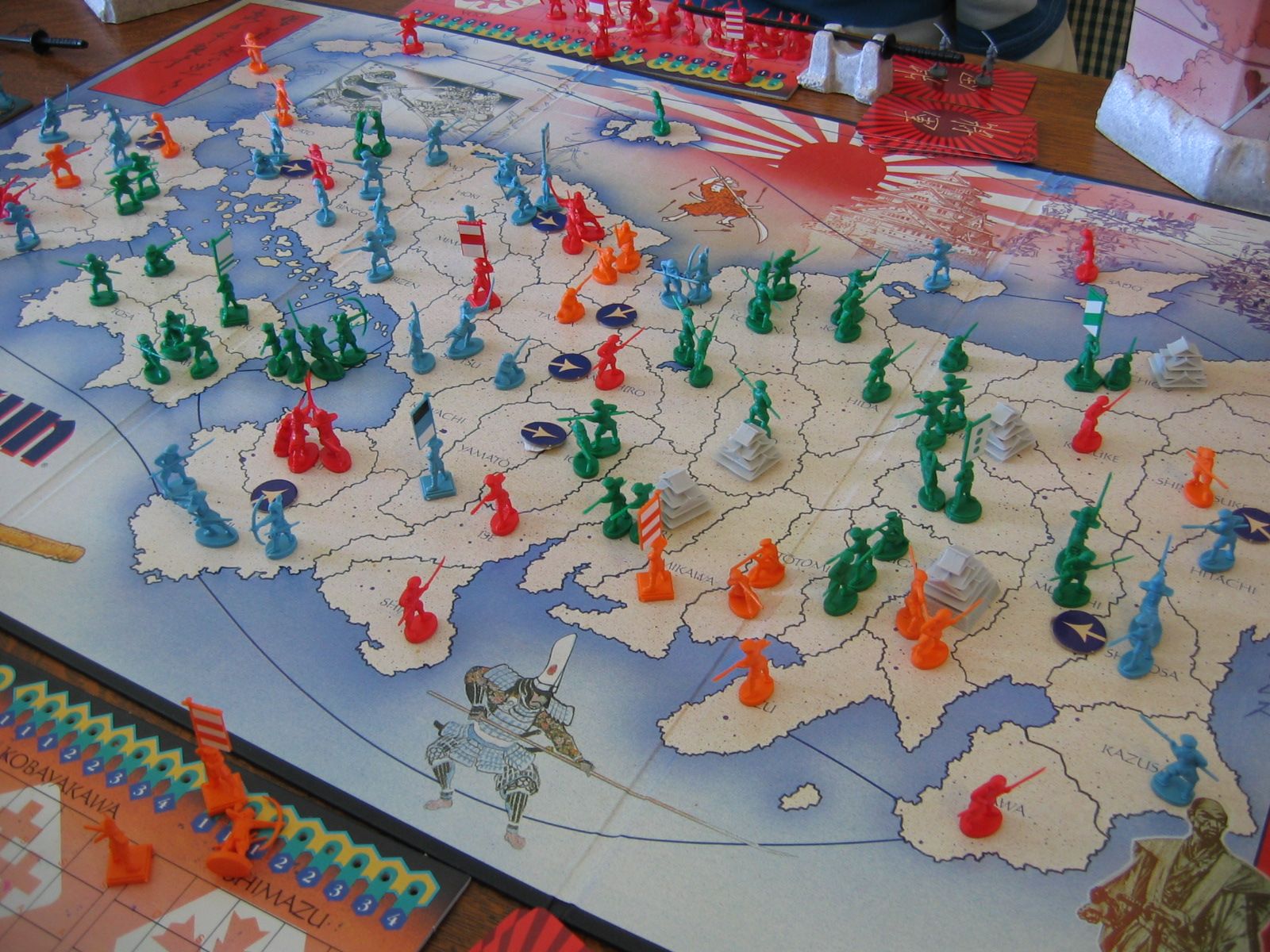 This game has suffered a few identiy crises over the years. Originally released in 1986 as Shogun, then again in 1995 as Samurai Swords, then again in 2011 as Ikusa, Shogun clearly is enjoyed enough to warrant 3 separate printings.

Like many of the Gamemaster games, Shogun is a competitive strategic territory control game sitting on a Risk foundation. But Shogun takes that basic gameplay and adds a ton of additional mechanics, making this a much heavier game to digest.

The overall objective for each player? Be the first player to control 35 provinces. But along the way, players build castles, hire secret Ronin warriors, and bid to earn a favor from the Ninja assassin. 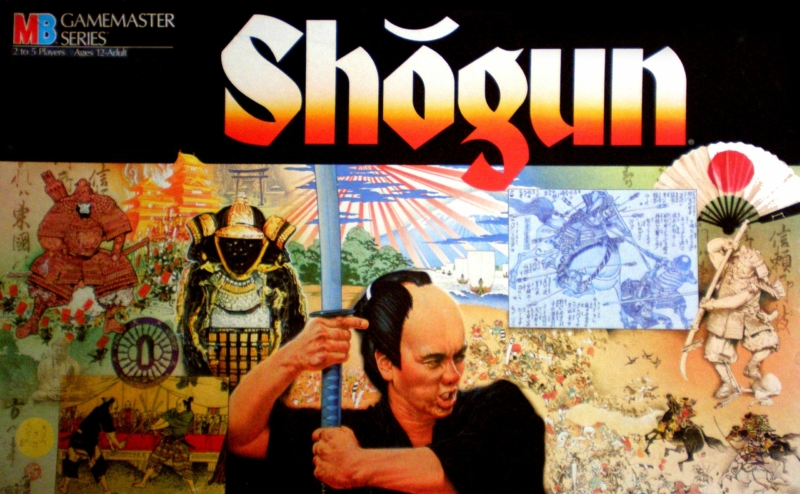 How to Play the Shogun Board Game

At the start of the game, the provinces on the board are all divided equally and randomly among the players. Each player distributes their starting forces throughout their starting provinces.

But what immediately sets Shogun apart from Risk? Unit stacking is not allowed during setup. It’s also severely limited throughout the game.

That means there are no deathballs of units easily rolling through enemy territory. Already a great improvement.

Each round begins with a bidding phase. Players bid their money, here called Koku. You can bid for turn order, building, hiring units, hiring Ronin, and the Ninja. Each player has a screen protecting the tray where they will be placing their Koku. 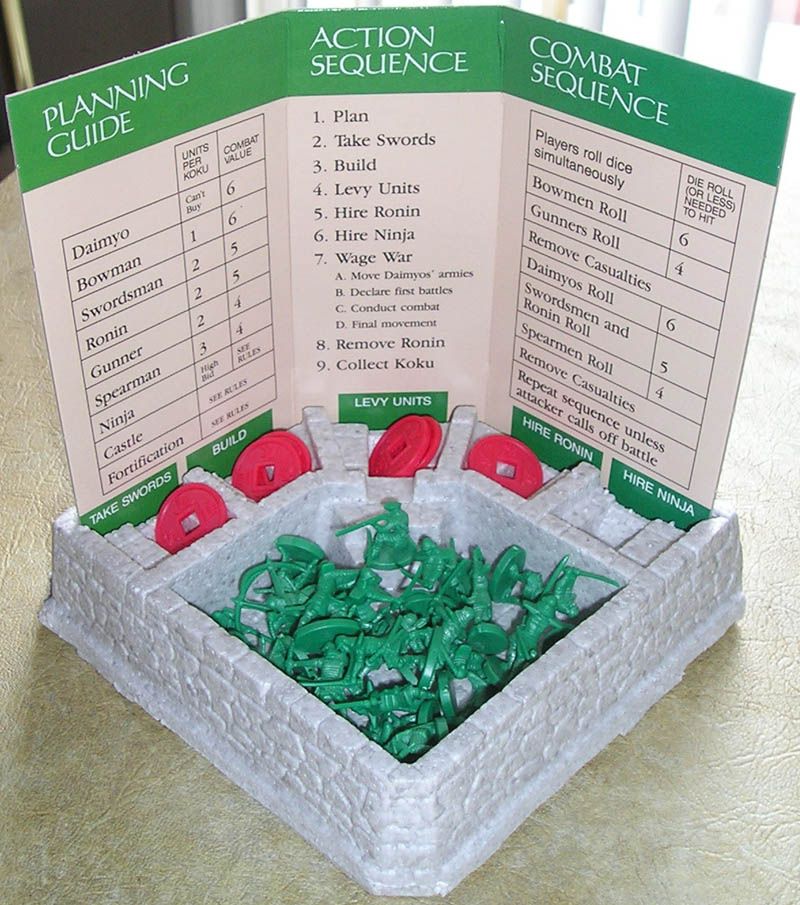 The Units of Shogun

There are a variety of different units in the Shogun board game. Each unit has a specific combat strength, which determines what value they must roll under in order to score a hit in combat.

Additionally, the ranged units, bowmen, and gunners get to attack and allocate casualties before the other melee units. When buying new units, only 1 unit can be played in a territory each round. So forces will be fairly spread out. 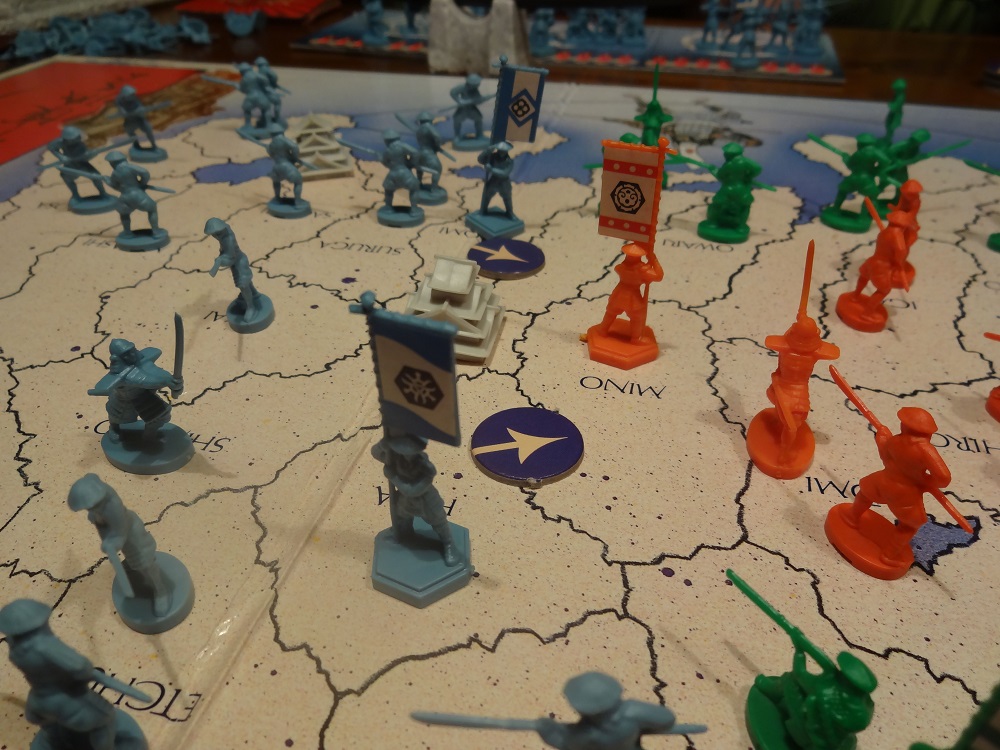 Each player starts with 3 armies. Armies are tracked on an army card, separate of the units placed directly on the board. The army is represented on the board by a figure holding a banner.

Each province can only have 5 units at any one time. Armies allow players to move greater number of units around at once. They are lead by a Diamyo, which is the strongest single unit.

On top of that, players can hire Ronin. When this is done, the player who hired them gets to secretly deploy them onto the board.

They do this by taking the province card where they wish to deploy them and place the card facedown with the Ronin figures on top. The other players know how many Ronin you’ve deployed, but they won’t know where until you reveal them. 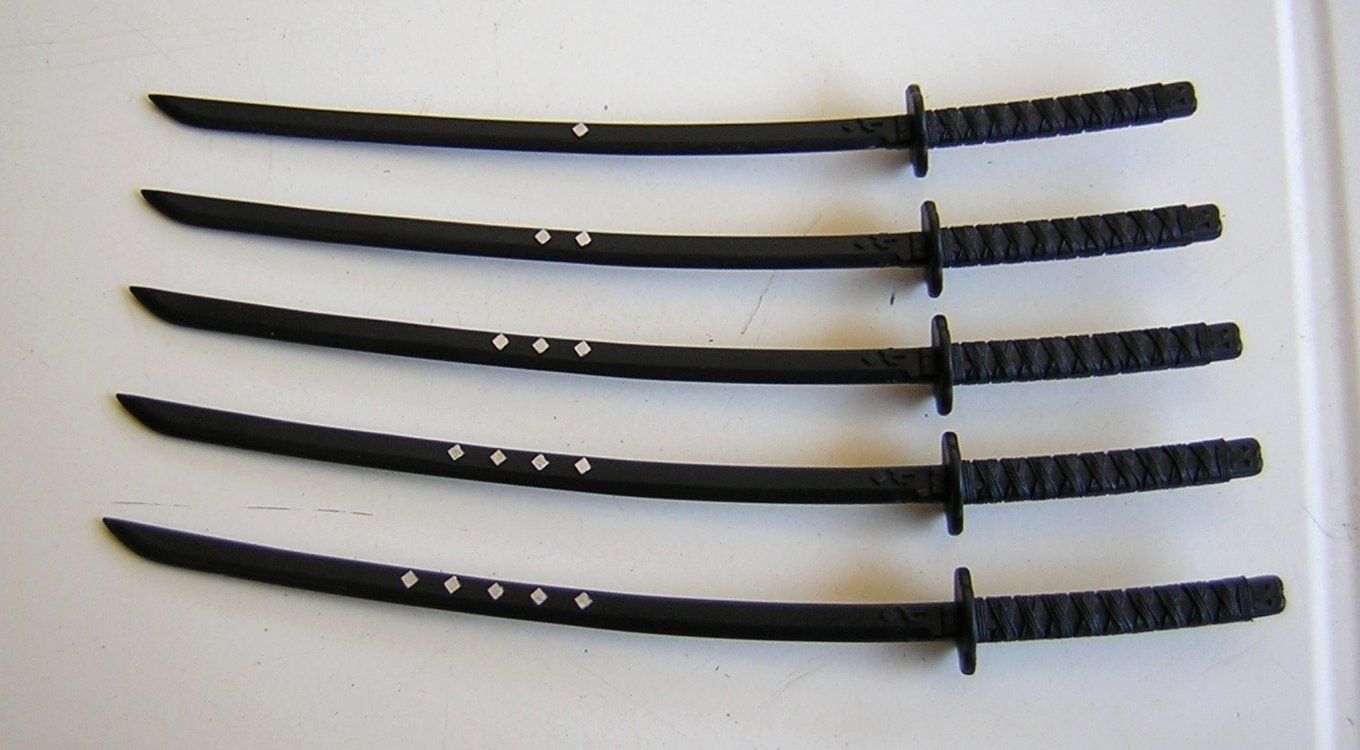 Older version of the game had these katana to use as turn order tokens. Best game component ever!

The last unit to know is the Ninja. There is only one Ninja so players will have to bid for the Ninja’s services in the Shogun board game.

The player who bids the highest can order the Ninja to assassinate an enemy Diamyo, or to peek at another player’s bids during the first phase of the round. Then they can change their bid after gaining that new information. Either way, a valuable bonus.

Finally, players can build castles or upgrade a castle to a fortress. Either way, these building provide “bonus” units while defending in that territory. There are always 4 units available in that territory each round. Either Spearmen for a castle, or Ronin for a fortress. 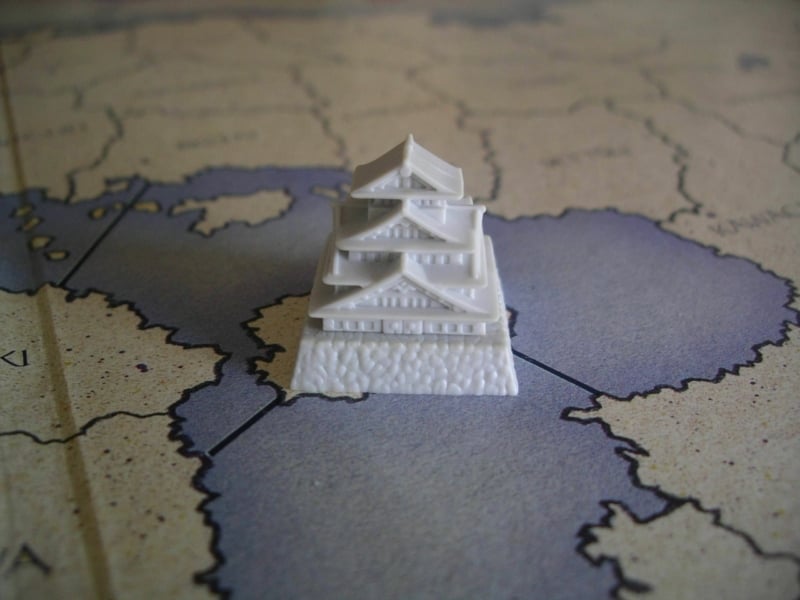 The first player to control 35 provinces is declared the Shogun and wins the game!

The Shogun Board Game Review

Shogun is actually a much slower version of Risk, for better and worse. Risk allows for huge swings in power with each turn, thanks to how easy it is to buy new units and how you can stack all of them in a single territory.

The Shogun board game does away with these things and makes for a much slower and more methodical game. This in turn, makes it much more strategic– but again, it makes games take a lot longer.

Games can take up to 4 hours, especially with higher player counts. This can be a bummer when your enemy is clearly starting to gain ground faster than you can win it back.

At least in Risk, the game can be over quickly. And mechanics like Ronin and the Ninja ensure players are never without a glimmer of hope. But that might just be a fancy word for “delaying the inevitable”.

Overall, the Shogun board game is a much heavier, deeper game than Risk. And that brings pros and cons. But if you’re the sort of person who played Risk and was hoping for something more methodical, Shogun/Samurai Swords/Ikusa is just the game for you!

Author: Matt Sall
Matt has loved games of all kinds his whole life: board, video, war, roleplaying. He's worked as a writer for BoLS since 2017. He's worked as freelance editor for board game rulebooks and has designed many of his own games as well.
Advertisement
Board Games Game Design How to Play Retro Games
Advertisement 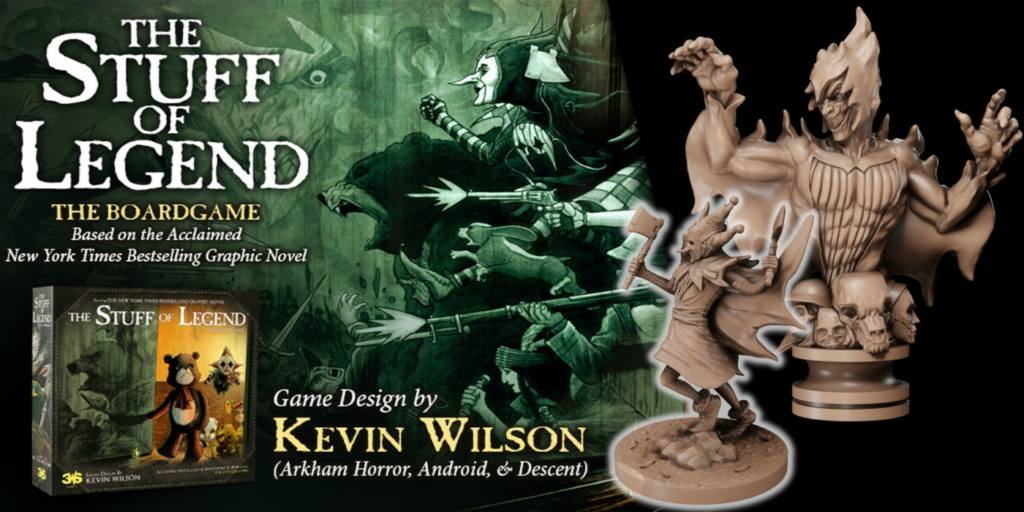