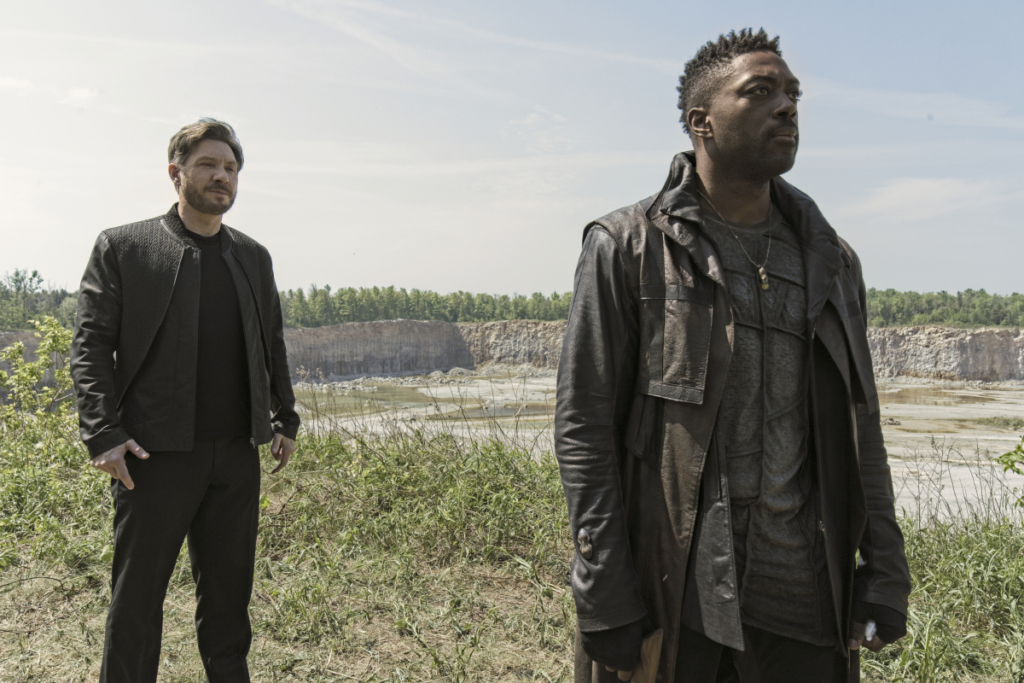 As Discovery heads to make first contact with Species 10-C, we (finally) get Tarka’s backstory in “The Galactic Barrier”.

Are we all familiar with the concept of the “ship in a bottle” style of TV episode? These are episodes where most, if not all, of the story is set onboard the ship, thus removing the need to build extra sets and spend more money. Star Trek has plenty of these kinds of episodes. Star Trek: The Next Generation even went so far as to have an episode called “Ship in a Bottle“.

This week’s episode of DISCO “The Galactic Barrier” could have been titled “Ship in a Bubble”. The ship literally travels from one red, bubble of safety to another as it makes its way towards 10-D space. And, as was the case with the previous two episodes, it isn’t the plot points that are shifting so much as the character motivations are.

You can feel DISCO‘s writers stalling on the Species 10-C reveal at this point. On the plus side, though, the story behind Ruon Tarka is one of the most solid we’ve seen this season. 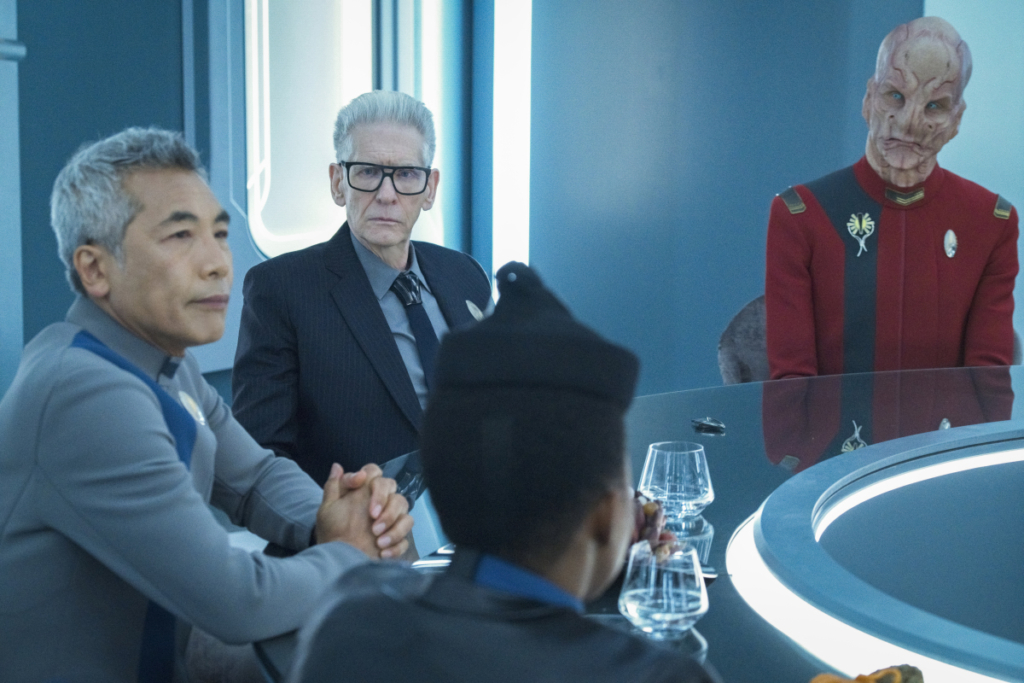 Species 10-C’s new DMA is faster and more powerful than ever. This requires Discovery to leave immediately for the Galactic Barrier beyond which is the ever mysterious 10-C space. Discovery takes on board a number of first contact delegates, including Saru’s maybe girlfriend President T’Rina and Burnham’s best frenemy Federation President Rillak.

Rillak is going along for this mission even though there is a strong likelihood that Discovery may never return. She believes she must go in order to strengthen the odds that first contact will go well.

Meanwhile, Book and Tarka head to the Galactic Barrier, too. First, though, they need programmable anti-matter. Tarka takes Book to the place he knows they can get some: an Orion work camp where he was held prisoner.

These are our two main plots, so let’s break down the major aspects of each. 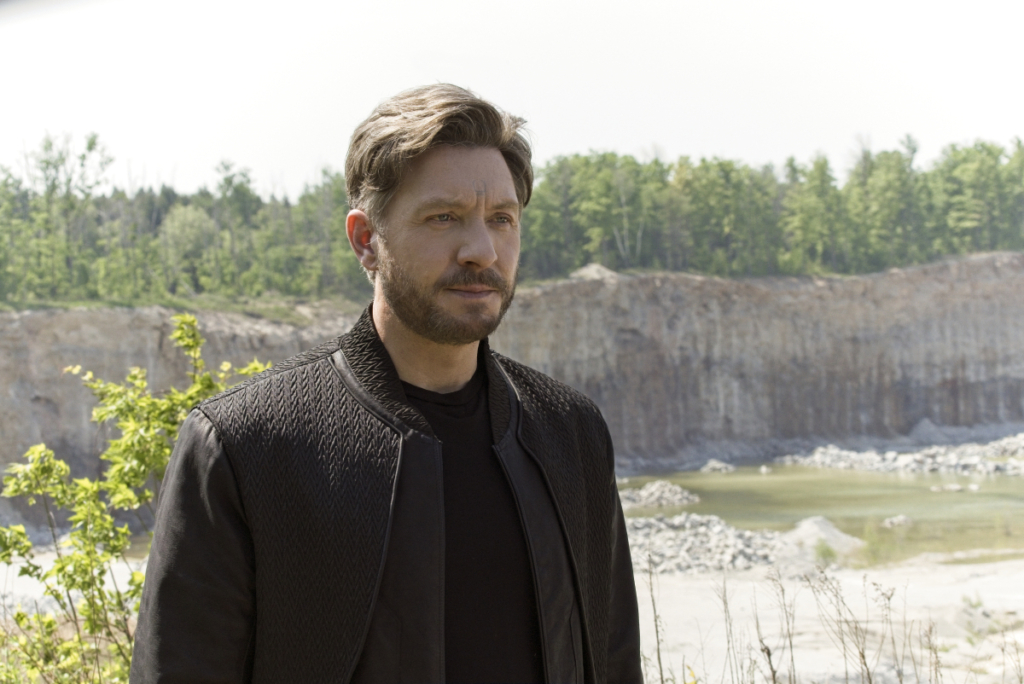 Tarka And The Amazing Technicolor Flashback

Tarka takes Book to the (now abandoned) work camp where he was forced to work. Through a series of flashbacks we find out he was teamed up with another prisoner/scientist named Oros. Rather than doing what the Chain wants them to do, the pair become fast friends and develop a means to escape – specifically to another universe.

Oros is resistant to forming a new bonds. Tarka spent the previous five years in solitary confinement. Despite all that, the pair form a powerful bond over a mutual love of science — and a mutual desire to escape. Oros tells Tarka about an alternate universe paradise his people believe in called Kylees. Tarka is willing to believe in anything as a means of escape, so they set to work building their transporter to alien space heaven.

Unfortunately, Tarka is still Tarka. While the pair slowly figure out how to abscond to Kylees, Tarka hedges his bets by leaking some information to the Chain for his own benefit. That choice backfires and both he and Oros are nearly killed. Oros forgives Tarka, but still expects him to leave the camp on his own. Tarka promises to return, but before he can some kind of massive energy spike explodes at the camp. Afterward the place is abandoned and Oros is gone. Tarka believes his friend found a way to Kylees, but still checks every year to see if there’s any sign of him. His plan now is to steal the DMA power source and use it to travel to Kylees and find Oros. 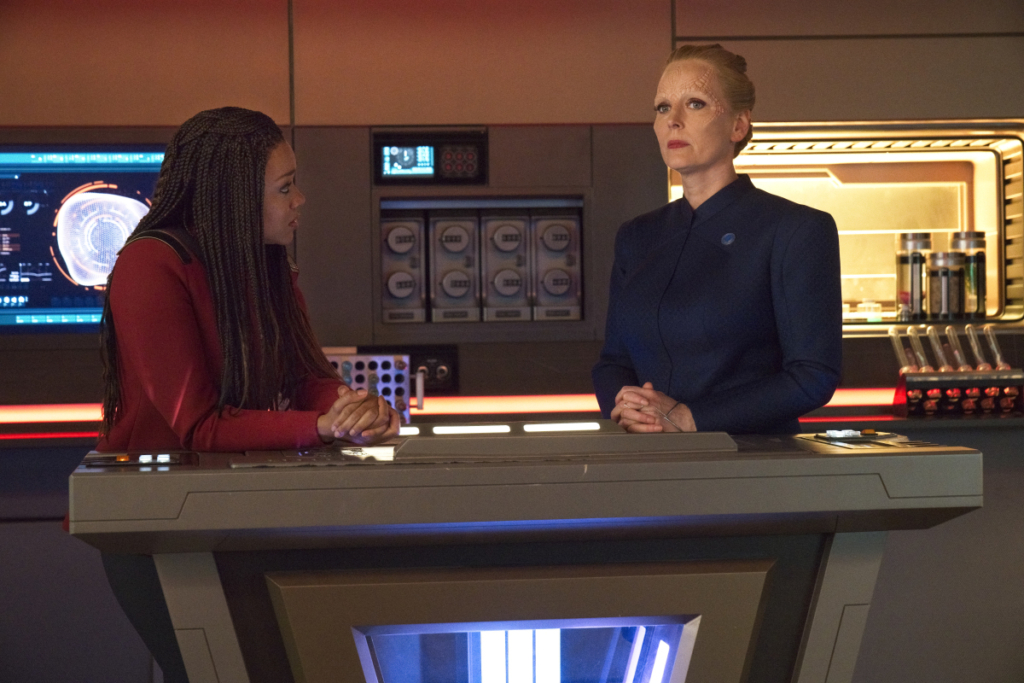 Trust Exercises with Burnham and Rillak

Once aboard Discovery and on their way, Rillak and Burnham have a little tug of war over who is in charge of what during the mission. They agree that the first contact mission is led by Rillak, but matters regarding Discovery and her crew are Burnham’s business.

Unfortunately, early in the mission Admiral Vance sends a priority message to Rillak and Burnham. He reveals that the DMA is traveling to the Alpha Quadrant and will begin damaging (and eventually destroying) Nevar, Earth, and other worlds within a few days time.

Rillak and Burnham debate over whether to inform the crew of this troubling, new information. Burnham admits that she is angry at how little control she has over everything. We find out Rillak’s family is on Earth and her partner is on Earth’s moon. Meanwhile, Discovery gets stuck in the middle of the barrier due to, and this is true, giant, red bubble traffic.

The long and short of it is that Discovery manages to escape the barrier and barely make their way into extra galactic space. As the episode ends, Rillak informs everyone on board that the Alpha Quadrant is in danger. 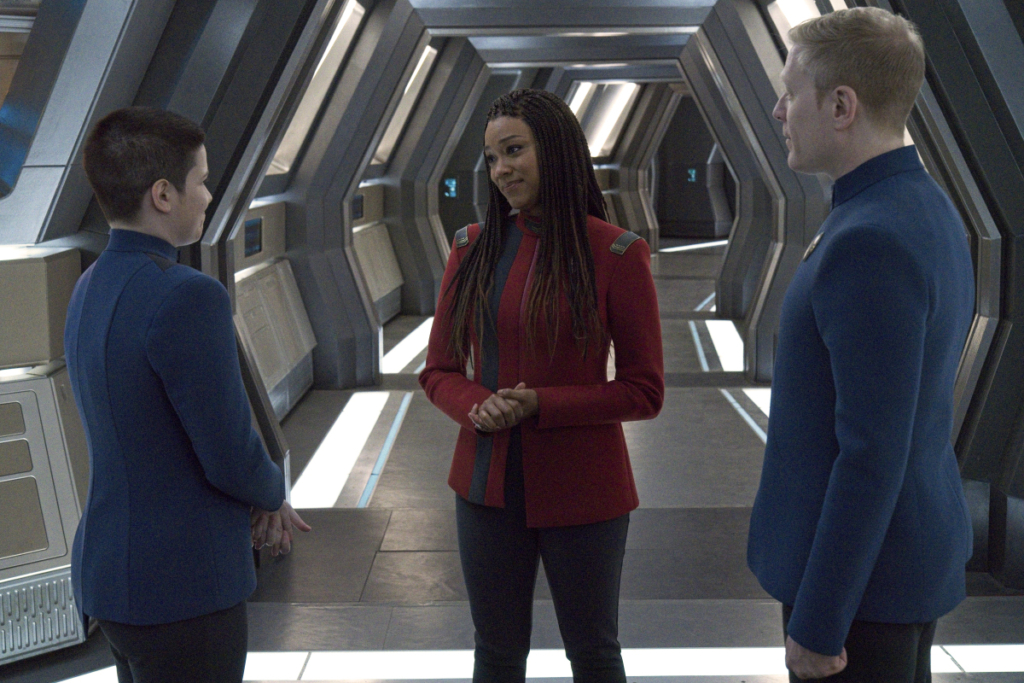 With each passing episodes, the dissonance between what works and what doesn’t on DISCO becomes more and more readily apparent. There are character notes that absolutely sing, but they are marred by the snail’s pace of the Species 10-C storyline.

One of the absolute best parts of this season so far is the conflict between President Rillak and Captain Burnham. Putting Rillak on Discovery for this mission both makes narrative sense and brings this conflict to a head. The scenes where Burnham and Rillak argue their positions are what makes DISCO distinct and great. Both characters make strong points, they are both coming from a place of genuine care, and their conversations yield a satisfying result.

Last week I never would’ve believed that I could like Ruon Tarka, but damned if DISCO didn’t pull it off. The story behind Oro and Tarka is touching, tragic, but still hopeful. And while it may not be obvious, underneath all that alien makeup, Oro is played by Osric Chau who absolutely kills it this episode. I really hope Oro returns by the end of the season. 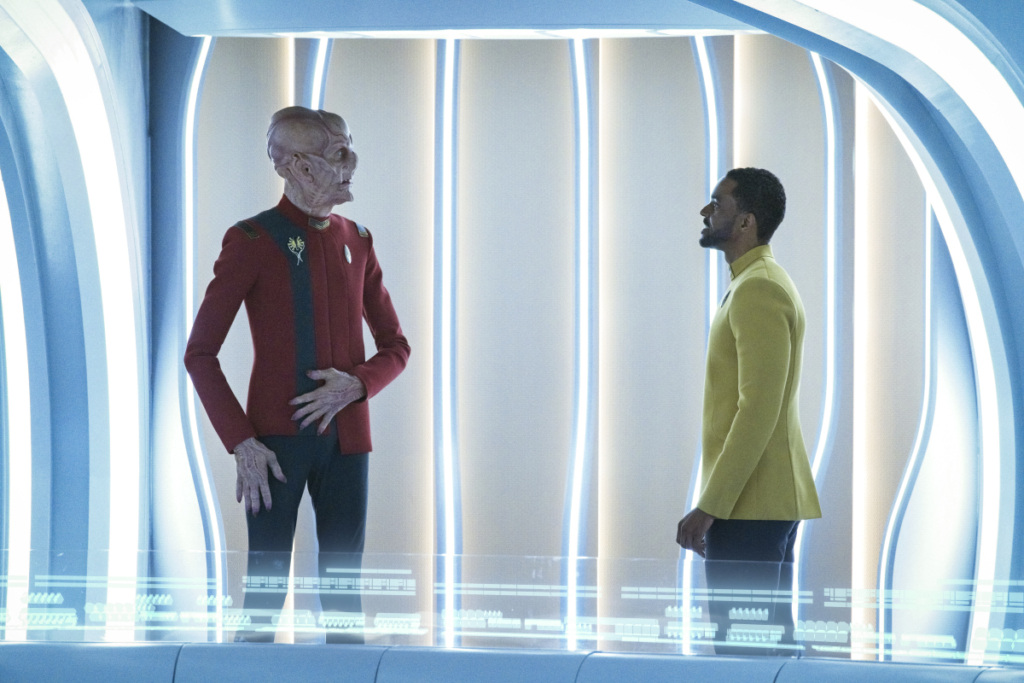 All that good stuff out of the way, the “who are they” question continues this week as DISCO continues to do a lot of tell, don’t show with its bridge crew. As the ship is nearly destroyed by the Galactic Barrier, members of the crew keep it together by saying where each of them will go when the mission is over. Detmer and Owasekun plan for Hawaii. Rhys sets his sights on the Pacific Crest Trail. Nilsson plans for a trip to Astoria.

Over and over again, I ask myself – who are you? Detmer and Owasekun at  least have something going on, but Rhys and Nilsson continue to be utter mysteries Bryce leaves the ship to help Kovich at the beginning of the episode. Who is he? I don’t know. There’s another guy on the bridge who I know even less about than Nilsson. Again, all I know about Nilsson is that she’s blonde and nice.

We’re about to be done with four seasons of Discovery. They sorted Tarka’s character with one b-plot so I know the writers are capable. If the bridge crew is going to be this big, we need more individual episodes dedicated to each of them. 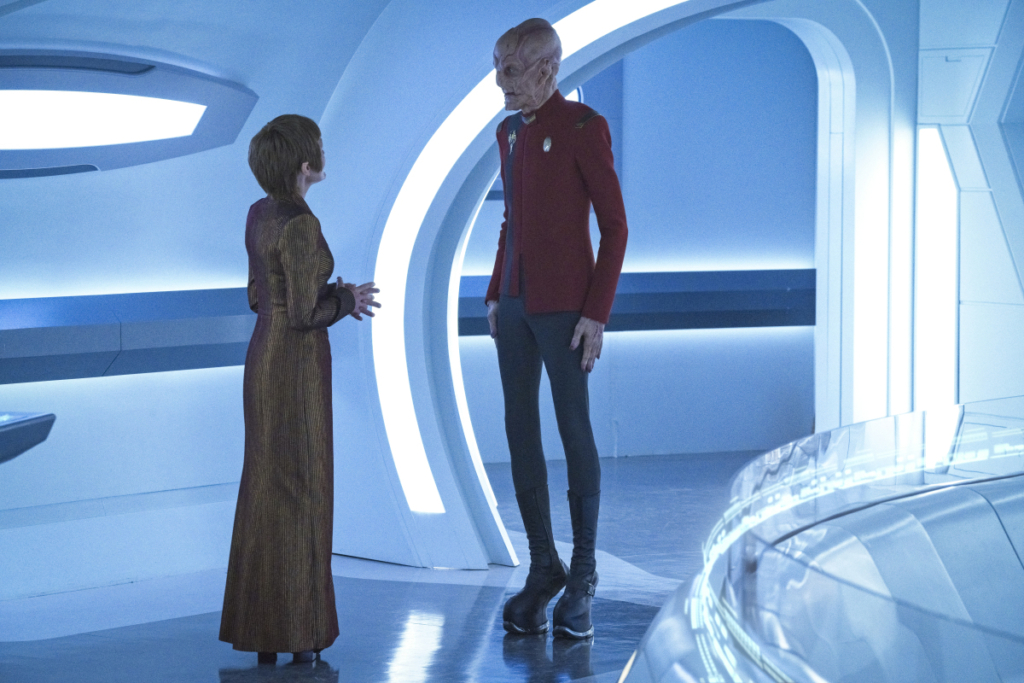 Kovich mentions he’s working on “more pressing matters”. What could be more pressing than the destruction of the Federation? I suspect this is a set-up for season five, but we’ll see.

Adira is back on board and Stamets is back to doting over them like a proud papa. It’s nice seeing Star Trek textually embrace a queer, found family story instead of just heavily implying it.

Speaking of the relationship between Tarka and Oro had a very strong romantic vibe. Here’s hoping something good actually comes of it.

Hooray for T’Rina and Saru slowly but surely building their relationship! It’s telling that there seems to be more people excited for the pair getting together than there are people wondering about Species 10-C.

Fun Trek Fact #1: Kovich compares DISCO‘s trip to the Barrier as a “three hour tour” which is a reference to Gilligan’s Island. Leaving aside the unlikelihood of Kovich seeing a TV show from the 20th century, there is a Trek connection here. Gilligan wears a “Fairy Godfather” costume in a Gilligan’s Island episode titled “Lovey’s Secret Admirer”. The costume is reused for the character Korob in the Star Trek: The Original Series episode “Catspaw”.

Fun Trek Fact #2: Tark and Oro bond over their mutual love of the mathematic concept of the Golden Ratio. The Golden Ratio was utilized when crafting the design for the original Enterprise. 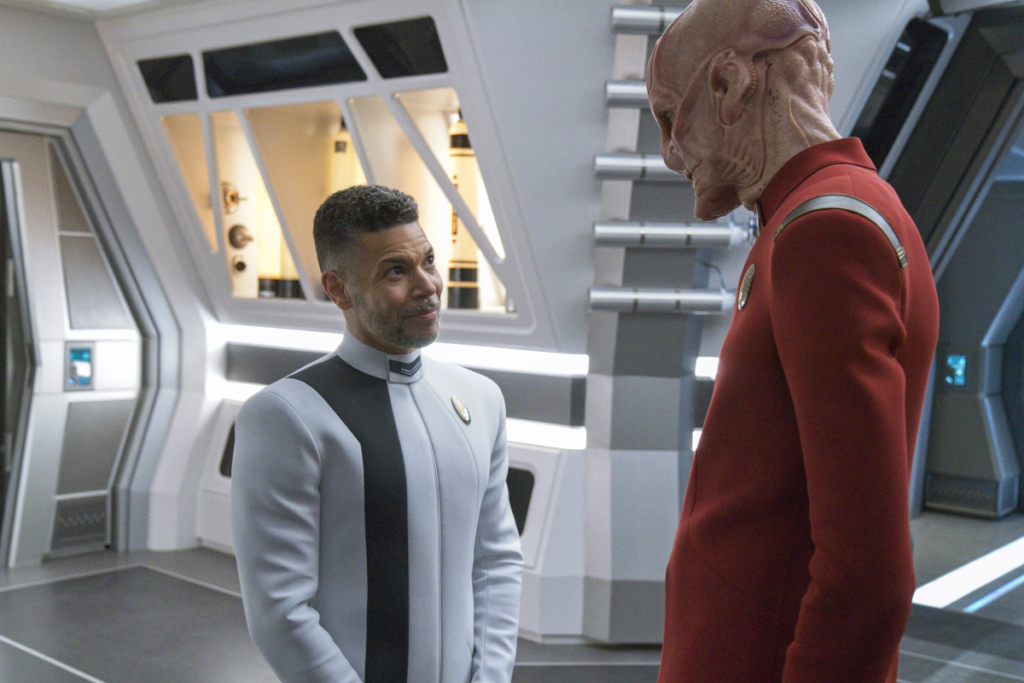 We are in a bit of a lather, rinse repeat situation. We still don’t know who Species 10-C is or what their true motivations are. The biggest, new question is: what’s Kovich up to and will it relate to something this season? T’Rina and Saru still have not kissed, but we’re cautiously optimistic. Although, here’s our big question for you to weigh in on: what would that kiss even look like? We all want that kiss, but do we really want it? Tell us what you thought of this episode and share your theories. We’ll see you next week! 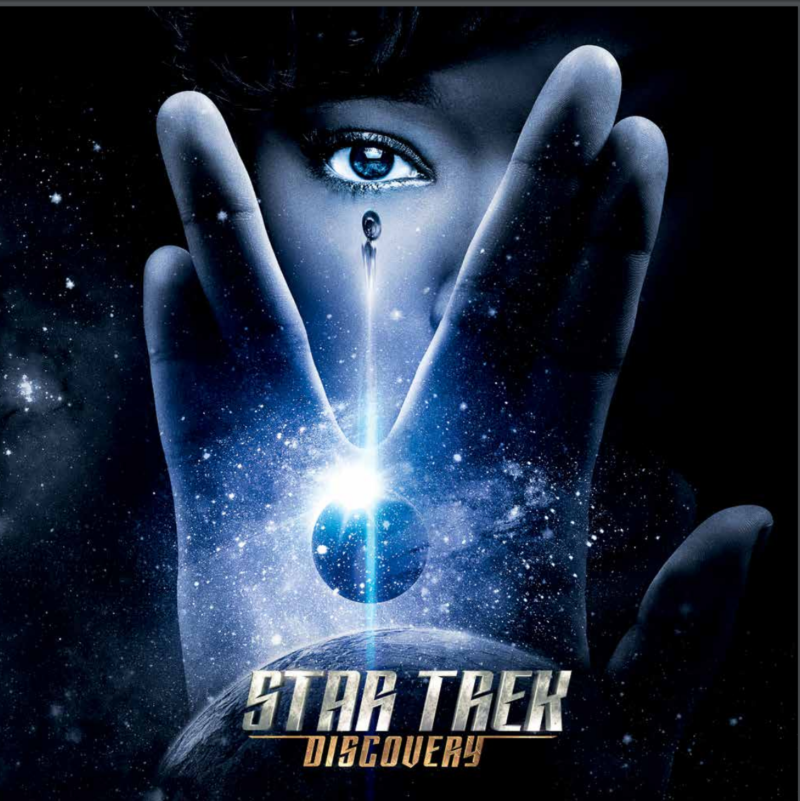 Warhammer 40K: Codex Aeldari Has All The Crusade Rules 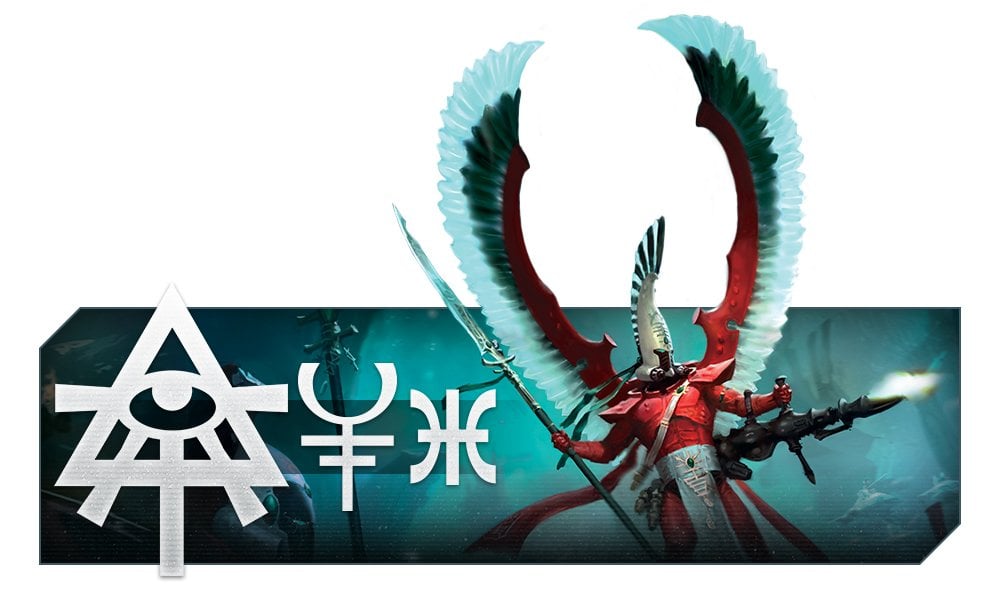