Who Watches the “Watcher” on latest ‘Star Trek: Picard’ 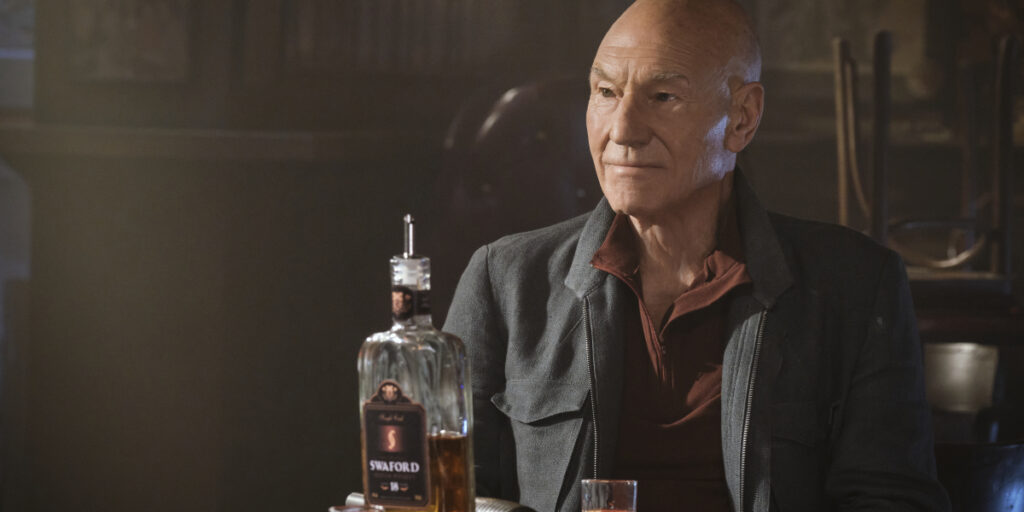 Last week, the crew of Star Trek: Picard leaped into the past to escape and prevent a fascistic future.  This time in “Watcher” we meet faces old, new, and somehow both at the same time.

Previously on Star Trek: Picard, the team is searching for someone called the Watcher but Rios is nabbed by ICE instead. Oh, and Elnor is dead. This week leads us to the Watcher and teaches our heroes about the year 2024 in the process. 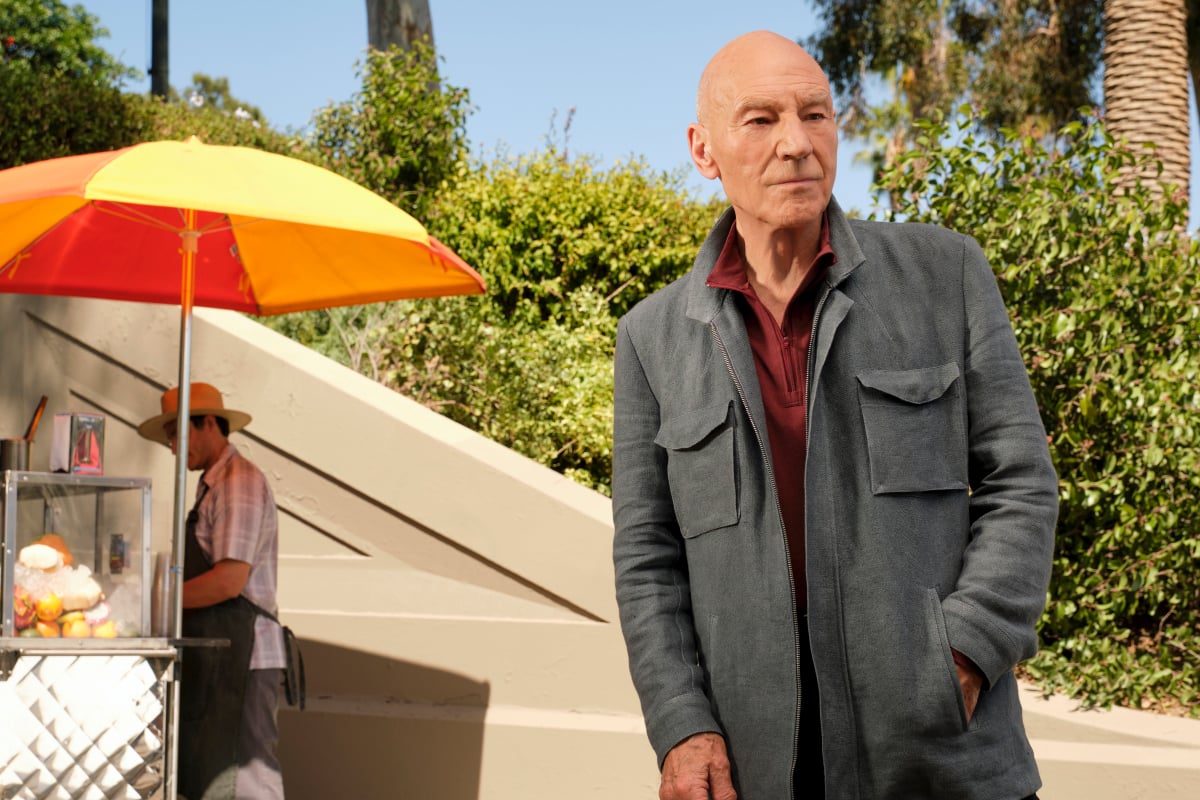 There are three plot threads this episode. There’s Raffi and Seven rescuing Rios, there’s Jurati and the Borg Queen being weirdos together, and there’s Picard hunting down the Watcher. We’ll get the former two out of the way first because the big meat of the story is in the third.

Raffi and Seven turn up to the clinic looking for Rios and find out he’s been taken by ICE. The two pilfer a police squad car and use it to track down where Rios is being held. Rios, meanwhile, tries to protect a fellow detainee only to get tazed for his troubles. He and Dr. Ramirez took for a while about how racist the system is. Which… yeah. No argument here. Ramirez is released but Rios is taken to a bus where he will be disappeared to who knows where possibly forever. 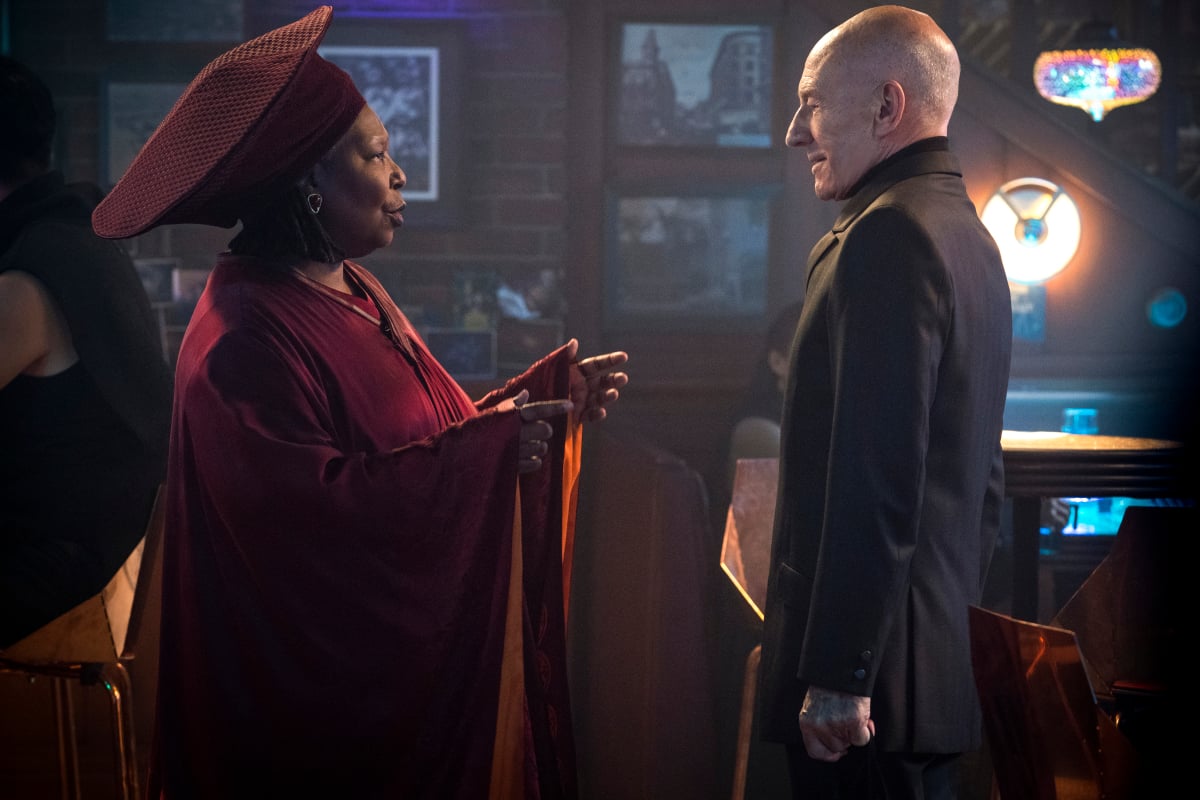 Those Old Yet New Familiar Faces

Picard cares for Jurati at Chateau Picard while she keeps bringing out the number 15 which she pulled from the Borg Queen’s mind. The two realize that 15 corresponds to April 15: the date Q changes the past. Armed with that information, Picard beams to the coordinates Agnes got from the Borg Queen last episode. And where do the coordinates lead Picard? 10 Forward Ave and the home of a much younger Guinan played by Ito Aghayere.

Guinan is in the process of abandoning her bar (and Earth), but Picard spends most of the episode convincing her to stay. The reason Guinan wants off this rock is exactly why a lot of us do. Humanity is bad to the planet, we are bad to each other, and we are especially, oppressively bad to people of color. Picard eventually convinces Guinan to take him to see the Watcher. And it turns out that the Watcher is someone who looks very much like Laris.

“Watcher” ends with Q quietly talking to himself while watching a young woman reading a book. He snaps his fingers, but nothing happens. Roll credits. 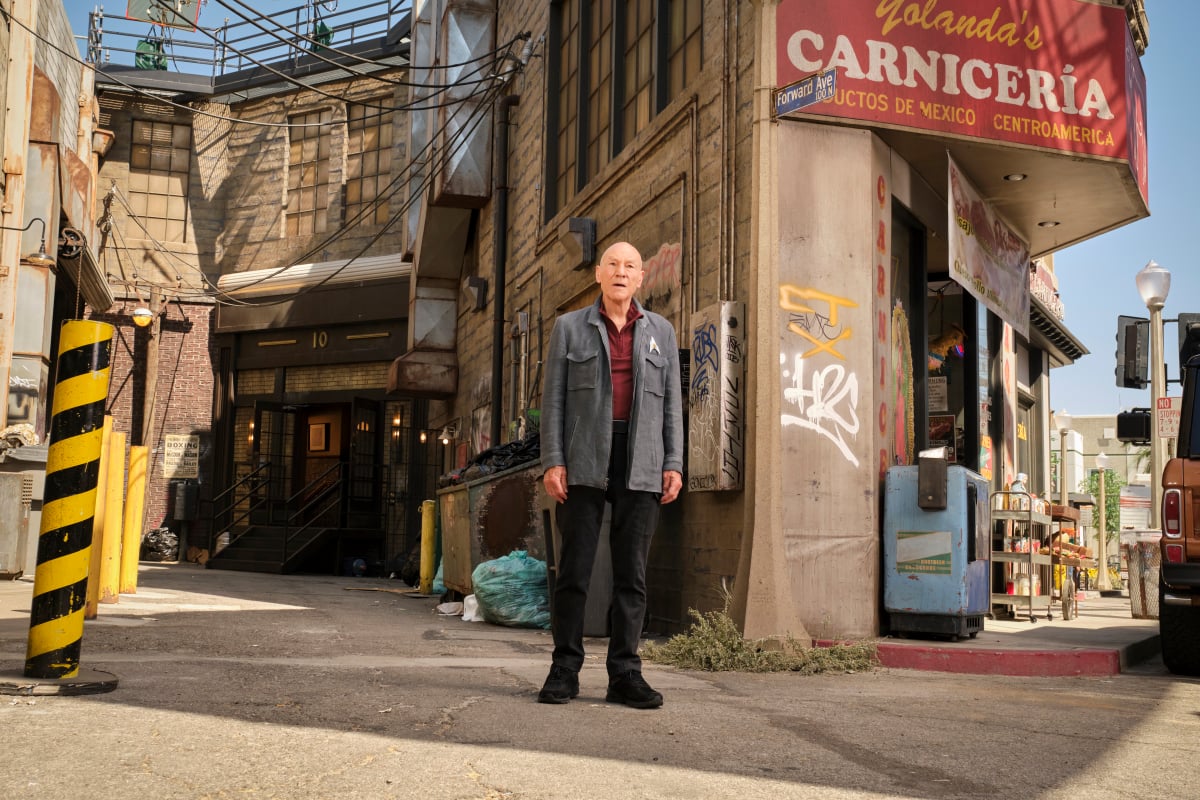 Star Trek: Picard tells one, ongoing story with each episode acting as a chapter in that story. And just like with books, not every chapter needs to be extremely long. “Watcher” has a very specific goal: reconnect part of the team and introduce the audience to said Watcher. Last season, this episode might’ve been nearly an hour long, but the writers seem to have learned to allow episodes to be the length required and no more. So instead of feeling every second of this episode, the forty five minute length glides by. And that’s a good thing.

“Watcher” is what I call a solid 8 out of 10 episode. Pretty much everything is good, but nothing is so great that I’ll be rewatching again and again for years to come. Seven and Raffi conflict over how to deal with Rios’ disappearance and it all makes sense. Raffi acts out of anger and Seven tries to stem the tide of that anger into purpose. And my goodness, whoever is keeping an eye on Seven’s dialogue deserves all the kisses and praise of Trek fans. Seven really sounds like the evolution of her character from Star Trek: Voyager this season and I’m so gratified by that.

Rios calling out how terrible America’s immigration system is comes close to feeling preachy, but never really bothered me. After all, he’s not wrong: expecting people to pledge allegiance under duress only to detain them indefinitely anyway is pretty horrifying! 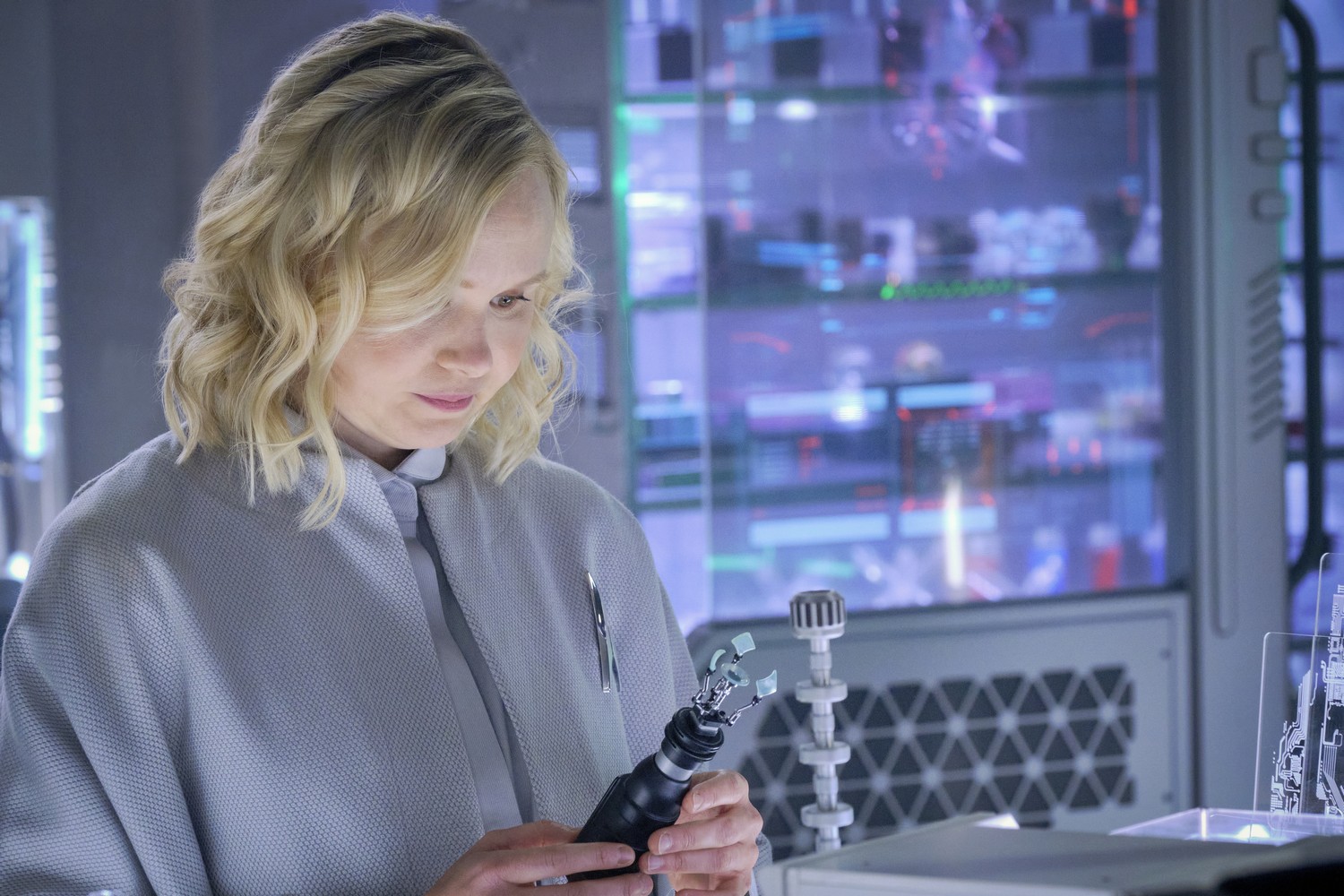 To ‘Ship Or Not To ‘Ship

The only part of “Watcher” that feels a little weak is the plot with Jurati and the Borg Queen. It feels like we’re stuck in a holding pattern while other plot points are resolved. I don’t believe that the Borg Queen would help Agnes because Agnes was willing to talk with her. And while Agnes can be pretty dim for such a smart person, it’s hard to believe she trusts the Borg Queen enough to give her power here the way she does.

That being said, we’re clearly heading for a Jurati/Borg Queen team-up, and there’s a solid chance that might be both fun and exciting. That “you’ve impressed me” comment during “Assimilation” was genuinely chilling. It’s just that nothing from “Watcher” quite lived up to that moment. 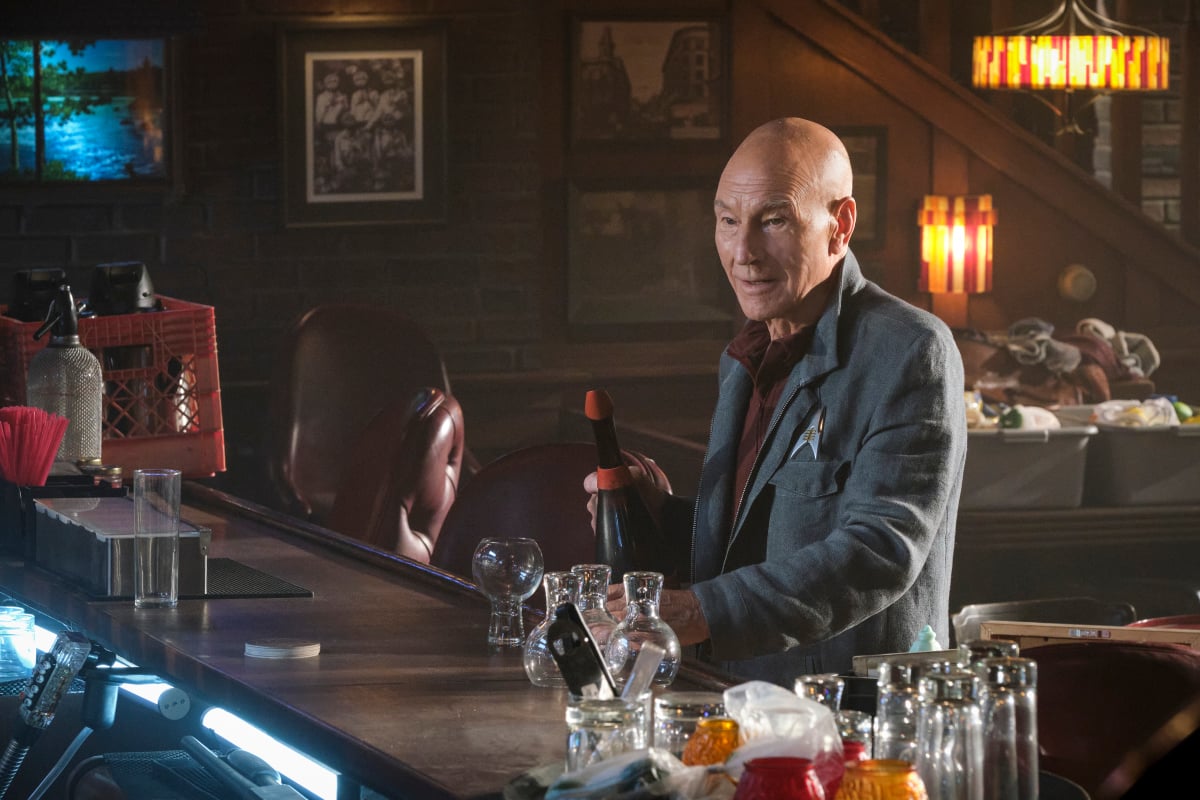 Picard Walks Into A Bar

There’s some great stuff with Patrick Stewart this episode before we even get to Guinan. Primarily, they reveal why Picard sounds British even though he’s from France. It turns out that Chateau Picard was ceased by the Nazis during World War II. The Picard family survives that period in history by escaping to England. That’s depressing as hell, but it’s a new wrinkle to the Picard family past I didn’t even know I wanted.

Recasting Guinan is difficult precisely because Whoopi Goldberg is so good at playing the character. But, Ito Aghayere does an excellent job exploring who Guinan is on 21st century Earth. And, yeah, it’s not hard to believe that she would be pissed off! Exactly like with Rios, a big part of Guinan’s story is about hitting home just how bad things are in 2022… I mean 2024. Yeah, that’s the ticket.

There’s Laris who is not Laris (unless she is). It’s hard to declare if this is interesting or not. Certainly the set to reveal this new (or old) character is enticing, but we’ll hold off on judging whether it or works on not to next week.

Definitely of interest though is the ending note with Q. Who is that blonde woman? is he talking to her or talking to himself? And why can’t Q use his powers anymore? I have a theory, but we’ll save that for the end. 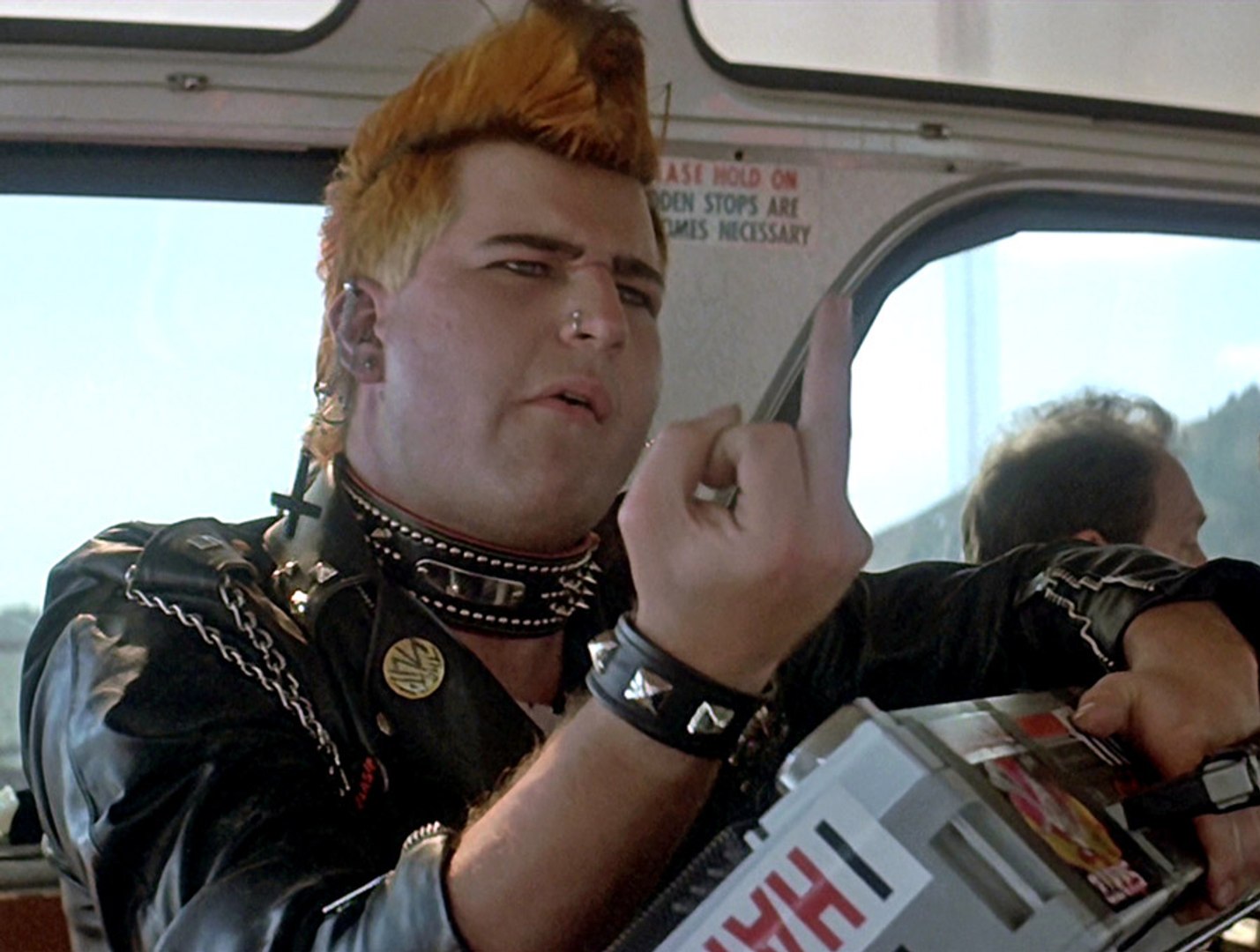 The very second Raffi and Seven got on the bus I hoped for a silly, Star Trek IV: The Voyage Home reference. And we got one. In fact, the punk on the bus is the same one from Voyage Home – it’s even the same actor, Kirk Thatcher. And the fact that he quickly acquiesces to turning off his boom box while nervously touching his neck? Priceless.

Last season the Raffi and Seven romance came out of nowhere. This season it feels earned. Hearing Seven soothe Raffi’s anger and watching them hold hands made me believe them as a couple. And that’s big because, like a lot of people, I was very frustrated by the way the writers threw in that love story at the last second in season one.

Guinan says the Watchers are actually Guardians or Guardian Angels. Guardian is an interesting word. It conjures up the Guardian of Forever and makes me think whoever the Laris-who-is-not-Laris is may travel in time using the Guardian.

As for Q and his powers, this season is beginning to take a somewhat familiar shape. There is a rumored Q episode which was never made which centers on a world turned upside down after Q goes insane. Different timelines bleed together and no one is who they usually are. A friend texted me after watching the start of this season of Picard and declared that the whole thing is a dream. Maybe it is, after a fashion. What if all of this is Q’s subconscious running amuck and destroying the timeline? It’s possible! 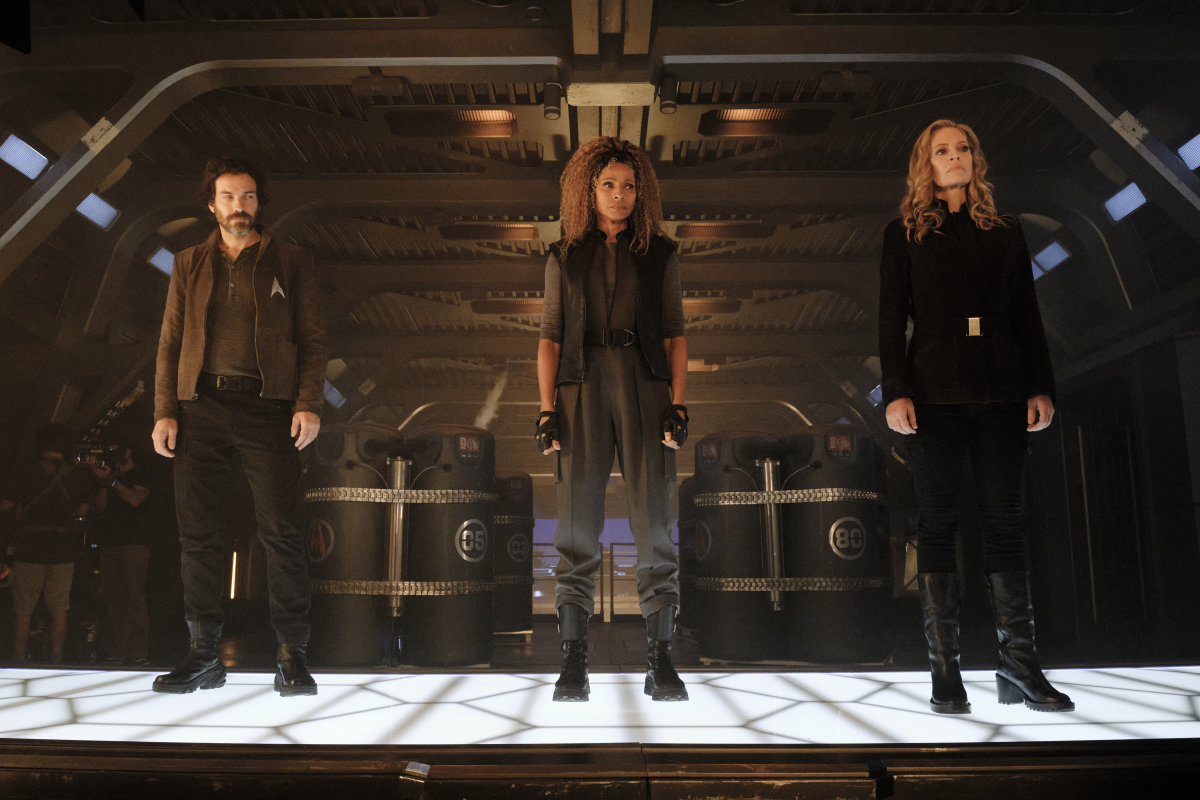 We’re four episodes deep and there’s a lot of ground still to cover. Right now the big question is “Who is the Laris who is not Laris”. All I’ll say is that, much like Avengers: Infinity War, there is a single word uttered somewhere in this episode which might offer a clue. But we still don’t know the identity of the woman Q is creeping on nor what Q’s plan even is. Personally I’m curious as to why Guinan helps Picard only after she hears his name for the first time. Any and all guesses are welcome as to what’s going on. Tell us what you think will happen next! 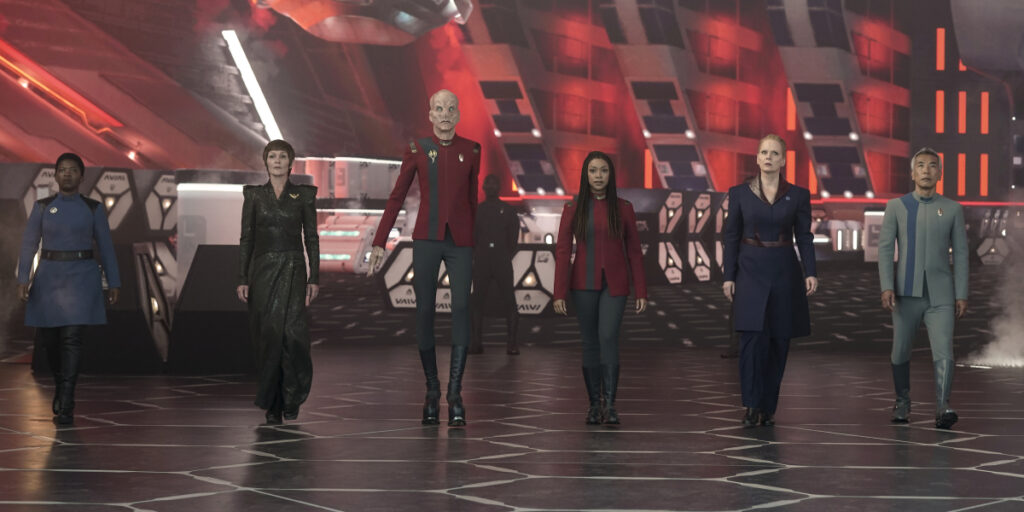