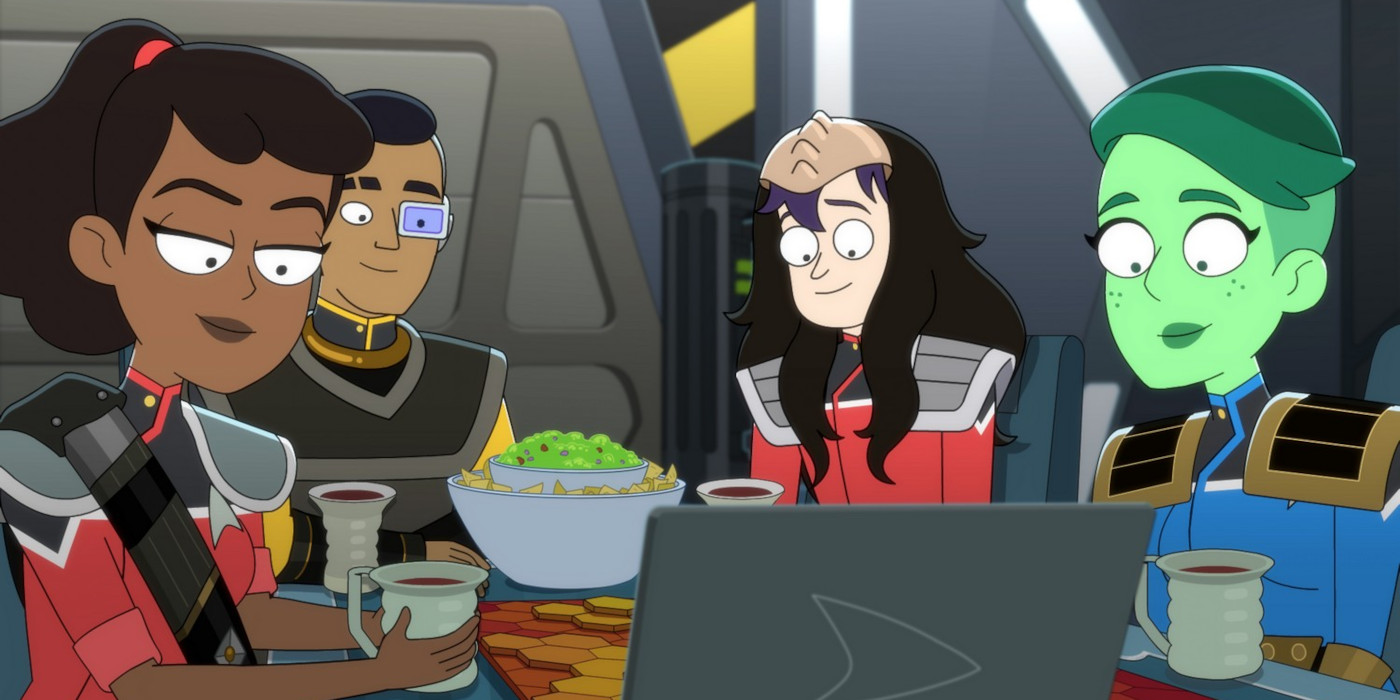 Boimler gets hunted, Mariner gets tested, and we all learn the importance of belly button rituals. Thanks, Star Trek: Lower Decks!

With Captain Freeman back as Cerritos’ captain, it’s business as usual. Or is it? Spoiler alert: it is. Mostly. In “The Least Dangerous Game” Lower Decks explores ways the Lower Deckers relax but also how they thrive at their jobs.

“The Least Dangerous Game” is surprisingly subtle. Yes, it is primarily two goofy plots resolved in the silliest way possible, but it’s also more than that. Does that make it a good episode? Let’s find out. 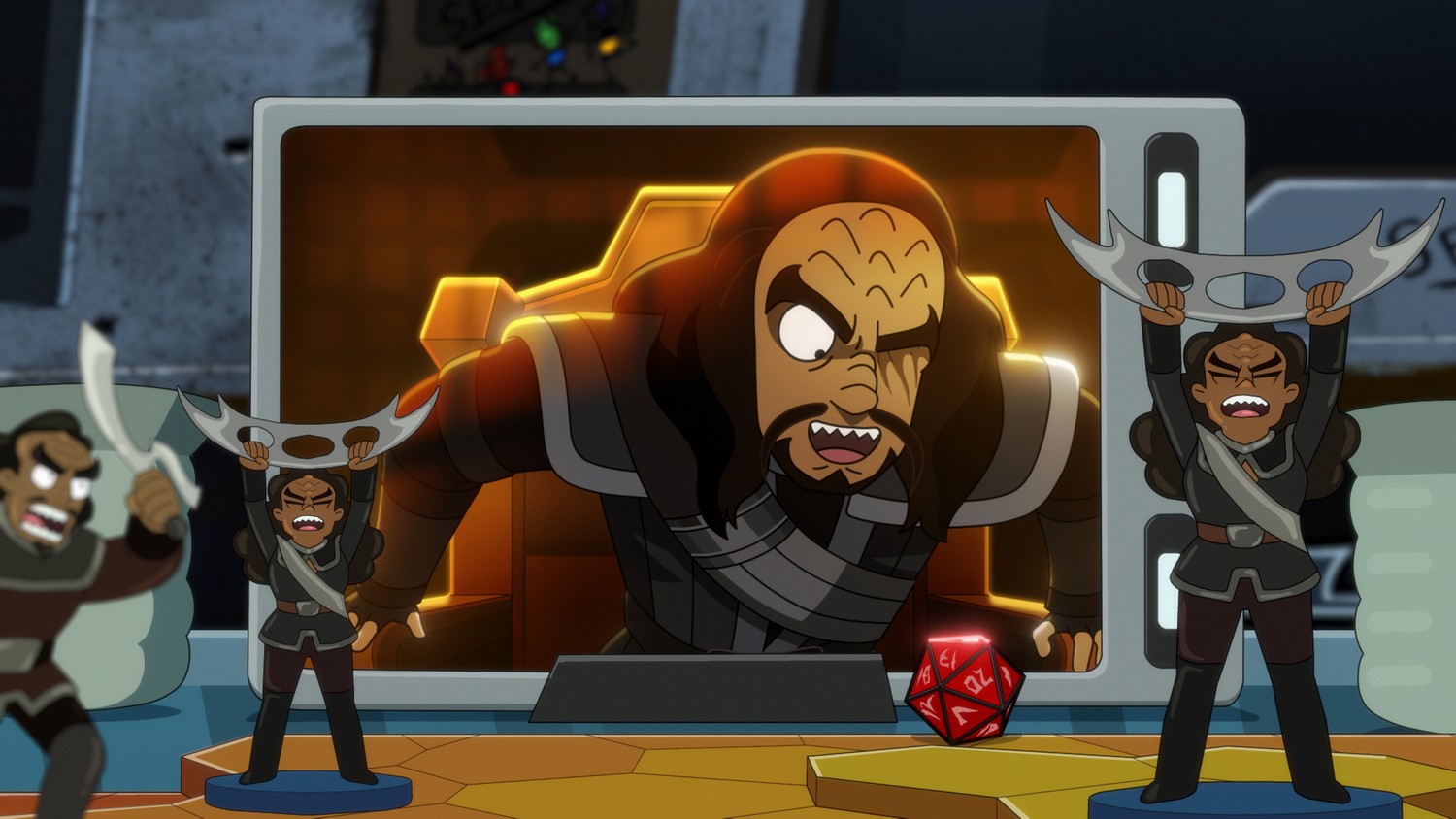 The Lower Deckers should be doing work at the start of “The Least Dangerous Game”. They are, instead, playing BAT’LETHS & BIHNUCHS (the Klingon equivalent of Dungeons & Dragons). Mariner gets word from Commander Ransom that she is needed for a mission.

Tendy and Rutherford talk to Boimler about a former Cerritos crewmate named Vendome. It turns out the Bolian is already a captain, a fact Boimler cannot believe. According to Tendy, Vendome took on every mission he was offered and rose the ranks as a result. This revelation calls Boimler’s careful plans to slowly climb the rungs of promotion into question.

From here “The Least Dangerous Game” splits into two plots. Mariner joins Ransom on a mission to fix a space elevator along with Rutherford and Billups. Meanwhile, Tendy convinces Boimler to say yes to more missions. As a result, Boimler says yes to literally everything – playing spring ball, singing in a  Bajoran Dirge Choir, and even posing nude for a figure drawing class.

But in classic Lower Decks fashion, both stories go off the rails in the quickest and most ridiculous ways possible. 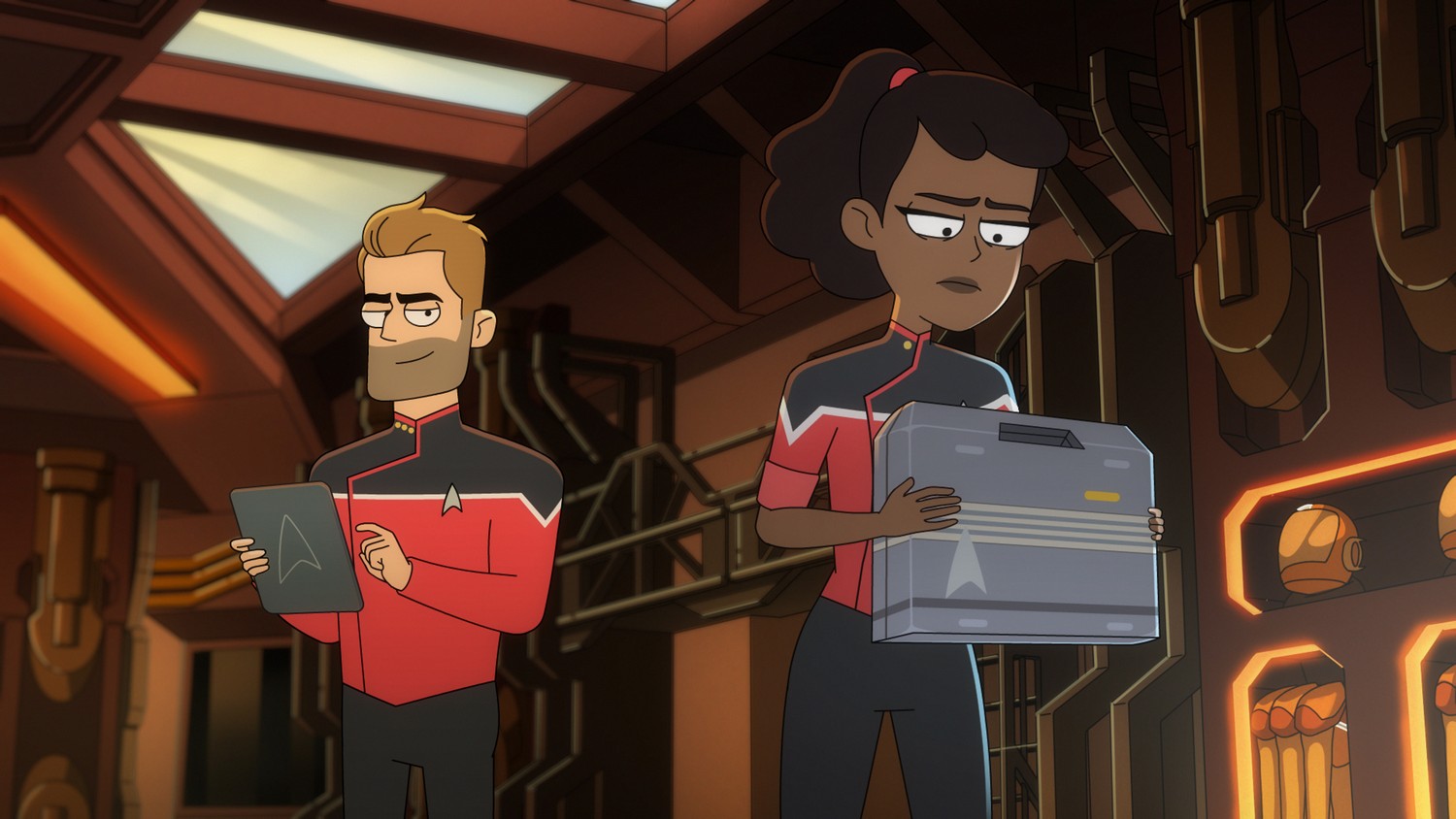 On a Space-Elevator to Hell

An orbital lift is broken above the planet of the Delanians. Many of the planet’s residents are stuck on board the Cerritos while Ransom’s team fixes the broken tech. And breaking with tradition, Ransom decides he and Mariner will fix the elevator while the engineers Rutherford and Billups will head down to the planet to make contact with the Delanians below. What could go right?

Mariner blows off Ransom’s instructions by skydiving to the planet below. She stops halfway down with Ransom contacts her via communicator to apologize. It turns out he is trying to push Mariner to be disrespectful. So in order to cover up the fact that she did disobey orders, Mariner has to run all the way back up the elevator.

Ransom and Mariner then skydive (again) down to the planet where Billups and Rutherford are being fed to a volcano god. Sensing that that Delanians value exercise and wellness, Ransom reveals his muscly body to them, thus brokering peace and preventing Rutherford and Billups from dying to the Delanians baby god Mendrick and his co-leading sentient computer, 355. 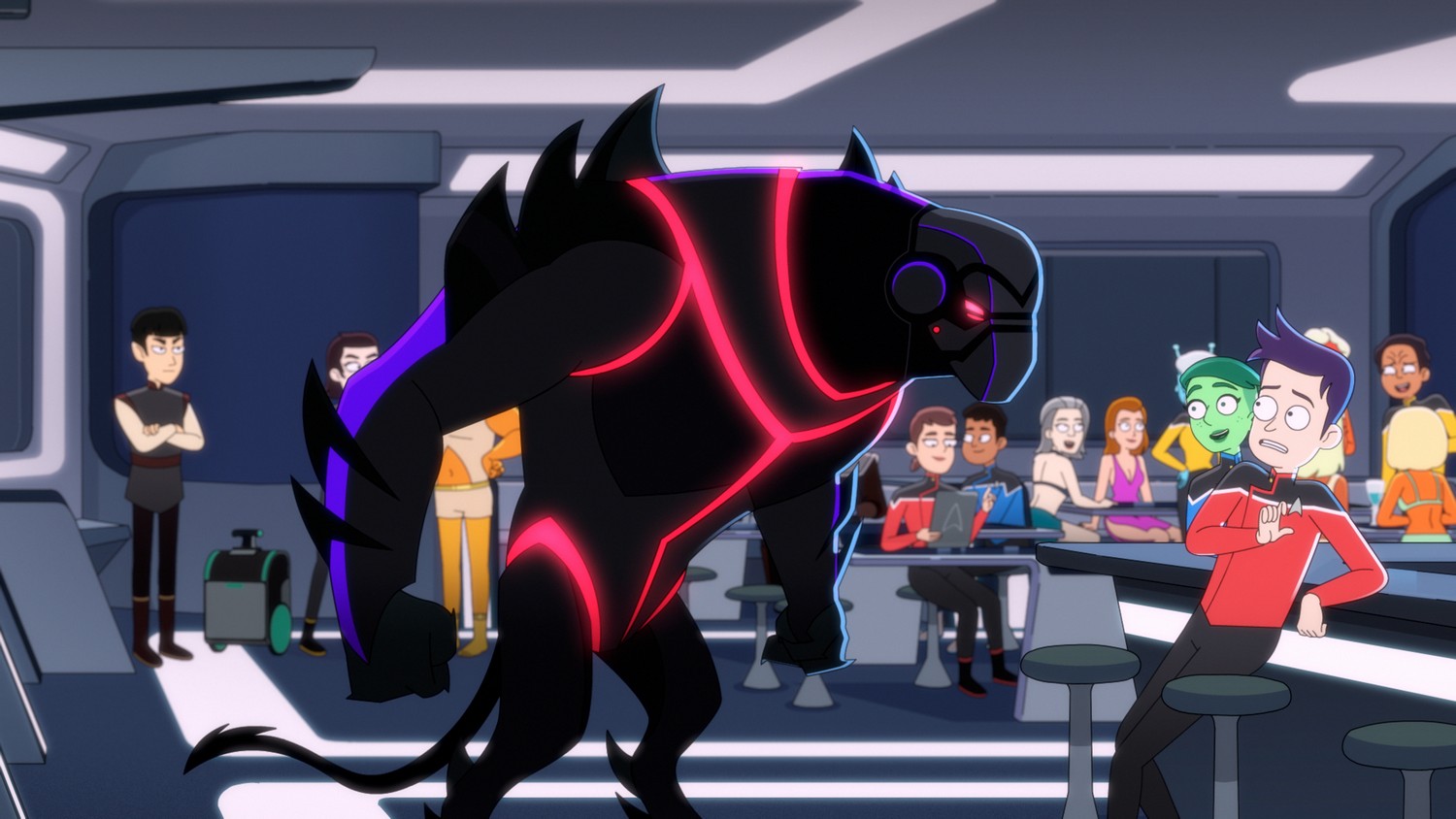 The Hunter Becomes The Hunted (But Not Really)

An alien named K’ranch who needs to hunt to live is stuck on the Cerritos while the space elevator is being fixed. K’ranch needs someone to hunt and Boimler agrees to be hunted. It becomes clear very quickly that K’ranch takes hunting very seriously and Boimler may die. Boimler begs Captain Freeman for help, but she insists that for diplomatic reasons her hands are tied. Boimler agreed to be hunted, so he’s getting hunted.

While hiding, Boimler accidentally activates the Klingon D&D padd. The GM (who just so happens to be Martok) talks about how cowering in fear is never the answer. In true Boimler fashion, Boimler takes this to the most extreme place possible, grabbing a phaser rifle and telling K’ranch that the hunter has now become the hunted.

Naturally, K’ranch throws a spear at Boimler knocking him to the floor. But instead of killer Boimler, K’ranch just takes a selfie. Turns out K’ranch’s people value life above all and are more about catch and release than they are about senseless murder.

In the end, both Mariner and Boimler are lauded for their performances, even though Boimler has permanent nerve damage from being speared in the arm. 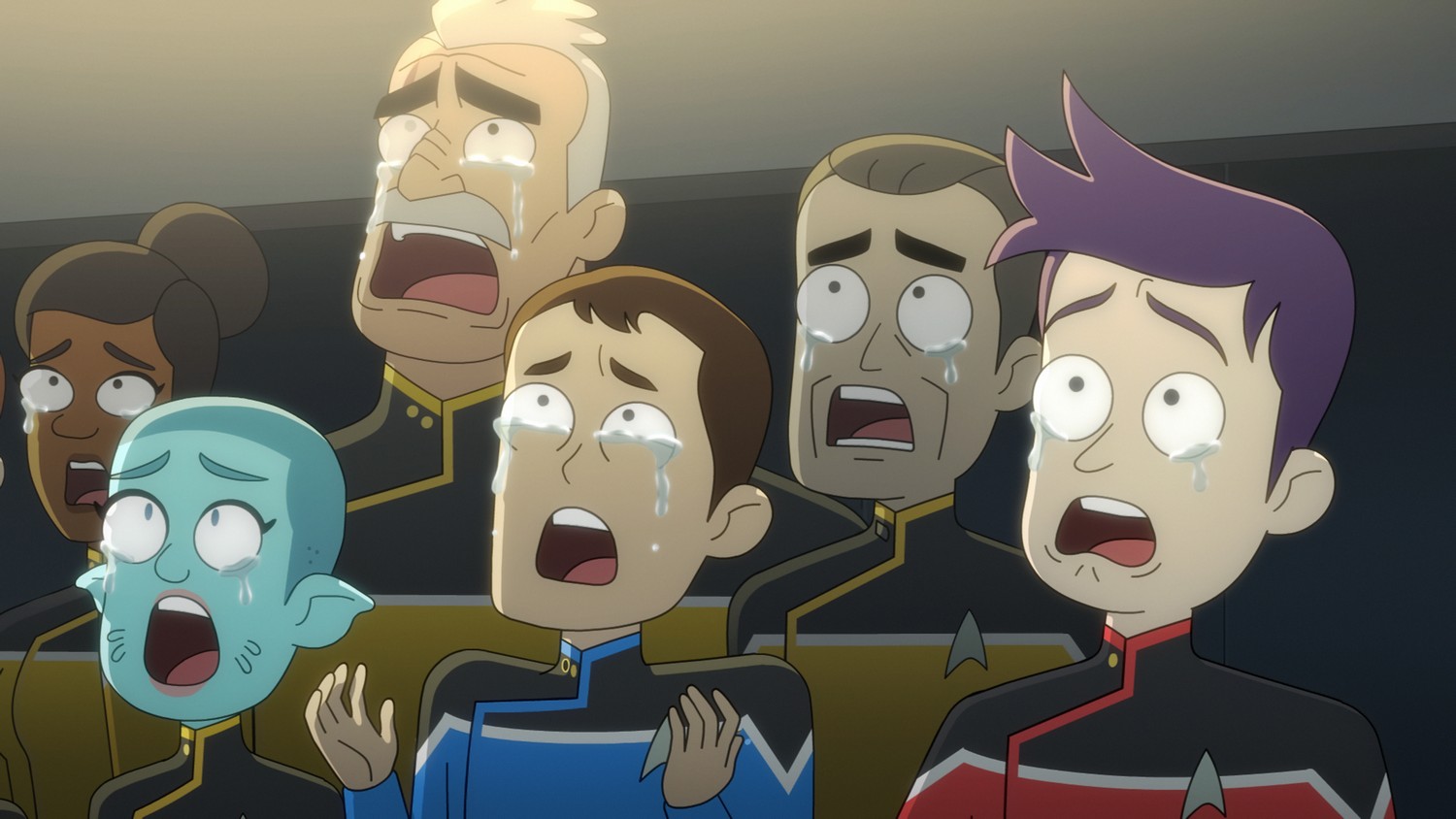 “The Least Dangerous Game” seems like a throwaway episode of Lower Decks. It features characters and races we likely will never meet again, nothing really catastrophic happens, and the jokes are… serviceable. But hiding underneath the basic plots is a fundamental character shift that will likely impact the rest of the season.

On the one hand, we have Mariner who almost follows orders for once! And when Mariner realizes she should have followed orders, she course corrects. And even though Ransom is kind of a jerk about the whole thing, Mariner actually respects him for understanding how to deal with the Delanians diplomatically. We’ve seen Mariner’s love for Starfleet before, but this marks a distinctive move towards her respecting the chain of command.

And on the other hand, we have Boimler who nearly dies during a hunt. Yes, Boimler’s goal is still to climb the ranks, but this new “Bold” Boimler is new. The version of Boimler who screams in terror isn’t quite gone forever, but this newer, bolder version is definitely here to stay. Boimler’s risen the ranks before, it will be interesting to see if this bold approach sees more success — or just gets him killed.

The jokes in this episode of Lower Decks all work, but a lot of them do require you to know a lot of Star Trek lore. Speaking of which… 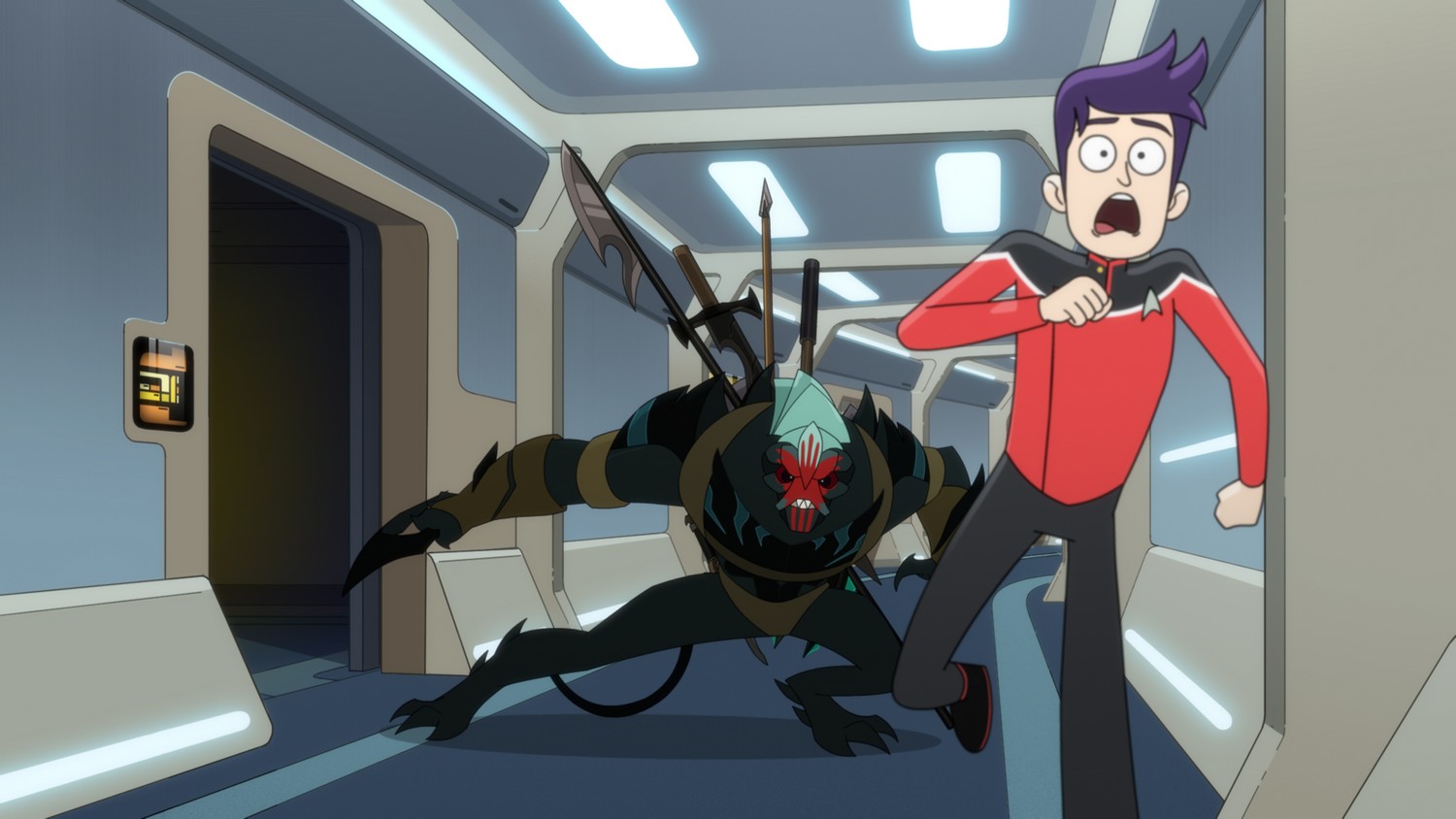 BAT’LETHS & BIHNUCHS is not only a reference to Dungeons & Dragons but also to the Klingon language. Specifically “bIHnuch” is not even a canonical Klingon word, but it does essentially mean “coward”. The word appears in the script for the Star Trek: The Next Generation episode “Sins of the Father”. BAT’LETHS & BIHNUCHS is hosted by a holographic version of Martok, a former Klingon general on Star Trek: Deep Space Nine, now a chancellor.

Mariner’s skydiving is a reference to all the flying through space in the Kelvin Universe Star Trek movies. However, this skydiving stunt bears a specific resemblance to the one which takes place on Vulcan in Star Trek 2009.

K’ranch is a new race of hunter alien. However, his hulky size, face paint, and compulsive need for hunting are reminiscent of an alien race Voyager meets while trapped in the Delta Quadrant called the Hirogen.

Vendome is an actual Lower Decks character. He does in fact bumble in all scenes we see him in which makes his rise to captain all the more hilarious. 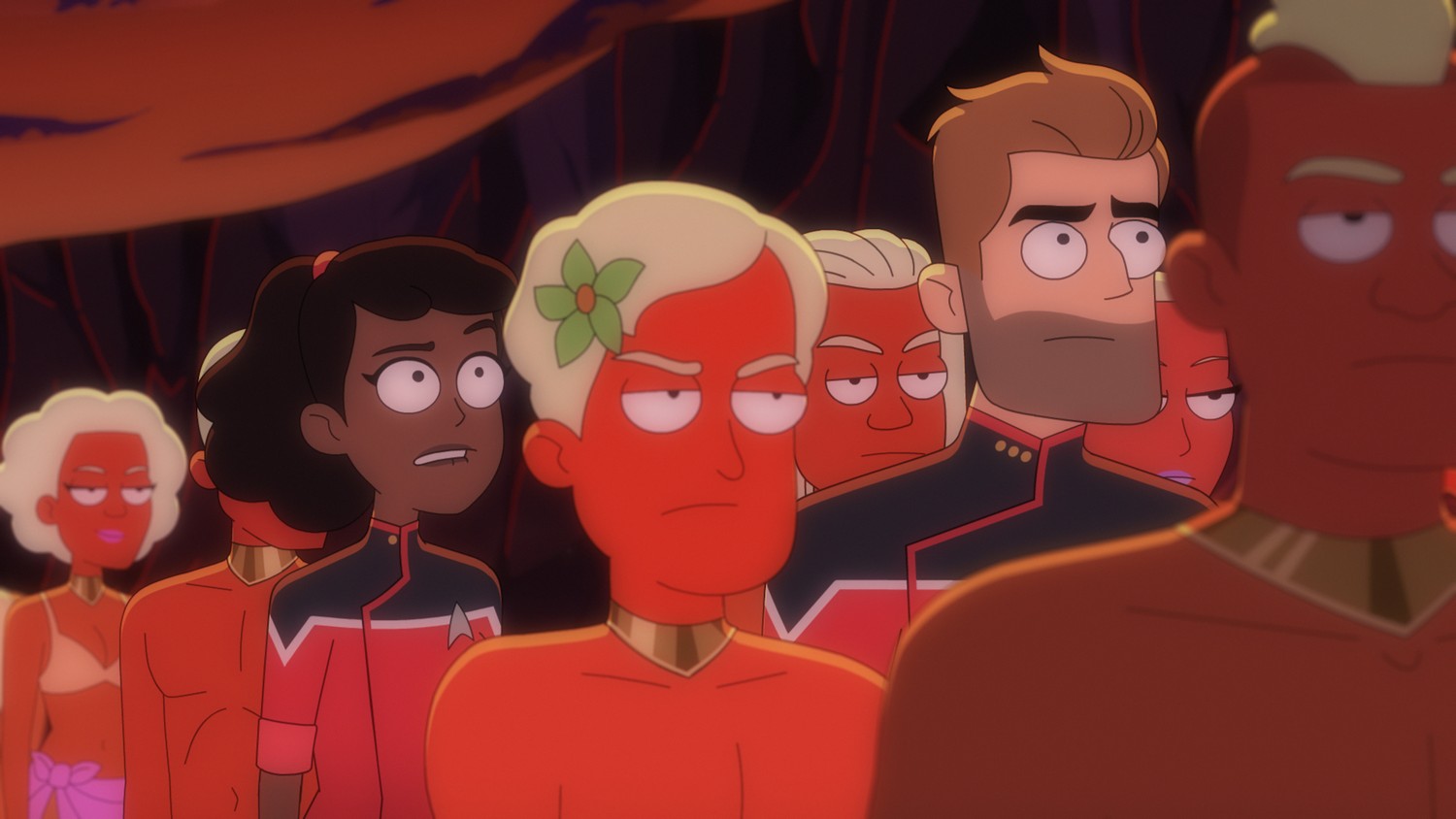 The aliens Billups and Rutherford fail to make diplomatic relations with are a mixture of a lot of past Trek species. Even their name is a funny reference. The Delaney sisters are twin officers on Voyager. Throughout the show’s seven seasons, Harry Kim and Tom Paris refer to the sisters as women they want to date. It doesn’t go well!

Visually, the Delanians look almost identical to the Children of Vaal from the Star Trek episode “The Apple“. In that episode, the Vaalians, like the Delanians, have orange skin, wear flowers in their white hair, and worship a computer god. The Delanians also worship a volcano which is similar to The Nibirans from the beginning of Star Trek Into Darkness.

As for their love of exercise, wellness, ridiculous amounts of sex, and bursts of unnecessary violence the Delanians are remarkably similar to the Edo from the Star Trek: The Next Generation episode “Justice”. In that episode, the Edo attempt to put Wesley Crusher, a child, to death for accidentally breaking a minor law.

All in all, “The Least Dangerous Game” is a good episode of Lower Decks, if a little light. But it does signify important growth for both Mariner and Boimler. Three out of five stars.

Author: Lina Morgan
Lina is a 10+ year entertainment journalist veteran whose bylines include SYFY Wire, Looper, and Screen Fanatic. She has written comic scripts for IDW Comics and Zenescope Enetertainment and has written Doctor Who shorts for BBC Worldwide. She is a long-time podcast host and producer who has worked on Who Won the Week, SYFY's Every Day series, and the Amazon podcast Untold Story. She currently co-hosts the New York Times recommended podcast Song vs Song.
Advertisement
Animation Movies and TV Pop Culture Sci-fi Star Trek
Advertisement 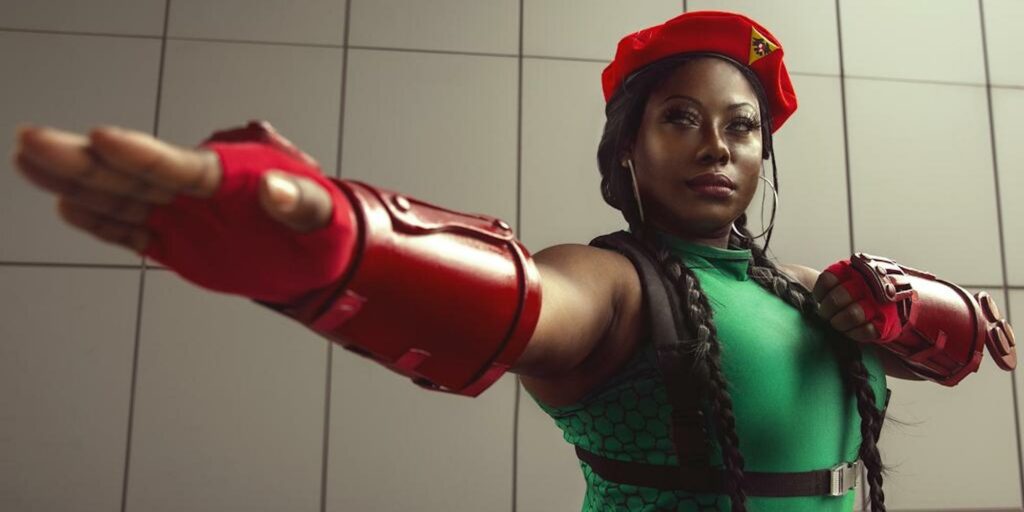