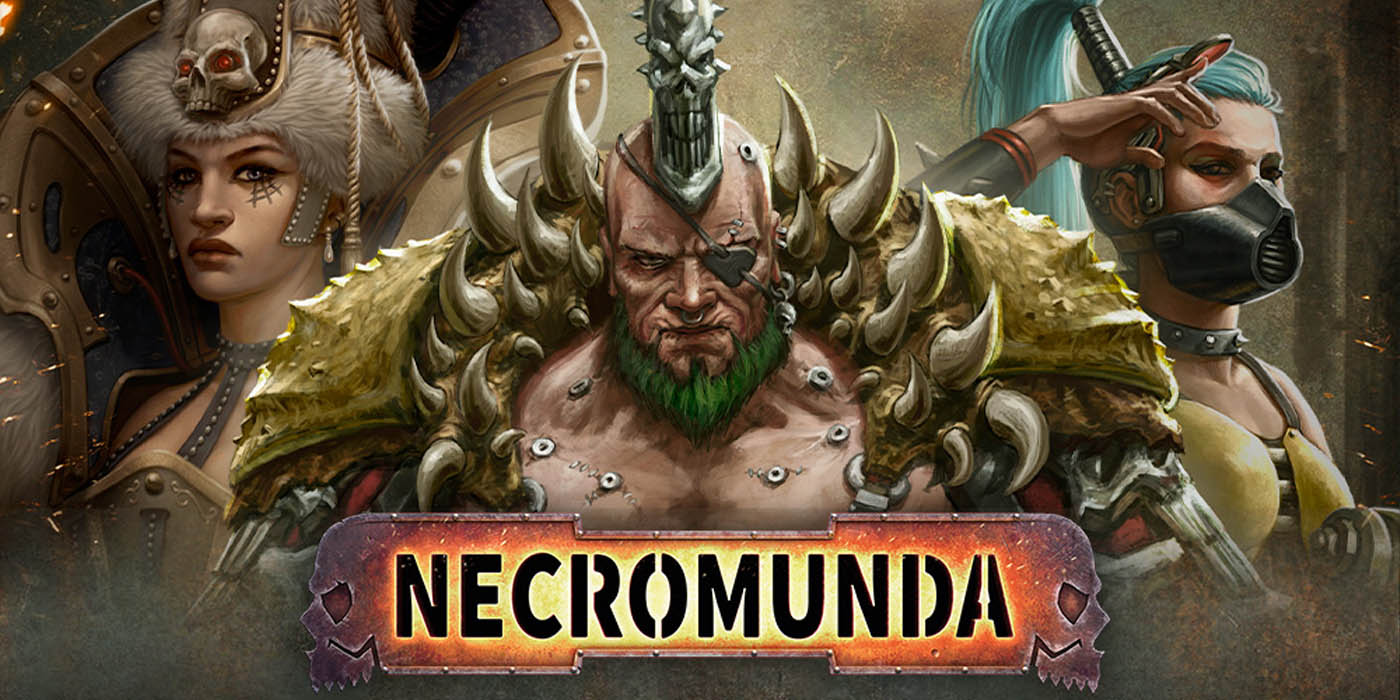 Ciderak Burning has some planet altering events happening on Necromunda the most notorious Forge World in the Imperium.

As a setting, Necromunda has pretty much been the same for almost 30 years. You’ve got Necromunda which is a Forge World in the Imperium. It’s a hive world — meaning the population lives in massive sprawling hives while the surface has essentially been stripped of all materials. Outside the hives is an Ash Waste. Only recently did Games Workshop start to explore what life was truly like outside the hives with their various “Book of…” series. And then the launch of Necromunda: Ash Wastes. But all those things didn’t really move the story of Necromunda forward. These were more of a “history” of Necromunda. 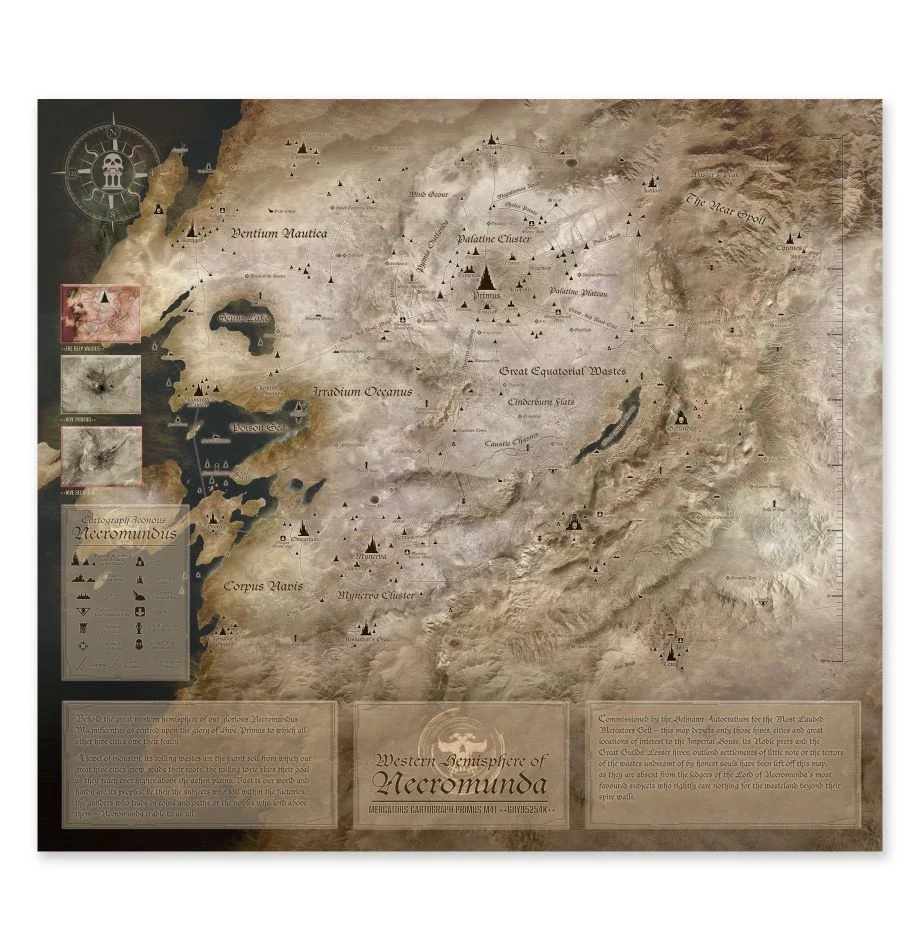 But times are changing. The Grimdark is moving forward in time and events are happening. Games Workshop teased that Necromunda wouldn’t be the same after the events in Necromunda: The Aranthain Succession – Ciderak Burning. And they weren’t kidding. We got our hands on a copy of the book and have read all the lore. Here’s just a few of the big planet-changing events happening — this storyline just got a lot more interesting.

The Great Blackout And Ensuing Storm

The planet of Necromunda has been essentially terraformed by the great factories and the toxic clouds that pour from them. But what happens when the factories go dark? That’s exactly what happens on Necromunda after the Great Rift tears into reality. The psychic backlash echoes throughout the galaxy and the planet Necromunda is caught in its wake. The power goes out across the planet and these great factories shut down. The hives across the surface go dark and the core of the planet cools. The light of their sun is also dimmed briefly as well…

At first, there’s a lot of shock and confusion. Most of the planet’s populous has never experienced this level of “quiet” before, much less the temperature getting colder. Naturally, there’s the initial panic. But that even broken by people who start to take advantage of this new state of affairs. Old grudges get settled. Skirmishes break out. Looting happens. The class divide between the commoners and the nobles is also very stark as many of the nobles retreat to the “Secure” areas and leave the smaller houses and gangs to fend for themselves. And they do. 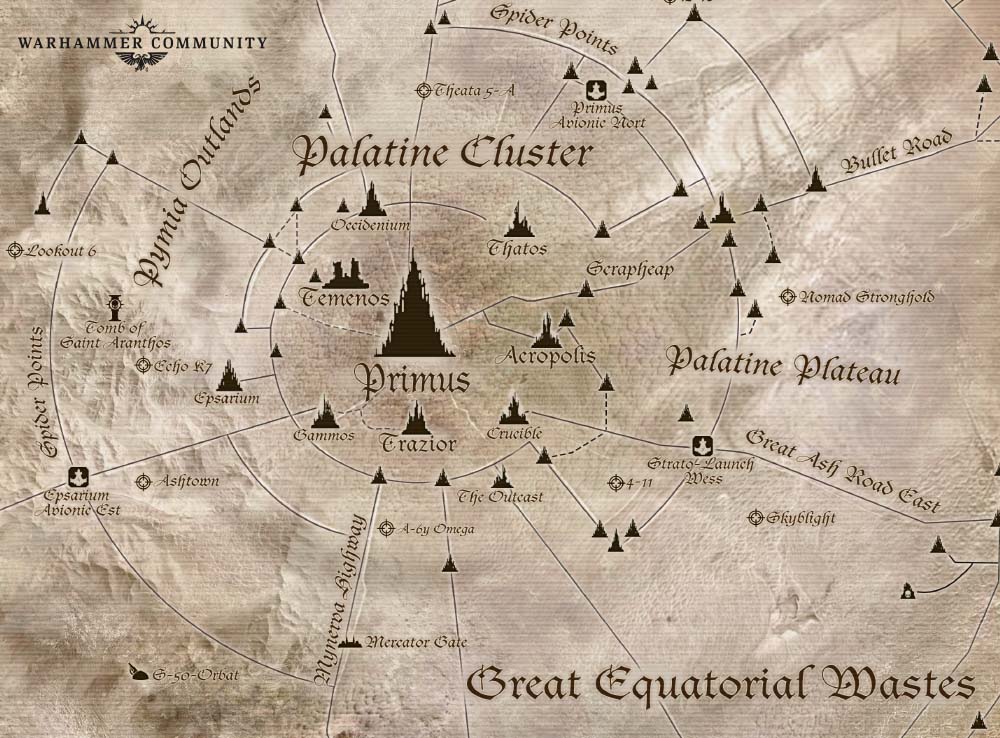 Outside the walls things got even weirder. Because the planet’s temperature started to drop, those toxic fumes started to condense. And those condensing vapors made clouds. Those clouds of toxic gasses made for toxic rains…and it wasn’t pretty. There was a planet-wide toxic storm and the great Poison Sea started to raise it’s “water” level. Many settlements were drowned in the toxic waters as they rose up and overtook them. There was basically a mass exodus to higher ground and the folks that didn’t make it…well, you can imagine what happened to them. 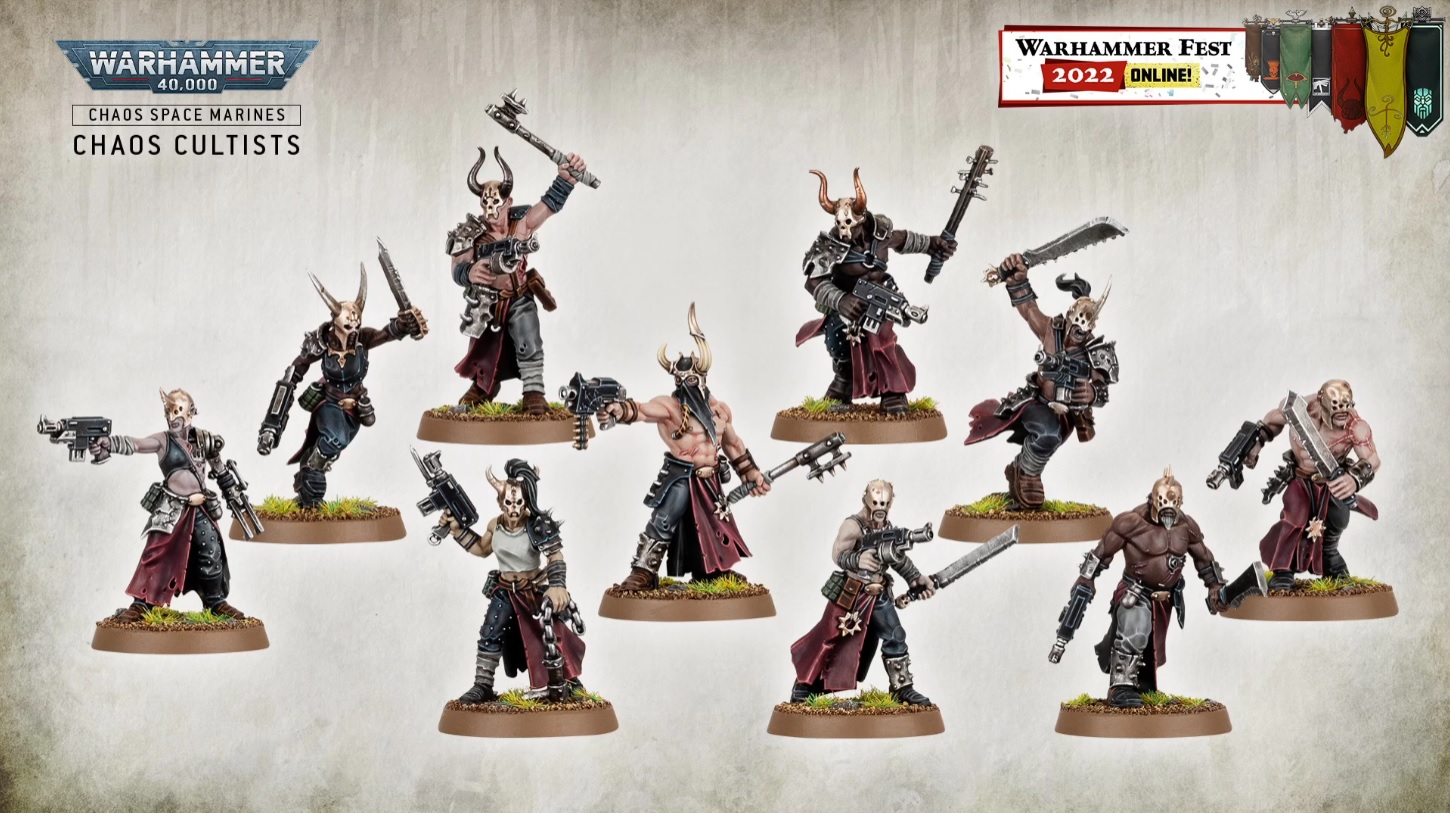 Almost as if it was planned hundreds of Chaos Cults and mutants rise up from below and attack during all the …chaos. These hordes being to overwhelm settlements and start to slaughter anyone caught in their way. But you don’t take over a gang’s turf without a fight and the gangs fought back hard. Many of these street level crews set aside their differences and band together to fight back against these Chaos Cults and mutants. They put up a stiff defense and repel quite a few of them — however, not everyone makes it out unscathed. Many settlements are lost to the slaughter.

An Assassination Attempt And Power Vacuum 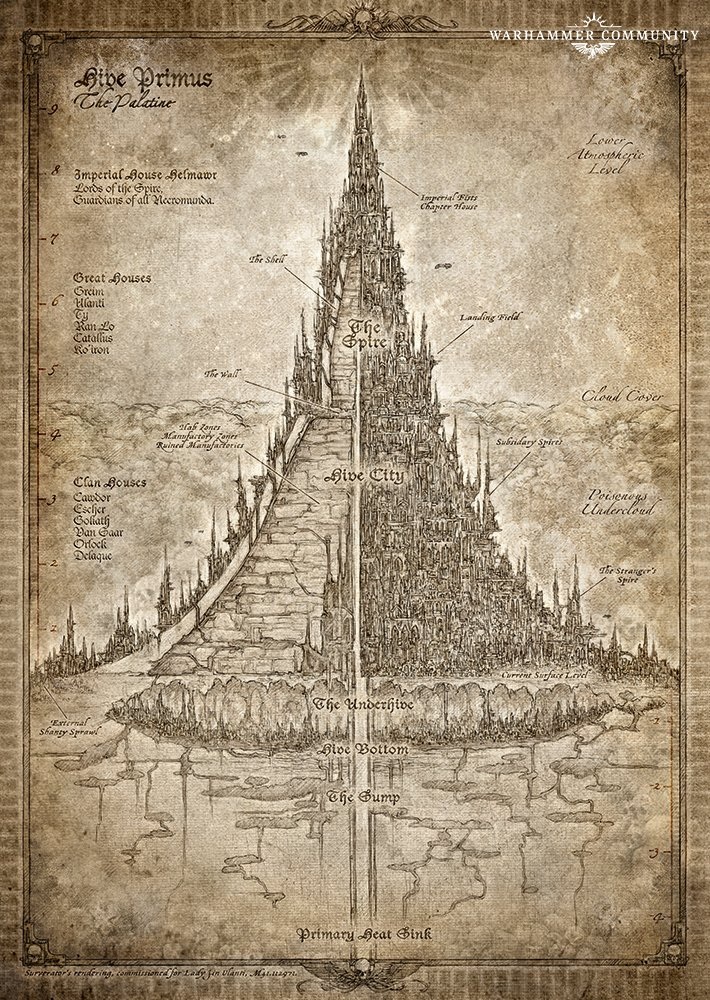 This one was already spoiled by the Warhammer Community but it’s still a big deal. Lord Helmawr, leader of the Imperial House on Necromunda, is almost killed. His assassin is knocked through a window and falls to her death but the damage is done. Stabbed by a poison blade the toxins are coursing through this system. His only chance is stasis and his enforces barely get him there in time. Naturally, now that the “ruler” is out of the picture there’s a massive power vacuum.

The plotline here is pretty nuts. Without getting into ALL the details, let’s just say it gets very Game of Thrones in the Underhive…only without all the incest (thankfully). Noble houses start to plot and plan to take over with the support of the various other gang-houses. Goliath gets recruited by one faction while Escher gets recruited by another. The stage is set of a big brawl — but more challengers enter the field. 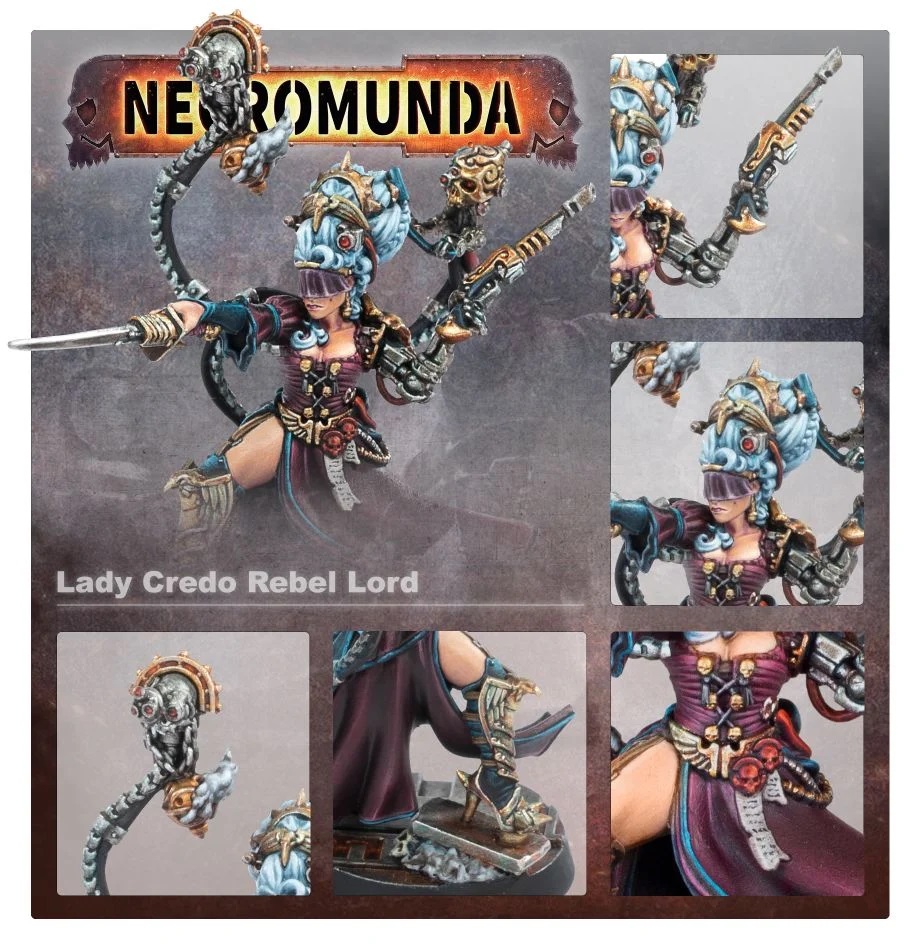 The leadership of House Goliath is rocked when one of the heirs of Lord Helmawr is killed and so is the current Over-Tyrant Varran Gor by the former Over-Tyrant of House Goliath Djangar ‘Gunfists’ who’s back. On the Escher-side, they had an alliance with one noble house, but swapped allegiance to Lady Credo, the Rebel Lord, after a plot a few millennia in the making comes to fruition. Oh, and there’s also an internal fight within House Escher with some chem-wyches… 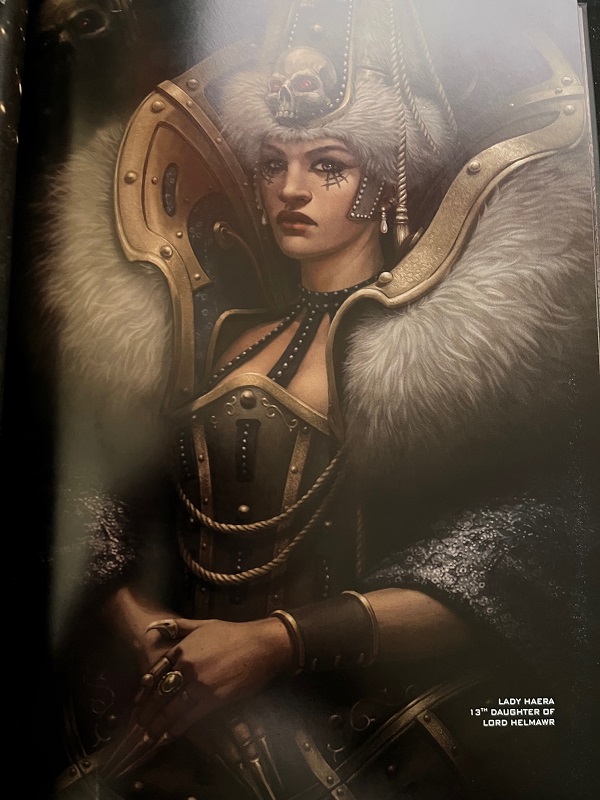 Confused yet? Like I said, ” very Game of Thrones in the Underhive…only without all the incest” and I’m glossing over most of the good stuff. At the end of the day we end up with Lady Credo and her Escher allies vs Helmawr’s heir and house Goliath. Only it turns out that Gunfists killed him and basically just wants a make a play for some power/turf. But he’s actually not the other challenger. That ends up being Lady Haera, the 13th Daughter of Lord Helmawr. She kills a bunch of her siblings and other nobles and basically makes a move so bold (and scary) no one else from the nobility is crazy enough to stop her. That sets the stage for Lady Credo vs Lady Haera as the two main “factions” forming on Necromunda.

Again, I’m glossing over A TON of material and skipping around timeline wise. There’s just too much to cover. Go read the book. 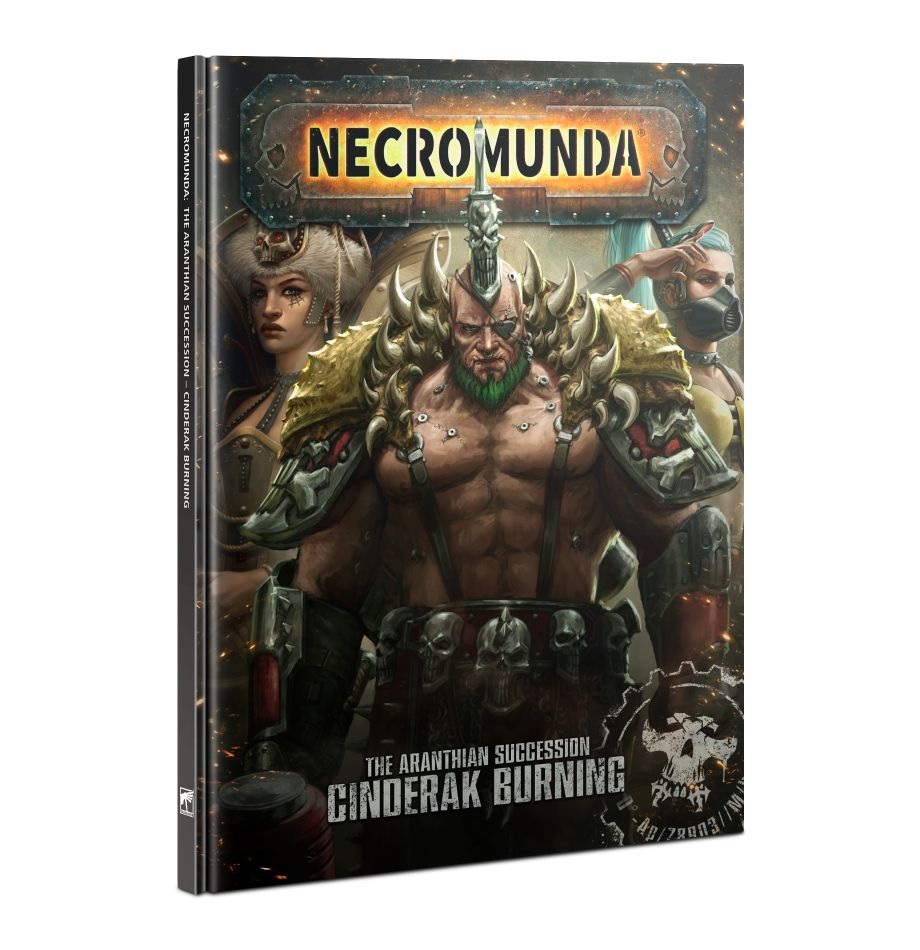 The Battle of Cinderak City – Birth of Rebellion 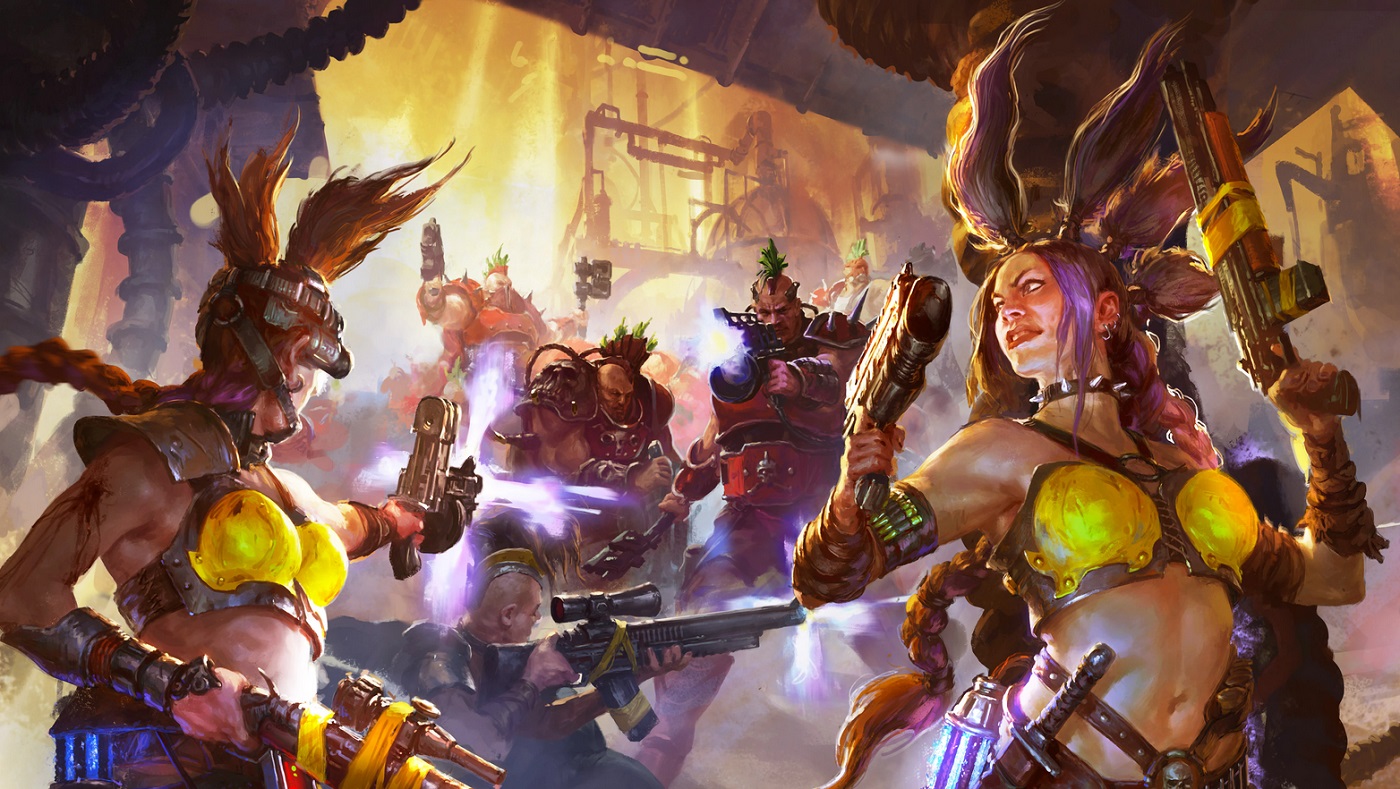 The final big lore bomb is the battle of Ciderak City. This is an all-out battle between House Goliath and House Escher (with the support of their allies in House Orlock and others). There’s a massive roving battle, there’s a giant bridge explosion, block-by-block city fighting…the works. At the end of it all, House Goliath has to retreat and House Escher is bleeding but steady. Lady Credo lends a hand and this essentially is the first phase of the start of a rebellion on Necromunda.

It’s teased that while the clan-houses victories might have kicked things off, the “crushing weight of the noble houses was about to reinsert itself.” So a war is coming to Necromunda. And it’s gonna be bloody!

Seriously, there’s so much stuff packed in 50 or so pages in this book. The foundations of Necromunda as a planet and setting are really getting shaken-up. The Great Blackout, the surface storms, the Chaos/Mutant uprising, the house drama, the assassination attempt, the power vacuum, the rebellion, and the two new leaders and SO much more is jammed in this one. If you’re a fan of Necromunda and just want the highlights, there’s a really cool timeline you can skim to get (mostly) caught up, too. 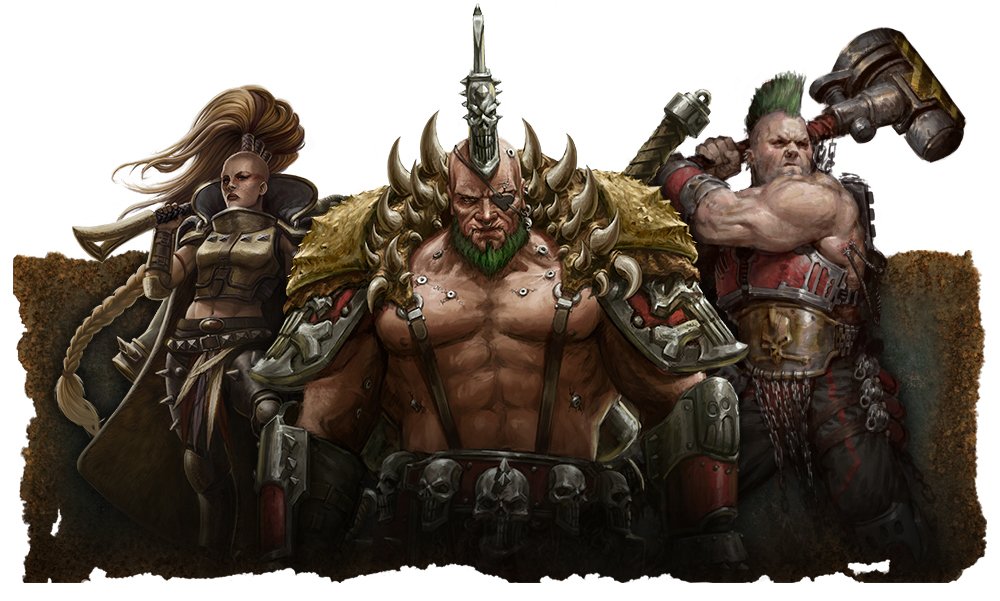 TL;DR – Necromunda’s story is moving beyond gang-fights in the hive. It’s getting crazy on that planet.

Author: Adam Harrison
Writer, Editor, Texas Native, and Austinite for 15+ years, Adam covers all things Tabletop Gaming. Which includes Warhammer 40,000, Age of Sigmar, D&D, Board Games and everything else that involves dice, boards, cards and a table. A hobbyist, player, and collector of miniatures and games, Adam's current obsession are his Death Armies for Age of Sigmar, his Blood Angels and Tyranids for 40k, and his ever growing Arkham Horror: The Card Game Collection.
Advertisement
Editorials Games Workshop Lexicanum Lore Necromunda Warhammer 40k
Advertisement 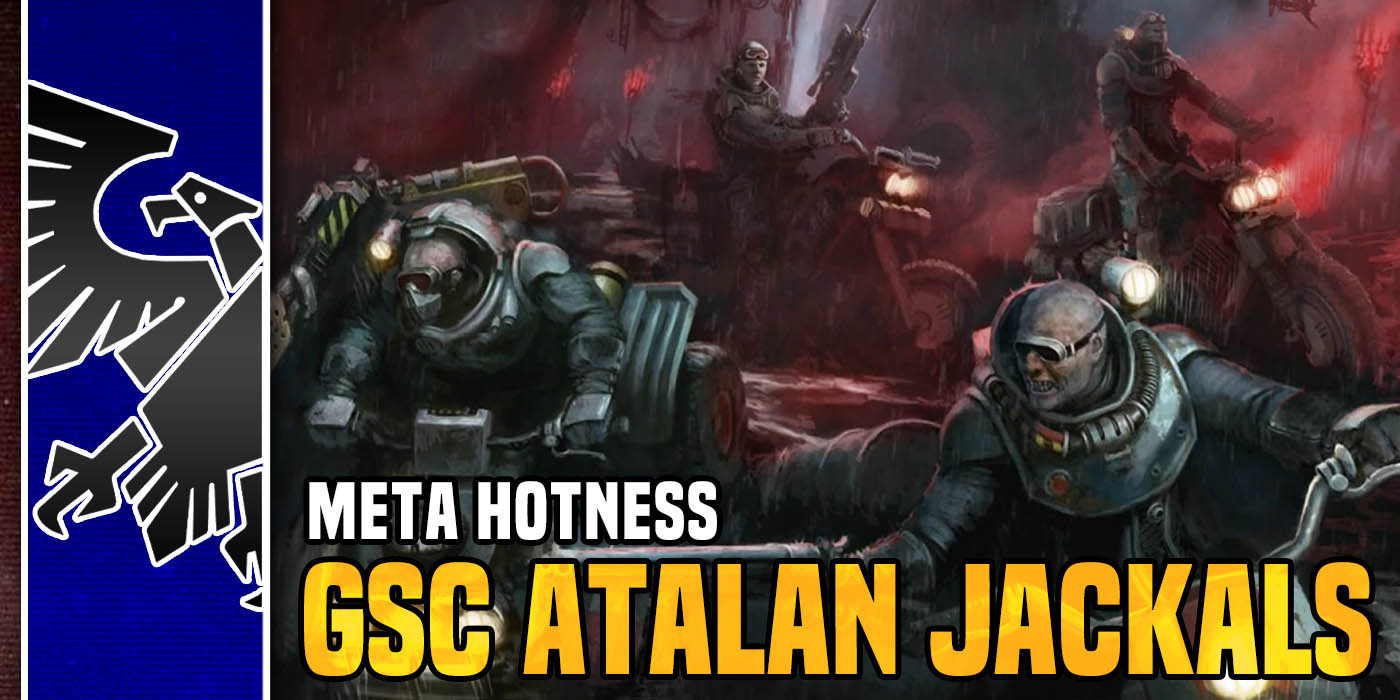