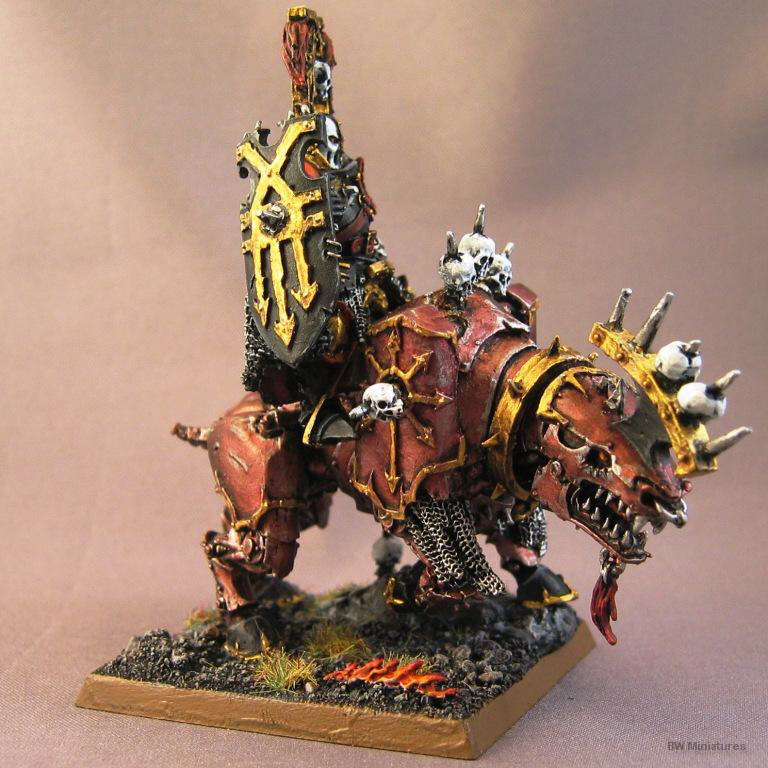 This past week I made a brief return to one of my favorite ranges, the one that started it all for me hobby-wise about twenty years ago, Chaos Warriors. Painting the new Khorne Lord On Juggernaut immediately reminded me why I became enthralled by GW miniatures in the first place. The monstrous, arcane nature of these sculptures captured my imagination like no other miniatures all those years ago and they still do so today. Chaos is the “cat’s meow” (or perhaps more appropriately, the “daemon’s howl”) for me when it comes to miniatures, whether it’s Fantasy or 40K.

Whenever I approach a miniature like the fantastic new Khorne Lord On Juggernaut, I always spend some time considering exactly what palette of colors I’m going to use to paint it. Even when I decide to stick to the common conventions of color laid down long ago in the earliest Realm Of Chaos tomes, I usually look for some manner in which to individualize the execution, at least a little bit. In this case, I chose to experiment a bit with metallic paints and washes for the fearsome beast upon which the Khorne Lord rides. I used several coats and a combination of colors to get a proper red metallic color.

Of course, the first order of business is to get the model assembled. Being a large, multi-part metal model, this did take a while with numerous holes drilled for pins. I pinned both arms, the head, and the body is held in the saddle and on the mount with a piece of 1/16″ brass rod. However, at this stage, the rider is only sitting upon the mount for a photo opportunity, I did not glue the rider to the mount until it was nearly completely painted. Once the rider and mount were assembled, I set about basing the model with some putty, some bits that came with the model and a Khorne rune from the Chaos Vehicle Hatch Sprue from the 40K range. After basing, I set about priming the model black and painting the Juggernaut. A combination of metallic paints and multiple washes were used for most of the model. The base was painted with black, brown and grey. Finally, I painted the rider. I decided to leave much of his armor black to contrast with the metallic red of the daemonic living metal beast upon which he rides. When the rider was nearly finished, I glued him to the mount for final highlights and details. A rear view of the completed model. Throughout the painting process I tried to limit the palette of colors to keep a strong theme and avoid a “busy” look. The fur color is black highlighted with greys, again to contrast with the red of the mount. Painting this model really reminded me why I continue to collect new and old Fantasy Chaos miniatures in spite of my huge hobby backlog. It’s an imposing, fun model and it was exciting building and painting it. My compliments to the sculptor.

For a while anyway it’s back to 40K for me. I’m in the middle of fulfilling a long delayed hobby dream of creating my own Space Marine chapter with a rather large number of models, so it may be a while till I return to my first hobby passion of Chaos, but rest assured I will as always return to it. I’ll probaby intersperse Chaos projects with my Space Marine army project just to keep things interesting. I’m looking forward to a horde of Chaos projects for Fantasy and 40K.

So what model started it all for you? What miniature or range of miniatures first ignited your need to build, convert and paint fantasy models?