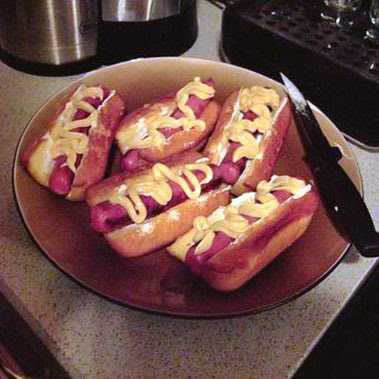 For me the twinkie wiener cards comes in the form of Space Marines, at least for my area. Which I am sure it not an isolated occurrence. I just want to know how it feels to have my armies be hit by a rail gun or pie plated by a basilisk. Now I am not about to jump on the corpse of “I hate Space Marines because GW does not love my Xenos enough” bandwagon. It also has nothing to do with the people I play. I am just stuck with a heavy Space Marine player base.

What it has to do with, is just how isolating a local gaming community can be. It is also the reason so many of us turn to the Internet, trying to get a whiff of what it is like to play other armies. It also could be why I suspect a lot of Internet blowhards (me including) make grandiose claims about this and that without any real life practice. So what is the cure to avoid your 40k muscles from atrophying from your steady diet of twinkie wiener sandwiches.

Simple, get out more. Even if it means going to GW store and beating up on children during game tutorials…well maybe not that far. Go to a tournament regardless if you are a competitive player or not. Go take the extra drive to play at another store. Go search forums and find local players in the same predicament as you.

Importantly, I started to think about how different parts of the country might have different twinkie wiener sandwiches. It also got me seriously thinking about the unreliability of the truly unreliable nature of online advice. Not only do we have to go through the filter of people with certain agendas, you also have to wonder what they are basing it on. If they think that playing against the same ten people in the same local area is perfectly representative of 40k as a whole, well they might not have the ingredients to make even one twinkie wiener sandwich.

I am not saying experiences against the same players are not important, you just cannot expand your creative or competitive potential without an influx of new experiences. As for the Internet it is the difference between a theory and well-tested theory; do not take what you just read and preach it as gospel, test it out first before getting burned at the stake, like Giordano Bruno…stupid heliocentrism.

If you want more travel with me to www.bloodofkittens.com