Warmachine 101: How to Start 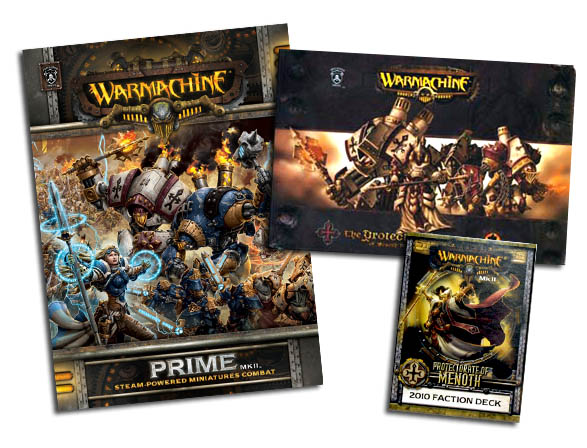 So you’ve seen the models.  You’ve read the articles.  Now you’re thinking that Warmachine could find a place in your wargaming case.  Here’s some suggestions on how to start on your journey into the Iron Kingdoms.

I am not a Pressganger (Privateer’s version of GW old Outriders), but I have worked closely with several Pressgangers to help bring new players into the game.  I’ve seen some stick with it, and others get frustrated and quickly drop it.  Here is what I’ve learned from those experiences.

1- Pick a faction.  There are no “Necrons” in Warmachine or Hordes.   There are no old or underpowered armies designed for the old rules.  Everything was updated for MkII.  The factions are very well balanced against each other, and since both games are 100% compatible on the tabletop, choose the army that appeals to you most for whatever reason(s) you like.  Once you pick your faction, grab Warmachine Prime MkII, and the 2010 Faction Deck for your faction.  The faction source books are a great resource, and will reveal tons of background information and special force compositions for your faction, but that info isn’t necessary when you first start out.

2- Find a local group that plays the game.  Just like with 40k, it’s a lot more fun when there are more opponents.  If no local group exists, or you simply don’t get along with the ones who do play, then go in with a few friends.

3- Get in touch with your local Pressganger (where one is available).  These guys and gals know the game, and can help you through the rough spots.

4- Don’t be afraid to start off small.  Pick up a Warcaster and a couple of jacks. One neat feature of Warmachine that many other systems don’t offer is that it scales very well at different points.  Let’s be honest, WHFB and 40k don’t really feel right until you reach 1000 points and some armies aren’t even competetive until you get higher than that.  Smaller games of Warmachine and Hordes will loose some of the synergies, but will still ‘feel like Warmachine’.  Play games at the battlebox level; roughly 15 points if you’re choosing other Warcasters or Warjacks.  Play a bunch of games at that level until you get comfortable with the rules.  One other nice thing about this scaling is that you can spend a little money on a battlebox to get a taste for a faction, and if you decide you don’t like that factions’ playstyle, you’re not out hundreds of dollars.

5- Be patient.  There are many, many, many different units and casters spread across the games and a lot of things to keep track of.  A great deal of your success will rely on having at least a general idea of what you’re facing and what it can do to you.  If you played two games per week against a different Warcaster and/or Warlock in each game, then you would be playing for a year before you will have played against every caster available.  Don’t be afraid to ask to see your opponents’ cards to learn what his or her units can do.  Don’t be surprised if you lose pretty often at first against more experienced players.  Take it in stride, try to learn from your losses, and improve.  Playing smaller games is one way to make this learning process easier since you’ll be exposed to fewer potentially new units in each game making for less chance of information overload.

We have a number of players starting Warmachine here in Austin.   Some are returning to the game after having dropped it years ago, others are compeltely new.  If you’re like them, why not start a post about your battles and experiences?  The Privateer Press area of the Lounge has a number of very helpful posters who would probably love to hear about them. Lux out