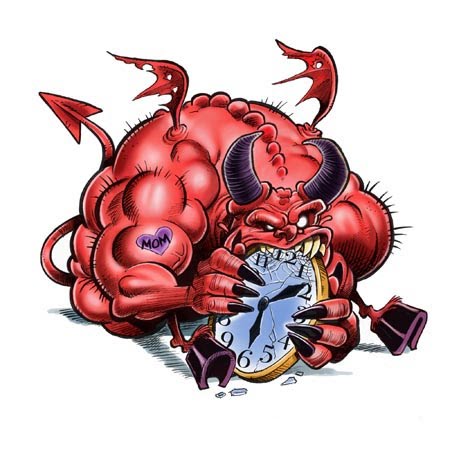 WarGames Con is only a week away, and I’m feeling the time crunch. How about you?

For those of us that have demanding jobs, family obligations, and are in school it can be hard to find the time to play, let alone get prepped for a large scale con. I’ve spent the last few weeks scrambling to get things done between shifts and classes – modeling/painting, playing as many games as possible to get my army list down, and gathering tools to make games go more smoothly. This is my first con, so my to-do list is rather large. Did I mention I’m a flagrant procrastinator?
I have managed to fit a game or two a week in with my work and class schedule over the last month in order to learn the finer points of my list, and try new tactics against armies that continue to kick my butt. That just took some creative scheduling and convincing my body that sitting around after my shift was over wasn’t an option. So far, so good on this – the one thing I like doing the most out of the whole list.
Thanks to suggestions here on BoLS, and some from my local group, I’ve put together some tools that act as crutches for my math disability, and manage to keep things in order:
• Koplow Games dice – they combine color recognition for me, and pips for my opponents – and they’re reasonably priced
• Chessex gaming stones –  to mark wounds and such – I want to make a custom battle marker set at some point, these work great for now
• A mini magnetic dry erase board – to keep track of combat, and take notes
• 1.5″ binder w/storage pouch – houses all of my quick reference sheets [in plastic sleeves I can write on, and wipe off], pens, dice, etc.
All of these aids have been invaluable additions to my gaming kit – I highly recommend trying some of these to help you keep organized while gaming if you haven’t.
My biggest crunch has been painting. I’ve been playing an unpainted army for 2 years because I find the task daunting and, well, I’m lazy. I had to use proxies in the forms of Chaos Space Marines, a couple of Battlefleet Gothic ships, some empty movement trays with dice on them, and a magnet for my last game because everything is on the work bench.

I started to work on my dogs and flamers last Sunday and am hoping to have them up to three color spec later today. I’m hoping to find the time to put together some sort display board, but that will likely end up being a tray pinched from the hotel. Needless to say, my plans of magnetizing everything have completely gone out the window at this point. I’m on a mission to have a playable army, the perfectly pretty army can come later.

To go with my to-do list is a list of expectations for the con, which is rather short: have fun, learn new things, drink beer, don’t get thrown in the pool while drinking said beer. This is not to say that I’m not nervous – I am. Extremely. I’m not expecting to end up in the winner’s circle, or even avoid the loser’s bracket on day two. I’m just going to play and party a weekend away with a bunch of fellow gamers. A much needed break from the rest of my life. *wash, rinse, repeat* 😉
What are you doing to prep for WarGames Con, and what do you want to get out of attending?
PS – Like most of the BoLS bloggers, I’ll be toting a camera with me all weekend to capture the fun. So, if you can find me, say hello and let me take a picture of your game/army/choice of beverage/etc.