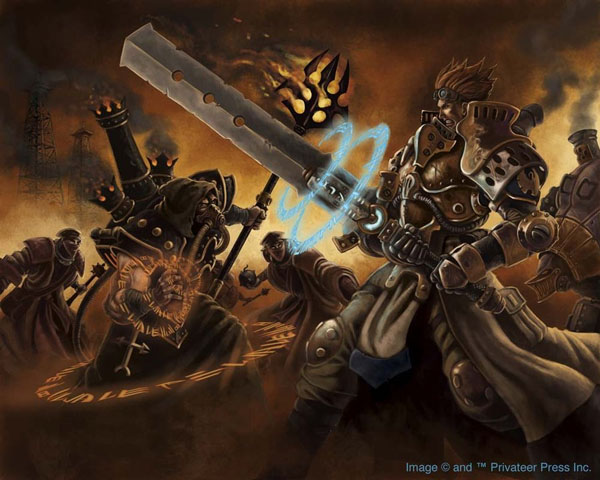 Making a successful list in Warmachine or Hordes is a matter of playing towards strengths and mitigating weaknesses. Lets take a look at how to get your force up and running.

There are several ways to start a list, like picking a unit, warjack, or warbeast that you’d like have in your list and building around it, but the most common and often sensible approach is by starting with your warcaster or warlock. It is the most important model in your army, so it’s probably smart to make sure you are building a list that will compliment your warcaster or warlock appropriately.

When building your core, it is often best to look for models that will get the most benefit from your spell list. For example, a spell like Haley’s Deadeye is fantastic for boosting units with RAT values of 5 or lower, so things like Trenchers and Long Gunners can get a lot of mileage from it. The additional attack die is also a fine buff for ranged units like Arcane Tempest Gun Mages that have potent critical effects. A spell like Darius’s Fortify is often best used on warjacks with already-respectable ARM values like Stormclads, Centurions, or ‘Ol Rowdy, making a resilient warjack into a walking tank. When you start constructing a list or making an early purchase, look at what spells and abilities your warcasters or warlocks have and exploit them as much as possible with your other model choices.

Once you have a solid core of models that works well with your available spell list, unless you are playing in a game under 35 points, you should still have plenty of room left for making up for any weaknesses not covered by your core and for adding in supporting models. For instance, a core list for a 50-point Absylonia army might consist of a Gatorman Posse to take advantage of Carnivore, an Angelius for Forced Evolution, and a Carnivean for Playing God. Already you have Gatormen as solid anti-infantry (referring to groups of single-wound models) and the Angelius and Carnivean for anti-armor (referring to multi-wound, high-ARM models). It’s worth noting that on the charge, Gatormen are fairly capable in the latter category as well.

Unfortunately, this is a pretty melee-heavy list, so for balance it might be a good idea to invest in a ranged unit that does not require a lot of support to do their job. A unit of Blighted Nyss Archers with the Unit Attachment would fill that role nicely, adding a defensive anti-infantry ability, terrain mitigation, accuracy, and punch. Not only does this unit provide a solid ranged element, but they are also effective against a wide variety of targets.

Moving on from there, you will probably want another warbeast in your list for fury production over the course of the game. A Shredder makes a nice, cheap damage transfer target, is great for solo hunting, and comes with an animus that stacks great with Forced Evolution, effectively granting +3 DEF and +1 ARM to the target. Since Absylonia will often want to play a bit forward, investing in a Nephilim Protector for defense against ranged attacks and knockdown abilities is not a bad idea either.

Looking at our army, we are 41 points into a normal, 50-point build. With those last nine points, it is not a bad idea to check our list for trouble spots and add support accordingly. With four warbeasts, a Shepherd is a good idea to add in. It will augment your ability to manage fury, give another way to heal your warbeasts, and effectively increase Absylonia’s control area.

At this point we have a strong collection of warbeasts selected to benefit from Absylonia’s spell list (Carnivean, Angelius) as well as provide support to her and her warbeasts (Shredder, Protector), a unit of Gatormen for clearing out infantry, Archers to bring self-sufficient ranged assistance to your army, and a pair of Shepherds to help manage your warbeasts. We have a pretty strong list, but there are still eight points to play around with. This can be filled in a number of different ways. You can add in a minimum unit of Bog Trogs for flanking threat, a unit of Striders for ranged skirmishing, or the Nyss Sorcerous and Hellion for anti-Incorporeal and anti-ranged support. I’m personally a fan of Bog Trogs, so I’ll add them and a Totem Hunter for flanking and harassing.

I should add the disclaimer that this list wasn’t designed with the intent to take Gen Con Masters by storm; it is an exercise in demonstrating the process of list building. I have never played with it, so how it performs is a mystery to me, but it certainly looks like fun. Obviously, playtesting this list may show that certain models might be unnecessary or that there may be better choices based on your local meta. As mentioned above

Stay tuned for Warmachine/Hordes: List Building 201 where we discuss redundancy and balance.

Author: Larry Vela
Dad, Gamer, Publisher, Pilot, Texan. All games all the time since junior-high. I started BoLS Interactive in 2006. I’m a lifelong tabletop & RPG gaming enthusiast, and internet publisher working to entertain and inform my readers every day. I've been playing RPGs and Tabletop Games since the 1970s. I'm been playing and covering Warhammer and Warhammer 40K for over 35 years.
Advertisement
Armylists Legion of Everblight Tactics Warmachine-Hordes
Advertisement