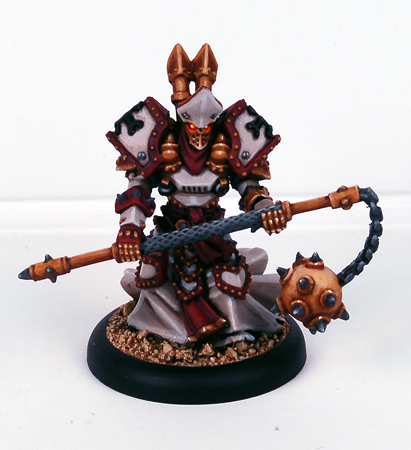 Hey guys, Col. Festus here! It’s been awhile since my last post so I decided to put up a good one! Time for another Master Class, High Exemplar Kreoss.
So life has been pretty crazy as of late. I haven’t had too much time to paint and blog but it looks like things are starting to get back to normal around here so I’m hoping I can get some more projects done. With the release of the new Battle Boxes from Privateer Press I decided it was time to start my showcase force for Warmachine. The Protectorate of Menoth has some of my favorite miniatures that the company makes and so I found it fitting that I would paint up a show case army using them.

As a painter I find the best way to learn is to push yourself outside of your comfort zone and experiment. Read some articles online and then apply what you have learned with your own twist. This way you can really develop a style of painting unique to you. I recently have been painting a lot of “realistic” models. Anyone that has seen my Khador `jacks knows what I’m talking about. Lots of weathering, and grime very suitable for a Khadorian Warjack. So when I decided to start a showcase army I wanted to apply many of the techniques that professional painters utilize to such great effect. Namely non-metallic metal painting (NMM for short) and object light source (OLS). These are two techniques that have really intimidated me as a painter. I was able to pull of a pretty good OSL on my Avatar that I outlined in my first Master Class installment, but I wanted to try it out on smaller models, namely infantry.

So with goals in place I began the project by cleaning the model with soap and water. These new battle boxes are plastic so be sure to use cold water or you can warp your figures. Once that was done I cleaned the model of mold lines and put him together using Gorilla Glue: Super Glue (Fantastic stuff A++). With these things done I wanted a reference for when I was working with the model. I took out my trusty iPhone 4G and snapped some pictures with a single source of light from above. I then took these images and turned them to gray scale and upped the contrast in photoshop. Here was the result:

I repeated this from all angles and then set to work. In order to get my colors right and the feel I wanted I used the artwork in the beautiful Forces of Menoth book.I chose my color pallet carefully to best reflect the feel of the artwork. I settled on Deneb Stone for the armor, and a series of browns and yellows from the foundation paint line to work on my NMM gold. The reds would be done with a series of mixing utilizing the foundation paints as well. I will touch on each.

The most comments I received about the mini were about the eyes. I will touch briefly on the topic here and how I achieved the glow. The combination of colors  is quite straight forward. I drew a little cartoon to help illustrate the technique.

Once the eye and mask were painted I went back first with blazing orange and put a thin ring under each eye, followed by a 1:1 highlight on that with Sunburst Yellow and Blazing Orange. Once dry a final thin strip of pure Sunburst Yellow was applied. I did not highlight all the way up to the final mix on the eye as you never want any part of the reflection to be brighter than the source on the model. So with that done lets talk about the gold.

The gold was the most challenging part of this miniature and as such I will talk about it a little more. First off I took a look at the image I posted above with the single light source, and also at some images in the forces book. I knew I had to do some series contrasts so I started off with a pretty dark color, in this case Calthan Brown and worked my way up to pure white. Once finished a wash of Gryphonne Sepia tied it all together. The color progression can be illustrated here in this cartoon :

The whites I thought would be the hardest part of this model, but once again GW’s foundation paints have saved the day. For extreme contrast I started with a dark color and worked my way up to put skull white once again. The majority of the robes are Deneb Stone with only the sharpest lines being Skull White. The contrast pictures here were key for me. I started with Khemri Brow washed with Devlan Mud and worked my way to pure Skull White.

The reds were done fairly easily. I started with a 1:4 mix of Mordian Blue to Mechrite Red. Washed it with Leviathan Purple and then highlighted it with Mechrite Red. The NMM greys I also kept simply started with Adeptus Battle Grey highlighting with Codex Grey, Fortress Grey and finally White.
The base I kept simple and I’m still trying to decide whether or not to add some silfor prairie tuffs. I base coated with Desert Yellow, and dry brushed white Bleached Bone. Once that was dry I washed it with Gryphonne Sepia. With that complete the model received 3 coats of varnish. I started with Future Floor Wax, then Liquitex Matte Varnish, and finally Testors: Dullcote. The finished result: ~All said and done I think this might be the best model I have yet painted. I’m extremely happy with the  NMM work as it was my first time and only expect to get better as  I work on this army. As always if you have any questions feel free to ask them in the comments section. You can also reach me at [email protected] or drop by my blog First Rank, Second Rank! 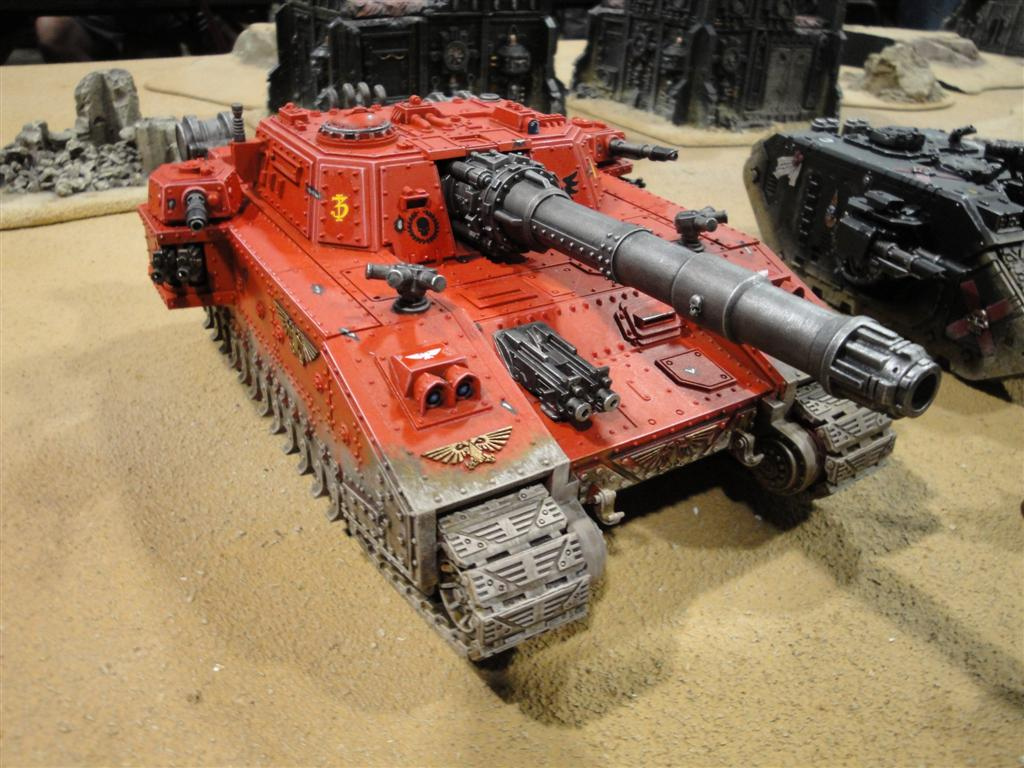