Those of us in Austin are all familiar with the awesome that is Bryce963 – I met him while working at an FLGS. He’s been gaming off and on since about 2000, had his glory days in Austin, but has now moved to Lubbock to go to law school. He has a Space Wolf army currently, but has played several others over the years. Along with his fellow student, Jack, he runs a blog at dissentingdice.blogspot.com, and will be attending WARGames Con in the team tournament, and also Wasteland Wars up in Lubbock.

Recently Jack and I both took the MPRE (Multistate Professional Responsibility Exam), part of the Bar admission requirements. Professional responsibility, especially the exam, is not really about ethics and it sure is not about morals. It is about how to abide by the rules of the legal profession as laid down by the ABA (American Bar Association) and the States.

First, by way of disclaimer, I am not a licensed attorney; nothing in this article is to be taken as legal advice or explanation. I can answer no questions on the law; consult with an attorney licensed in your jurisdiction. Furthermore, this is a fairly shallow article; just comparing two rules based systems, in the words of Wil Wheaton: don’t be a dick.

The legal profession is bound by rules that attempt to prevent bad behavior and protect the public from the potential havoc a lawyer can cause. In our games, here I will be using 40k for an example, we are bound by rules that make up the game we are playing.

These are both systems that put everyone on the same playing field; therefore skill and preparation can win the day, unless someone cheats. This can be something as simple as moving/measuring oddly, or slow play, or in the legal profession too much witness coaching or not revealing precedent adverse to your case. In either instance this can be totally harmless and innocent, or someone can be trying to get an unfair advantage.

You may have misread the tape, or moved something a little off, or bumped it. All of these are accidental. You might not be decisive and contemplate too long, or you could be trying to cut down the amount of time you and your opponent have to play a game to its completion. In the practice of law you may not know of a brand new case; or it may only be persuasive and not binding in your jurisdiction, and therefore not required to be disclosed. Or you might ask your client to think about just how upset he was finding that guy with his wife, how he felt, maybe he was crazy; you didn’t say that, the client did. Any of these situations can be innocent or malicious. It just depends on the intent, and perhaps the results. But in gaming one can be kicked out, or not, with the final prize – but in the law it might be someone’s life, liberty or property on the line, and can lead to sanctions and even disbarment.

Let’s get a few examples in here. Here is the Wound Allocation Rules page 25 of the 40k Rulebook:

“Of course many units include different models, and when this is the case an extra step is needed to determine which warriors have been hit by which weapons. This is worked out as follows:

Once the number of wounds caused by the firing unit has been determined, the player controlling the target unit must decide which models have been wounded, allocating the wounds to the warriors of their choice. Remember that any model in the unit can be wounded, not just those in range or in view.

The player must allocate one wound to each model in the target unit before he can allocate a second wound to the same model.

These are all steps to be taken in a particular situation, that of would allocation to non-same models. This allows for all sorts of fun tricks, the least of which is shown rather simply in the example on the same page: making a melta would and an additional wound disappear. On the next page multiple wound models are covered. We know how that comes out, TWC!
Advertisement

Now here is a section from the Model Rules of Professional Conduct:

“Rule 3.3 Candor Toward The Tribunal

(a) A lawyer shall not knowingly:

(2) fail to disclose to the tribunal legal authority in the controlling jurisdiction known to the lawyer to be directly adverse to the position of the client and not disclosed by opposing counsel; or

(3) offer evidence that the lawyer knows to be false. If a lawyer, the lawyer’s client, or a witness called by the lawyer, has offered material evidence and the lawyer comes to know of its falsity, the lawyer shall take reasonable remedial measures, including, if necessary, disclosure to the tribunal. A lawyer may refuse to offer evidence, other than the testimony of a defendant in a criminal matter, that the lawyer reasonably believes is false.

(b) A lawyer who represents a client in an adjudicative proceeding and who knows that a person intends to engage, is engaging or has engaged in criminal or fraudulent conduct related to the proceeding shall take reasonable remedial measures, including, if necessary, disclosure to the tribunal.

(c) The duties stated in paragraphs (a) and (b) continue to the conclusion of the proceeding, and apply even if compliance requires disclosure of information otherwise protected by Rule 1.6.

(d) In an ex parte proceeding, a lawyer shall inform the tribunal of all material facts known to the lawyer that will enable the tribunal to make an informed decision, whether or not the facts are adverse.

This is a list of alternate conditions that handle variations of a situation. This seems rather less open to interpretation and abuse. However, direct your attention to the word “knowingly” in 3.3a. Defined in Rule 1.0 (f) “Knowingly,” “known,” or “knows” denotes actual knowledge of the fact in question. A person’s knowledge may be inferred from circumstances. You have to actually know about it, or it can be inferred that you had actual knowledge.”

There is a lot of leeway in how you handle the situation if it comes up. Your client may be lying, or going to have a witness lie, you might not know about it. If you find out five minutes before they testify, what remedial measures can you take right then and there? You don’t have time to dissuade them, or tell the judge. But you could just not ask them about the subject matter of the lie. Or in an extreme situation not even ask them anything at all.

Rules may not be made to be broken, but they are made to be bent or gotten around. Both of the above rules can be bent, and both are designed to be – making wounds go away, or the use of “knowingly” set out in 3.3, or any of the other work-a-rounds you can find.

So with those examples, what is the connection? At least with statutory law, which is a set given set of rules, you have several tasks: understanding, interpreting, and applying. These are the same with game rules as well. There is ambiguity in both the law and gaming rules.

First you have to understand what it actually says, or read the Rules as Written (RAW). So go read the two above rules again, what do they say?

Then we have to figure out what they mean, or the intent behind them, the Rules as Intended (RAI). That could be a FAQ or the comments to Rule 3.3, or case law interpreting the rule.

The RAW and RAI concepts apply just a broadly to the law as they do to gaming. There are arguments on the same things, though they happen in the courts and in law school classes, not on internet forums. Though that doesn’t necessarily mean they are any more congenial. These two concepts have helped me as an analytical framework to understand cases and statutes that we have read in school. The next step is applying them. This is the fun part. You have to figure out how to use the rules as written and interpreted. This could be all of the so called shenanigans caused by skillful wound allocation, or figuring out how a rule or case applies to the facts of the case you are working on.

The rules based analysis that I learned in playing games such as 40k or D&D has helped me in law school. Both are systems bound by rules, with unclear meanings that may or may not have authoritative interpretation. Those making passionate arguments about whether the Doom of Malantai affected models in vehicles (in light of the rules and Main Book FAQ, I have little idea how they came to defend that conclusion) could use those skills on behalf of clients in a courtroom.

The analysis and interpretation are not as different as one would think. The situation your client is in might actually be different than what has happened before, and a novel legal argument must be made. Such as BuFFo’s interpretation of the word “line” in regards to Dark Eldar bike movement, but one lawyer with a cause and a new take on something is how the law gets changed.

How has rule interpretation affected your gaming experience?

Author: The Girl
The Girl is a tabletop Games & miniatures professional with over 15 years of experience in the industry. Her specialty is the world of Games Workshop's Warhammer lines of products. She began writing for BoLS in 2010.
Advertisement
Editorials Warhammer 40k
Advertisement 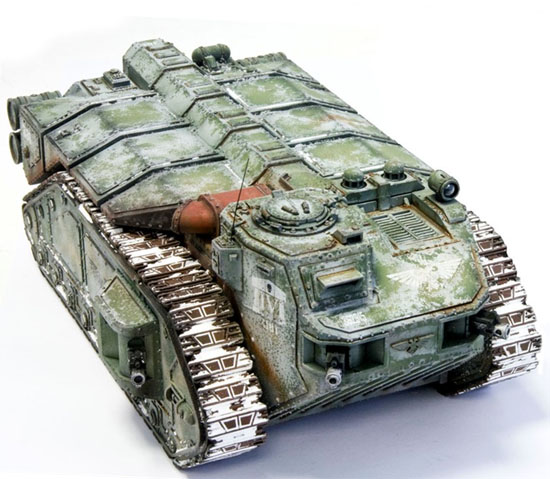