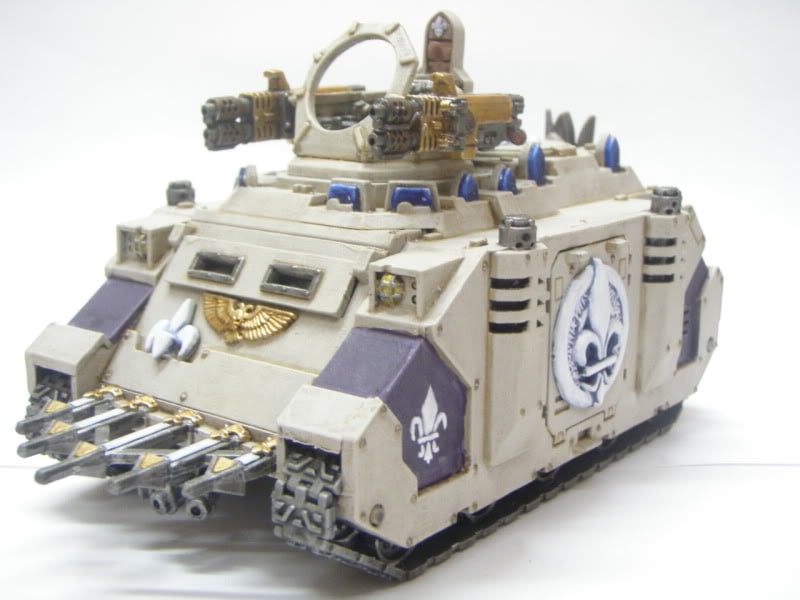 So Sisters of Battle. There’s no denying their codex got a big kick in the ovaries.

Their main transport – the Immolator, got nerfed despite being comparable in points to a Blood Angels Razorback with a Twin-linked Heavy Flamer and across the board they got for the most part, price increases without significant gain (and it could be argued – significant loss).

Now, this was a White Dwarf codex and I think anyone expecting the next best thing to come from here was being delusional but there was certainly hope for it to not be terrible. Cruddance disabused us of this notion (he’s 1/3 now in producing good books). What I’m going to do in this post is do a quick and dirty review of the codex to see if we cannot find any hope for Sisters of Battle players out there. This is done with minimal play-testing (I got several games in on the weekend) so bear with me here and will focus on general army mechanics and some good, okay and bad points of the codex. I will be posting a full review on 3++ is the new black once I get some more games in but for now let’s dive in.

I both like and dislike the new faith system. D6 Faith points for the whole army at whatever points level is crap. It’s certainly simpler to keep track of but it’s far too unreliable and doesn’t scale at all. The problem with this unreliability is it makes Jacobus a near mandatory inclusion into any SoB list – whiners proceed to complain about special characters not being special now. Add in you cannot store Faith to use on one ‘big turn’ and not looking so good. A better system would have been something like 2D6 and pick the highest – whether standard or for Jacobus – and/or allow them to be cumulative. This would require some book keeping but would be a lot easier to keep track of for your opponent than in previous incarnations.

The actual pass/fail system is okay – easier for everyone in terms of knowing if something has passed or failed but probably a little less reliable. Individual Faith acts help to differentiate each unit as well and makes them feel more unique but it feels like a lot of this overly influenced their points cost. All in all the system is okay but there is a lot of griping about losing 3++ in combat and rending bolters/flamers. Yes this hurts but doesn’t really neuter the force – mass bolter fire can still work. Simulacrum Imperialis really help in ensuring your Faith is pretty reliable as well. For most squads it’s a base of 4+ and can often be a 3+. Add in Simulacrums and you are looking at a system which is probably more reliable than the previous incarnation though I haven’t bothered crunching the numbers. They aren’t exactly common though, nor cheap and affect on the individual unit.

So what do we get with a SoB army? Short-ranged, power-armored chicks. With boltguns, flamers, meltaguns, multi-meltas, heavy flamers and heavy bolters are the norm here and outside of the Exorcist or mass Heavy Bolters (with Rending), Sisters of Battle have a hard time affecting the battlefield at range. Losing their fast transport status with Heavy Flamer Immolators hurts here as no longer can you move forward quickly to get your short-ranged guns into range, hop out and still flame people. Whilst you can still do this at a lesser speed or without Immolators at all, your tactical flexibility on the table-top is hampered. What we want the SoB army to be able to do then is get up into your opponent’s face, shoot lots of close-ranged weapons and not die. The new access to counter-assault units like Death Cult Assasins help a lot here but ultimately the army has little combat prowess, little ranged ability and aren’t cheap enough to overwhelm other MEQ armies.

I certainly think you can get some decent army builds out of this book though they aren’t going to be exactly a bag of tricks but you don’t have many options in terms of list design and I doubt the lists are going to get up there and challenge the 5th edition armies. It’s certainly one step forwards in some things but steps backwards overall. Let’s take a look at some positive, so-so and negative aspects of the new codex.

Neh. Again, it’s not terrible and I foresee quite a bit of Jacobus/Confessor/Kyrizmov/Celestine + double special HQ units with Dominions w/transports, 2x Exorcist, Retributor Squad and then a bunch of Sisters in Rhinos – maybe some Celestians to get some other Immolators. It’ll be decent without being great and won’t have the tactical options old Witchunter players are used to.

This comes across as a codex directly aimed at nerfing what the old Witchunters codex had going for them. Namely Immolator spam, IG platoons for fire support and crazy acts of Faith. Good old knee-jerk nerf bat at its finest without any consideration for what the army will actually do. Whilst this does let Games Workshop off the hook to an extent in terms of not needing to provide models/rules for Sisters of Battle for several years (or so they think),  I doubt any Sisters players are happy. There are still some diamonds in the rough but overall, well Cruddance and White Dwarf fell short again. Take a hint Games Workshop :).

The floor is your’s Generals…

Author: Kirby
Kirby Enthusiasm is one of the well-known players in the Warhammer tabletop gaming community. He is the man behind the 3++ website, and a Warhammer 40K competitive player. He began writing for BoLS in 2011.
Advertisement
Editorials Rules Sisters of Battle - Adepta Sororitas Warhammer 40k
Advertisement