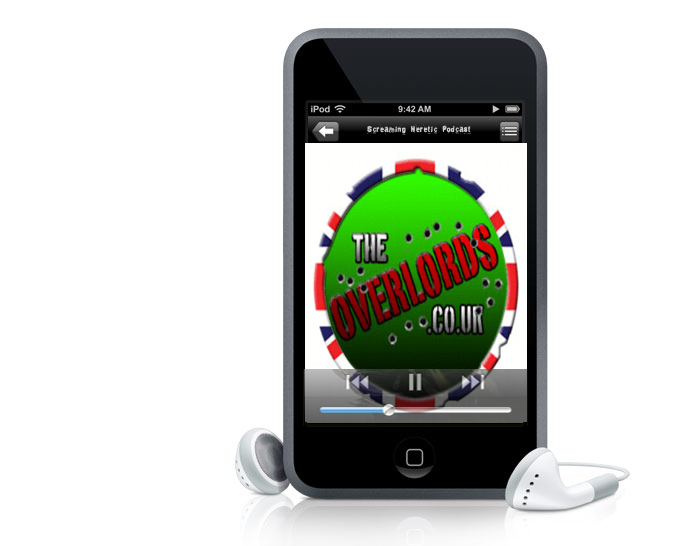 Highlights: This week, after the usual introductions the boys open up the show with some news in 40K and some new releases both GW and Forgeworld. They also talked about the most recent Black Library Releases as well. They close out the news with some talk about this year’s ETC. They then move on to some local Overlords news before catching us up on what they have been doing lately in the game and hobby. This included Mark’s ‘Ard Boyz experience and Sam’s massive amount of buildings for City Fight. Next up in Spru-Peter, Mark takes over the segment and this week talks about how to make craters on the cheap, mostly for use when vehicles explode. Then, in Steve’s Round Table, they guys discuss a couple of IG questions. First was the concept of the Guard ‘Blob’ squad and the benefit and failures of such a unit. They also take about the Commissar and if it is worth the points or not to put into your army. They close out the show this week by getting back to one of my favorite segments of their show, which has been missing for quite some time, Dean’s Dimension! This week, Dean and Steve finally get back to Part 2 of the story behind the menacing Tyranid race! They go in deep with some of the Tyranid sub-species and why they were genetically engineered the way they were.

Opinion: This was by far my favorite podcast of the week! As many of you already know I am a pretty big fan of this show to begin with, to then get back to one of my favorite segments on my favorite army in 40K! I loved it! A great show, I highly recommend it to everyone!

Highlights: This week the guys are missing Geoff who is of Virginia, but Carl and Zack take the reins and run with the show. The guys open up the show with their Hobby Progress which included building new GW terrain their goals for the next two weeks. They then move on to talk about the games they have played lately. Next up was the main theme of the show, the up side of 40K. They broke this up into two segments and in the first they talk about the benefits of game of 40K. They hit on social interaction aspect of the game, and the many aspects of what you can do to meet new players and make new friends thanks to 40K. They move on to talk about the tactical value of the game, the hobby aspect of the game, and the educational aspect of the game as well. In the next segment, the boys talk about ‘Why 40K now?’, and how great it is to play the game of 40K right now. They talked about some of the outstanding conventions available to go to, the major tournament circuit, the outstanding podcast community, and the overall success of Games Workshop in general. They also talk about the quality of the models, the longevity of the game itself, and the expansions which are making the game less stagnate and ever changing. They also talked about the wonderful plus of the models and model conversions for those models that there are not models for.

Opinion: This was another great show from the Independent Characters. The main topic for the show was near and dear to my heart, as I hear a lot of people in my local gaming area who are turning away from 40K for other thing, I, myself, am more resolved than ever that this is the game for me. Thanks guys!

Highlights: The gang is back and opens up their show with a little talk about their prep work for video coverage of the Nova Open 2011. They move on to talk about the games they have played in preparation for the Nova Open. Next up in Pat’s Corner, Pat talks to Sandman Mike about his Eldar list he took to the Railhead Rumble. Next, Pat talks to Sean who won Wargames Con with his Dark Eldar list, and they talk about his unusual list. Next up was an interview with Romeo and Kyle from 40K Radio as they talked about their inter-podcast challenge. After that was the 40K community segment, where they play the ads and announcements for some great upcoming tournaments on the 40K circuit. Then was ‘List of the Week’ and this week the boys discuss Neil’s upcoming Mechanized Guard list and what he wants to put in it. To close out the show this week the guys go into the “Game Plan” and this week they decided to a Tau army and they pit is up against a reserve Tyranid list, a Decent of Angels Blood Angels, and a Deathwing Terminator spam list.

Opinion: This was another good show from the 11th Company. Filled with tactics and fun, I loved this week’s show. I really like hearing what disgusting things Neil intends to do with his IG list and to hear of the poor tales of the Tau player. Buck up man, you’re codex is coming. Overall, a good show, and do not forget, the will be covering the Nova Open this year. Check out their site for video coverage of the tournament! Good luck guys!

Highlights: This episode is mostly a Big Fight Main event show. They open up the show with some undercards fights leading up to the main event, the Swarmlord vs Ghazgull! The first fight was a 20 Dark Eldar Hellions vs 30 Ork Boyz battle, and this one made me respect the Hellions! Next up was a bit Adam from Interesting Tactics (another good 40K Podcast) and they talk about the Banner Painting contest they will be holding for their birthday this year. Then, we get back to the event where we have a re-match between The Nightbringer and Mephiston, as that match ended in controversy last time. Up next was a pretty interesting match-up between the two best Terminator based units, and who would win if they crashed into each other? So they pit Lysander, a Liberian, and a unit of 5 Thunderhammer & Stormshield Terminators in a Land Raider versus a unit of 10 Grey Knight Paladins all kitted out differently for wound allocation. This was disturbing to see how good a unit of Paladins can be. Then, Mephiston is back and battling a squad of Grey Hunters, with a Wolf Guard and a Wolf Priest, and this one had a surprise ending! Next up in Operation Codex, the boys, minus Dave, go over the Dark Eldar Fast Attack choices. They give a full rundown, including rules and tactics for some of these amazing units. Then, they have a great segment where fluff comes into the game and they decided to pit Draigo from the Grey Knights against all 4 Greater Daemons! To close out the show was the main event, the Swarmlord versus Ghazgull!

Options: This show was a lot of fun! I really like how they tossed up some in-game scenarios to see what would happen. I would like to see more of this in the future. I learned to respect Hellions a lot more, and now have some better tactics versus Mephiston now thanks to this show. This is a lot of fun, so I’d recommend it for everyone!

Highlights: This week the full crew of Rob, John, Denis and Richard are joined by Kevin from Under Discussion. The guys open up the show by talking about building some terrain from the old Imperial City box set. They moved on to talk about their ‘Ard Boyz experience for Round One. They talked about the armies that they played and how their games went. They move on to the meat of their show, a multi-part rundown of Know Your Slots: Elites. This week, the guys focus on the Elite slot of your army and what units you can find there and how they change the game. They give a rundown of some of the best Elite choices in the game and how much fun is added from this slot. They close out there show this week with their hobby progress, which is mostly more terrain building.

Options: This is a great podcast overall and it is a shame it has taken this long to get them up into the top 5. Overall they have really experienced gamers talking all 40K, and the show is short enough to enjoy each and every week. I am really liking the Know Your Slots segment and looking forward to see what they do next. Check this one out!

Life After the Cover Save – Episode 33 ***Explicit*** – King’s Fan on the show talking about the Sci-Fi Genre.