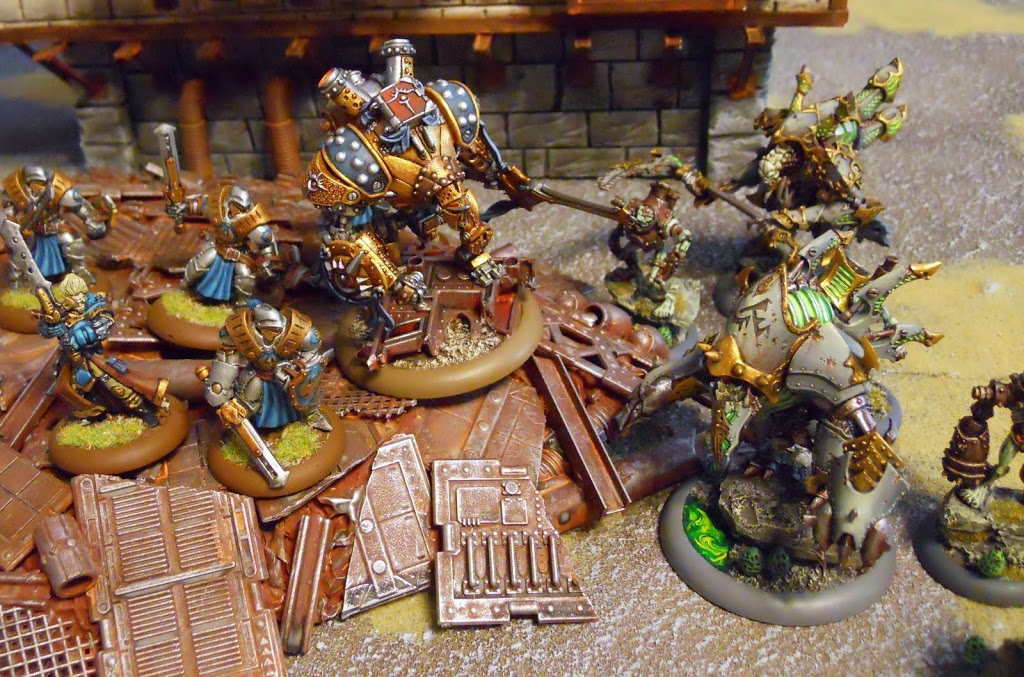 July saw the release of the second wave of warjack character upgrade kits. My paintbrush and dice have been busy.

Cryx, Khador and the Protectorate all got one of their own, while Cygnar and Mercenaries got an ally to share. Just like the batch released last year, these warjacks offer an interesting set of new rules and stat improvements that make them interesting replacements for the “factory standards” that we’re used to. So lets dive right in shall we.

Gallant is up first. This Morrowan Cygnaran Ally warjack has been shaped by the artificers of that church to serve as a divine instrument of war. In game terms, this means it has some really interesting special rules that can benefit both Cygnar and Highborn Covenant players. First off is its Accumulator (Morrowan) which gives it a free focus if it begins its activation within 3″ of a friendly Morrowan model. Really this just gives me another reason to want to take Harlan Versh; a Morrowan solo who is already a steal at 2 points. And if you’re taking Gallant in Constance Blaize’s theme force, you’ll have a hard time starting it’s activation without a Morrowan within 3″. If you do take it with Blaize it will get Purgation, giving it an additional die on attack and damage rolls against models with an enemy upkeep spell on them. Almost every caster in the game has an upkeep spell they want to have on something so it shouldn’t be too hard to get some good use out of this ability. Finally, Gallant has Shield Guard so once per turn it can take a bullet for a friendly model assuming it’s not stationary or incorporeal. Any help keeping your warcaster alive is always going to be welcome. In addition to its cool abilities, Gallant also has an extra point of defense over the standard Ironclad chassis warjacks. It also boasts a buckler, bringing it up to arm 19 and a magical weapon with the reach ability. Unfortunately it does have one minor drawback; the P+S on its main weapon only 17.

So is Gallant worth its 9 points? I think it can be extremely helpful in a lot of situations. It definitely deserves Auto-include status with Constance Blaize since the two have so many abilities that play well off of one another. For every other Cygnaran warcaster I’d say that Gallant is worth considering anytime you might otherwise take a Stormclad. You’ll lose a point of pow, a gun, and electro leap but you’ll gain shield guard and have an army point to spare. This means I think its best use with Cygnar outside of Blaize is Epic Stryker. Positive Charge will make up for Gallant’s Pow deficit while giving a warcaster who likes to lead from the front a model with Shield Guard to help protect him. I think Highborn players are the real winners with Gallant. Shield Guard is that much more helpful for a faction without Arc Nodes. Merc players have also been waiting for a warjack with a little more accuracy in the MAT department. I mean you want to make sure that the guy you just cast Jack-Hammer on is actually going to hit right? And in a faction starved for focus, the Morrowan Accumulator is an even bigger deal. But perhaps most importantly, Merc players are used to only having P+S 17 so they don’t end up feeling cheated out of anything. Just get used to playing without the Ragman since he has Animosity: Morrowan.

Black Ivan is Khador’s character Destroyer. Since his affinity with Harkevich gives him boosted ranged attack rolls, you’re pretty much always going to want to bring this warjack along with the Iron Wolf. But I think this guy has a lot of potential with other Khadoran warcasters. To start, Ivan gets boosted stats with an extra point in RAT and two extra points of defense. With def 12, Ivan’s in a place where anything with Mat 6 or lower can’t really guarantee a hit. Ivan replaces his standard issue Executioner’s Axe with a brutal looking “Bear Claw”. This will give you a little extra utility since it has the open fist ability, and with Critical Brutal Damage this weapon can put a little extra hurt on. Especially if you needed to boost anyway. But it does lose a point of strength, and the critical amputation ability. Ivan has also borrowed the Bulldoze rule that Khador players should be familiar with from the Devastator type warjacks. So in a pinch he may be able to move some key pieces out of control zones or clear up charge lanes.

The coolest thing about Ivan may be his dodge ability. With def 12 he will put your opponent in a really tough place. Even with something like a Mat 7 Ironclad or Slayer, the knowledge that a single missed attack will allow Ivan to take itself out of melee range will make your opponent seriously consider how to spend their focus. They will have to choose to buy more attacks for higher damage output and hope they connect, or spend the focus to boost so you know you hit with everything. With Black Ivan, the cost of failure is high. Now think about what a pain he’ll be in a Strakhov or Irusk list where you can cast Superiority on him.

Blood of Martyrs is the latest addition to the Protectorate’s holy arsenal. Based off the Crusader chassis, this warjack wields twin blades and boasts an enhanced spd of 5. Since he’s Thyra’s pet warjack, BoM gets the sidestep ability when he’s in her control area. The extra 2″ advance you get from sidestep is just phenomenal. Dervish light warjacks already possessed this ability, and that has led me to take them in a lot of my Protectorate lists. That little bit of extra speed always catches your opponent off guard and is useful in so many situations. It can mean the difference between 1 and 5 dead infantry, or let you walk up to a Warcaster that thought they were safe behind a warjack or line of troops. With Thyra’s Pursuit spell and her feat Shadows of Urcaen, Blood of Martyrs has some pretty incredible movement tricks and can put himself in some really unexpected positions.

He also gets the Hand of Vengeance ability giving him a +2 to attack and damage rolls if a friendly faction models is destroyed within 5″ of him. When you add this to the same bonus from Choir, you get a model with a ridiculously high Mat 10 and P+S 20. And with the Parry ability your opponents won’t be able to pin this guy down. It also means you can even trample over something like Dawnguard Sentinels and not have to worry about the warjack coming out damaged on the other side. Parry also makes Blood of Martyrs an interesting choice with Reznik and the Testament of Menoth, since both have interesting out of activation movement abilities to give their warjacks. Erebus is the last ‘jack on our list. I already touched on it somewhat in my Scaverous tactics article so some of what follows may sound familiar to you. Erebus has the same weapons as a standard Slayer though unfortunately it loses its tusks. In exchange it gains an extra point of Def and Arm, and the Overtake and Poltergeist abilities. Its affinity with Scaverous allows it to gather souls for the Lord Exhumator, which for me means Erebus is going to make it into every foreseeable list with him. At only 8 points Erebus is the cheapest of the new character warjacks. Its extra defensive stats give it a resilience Cryx is longing for.

The addition of the poltergeist abitility helps its survivability even more. Just like with Black Ivan and Dodge, Poltergeist really punishes your opponents for missing Erebus. Since the helljack comes with a natural def of 14 your opponent will be wanting to boost every attack roll. This means they’ll have less focus or fury for more attacks, meaning they’ll end up causing a lot less damage to this Helljack. Try him with other Cryx casters as a useful objective holder. Position him in a place where he can use poltergeist to push enemy pieces out of range to contest or claim zones.

~ Overall I really like this latest round of warjacks. I think Privateer has done a good job of putting them at the right power level: no new faction auto-includes but all good enough to serve a useful niche. Since they’ve been out for awhile now I’m sure a lot of people have been using them. Anyone got any cool tales from the battlefield?

Author: Ben Williams
Ben Willimans is a Professional Painter and Columnist at Bell of Lost Souls. He has been involved in the hobby and art side of miniatures and the tabletop gaming industry for over 20 years. He has won multiple national painting awards.
Advertisement
Tactics Warmachine-Hordes
Advertisement