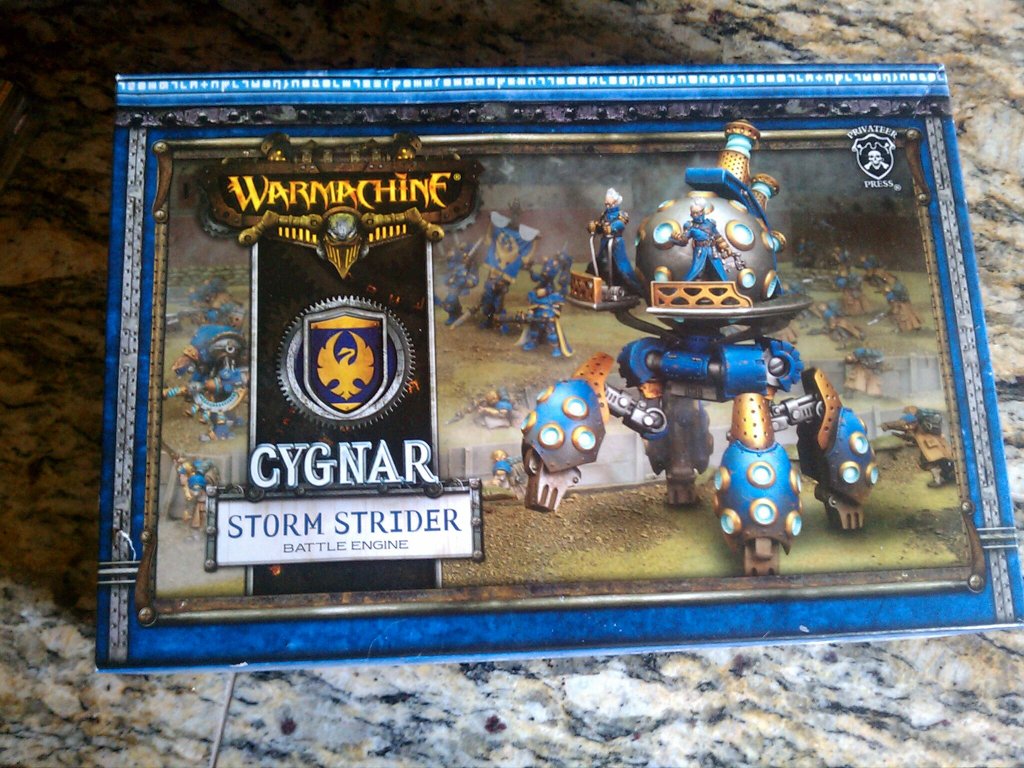 Privateer Press was kind enough to send over a Storm Strider model for review, so today we’ll be taking a look at what comes in the box and the preparation process.

The Storm Strider is, like the Arcantrik Force Generator, actually three models instead of one: a Stormsmith pilot, a Stormcaller, and the Storm Strider itself.  The pilot attaches to a small platform that glues easily to the main platform, while the Stormcaller has a small plug in its foot that doesn’t seem to have an apparent attachment area.  Since I’ll be painting the pilot and ‘caller separately, I’ve put a pin in the bottom of the small pilot platform and I cut the plug off the bottom of the ‘caller and put a pin in its place.  This way, when it’s time to glue the finished models onto the main platform, it’ll be quick and easy.

The Strider itself took about two hours of preparation time.  There are seven resin pieces: the four feet, the “hip”, the back spine, and the “disco ball”.  They all required knife scraping for minor mold lines, but five of them, the four feet and the hip, required green stuff work to smooth out inconsistencies due to mold lines creating separate layers that were around about half a millimeter in difference.  These all cleaned up fine, as none of the correction work happened in a hugely inconvenient place, but it was a lot more prep time than I was expecting for a model with so few parts.  The metal legs also had some layering at the mold line that required scraping as well.  One of them had a crack running down it due to a casting error, but two minutes with green stuff and it was filled and smoothed out.  Again, it wasn’t complicated work, but it was unfortunate that it had to be done.  Overall, the model prep felt like working with a Forge World piece.  I’ve done several in the past, including an Eldar Revenant Titan and a Nightwing Fighter, and while I didn’t have to fix a casting error inside a vent (not fun…), what was in the box wasn’t perfect, and did require a healthy chunk of time and effort.

I decided, due to the size of the model and its components, that it would be wiser to paint it in pieces and to glue it together at the end.  I’ve been on a big airbrush kick lately, and the Storm Strider seemed like a great place to continue that.  The feet, hip joints, and spine were all given the blue treatment.  By using an airbrush and creating a gradient with a P3 Exile Blue base coat and then three highlights of P3 Cygnar Blue Base, P3 Cygnar Blue Highlight, and a mix of Cygnar Blue Highlight and touch of P3 Arcane Blue I was really happy with the results, particularly for someone who’s still an airbrush novice.

The next part of the painting process was to pick out parts in Citadel Boltgun Metal and give them a wash with Citadel Badab Black.  I followed this up by picking out the “glowy” parts in Arcane Blue, then giving them localized washes around the outside of the “portals” a few times working my way down to P3 Meredius Blue.  I gave it one last wash with very watered down Arcane Blue to make the most inside parts of those portals the brightest color.  The last bit of work consisted of picking out the golds with Citadel Dwarf Bronze, washing with Citadel Devlan Mud, reclaiming with Dwarf Bronze where necessary, then highlighting with Citadel Shining Gold.

Before I glued the model together, I wanted to get the basing work done; the less I have to mess around with things once the model is built, the less likely I’ll be to slip and set myself back by smacking the enormous thing into my worktable.  Once the basing was done, I glued the bottom part (the hip, legs, and feet) together and pinned it to the base, then I pinned and glued the platform to the hip for extra stability.  That only left the Stormsmiths, which painted up fast and easy. 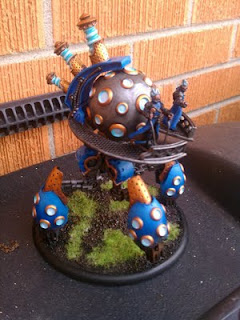 Overall, I’m pretty happy with the kit.  Again, it required a bit of extra love during the prep phase, but I think it came out great.  It also allowed me to maintain my current airbrush fetish thanks to its large surfaces, and for that I’m a grateful and happy painter.
All it needs next is a test run.  I decided to take the easiest route I could and just added it to the 35-point list that I’ve been working on, cranking up the total to 50 (also adding Strangeways and Aiyanna and Holt):
Commander Coleman Stryker (*6pts)

Storm Strider (9pts)
– 50 Points
There’s a lot to love about the Storm Strider with Stryker.  He has four spells that can all be a great benefit to the Strider (Snipe, Earthquake, Blur, Arcane Shield) and his feat ain’t bad with it either.  Stormblades get some nice synergy with the Superconduction rule, and I can even shoot at them with the Strider to bounce lightning arcs to enemy models with no harm to the Stormblades due to their immunity to the damage type.  Strangeways is on-hand for repair and helping out Stryker’s warjacks, and Aiyanna and Holt bring their toolbox to the table, allowing me to increase damage against a single model/unit or to make the Strider (or any other model/unit) attack with the magical weapon advantage. Overall, I was happy with its performance.  In my test games, it inflicted a heavy toll on enemy infantry, killing off most of Cylena and Co. thanks to Stryker’s Earthquake while doing plenty of damage up close and personal when things closed in tight. I’ve found that coaxing your opponent into making free strikes against it can be a pretty fun way to increase your own accuracy or damage potential as well.  Since the Storm Strider doesn’t have systems like a warjack, it can take a few hits before it needs to start worrying about its survival.

Author: relasine
Relasine is a veteran tabletop wargamer with over 10 years of experience. His specialty is Privateer Press' Warmachine & Hordes gamesystem. He began writing for BoLS in 2010.
Advertisement
Cygnar Painting Warmachine-Hordes
Advertisement 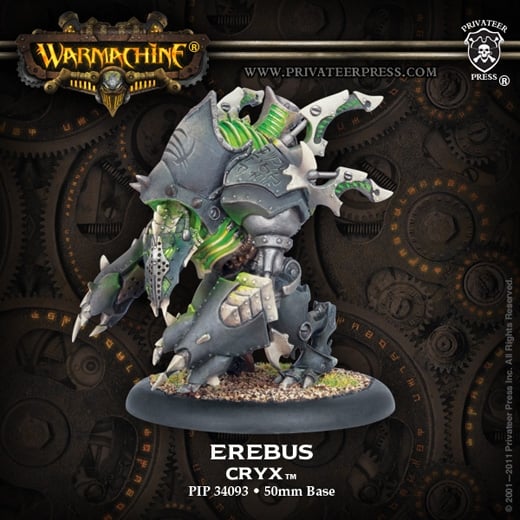