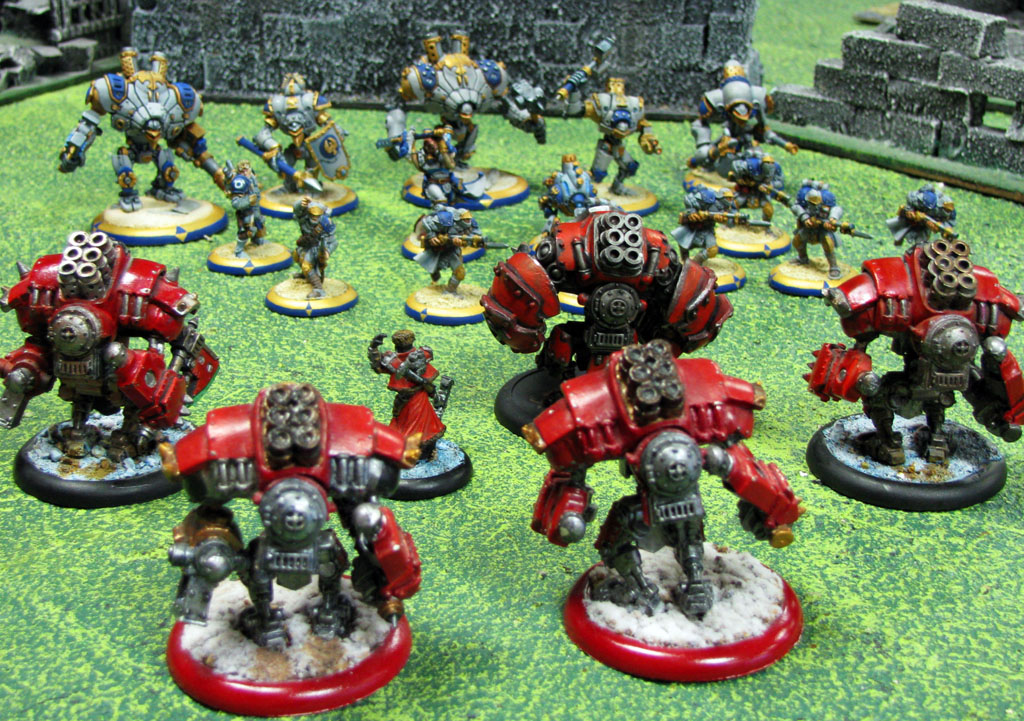 I’m here today to discuss another standard concept in the Warmachine community, how people rate a heavy Warjacks’ damage potential.

Rating units, Warjacks and Warbeasts in this particular case, is nothing new. I don’t think you’ll find any competitive arena where participants won’t spend endless hours comparing and evaluating different options to fulfill a role.

The Juggernaut Baseline
In Warmachine and Hordes, one of the most basic and earliest comparisons was evaluating a models or units’ melee damage output versus a Khadoran Juggernaut. Somehow, taking out the Khadoran Juggernaut in one turn of combat became the standard baseline. With DEF 10, ARM 20, and 34 damage boxes, it (along with the other Khadoran heavies) was the toughest kid on the block. This baseline was established before the Devastator or even the Arcane Shielded Centurians hit the scene, and even after those models were released, even though we’ve gone through a complete edition change that included substantial improvements to Warjack survivability, the baseline has stuck. Even today, you’ll often hear players rating a model based upon whether it can scrap a Juggernaut in one round of combat on average dice.

What does it take to do that?  Let’s do the math!
An unbuffed Juggernaut is SPD 4, DEF 10, ARM 20, and has 34 damage boxes. Most opposing Warjacks will have a higher base SPD, a MAT of 6 or 7, and a melee Weapon in the area of P+S 18 range. Lets assume the opposing Warjack, an Ironclad in this case, starts out with 3 Focus allocated to it, and gets the charge.

The Ironclads’ MAT is 7, so unless it rolls snake-eyes, it will hit on every single attack. As the odds of rolling snake-eyes are pretty low, we’ll assume it connects with every swing.

-1 Focus is spent to charge.

1st hammer attack- a boosted P+S 18 vs. ARM 20 should yield an average of 8 or 9 damage. We’ll be generous and say 9. The P+S 14 open fist attack should add another damage point on average.

-2nd Focus buys a hammer attack. Again, it connects, and should do 5 more points of damage.

In the first edition of the game, a Warjack only needed to lose 3 systems to be disabled and taken out of the game. So with a little luck on location, those 20 points of damage might be enough to do the Juggernaut in. In Mk2 you need to kill the entire model, so that Juggernaut is hurt, but still standing, and ready to punch you right back.


Salvaging the False Premise
So what does this example demonstrate? The basic baseline premise is flawed. The fact is, most Warjacks are unable to scrap a Juggernaut in one turn without help in the form buffs to increase damage output, or another model around to tag-team. Even a Juggernaut cannot kill another Juggernaut in one go, averaging just around 24 boxes. Even Warbeasts, which often have more base attacks, and the ability to use 4 Fury instead of just 3 Focus (for buying an extra attack) have problems.

So what does this mean for the good ‘ole baseline, and why do people still use it? I said the premise is flawed, but that doesn’t mean it’s not useful. Most of the utility is at the tactical and synergistic level.

Knowing how much total damage a model can dish out is useful. One of the nice things about Warmachine is that as a 2d6 system, you can actually rely on the odds for most games. There will always be those times when the dice show up with 6’s, or you can’t roll above a 2 to save your life (I hate those times), but if you know your potential on average rolls, you’ll have a decent shot of winning most games.

Knowing that Relasine’s Ironclad will do an average of 20 points of damage to a Juggernaut in a single round of combat helps him figure out what else he’ll need to do if he wants to kill it in one turn. He is able to look at the rest of his list and ask himself, ‘what have I got that can do 14 points of damage to an ARM 20 model?’. If I’m the Khador player, it helps me to know that I can throw my Juggernaut forward and force him to commit multiple models in order to deal with it.

A Gatorman Wrastler is not strong enough to take out a Juggernaut in one turn. But it does have two open fists, and when added to a list with Barnabus as the Warlock, the Wrastler can use it’s open fists to pick up the Jug and double-handed throw the Warjack into a swamp made by Barnabus’ spells, resulting in the ‘jack being knocked down in a shallow water template, it’s boiler going out, and shutting down for at least one full round if your opponent sends the Warcaster over to reactivate the ‘Jack.

So think about these ideas the next time you’re evaluating a melee model, especially a new Warjack.  Its not just about the damage anymore.

Do you or your friends evaluate models this way?  How does it affect your planning?