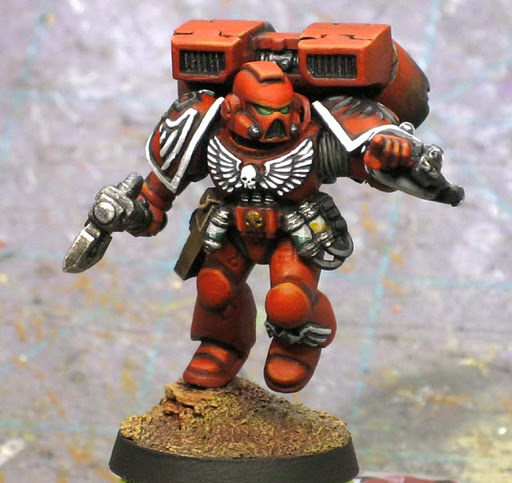 Mercer from I.D here, how goes it?. I am very keen to start a new Marine army.   Lets look at my foray into the IXth Legion.

Really, I want a CSM army, but their codex is dire and no one knows when their new codex is out. Sure, there is loads of rumours about, but there was rumours for Necrons September last year! So, I’ve always liked a Blood Angel jumper list. Kris, who I used to play, used to run one (which I helped write). It would be very different from all my mech armies (this one is pure infantry) and as a bonus, will keep the fluff police and spam haters at bay.

Oh, before I forget. Credit to whoever made the cool kit bash Sanguinary Priest model. I found it on Google images.

Building the List
Starting with the list I am going to take four squads of ten Assault Marines. Two meltaguns in two units and two flamers in the other two. I will add a power fist into the melta squad and a lightning claw or power weapon into the flamer squads. That’s the core of the troops sorted.

As I’ve taken Honour Guard, I need HQ choice. Librarians are the way forward, plus they can keep my Marines alive with shield. Of course, they will have unleash rage as well. I’ll take two of these fellas to get maximum shield coverage.

Lastly, I need some long range fire power. Triple units of five Devastators all with missile launchers should do me fine. Truth be told I would like some lascannons, but at 25 points a pop I don’t think so!

Quickly totting up I have some points spare. I will take a Scout unit with sniper rifles and camo cloaks. I find these will do nicely for holding a objective my side of the board while the Assault Marines bound forward. With the last 15 points I will take melta bombs on the Honour Guard, this will give them some punch in assault against tanks. If I had the points I would take a power fist :(.

List Tactics
Tactics for this then. The devs deploy in the centre among any cover, this will let them cover the entire board and give supporting fire to the Angels as they advance. If they can stun lock vehicles that would be groovy.

Assault Marines deploy with the melta units at the front and the Honour Guard behind them, Honour Guard are behind so they get cover and maybe block LOS to them as they are a small unit and no doubt will be a target priority.

Units with the flamers deploy behind, attached to each unit will be a Librarian and a Priest. The Librarian’s shield will cover the melta units and the front without any problems. With the Librarians and Priests attached to each flamer unit, this means my units purely dedicated for anti infantry will also have furious charge and re-roll to hit for assault 🙂

The Scouts will stay in reserve in all games. They will come on outflanking and grab a objective or stay in traditional reserve to stop giving away a easy kill point. I have given them camo cloaks so they can camp on a objective and if they do get shot to pieces, they go to ground for a nifty 2+ cover save.

I am really digging this army and gave it some test runs over Christmas. I am tempted to sell my Orks in exchange for these (not feeling the love for my Orks anymore, not played with them for ages), and the Assault Marines still give me a large infantry unit. After all, 69 Marines with feel no pain isn’t easy to kill off.

I played this list against Tau recently, unfortunately for them it didn’t end well. I think a list this style, which can close the gap on Tau quickly and make those funky railguns almost redundant, is Tau’s paper to rock. It’s also where the name of the list comes from – Poddy (a fella I played) said my Angels are like red fleas jumping across the board at him 😉 lol.

What’s your thoughts on this list? Not the usual DoA list (no deep striking!) and fits nicely fluff wise as well.