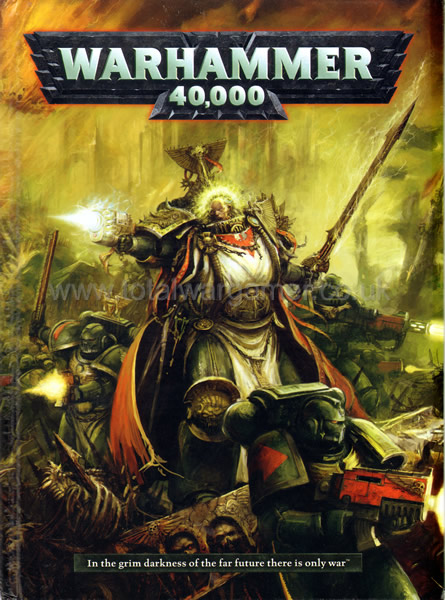 Mercer here from Imperius Dominatus. I managed to get my first game in with 6th edition last week. Here’s my initial thoughts.

While it took us quite a bit to hack through a 1k game (this was because we was gassing a lot, lol), it was really enjoyable. The game was my Necrons vs Alex’s Daemons. I haven’t done a battle report as I was too concerned getting the rules sorted than reporting. Here’s our lists:

A quick overview on how these army lists are effected by the changes in 6th edition. The Necron Overlord’s Catacomb Command Barge is now a Chariot. Chariots get the sweeping attack rule by default now, also Chariot’s can assault! Basically the vehicle just smashes into a unit (causing D6 S6 hammer of wrath attacks) and then the rider is classed as in assault. The Chariot also gives +1 armour save to the Necron Overlord (so 2+ armour save), so expect to see less sempiternal weave upgrade and more of phase shifter. In addition the Chariot also gives fearless to the rider.

On to the other vehicles (Ghost Ark and Annihilation Barge) and Necron Warriors. Firstly the latter, Necron Warriors. Thanks to rapid fire changes, these guys can move and still fire 24″ or rapid fire – excellent for those in Ghost Arks whom a Cryptek has joined. I do hear you cry about a Phaeron (gives relentless to a unit), well relentless allows you to asault after firing rapid fire weapons, among other things.

Vehicle wise, all vehicles can move 6″ and fire one weapon and all others at snap fire or move 12″ and snap fire only. They can also move a extra 6″ in the shooting phase, for a total movement of 18″. This makes the game more tactical, as you can move a vehicle after a squad has fired and use it to block LOS to a unit or give them some form of cover.

Lastly onto the Wraiths. Jump infantry has slightly been tweaked, you can only use jump packs ONCE per your turn. You either use the jump pack to move 12″ and then 2D6″ assault, or you move as normal infantry and use the jump pack to re-roll assault distance AND get the hammer of wrath special rule. In case you don’t know, hammer of wrath is one AUTO HIT per model using the model’s base strength with NO AP value – so no rending for Wraiths 🙁 .

I don’t know a huge amount about Daemons, really just enough to get me by. So how the rules changes effect Daemons will more be a quick overview.

Fateweaver and the Daemon Prince both have wings, which means they are flying monstrous creatures. FMC (Flying Monstrous Creature) has two modes of flying; glide and swoop.

Swoop is a total new ball game. Swoop is pretty much like fliers, though at the start of each turn the player must declare whether gliding or swooping. When swooping a FMC must move at least 12″ and up to 24″, and can make a single 90 degree pivot move. In addition a FMC cannot charge or be charged while swooping and any unit which fires at them fires via snap fire, unless got the skyfire special rule.

Here is where monstrous creatures get cool, they can do a special attack called vector strike, which is like the Overlord’s sweep attack. The FMC gets D3 +1 attacks against a unit is has flown over using unmodified strength and AP3. This can happen on a flier and vehicles are hit on the side armour.

A FMC also has the dive rule, this rule only is used if the FMC is swooping. Basically it gets the jink rule and may only snap fire until the end of its next turn.

However, if a FMC is hit, then take a grounded test, on a 3+ the FMC stays flying, but fail that and it crashes to the ground and suffers a S9 hit with no armour or cover saves! Yikes!

Oh, monstrous creatures also have the fear, hammer of wrath, move through cover, relentless and smash rules. Wow, what a list!

The only other changes are to Daemonettes and Fiends. Daemonettes cannot assault after running, as fleet no longer allows them to do that, however they can re-roll assault distances. Fiends are cavalry, and they treat all difficult terrain as dangerous (nasty), but are not slowed by it, they also have the fleet special rule and hammer of wrath. OK, this is the juicy part…

Movement in 40k is a whole lot more tactical now. You can’t have a I.C or special weapon model at the front no more, if so it means they are going to probably get fragged. You have to think on the positioning of your models now. Speaking of position, this also is factored in when shooting, as you can only hit the models you’re firing at! E.G:

10 x Fiends are hiding behind a large tower ruin in the centre of the board. Several of my Necron units move up the right flank and can draw LOS on the unit, but can only see four of the Fiends. When the unit is shot at, wounds can only be allocated to these four models only, starting from the closest model. Saves are made until the closest model is either dead or all wounds are saved.

With movement and shooting being more tactical, this means infantry get a look in. No good parking a tank and blasting away. It also enables infantry to survive better.

Close combat wise it was pretty much the same. Only major difference was 3″ pile in using initiative order, so I5 models pile in 3″, then I4 models etc etc. The other major difference is assault range is 2D6″, I had one bad roll for assault (snake eyes) but most times I was getting good rolls.

Monstrous creatures are very cool. They are more survivable if they can fly, and they also have a bucket of special rules. Very cool stuff!

Vehicles, I cannot make my mind up if they took the nerf bat, got a buff or stayed the same. Necron vehicles seemed extremely tough as they are av13, have 3-4 hull points, and vector strike from monstrous creatures couldn’t even scratch the paint work. Been table to take down a vehicle with glancing hits is cool, with hull points it does make it tough to take down a vehicle via glancing, but it’s also tough to get one to explode when scoring a penetrating hit, as 6+ is the result you need. One thing Necron vehicles do not like is AP1, which gets +2 on the damage table! Luckily my Necron vehicles took some damage and just kept coming 🙂 .

Overall I am loving 6th edition, the changes are great. The game feels balanced on first impressions and nothing is standing out as ‘OMG must do that’ kind of thing.

What are your thoughts on overall balance 2 weeks in?