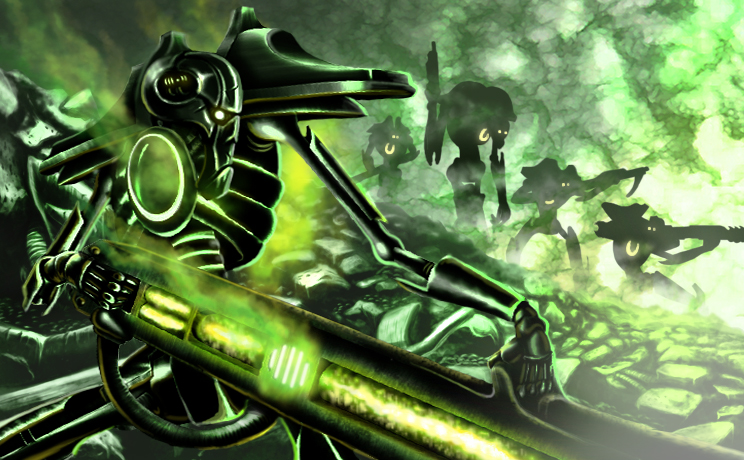 Mercer from Imperius Dominatus here. 6th Ed has shifted the codex balance, and has also changed how units work in 40k. The Necron primer is the first in a series of primer articles, which will help you work out what’s hot and what’s not.

Note that the primer will be short and sweet.  Also note that this is only a primer (basic guide), it’s purpose is to say what is good and what’s not. Tactica’s come later.

Imotekh the Stormlord
Was meh before and still meh now. Perhaps only worth while if you’re using Scarab farm lists, though I still do not see the point in this guy. Just take Royal Courts with solar pulses, the Scarabs should be in range for assault turn two and two turn’s of night fighting will save their bacon a bit.

Nemesor Zahndrekh
Adaptive and counter tactics are pretty useful, though 185 points is a lot to give your own units a few special rules. Can’t say Nemesor has anything else going for him, apart from the reserve bonus rule he has.

Vargard Obyron
Probably is the best named Necron character in the codex. 2+ armour save means Obyron is pretty tough in combat, add cleaving counterblow and he’s going to chop stuff into tiny little bits. If you want killy and mobile, then Obyron is your guy.

Illuminor Szeras
Expensive Cryptek character. Avoid, unless you want a cool model. I just really cannot see what Szeras brings to the table. Any thoughts from peeps who have used Szeras?

Orikan the Diviner
A Necron Warrior with two wounds, a heavy weapon and a phase shifter. Can transform into a stronger and tougher version, though his points cost is too much for something which randomly starts and randomly ends. Can help with re-rolls, but only limited use.

Anrakyr the Traveller
Not a too bad choice for killy combat purposes (Obyron is still better). At least can take a Royal Court and has a warscythe, so CCB sweeping goodness. I am not sure if his mind in the machine ability works out of vehicles (cannot find in rulebook) and 5th ed FAQ no longer applies.

Trazyn the Infinite
Meh, moving on. The only real use I can see for Trazyn is holding objectives, but he’s expensive just to use for that ability.

Necron Overlord
Probably the best HQ in the codex. Only need to take if on a CCB. Phaeron isn’t probably needed, as rapid fire rules don’t allow you to assault after shooting; you don’t want Necrons in combat, unless they are dedicated assault ‘Crons.

Destroyer Lord
Good beat stick unit, but a shame he cannot have a Royal Court, and really only adds what other Necron close combat units can do. Maybe escort with Scarabs and then split to attack weak infantry units. Preferred enemy did also get slightly nerfed, but on the plus side it is conferred to the unit. Preferred enemy Canoptek Wraiths anyone? 🙂

Royal Court
Necron Lord is ok if you like paying big points for a single wound robot. Can support units, but I personally think is too costly once wargear is added.

Cryptek’s are much better and offer significant options; Despairtek with Deathmarks still works and can also teleport better thanks to new deep strike mishap table; Lanceteks rip hull points off vehicles and make it dark; Stormtek is ace with haywire and that’s about it; Transtek keeps your Necrons out of assault with the crucible.

Deathmarks
Went from meh to awesome. Rapid fire sniper guns, which means these guys can double tap at 12″ or long range fire 24″. Add that they have the sniper rule, so they have precision shot (excellent for taking out characters) and will always wound on a 4+, is also pinning and has the rending special rule. Add that they can deep strike after a enemy unit has arrived from reserves (this means a enemy unit just coming onto the board), means they come on in the opponent’s turn (you get more movement from them). They can also target a unit as prey and wound on a 2+.

These guys are wicked sick, excellent distraction units, and not too expensive. Probably one of the best elite units in the Necron codex.

Lychguard
A bit meh, even with the awesome warscythes. They only have 3+ armour to keep them alive, and with the hyperphase sword they are only AP3 and get a 4+ inv (can bounce shots back on a 6+). Too expensive really for what they do.

Triarch Praetorians
Little better, as the rod of convenant is a classed as a power axe (though looks like a staff to me), which has the unwieldly rule and is +1 strength and AP2. Jump infantry rules make them slightly better, but they lost the little power they did have.

C’Tan Shard
Over priced monstrous creature. Does have some cool powers, but soon becomes even more expensive. Anyone who has used one of these in 6th care to give their thoughts?

Flayed One Pack
Perhaps even more rubbish as units as they cannot assault if they infiltrate or outflank. So the only option is to run across the battlefield doing moon walk impressions.

Triarch Stalker
Better at moving through terrain as it can ignore dangerous terrain, that’s about how much better the Stalker got in 6th. Still works nicely in concert with Warriors and Ghost Ark’s, The more to hit means more to glance and wreck. Not a bad unit, but nowhere near the best and definitely not the worst.

Necron Warriors
Cheap troops. Got better with anti tank, back like they was in 4th – awesome!

Necron Immortals
Troops with 3+ armour save. Gauss is better on these guys.

Ghost Ark
Makes Warriors more survivable. Excellent piece of kit. Add that it gets a 5+ cover (if it moves) as it’s a skimmer and gets the jink special rule.

Night Scythe
The Foundation for a true flyer build. Not exactly mega tough, but is more survivable as enemy units need a 6+ to hit (if zooming), is also not open topped like most things in the Necron codex. Now is even better with the invasion beams.

Canoptek Wraiths
Awesome. Like every other multi wound model in 40k, Wraiths become more survivable. They benefit well from hammer of wrath as they’re S6 base. Whip coils also work better; no I3 G.K nemesis halberds! 🙂 .

Tomb Blades
Just does anti infantry like any other Necron unit. Maybe add gauss blasters and use them as cheaper Destroyers. Shield vanes are expensive, but probably the best upgrade, it’s not like you’re going to be flat out all the time to benefit from stealth in the best way.

Destroyers
Still meh and too expensive; re-rolling 1’s to hit and to wound isn’t that awesome sauce. They can do anti infantry like any other Necron unit and have gauss for anti tank, like most Necron units. Necrons just have better fast attack choices over Destroyers

Doomsday Ark
Gone up in the world, as blast templates only need to touch vehicles; this bad boy is AP1, so is going to break stuff. Add in that outflanking units cannot assault when they arrive, so the Doomsday is safe not too far from the board edge. It’s a lot more viable choice than before, but Annihilation Barges out shine them. Don’t forget it has the jink rule, so 5+ cover save if it moves.

Annihilation Barge
Was awesome and is still awesome. Who needs a.a when you’ve tesla! Second bonus is that AP- is no longer bothered by the vehicle damage, and the Annihilation Barge loves to glance armour. Don’t forget jink also 😉 .

Necron Monolith
Still gets nuked by melta, so no change, really. Particle whip is slightly better thanks to the blast template rules against vehicles. Don’t forget jink 😉

Doom Scythe
Second half of the Necron-Scythe build, the first true all flyer list. Blows stuff up really fast, and now more survivable.

Canoptek Spyder
Only major change for monstrous creature’s is fear, which is handy for the Spyder as it’s only WS3. Can get cover saves easier – hide it behind infantry!. Can also repair hull points. Still a pretty cheap monstrous creature.

That’s the Necron primer, folks. What do you think is hot and what’s not now we’re using 6th ed?