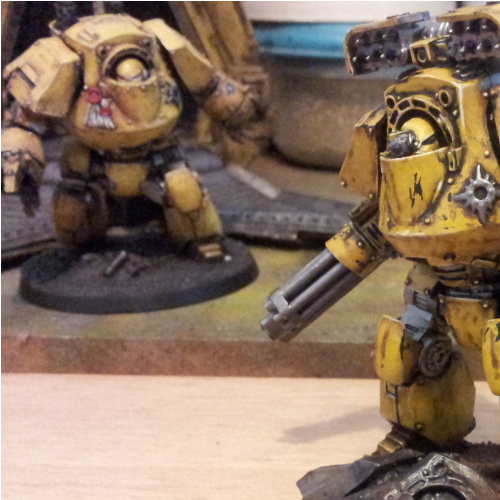 This week, Best of BoLS is back to look at Shaw’s awesome Pre Heresy Imperial Fists.

Doc; Best of BoLS is back with another army showcase. In todays edition, we will be looking at Shaw3029’s pre Heresy Imperial Fists. Pre Heresy armies are an ultimate goal for a lot of marine modellers and attention to detail is always important. I’m sure that with the FW books set to cover the heresy, we’ll see a lot more out there soon, which may or may not be a good thing.

Shades; Having had my Space Marines for over 14 years, I always enjoy seeing someone take a fresh perspective on the oh so familiar theme: Doubly so when it’s for a Chapter/Legion who often get  comparatively little attention. The Imperial Fists we are focusing on today are very much a Work In Progress, but we hope that, like us, you can see where this force is headed and how exciting that finished project is going to be! So on to the meat of this feast; let’s find out about Shaw3029’s take on the mighty VII Legion. Doc; What inspired you to start this project?

I first started the army many years ago after reading the first few of Black Library’s Horus Heresy books. I loved the idea of creating a pre Heresy army and have always liked the background of the Imperial Fists. Shades; What was the hardest part in terms of modelling and painting?

When I started the project the only armour kit available from Forge World was the Red Scorpion upgrade pack. So with my early marines I actually created most of the armour marks from scratch. Finecast also didn’t exist so I broke a lot of knife blades, hacksaws, drill bits and at least one set of clippers creating some of the models.

Removing all those Imperial Eagle was also a real pain. Doc; Anything you learned while making these?

As I started the army so long ago the whole project has been a learning process really. I learnt how to paint yellow and use a airbrush. My modelling skills have also greatly improved. Shades; Favourite Piece in the army?

Its very hard to choose a favorite piece as every model has been converted in some way. I love my Assault Cannon dreadnought but I think it would have to be the Primarch Honour Guard Squad especially once I paint them. In particular the Legion Champion with the Thunder Hammer he is the model I most proud of. Doc; Future Plans? Either this army or a new project?

Get it finished! Most of the modelling is now done apart from a couple of Rhinos so I want to get it all painted up! The only units that are “finished” are the Contemptors and one of the two tactical squads. Although I have some weathering, extra details and few decals to add. I am aiming to have the army complete with a siege themed display board for next years Armies on Parade competition.

I have a Ork army that I also need to finish. I have just started working on it again as I want to enter it into this year’s armies on parade. I also have a Flames of War SS Panzer Grenadier army as well as a Orc Blood Bowl team and a Delaque Necromunda gang.

Once Forge World release the Horus Heresy books I almost certainly going to do a second pre heresy army. I am toying with the idea of two Land Raider Spartans filled with marines escorted by four Predators. I just need to decide the legion I am thinking either Emperor’s Children or Alpha Legion or maybe Lunar Wolves if I can get a decent looking colour scheme. Either way I want to do one of the legions that fall to chaos but having said that Blood Angels or bright green Salamanders tempt me as well. Too much to choose from! Doc; There are big sections of the thread where you have pictures of lots of converted, unpainted models. Did you have a building/painting strategy in mind when working on this project, or was it more of an organic build-&-paint as ideas came to mind?

Originally I planned to paint things up as I went along but as I got involved in a couple of campaign weekends the army quickly grew to more than 3000pts. I slapped the base coat on and played with that for a while which was never really the plan as I like to play with fully painted models.

Shades; The thread is peppered with examples of models you have gone back to, rebuilt with new components, repainted and often repurposed. A lot of hobbyists are loathe to destroy their creations, even if only to redo them. Are there any particular reasons why you do?

Literally one of the hardest things to do was not throw half the models in the bin when Forge World released the armour packs. When they came out I got rid of my dreadnought, ripped off all the bolt guns, heavy weapons, a few backpacks and heads and then did a massive bits order. Once I made the alterations and having got a few of the Forge World Models I think my older models fit in nicely alongside them and I’m now happy with them.

I am almost dreading the release of the Cataphract Terminators that Forge World will inevitably do.

I paint stripped a fair few models and was extremely tempted to paint strip the whole army recently when I got the airbrush. But I’ve stopped myself doing that as it would take way to long and I am happy with the look of the infantry although it takes ages! Shades; Do you have any advice for people who have models they are unhappy with?

If anyone out there has models they are unhappy with then change them as you can always create something better. I don’t think I’ve every ripped apart a model or paint stripped one and regretted the changes I made. Doc; Thanks for taking to time to answer our questions, I’m sure everyone can agree that the army looks incredible. Look forward to seeing what the future holds for them and your other projects.

Shades; Thanks again to Shaw3029 for letting us show of his models and for answering our questions. If you’ve got any comments, criticism or questions for him, leave them in the comments below. Better yet, head on over to the Hobby and Project Lounge and check out his thread (which you can skip to by clicking HERE!) While you are there, check out all the WIP pictures he has posted. I’d also strongly suggest you have a look for his SS Panzer Grenadiers in the Flames of War H&P Lounge. If you’d like to see one of your armies here on the BoLS front page, get a thread started for it, post some photos and let us see it develop and grow! We can’t make any promises, but if it catches our eye, you may just find the good Doctor and me asking YOU a few questions.

Doc; And thats all from us this time. An army like this doesn’t appear over night, but the first step to such a comprehensive army project is making that first post. So go share your stuff on the forum! Its quick easy and we’re all very friendly. Remember – We want your Dark Vengeance models to show off so get to work! Until next time…

Since writing this Shaw has won his stores Armies on Parade competition with his Evil Sunz Orks. Go check them out!