40K: Horus Heresy Betrayal is a Gold Mine! 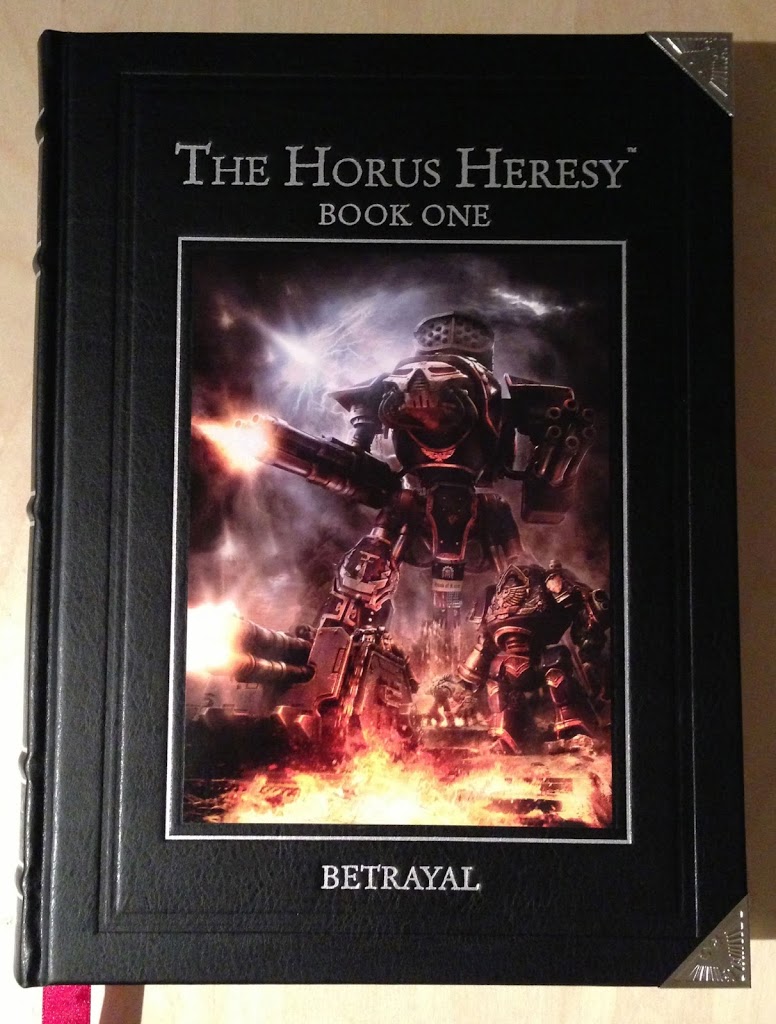 Let me just come out and say it – Horus Heresy Volume 1 is the best publication Games Workshop has put out since the Realms of Chaos hardcovers from the early 1990s.

Its hard to really put your arms around Horus Heresy Volume 1 – Betrayal; hell even the title is gargantuan.  It is not so much a single book as a portal – in a way part time machine and part rulebook that opens up a vista to an entirely new world that you’ve only read about, but now can fully enter.

It’s not so much any single part of the book that impresses but the amazing quality of every single aspect that all weaves together into something greater than its constituent parts.  From the over the top “trying to impress” physical characteristics of the layout, to the paper, to the cover to the bookmark, to the extensive background that both tells the historical tale if the Istvaan III Betrayal, to the rules themselves, to the amazing artwork, to the amazing background reveals and hundreds of subtle touches.  Lets take just some of these in turn.

I’m not going to say much about the physical features of the book except to say that its very, very hard to not be impressed.  But lets talk about the background.

The Background
What we have here is an amazing bit of authorship.  We get the background of the Great crusade, starting with primers on the Unification Wars, all kinds of stuff on the Thunder Warriors – the transition process that led from to the Astartes and the original Terran creation of the twenty Legions.

The book then takes us all the way through the Great Crusade and leaves us with a ringside seat to the Warmaster’s grand betrayal at Istvaan III.  The story of that battle is great, and syncs up perfectly with the Horus Heresy novels, and brings a lot of our favorite characters such as Loken, Ancient Rylanor (anyone up for a purple Venerable Contemptor dreadnought who bolsters his Loyalist brothers in assault), and new ones such as a loyalist Death Guard psyker who Really wont just die!

Its not just the battle history that makes the book a gem, but the lavish attention given to its four stars: the Sons of Horus, Emperor’s Children, World Eaters, and Death Guard.  In one of the books most overlooked sections, each of these legions is given a full 18-20 pages of dedicated background. You read that right, and let’s hope that this sets the pattern for future books and the attention given to all the Legions.  You get origin stories, homeworlds, culture, tactical doctrines, famous battles, lavish color plates, and so much more.  As just a tiny example of the attention to detail, we even get color plates of the Original Terran names and color schemes of the legions before they were reunited with their Primarchs!   Did you know the Death Guard were originally called the Dusk Raiders and had an entirely different color scheme and symbol?  Did you know the World Eaters were originally the  War Hounds and sported different symbols as well?  Unless you played the original Epic Scale twenty years ago, you probably didn’t – but now you do. Onto the Rules
First off the rules represent a complete stand alone “branch” of the ruleset.  You get a complete Legion allies chart, a full Legion Army List which is MASSIVE, clocking in at 37 unit entries, not counting the unique characters, primarchs, and units of the 4 included legions.  You get a new warlord table, 6 new missions, and 12 pages of solid new equipment and wargear.  In short, an entirely detailed universe that is at once more archaic and grander than what we get out of modern codices. The Primarchs have already been covered, but they are amazing indeed.

In short this book is a treasure trove for anyone at all interested in the Heresy, or just a new way of playing the game.  I can tell you right now, that you come away from the background section of each Legion in this book with a much stronger sense of history, understanding, and “texture” than most codices have given us in a long time.

Some may scoff at the price, but for me, it has way more content than any two codices put together, and I have a feeling one of the new phrases you better get used to hearing is “Warhammer 30K”  It’s not just a supplement, it really is an entirely new game.