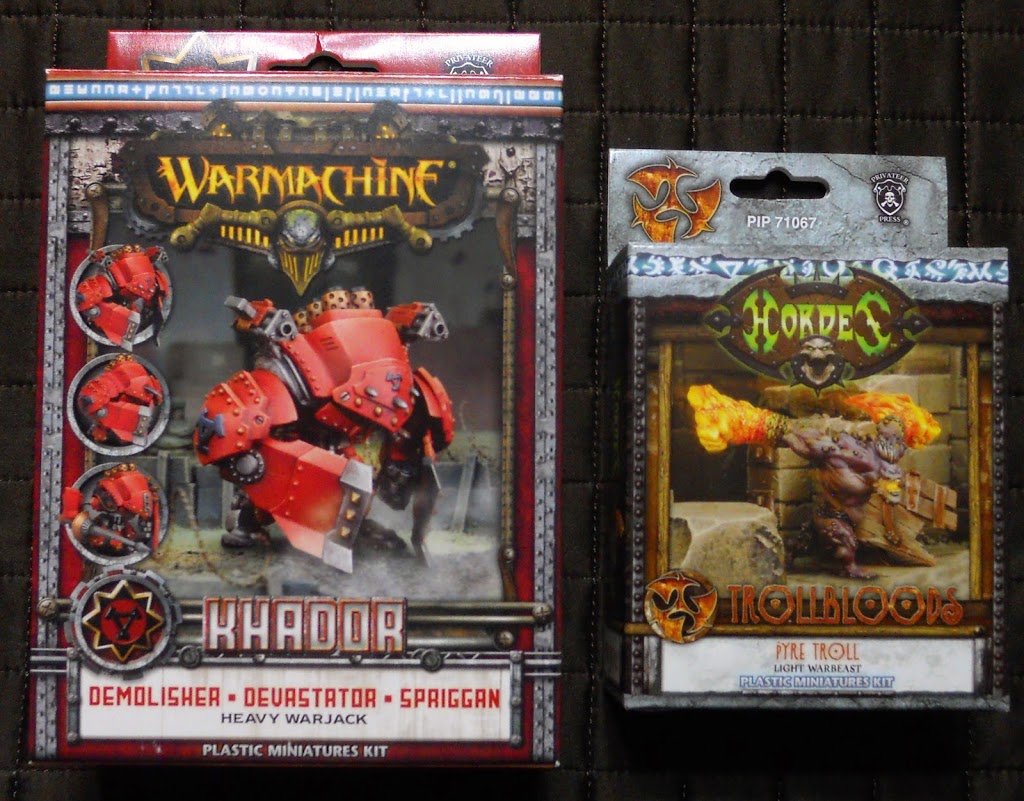 Two new plastic kits from Privateer Press hit stores this October.  Khador players get a price-reduced resculpt of two older warjacks along with the parts to build the brand new Demolisher.  Trollblood players get a resculpt of the Pyre Troll light warbeast. Since the Demolisher has been so long in coming, we’ll start with Khador. Inside the box is your usual vac-tray and sack of bits. I’ve laid out all the components for your perusal. Here is a close-up so you can check out some of the detail.  Privateer seems to be continuing to improve the sharpness of detail in these kits, as seen with the Spriggan shield and Khadoran Anvil on the shoulderpad.  On the other hand, it looks like we’re still getting those hard-to-clean mold lines in some places, like the one running down the boiler. I’ve partially assembled it so you can get a feel for how it will look when it’s finished. This new kit is actually a fair bit shorter than the Juggernaut combo released a couple of years ago.  But maybe that’s how it should be.  Having the older, less advanced design as the larger piece makes sense for Khador. Now let’s move on to Trollbloods.  For whatever reason this faction seems to be winning the race to a full line of plastic beast resculpts.  With the plastic Bouncer and Swamp Troll already having pre-released at PAX Prime, this faction is only 4 sculpts away from leaving metal warbeasts behind completely.  Although to be honest, I doubt there are any plans for a plastic Mulg any time soon. You’ll find your new beast bagged unceremoniously inside the box. With only 3 pieces, this guy may be the least complicated plastic kit I’ve seen so far. Show us your troll face! I think the chains on the arms turned out looking really good. And I also really like the highly stylized musculature. But I think the really important thing for the veteran Trollblood players going to be the size.  The old metal version was a really nice sculpt, but man was he tiny.  Well you don’t have to worry about pygmy Pyre Trolls any longer.  As you can see, the new guy absolutely dwarfs his younger brother here.

~Another month… another round of new plastic kits.  How do you guys think these resculpts turned out?