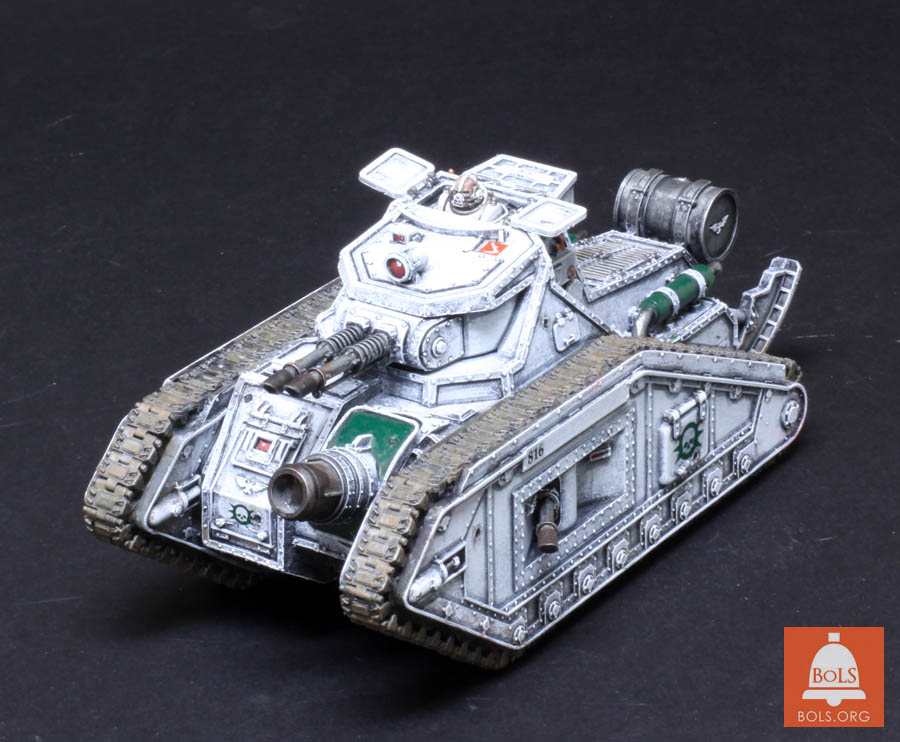 Since I’ve been immersing myself in the new Horus Heresy-Betrayal forgeworld book – I’ve been wanting something to really stand out as a centerpiece of my Death Guard collection.  Sure, Contemptor Dreadnoughts,  Fellblades, and even Thunderhawks are nice, but I wanted something cool and “antiquated”, from the Betrayal book to “age” the force. When I got a chance to take a fine toothed comb to the Lagion Malcador I knew I’d found my miniature. Now the Malcador isn’t a new miniature. It made its first appearance in the Siege of Vraks series, so I assumed the model and its rules was a simple cut and paste job to fill out the Legion army list.  I was wrong.

Here’s the special rules for the 40th Millenia’s Malcador:

Engine Damage: If the Malcador suffers an engine damage result, it loses d6″ of movement, rather than the normal d3″.

It is noted that the antiquated, unpopular tank class is unreliable, and slow due to its underpowered and finicky engine.

Here’s the rules for the Heresy Era Legion Malcador:

It is noted that the class has a tempermental yet potent engine that is used by the Legions for its extreme speed and breakthrough abilities – almost unheard of in a superheavy chassis.

Its nice to see that Forgeworld has a sense of humor! Apparently the Mechanicus has regressed.

Now just as with the Thunderhawk, I can’t resist giving my new centerpieces a little backstory and history.  Here’s my take on “Dirty 816”. Dirty 816 is a true veteran of war, not only predating the Horus Heresy, but the Death Guard themselves.  It of one of a handful of surviving heavy tanks used by the Emperor’s Thunder Warriors of the XIVth Regiment – used in the pacification of the Unspeakable King of Old Albia.  One of the oldest known examples of its class, it was turned over to the newly formed Dusk Raiders Legion after the Wars of Unification and with them it marched to war during the Great Crusade.

The vehicle is seen here in its later Death Guard livery.  The Malcador’s legion color was hastily whitewashed atop the original dark grey colors of the Dusk Raiders.  Dirty 816 has a battlefield tradition of bringing victory time after time, and the Sol-based veterans of the Death Guard quipped that she would only fail in battle when the last sands of Terran Dust fell from her hull.

Dirty 816 is equipped and used by the Legion as a mobile fortress.  She is armed with a set of lascannons providing coverage both forward and side, and a formidable Demolisher cannon is hull mounted to deal with the heaviest of threats.  She mounts one of the legion’s few Flare Shields and her usual tactic is to blaze up and enemy flank with her high-performance engine.  She will then pivot into the enemy line presenting a potent thorn in their flank that is almost immune to barrage fire, and offing a valuable distraction exploited by advancing Death Guard Infantry.

Dirty 816 was deployed to the surface of Istvaan III with the IVth Great Company; Terran all and marked for death by both their Primarch and the Warmaster.  It was said the life-eater virus and ensuing firestorm scoured her hull clean in the opening moments of betrayal.  She fought on against her traitor brothers for weeks – drawing blood in the name of the Emperor and Terra. Dirty 816 did not survive the conflict. ~Comment away folks.  I’m sure to be clanking around my Heresy Apocalypse table making “chunka-chunka-chunka” sounds as we speak.  Look for a full pictorial of my fully reorganized Legion army coming soon (its a big job)