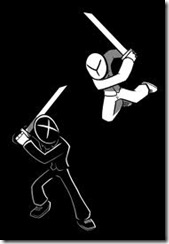 Hey all, Mercer from Imperius Dominatus here.I have been thinking a lot about CSM lately and deciding what to take in my heavy support for my Iron Warriors army – but Havocs or Oblits?

The Chaos Space Marine codex has some nice heavy support choices. Some are old favorites which have been around a long time and have imperial counter parts and others are funky new stuff. I am going to look at two particular heavy support choices; Havocs and Obliterators. Havocs are basically CSM Devastators. Nothing really special going on standard wise with the Havocs.

The weapon options is where is it at for the Havocs, here they become extremely customisable and can fit into your army and plug the gaps.

If you are doing an old fashioned Rhino rush list then these guys can fit in; take quad meltguns, plasma guns or flamers if you like.

You could take them on foot with quad plasma guns, they are not going to cost mega points and bring some nice fire power.

As I mentioned above, Havocs can plug the gap in your army and are mostly taken for ranged weapons, which you cannot get in other areas of the codex in such high numbers.

You have the choice of heavy bolter; autocannon; missile launcher & lascannon. Sorry no multi meltas or plasma cannons, but that’s how it was in the previous codex so nothing lost.

The heavy bolter is pretty meh while the lascannon is pretty expensive.

The autocannon is the middle ground and best all round option of all ranged weapons. It only costs a bagain 10 points and brings weight of fire power which will do good against infantry, monstrous creatures and vehicles up to a certain armour value.

Speaking of marks, you can add icons too. An icon of vengenance maybe of interest as it makes your Havocs fearless and stops them running away.

I think out of all the weapon choices for Havocs I would have to go with autocannons. Chaos Space Marines don’t have buckets of ranged stuff and Havocs fill that gap nicely for very little points. If you do go special weapons i.e meltagun etc you are more than likely to add the cost of a Rhino in, though mass plasmas on foot would ok.

VoTLW (Veterans of the Long War) isn’t that useful on these guys, they will be either sitting back shooting with ranged weapons or moving about slagging tanks with meltas or double tapping with plasma guns.

Obliterators are an old family favourite of mine and suit my Iron Warriors army very nicely (so do Havocs actually). I’ve always thought these big mutant big gun guys are cool.

In the new CSM codex the Obliterators have dropped down to 70 points, gained the daemon rule, bulky rule and lost fearless and dropped in leadership. They still have slow & purposeful, which due to rules changes means these guys cannot run, but that’s ok.

Wargear is a power fist and obliterator weapons, these weapons are; assault cannon, heavy flamer, lascannon, multi melta, plasma cannon, twin-linked meltagun, twin-linked flamer and twin-linked plasma gun. The assault cannon is actually a new addition in this CSM codex and you can see why; the Obliterators cannot use the same weapon for two consecutive shooting phases, so if you are mooching up the field you can fire a lascannon and then you will have to fire something different – all models must fire the same weapon by the way.

The Obliterators are more flexible than Havocs due to the amount of different weapons they have. You want to burn infantry? Check. How about slagging some Terminators? Check. Blow up tanks? Check. In the Havocs case once you have picked a weapon for them they have to stick to the role more or less.

Obliterators can also deep strike, this gives them mobility and allows them to get those meltas into range pretty quickly. Shame CSM codex has lost icons to increase deep strike accuracy, ah well. I guess you could always stick them inside a Land Raider if you really wanted, though this isn’t something I would do.

Then the Obliterators have a power fist too. They have 2 attacks each base so they will be punching some things easy peasy.

Lastly you have the chaos marks and one of these marks in particular is very useful; the mark of nurgle. See Oblits have the daemon special rule which gives them a 5+ invulnerable save, but this isn’t mega super awesome sauce and anything S8 or above along with a low AP can easily instagib an Obliterator and make mince meat out of them. Add MoN (mark of nurgle) and only S10 weapons can instatgib or anything which inflicts instant death i.e force weapon. This makes the Obliterators incredibly survivable.

Unlike Havocs, Obliterators do not get access to icons.

You can take VotLW for 3 points a model, this is handy in a Space Marine heavy meta area, you can re-roll all failed misses during the first round of combat.

Both units have some very interesting things they bring to the table; Obliterators are extremely flexible and can do shooting extremely well and combat if needed. However they are pretty expensive and when you start taking multiples of them the cost seriously adds up. They also cannot use the same weapon the following turn, depending on how you are deploying the Oblits (and where you deep strike them) this could be an issue.

Havocs are extremely cheap for what they do and have multiple weapon setups which rival the Obliterator. Unfortunately once armed the Havocs have limited roles on the table top. If you increase their unit numbers and add a Rhino then you are talking not far off Obliterator points.

I am not sure if there’s a clear winner here. Both units have nice qualities, but have some sink points as well (literally for the Oblits!). I really think it is horses for courses this one and perhaps a mix of each unit in an army is a better choice to go for. Obliterators definitely win the coolest models between though two though ;).

What do you prefer, Obliterators or Havocs?