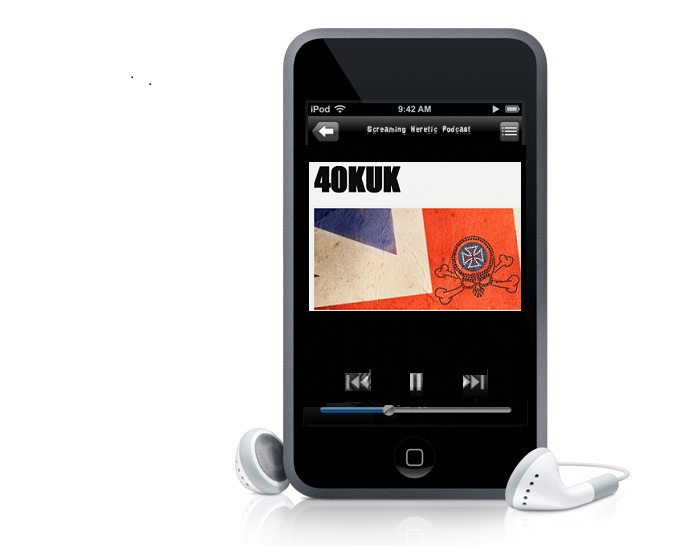 Welcome to another “This Week in 40K Podcasting,”
So, I owe the Overlords one as I missed their show last week, so here is this week’s top 6!
40K UK – Episode 58 ***Explicit***
Highlights:  This week the gang took a good close look at Codex Dark Angels!  Rob opened up the show with an interview with Neil Kerr.  They discussed the Swedish ETC team, competitive Power Armor builds for lists, and his Marine/Eldar bike list.  Next, Dave talked to Matt Robertson and they discussed the development of the Welsh ETC team.  Next, the guys got together to take a first look at the Dark Angels Codex.  They start off by detailing their overall thoughts on the Codex and its power level.  Next, they covered the Special Rules of the army like Grim Resolve and the Warlord traits such as Rapid Maneuver.  Next, the boys covered the generic HQ choices like the Company Master and the Librarian.  Then then move on to look at the Troop Choices and some of the differences in the point costs and abilities from stock Marines and Scouts.  Next, the guys moved on to the Elites, which included Veterans, Deathwing and the new Deathwing Assault rule, Dreadnaughts and much more!  They close out the show with a brief look at the Special Characters found in this Codex, including Azrael, Ezekiel, Belial and more!
Opinion:  This was probably the best overall review of the Dark Angels I had heard this week, and as such was easily my favorite podcast this week.  It was also a nice added bonus to hear from Neil Kerr and Matt Robertson, as their respective ETC teams will be something to watch this year.  This was a great showing this week guys, and all in a manageable time frame.

Highlights:  The boys are back after over a month off, and they open up the show with what they have been doing in their long absence, which included a pretty good rant section.  Then, in the ‘News and Rumors’, the boys talked about a new Kickstarter, the latest from the Black Library, and the Dark Angels release!  Next, Reese from Frontline Gaming joins the cast for the Rapid Fire segment, where they answer questions live from their forum fans.  After that was ‘Tactica’ segment of the show, and this week the guys talked about a recent tournament where Kyle and Rik teamed up.  They talked about their lists and their dismal performance at the event.  Then, Rik had another Black Library Corner where he discussed the book ‘Betrayer’ by ADB!  Kyle then kicked in with a Hobby Hot Spot where they discussed a replacement for the ‘Tenax 7R Space Age Plastic Welder’ they featured in a previous Hobby Hot Spot.  They closed out the show with ‘In The Crosshairs’ where they took a good look at the Dark Angels Codex.  They talked about their first thoughts on the codex, the units that jumped out to them as being impact units, and went on a tangent about 6th Edition in general. They also discussed their final thought on this codex and its place among the top tier.

Opinion:  I really had a debate about putting this one in the number one slot, to be honest with you guys.  From top to bottom this really was an outstanding show this week.  It was nice to hear from Reese and he was hysterical on Rapid Fire, the Hobby Hot Spot was worth its weight in gold, and they boys did a good job looking at the new Dark Angels codex.  Call this one 1a then, great work guys!
The 11th Company – Episode 148

Highlights:  This week the boys opened up their show with ‘This Week in Gaming’ where they talked about the games they have been playing lately.  This including a conversation about the triple Helldrake list Pat ran and Daemon Bomb lists.  Next, in ‘Pat’s Corner’, Pat had an interview with Matt Weeks from Adepticon and they discuss their event and some of what they are planning for it.  Pat the talked to Chandler from ‘Feasts of Blades’ and they discussed what they are hoping to do at this year’s event.  Next up, the guys get back to their List Building segment and this week the build a Death Company/Storm Raven list. In the community segment we heard from a lot of other podcasts, like Hitting on 3s, Frontline Gaming, the Heroic 28s, Screaming Heretics, and much more!  The boys closed out their show once again by answering questions from their Facebook page.

Opinion:  I really liked this week’s show if for only one reason; one of my favorite segments was back!  I absolutely loved it when the guys would build lists live, and you could hear what they were thinking when they added components to that list.  I have already added my list to the roll, get them in early or else you might have a long wait to have your list built.  Also, hearing from Matt and Chandler, two big time TOs was also entertaining.  Overall, another great show from the 11thCompany!

The Heroic 28s – Episode 60
Highlights:  This week the boys finished off their review of Codex Space Wolves.  They opened up the show with a discussion about Forgeworld in competitive events, specifically WarGamesCon and the Railhead Rumble.  Next, the boys continued on with the review of Codex: Space Wolves, starting off with the Elite section and spent a lot of time on the Wolf Guard Pack and Wolf Scouts.  They then moved on to the Fast Attack choices, starting with the awesome Thunderwolf Calvary, and moving their way through each of the selections, making sure to offer up something useful about each.  Next up, the guys talked about the Heavy Support, with all of the vehicles being about the same as any another MEQ, and of course focusing on the great Long Fangs!  They close out the show with an overview of the Wolves themselves and typical competitive builds for this army.

Opinion:  This week’s show was a great example of why I love their new format, starting off with a great opening monolog about Forgeworld.  I share a lot of the same views as the guys, while Forgeworld might not break a game or an event, I do feel it is greatly skewed in an Imperial direction.  And the full review of Codex Space Wolves was outstanding, and has made me want to dust them off.

The Independent Characters – Episode 70
Highlights:  This week the boys do their annual ‘Year in Review: 2012’.  They open up the show with some announcements before moving on to the ‘Work Bench’ where they cover what they have been doing lately in gaming and the hobby.  Next, the guys started their coverage of the ‘Year in Review: 2012’, where they covered all of the releases from GW, Forgeworld, Fantasy Flight Games and the Black Library month-by-month.  They started with the month of January and the White Dwarf that was supposed to cover the 25th anniversary of 40K, and didn’t, and Hersey era releases from Forgeworld.  Some of the other highlights of the year included Zone Mortalis, the long awaited Tyranid and Space Wolves second waves, the new GW paint range, Necrons second and third waves, 6thEdition 40K, the Daemon release and re-write of rules, Dark Vengeance, Horus Hersey: Betrayal, the CSM Codex, the new White Dwarf format, and the Megaforces.  They close out the show with a look back and an evaluation of how good they thought the year was and what they hope to see in 2013!

Opinion:  I absolutely love when the guys do one of these shows, and I believe this is the third one they have done.  All too often one forgets what had come to pass in the previous year.  I know a lot of people believe that this was a pretty light year for 40K, with only one codex and a new edition, but looking back it really was pretty eventful.  A new edition, new paint line, new White Dwarf format.  GW was pretty busy.  This is a good one to sit back and reflect on.  Nice job guys!

Highlights:  This week the gang bids a farewell to Commissar Random as he is going on assignment to Japan until April.  They open up with the news where they talked quite a bit about the Dark Angels release.  They then move on to what they have been up to lately in the hobby and gaming.  Next, Jon discussed his Techno Barbarians list, where he allies in Orks counts as Adeptus Mechanicus with his IG, and some of the models and bits he used for his Ad Mech.  Then, in the Commissar Random’s Uplifting Primer, the guys discuss their recent 3 game campaign briefly.  They also discussed playing your opponent’s army and the advantage to swapping armies with your friends for a game.

Opinion:  Two things right off the bat:  First, sorry I missed you guys last week, stupid RSS feed.  Second, Jon you will be missed my friend.  I am probably one a few people who can remember the show before Jon joined the cast.  And I can tell you for me, his addition added quite a bit to the show.  While I realize his departure is only temporary, the next couple of months will be hard with him behind the mic.  Farewell, Jon, and hurry back!  Great final show as well.

Honorable Mentions– All great podcasts that just missed this cut this week, but you should still check them out, in no particular order:
Signals from the Frontline ***Explicit*** New Releases, BAO, Daemons, DA, and more!
Jaded Gamercast – Episode 110 ***Explicit*** Model of the Week: Best of the new DA, and a really goo look at the new Codex
Skardcast – Episode 29 Gamer Psychology: The Enterprising Gamer and Dark Angels
The Eternal Warriors – 47 Bloodbowl
Life After the Cover Save – 61 ***Explicit*** Thunderdoom Survivor Series: Topless vs. Longhair, prank phone calls, and Josh tries Blood Angels

6s to Hit – Episode 15 ***Explicit*** Dust Tactics
Tyrant’s Due ***Explicit*** Dark Angels and Chaos
Hitting on 3s – Episode 15 ***Explicit*** New Dark Angels, latest Tournament results, Black Library review, and more!
Southern Inquisition – Episode 5 New year of 40K, Black Library Review, Crusade of Fire, and much more!
Death or Glory – Episode 7  Christmas and Chaos!
So, that is it for This Week in 40K podcasting, thanks for reading. Got a podcast all about 40K, or mostly 40K that I am not listening to? Let me know about it, [email protected] and let me know about it.  Also you can find me on My YouTube Channelfor Battle Reports, Tactics, Reviews and more! Disagree with my review? Post comments for that too!