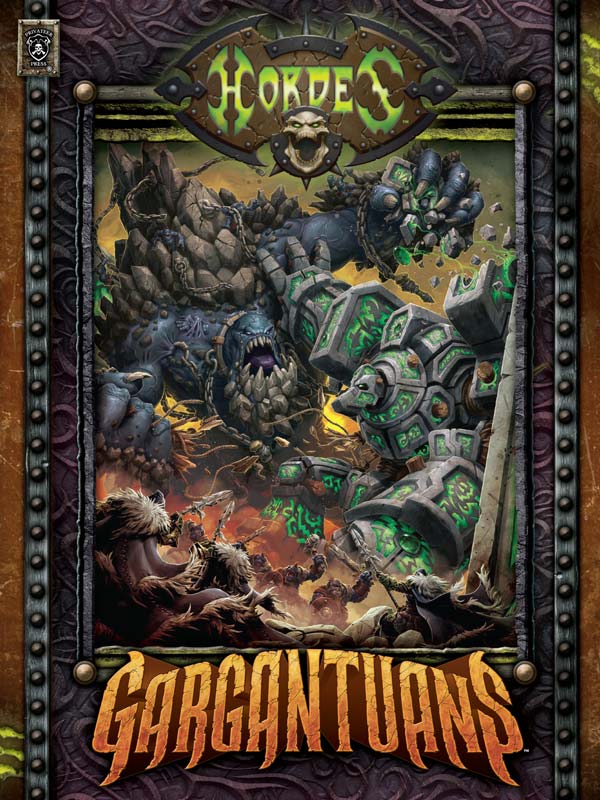 Looks like Christmas came early this year! Legion got the Sleigh, and Skorne got the presents.  Gargantuans came out this week, and with it a bunch of new goodies for all of the Hordes factions. Flipping through the new entries, it looks like everyone got some really useful new models.

Of course, as a Skorne player I have very little room to talk about anything that other factions got. and I’m too giddy about all my new stuff to care much about what other people got! I’m going to try to go through each of the new entries and give a first impression on how useful I think they will be in Skorne. Of course, take all of this with a grain or two of salt, as we’ll need a lot more playtesting before we can say anything for sure on these new models.

I’m going to go through the new releases one at a time. I’ll be ranking them from best to “worst” (worst being relative, and still pretty cool). This ranking is likely different than a ranking given by other members of the skorne community, because it’s my own personal opinion which is influenced heavily by my own play style and experience.

1. The Mammoth. OK, this one is probably on the top of everyone’s list. In a book that’s all about the new huge based models, the release should center on the Gargantuans. Skorne got the best Gargantuan, period. No one is arguing this point. It’s like Stormwall, it’s just obviously better than the other Gargantuans that came out with it. It’s probably better than some of the Colossals as well. Really, the Mammoth needs a full article to cover everything there is to talk about it, with its stack of abilities and interactions with a faction chock-full of beast support.

Don’t worry, I’ll be putting up a full Mammoth review when it officially hits stores next month. For now, I’ve been playing with a Mammoth proxy, in the form of a Siege Animantarax (who finally has a use in life). I haven’t been disappointed. It has done well consistently, and will likely be seen in tournament lists through the next year. This guy is the capstone centerpiece we wanted in a Gargantuan, and is the cause of a lot of envy from the other factions. It easily claims the top spot for Skorne.

2. Mortitheurge Willbreaker. This guy comes in a very close second, depending on how you’re doing your ranking. If you base it simply on what model will be used in more lists on average, this guy is top pick. When we first found out that a new 2 point solo was coming, I was somewhat skeptical. As I’ve talked about at length before, Skorne is spoiled for choices in the 2 point solo category. this guy would have to be amazing to fill one of those slots. Turns out, the willbreaker will likely be the first solo in every list, regardless of caster.

His big draw to me is Puppet Master. In a game so reliant on dice, the ability to re-roll dice is always powerful. Choosing individual dice out of a batch of rolled dice is the strongest re-roll in the game. It takes risky assassinations into a comfortable zone. Assassinations that work on average will rarely fail with puppet master. You can find a use for it almost every turn. Top it off with Ancillary Attack (ask Menoth how useful that is) and beast master, and you have a very solid model. He makes assassins better (spell or melee assassins), he lets small control area casters spread out on scenario, and he lets you be more sure that your bronzeback will kill what it goes after. All in all a huge win for Skorne.

3. Incindiarii. I honestly don’t think these guys have been talked about enough. The focus has been on all our other releases. Honestly I’ve been extremely excited about this unit since the stats were seen at WMW last year. For a unit with NOTHING written on the back of their card, they are a really cool unit. These guys offer a really solid anti-infantry option in a faction that struggles with high defense. Auto-fire is a big deal. 6 3″ AoE shots will set multiple models on fire every turn. In addition, they have CRA if you need to hit specific models. 2-man CRAs are Rat7 pow14, which can do damage to heavier infantry, or if you need to hit a model in the center of several models you want to light up. In a pinch you could do a full CRA, getting up to RAT11 POW18 which can dent something heavier. You won’t do it often, but it adds some flexibility. Overall a very nice unit, and one that I’m very excited to try as a revive target for Mordikaar…

4. Despoiler. Speaking of Mordikaar! One of our less popular Warlocks got himself a new pet! Actually, Mordikaar is a really fun caster that I just started getting in to. The Despoiler has a ton of synergy with his Warlock. Void spirits are really good witht he Void Lord. free void spirits are Really good with him. Dark Shroud helps deal with armor which has always been a weakness in Mordikaar lists. A free upkeep a turn lets Mordikaar keep Hollow out there and spend all his resources making new models. And the animus works well in a magic denial list that you can do with Mordikaar. Overall this guy is a huge addition to one of my new favorite casters. He’ll have some use outside of Mordikaar as well, but loses out on Dark Shroud and has a hefty price tag. Naaresh might use him just to play some cute tricks with Lamentation + the Despoiler’s animus which together with quadruple the cost of any upkeeps or spells in the affected area. Harbinger wants to Purify? She’ll need a wrack and a Heirophant just to cast one Purification!

5. Makeda3. I really think that after playtesting her I might move her up in this order. She’s not a bad caster, just different than what we all expected from our traditional buff caster. Someone gave her a shiny new sword and suddenly she doesn’t give a darn about her swordsmen or Karn (In fact Karn isn’t even in her theme list anymore!). Now she’s back as a super solo who wants to play way further upfield than Makeda has ever gone before. Her feat sounds amazing. Unfortunately, it’s paired with a spell list that seems out of place with an army’s supreme commander. She has one spell that will never be cast (sunhammer), an interesting control spell that I’ve never seen cast before, and 2 spells recycled from Ravyn. As a Ravyn player, I think they work a ton better on Makeda for all kinds of reasons, but I still have memories of trying to make them work for Ravyn and failing.

As should be obvious from the above paragraph, I have yet to actually put her on the table. This is all first impression stuff. I am going to play her a bunch and come back with a better review of her. There are some fun things she seems to be able to do, and a list of dreams she wants to live. Maybe someday I’ll pull of that perfect feat turn where she loads up to 10 Fury, moves three or four times with eliminator and personally demolishes 3 heavies. Most of the time she’s not going to do anything near that crazy, though. I feel like Makeda3 is probably (again at first glance) the worst of the new casters in this book. But she’s in no way bad, just not as good as Morvhana, Rask, Grimm, etc.

6. Reptile Hounds. OK, this is the one Skorne release I’m not a big fan of. Once again we’re looking at a 2 point slot. Except that they have Flank with each other, so you need 2. It may be hard to find room for that. Removing tough is good, and removing from play is good. If the animus wasn’t SELF, it would be amazing. Being limited to using it on a caster or the hound itself is limiting. A reptile hound has 2 possible roles, either it’s going after tough infantry or trying to dent bigger targets in pairs. It’s ok at both without being really good at either. Each hound is probably only going to kill one tough model a turn (two max, but that’s hard with a small base and mat 5). If that tough model is valuable, this could be decent (spot removal for Janessa, Rhupert, etc). If it’s a single Errant, probably not as good.

Some casters will enjoy having the animus available, but it does have some issues with the ones that really want it. Morghoul1 would be really happy chewing through a unit and ignoring tough then sprinting away. Except that Overtake and sprint require you to destroy a model. Makeda3 might like one, but on her feat turn she can’t use it and still generate fury from the feat. Other turns it could be helpful, though. I think the best caster to use it on will be pHexeris. His feat still works with take down, so you can start some chains with reptile hounds, or put it on Hexeris himself and kill multiple models with beat back and let them move on to kill others. You can also cast the animus with a Shaman, who might be able to take down another model or 2.

I’ll definitely give them a try, because they seem fun. Maybe they’ll surprise me. Tough is definitely more common than ever, and ignoring it is rare. at first glance, I would rather bring a unit of slaughterhousers for 6 points than several hounds, but I also haven’t played with lessers before. Maybe they’ll grow on me.

7. Swamp Shamblers. OK, this isn’t a Skorne release. but of the Minions release, it’s the only one Skorne has much chance of running (unless you bring Rorsh and Brine with a bunch of razor boars?). It’s like having pAlexia in Hordes. These guys are obviously good with Rask, but are they worth taking in other armies? Generally speaking, Skorne has decent to good infantry options. It’s a tough sell to take this unit of zombies over slingers, karax, or (again) slaughterhousers. However, I can see some Warlocks really liking a cheap reanimating speedbump. This mostly applies to beast-heavy casters. Morghoul often doesn’t take much infantry. Paying 6 points for something to screen your beasts might be worth taking a look at. Unfortunately, we’re unlikely to set up a big tarpit like mercs can do with Alexia running multiple units in front of her. Our infantry casters (Zaal and Mordikaar) really want nothing to do with these guys due to all their fun rules being “Friendly Faction”. Still, with a task master these guys might be pretty good. I don’t tend to run a lot of Minions in general, so this might be the one release I don’t pick up for Skorne.

That covers everything. All in all an outstanding release for Skorne. Taking all of our releases together, I can see why a lot of people are saying that Skorne “won” this book. I am very very happy with the stuff we get. Luckily for everyone else, the other factions also got some really cool stuff.

To my fellow Hordes players: what is your favorite release from Gargantuans? What models will see play as soon as they get released, and which ones might be taking a back seat outside of friendly games? Watch for more Gargantuans articles as the releases come out and I start getting some more actual table time to match my random speculation in this article.