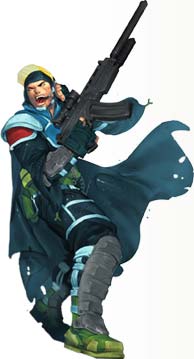 Andyman is back!  This time we take a look at our past, glorious or otherwise, in the forces of Ariadna. Lets go!

These guys are the only link between what we (presently) consider our history and then shoot them forward a few centuries.  It’s the little details that make these guys an awesome faction!  Did you know they are the only humans in the Human Sphere who can still produce Coca-Cola(r)?  Claymores with rifles?  Check.  Russian infantry with bazookas?  Check.  Werewolf-like soldiers with dual-wielding chain rifles?  Wait…what…?

Ariadna; the Human Sphere’s only living link to its past.  Descendents of the survivors of Humanity’s first attempt at colonization of space.   Living and growing using the same technology for centuries, these rugged individuals have endured on a hostile planet cut off from a home-world that left them for dead.  Now the Human Sphere appears and considers the planet rich for the taking.  The people of Ariadna have but one response; come and get it…

The last image anyone saw of the crew of the fateful ship was it being engulfed into a wormhole.  From the view of the rest of Humanity, they were on their way to greatness and would report their findings within weeks.  Weeks turned into months and turned into years;  nothing.  Written off and with no way to effectively communicate to them, these pioneer ships were given up for dead.  The crew and cargo of the colonization ship Ariadna had no idea they would be cut off and be forced to survive in an alien and unforgivable environment. Order was quickly established but rivalries still remained.  Despite the promise of cooperation and backing of several nations, the people of the colonization ship fell into national pride.  Most of the Russian natives, the bulk of the colonial military, established a dominant territory and soon the others created their own domains.  Much of the cargo of the Ariadna consisted of farming and replicating technology, so life could continue despite skirmish battles.

The world that the Human Sphere would name Ariadna was rich with fertile land as well as cunning natives.  The Antipodes are dog-like creatures possessed of limited intelligence that attacked the colonists of Ariadna en mass.  Despite several waves, they were fought back and before it was all over it was discovered that pregnent humans infected with Antipode saliva would produce a hybrid breed.  This new species would be integrated into the fighting forces of the Ariadna although in many cases they are treated as lesser citizens…

Years roll on and the people of Ariadna continue their existence wondering what is in store for their future…the Human Sphere answered.  It did not take long before the various industries of Earth saw Ariadna ripe for the plucking but it was when the major factions became involved that the truth was revealed.  For the Human Sphere a footnote in history was discovered and finally closed; for Ariadna, it was a time of reckoning…

After several skirmishes and the support of the Nomad Nation, the O-12 recognized the Ariadnan nation as a separate political entity.  Now, the descendants of the original colonial ship that was sent in to the void of space for exploration has reconnected with their home; welcome home? Caledonian  Highlander Army
The inheritors of a rich history and a fierce determination these are the survivors of the Scottish delegation to the Ariadna colonial project.  Highlanders by every definition of the word these soldiers grew up in some of the harshest areas and were born with claymores in their hands.  Each child is raised with pride in their clan and taught how to fight.  When they are not busy fighting each other, they are sometimes called upon to perform missions for the good of the clan or Ariadna.
The Caledonian’s make excellent use of the Wulver’s and their ability to lead any good charge.  Heavy hitting troops in close quarter combat make up for their lack of heavy weaponry.  If you choose to have William Wallace lead your army, then you may field incredible Highlander troops that are no longer impetuous.  Hit them fast…hit them hard.  There can only be…nah, too easy. Merovingian Rapid Response Force
The descendants of the French colonists settled in an area that had the frontier on one end, and all the other nations on the other. Through their history they had to quickly adapt and find a niche in order to survive the predations of their fellow colonists.  Opening and maintaining communications and trade routes became a priority for the early colonists.  This lead to the creation of the Rapid Response Forces and the descendants of the French colonists have survived ever since.

The Merovingians are quick to deploy and fast to move about the field.  “Minutemen” forces in the extreme, these guys pack a great punch for being so mobile.  Combining speed and light weapons, they can still be a match for any force currently on the battlefield.  Several select forces specialize in hit-and-run tactics that utilize camouflage and surprise.  Sneaky and resolute, they are required to deploy at any time all over Ariadna!

Can the Human Sphere beat down these low-tech upstarts?
0