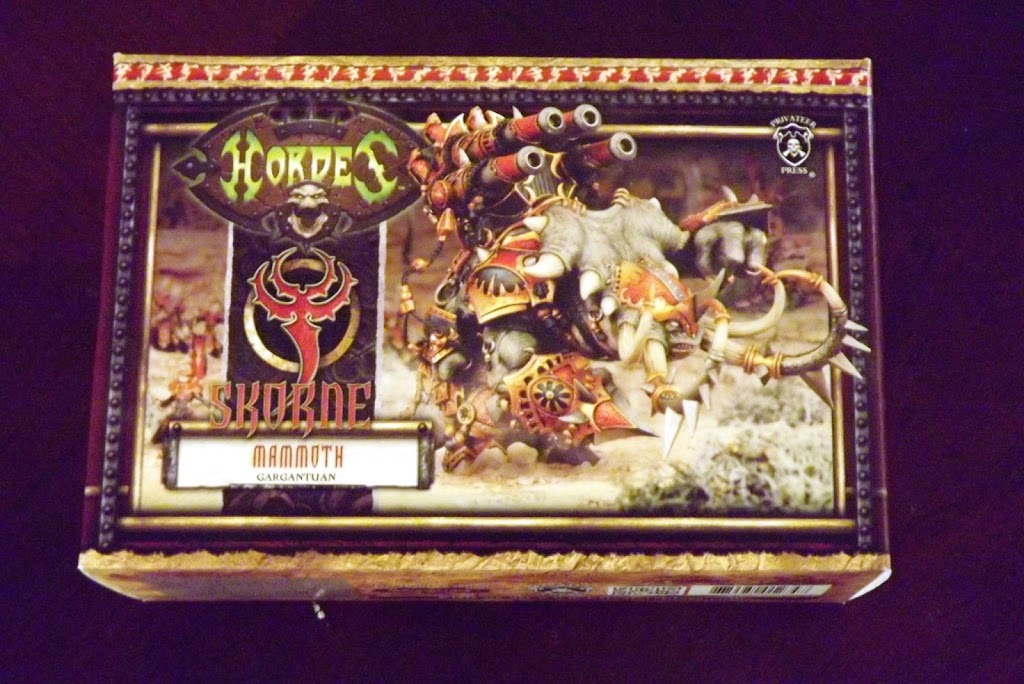 BOOM – BOOM – BOOM!!! Take a look at the highly anticipated Gargantuan release for Skorne: the Mammoth! This will be my first attempt at an unboxing article. As you probably know from my previous articles and comments made by Caldera in his posts, I’ve been very excited about this model’s release. I couldn’t wait to get my hands on it, so I volunteered to do the unboxing for GentleBen The box opens up to several large resin chunks, 2 blisters of metal and resin pieces, the base and stat cards. OK, that’s a lot of pieces. I don’t know the piece count for all of the Collosals and Gargantuans, but this one might be a record. 62 pieces including the base! at first glance only the Judicator might have more bits and pieces. Here’s a closer shot of the collection of smaller metal bits. lots of tassels, spikes and chains to add a bit of flavor to the model. of course, you could easily leave some of these off if you find yourself having trouble getting them to stay in place. Here’s one of my favorite parts of the Mammoth, and the one part that is going to make it difficult on the table. the head looks a bit different than the standard Titan heads, and has a whole lot more tusk. one big resin tusk and a smaller metal tusk for each side. Here’s another angle on the head. there’s a good bit of flash on the head and tusks, but not as bad as it could be. The main torso comes in two pieces. the fit is actually very clean, and the two pieces leave very little seam. The back plates have the same level of detail we expect from Skorne armor. The important thing on this shot is the gap in the neck. It appears to be big enough to place decent-sized magnets without having to drill into the resin, which should help with some of the in-game issues with the large tusk overhang. It wouldn’t be a Mammoth without that amazing gun! The gun assembly looks really nice. The detail on each barrel is great. The pieces look like they will fit together nicely, but there is a lot of trimming and shaving that will have to be done, especially on the central double cannon. Finally here’s a shot to give it a little bit of scale. I’m not sure how those Paingivers expect to handle a beast this large with those tiny barbs on their whips!

So after a long wait, we finally get to see the Mammoth. Does it live up to expectations? Now that we’ve seen all of the Gargantuans and Collosals (except for the Convergence one coming soon!), how does the Mammoth stack up in comparison to the rest of the giants? Move on that soon!