Brent: How Diverse is Your Terrain? 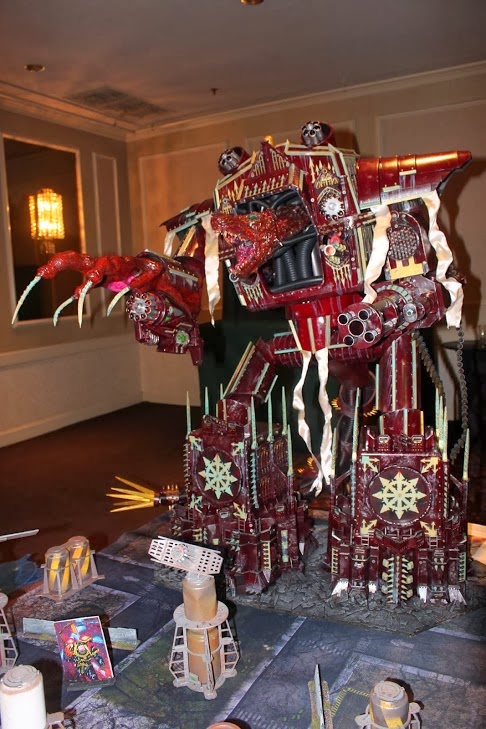 I’ve been reading about the Las Vegas Open and one comment kept coming up over and over before it really sunk in – about TERRAIN!

It was a line something like, “Every table had at least one line of sight blocking piece of terrain!”  That sounds great.  It is great!  But the thought that finally sunk in was, “Why is that so unusual it’s a selling point?”

Hello again, BoLS Faithful.  Welcome to Terrible Tuesday.  I’m your host, Brent, the humble proprietor of the blog Strictly Average.  The title is a double entendre combined with a dirty joke that never fails to entertain me, but then again I’m easy to please.

This isn’t the type of article that requires much explanation.  Pictures, please… The two pics couldn’t be more different, but note the similarities… other than the MegaMat that Frontline Gaming and TableWars are justly proud of.  There is line of sight blocking terrain.  In the first picture, the building in the middle lacks windows on the ground floor.  There’s a billboard in the background – and isn’t that a simple but effective idea?  The ice terrain makes use of the same billboard but is also broken up by the icy hills.

You could make that, no matter how little practice you have making terrain!  Insulation board cut, stacked, glued, shaped and painted.  Add a tree, or not, your option!

The opening picture shows a rather extreme example of terrain, the never-humble Chaos (Imperator?) Titan.  I wouldn’t suggest something like that is necessary right out of the gate.

Speaking of a rather extreme example of terrain…! Unreal cool.  Maybe it’s not practical, but time-consuming, crazy-cool nonetheless.  You can check out the thread on Work in Progress.  Enjoy!

(Okay, it’s not really meant primarily for wargaming, but you’ll have to read the thread…)

This isn’t the first Terrible Tuesday article on terrain, and the primary message has been about adding some diverse terrain to your collection with as little muss and fuss as possible.  Basically, it’s Beginner Terrain 101.  Given blog articles have a shelf life of a week – if you’re lucky – there’s a good chance you either haven’t seen these or don’t remember them.  Take a look, let me know what you think. The blog Confessions of a 40K Addict has a great set of PDF’s for constructing foam terrain.  Really, do yourself a favor and follow this LINK.  Then show him your appreciation by clicking ‘Follow.’  Hey, Bloggers work for subtle reinforcements like that! He has numerous ‘Print and Play’ files on his blog, the building above being an example of a simple one even I’d feel comfortable trying to build, and I’m not great with foam core.

If you think 6th Edition is all about shooting and close combat isn’t a viable means of winning, chances are you’re playing on a sparse board!

As with everything in this hobby, the investment determines the return.  Do yourself a favor and turn your hand to diversifying your tabletop.  If your board is all hills and City Fight ruins, take some extra time to add a billboard, or a fence, or a silo – anything, really, as long as something can actually hide behind it!

Not to mention, isn’t playing a war game like Warhammer, 40K, WarmaHordes, or Infinity just that much better on an interesting table?  Yeah, that’s a rhetorical question.

If you’re interested in checking out some pics of the LVO event, TastyTaste from Blood of Kittens posted some event coverage; just follow the underlined link.  Here are some examples I couldn’t resist adding.