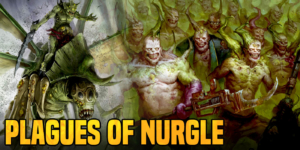 Iron Kingdoms makes campaign design a SNAP for the gamemaster.  Here’s why:

The career system in the Iron Kingdoms Roleplaying Game has been constructed in such a way that makes campaign design quite easy, albeit requiring a level of discussion and even cooperation with those participating in the game as players. Today, we’ll be examining this concept and its overall effect on the game.

If anything, the IKRPG is flush with career concepts ranging from the comprehensively applicable to the incredibly niche. While the Core Rulebook leans strongly and appropriately towards the former end of the spectrum, expansion material released through Privateer Press’s various publication avenues have introduced a cavalcade of careers and adventuring companies that drive the theme and direction of campaign design in a very assertive manner. With nation-specific careers linked to unique military elements like Stormsmiths, Knights Exemplar, Amethyst Rose Gun Mages, and Assault Kommandos, it would be highly inappropriate to mix many of the available careers save for campaigns most carefully designed with this concept in mind.

Even when national elements are taken into account, many of the careers within the given subset may not be best applied or suitable for a given campaign. For example, a Cygnaran Unorthodox Engagement Team regularly engaged in urban infiltration and subterfuge will most likely not be the best place for a character with the Storm Lance career since their talents won’t be of much use in bar fights or sneaking around in heavy, noisy Storm Knight plate armor. Also, horses don’t make the most stealthy of bedfellows, unless, of course, your name is Connor Davenport.

This may sound prohibitive to many, but I personally feel like this is a strength of the system since party creation in the IKRPG can and often does act as a catalyst for campaign design and vice versa, where with other systems the two are routinely mutually exclusive entities where neither serves the interests of the other. I have too often engaged in campaigns that are fabricated on the notion of five random strangers without any kind of pre-existing fellowship or even common loyalty meeting in a tavern wherein an exciting, yet contrived, journey of fame and fortune is commenced.

This isn’t to say that there isn’t a place for this type of thing, or that games founded on such grounds are without value, just that I feel a more collaborative narrative process can be attained when all parties are involved in more parts of the procedure, and that I find such results to be a more rewarding experience. The Game Master will obviously need to do much of the work behind closed doors, but I have found that the most successful campaigns I have participated in start with communal character creation as opposed to simply showing up to the first game session with a character that was designed in a vacuum without heed for the nature of the campaign or the other members of the party.

This leads me to the point that the campaign design phase can be made both easier and more personalized for the player characters when character creation precedes the actual writing of the campaign. This comes with the obvious difficulty of requiring a break between the character creation and campaign writing steps since campaigns don’t usually manifest out of the aether. As mentioned earlier, the impetus of the career system on appropriate campaign planning can and will often make this process faster and more enjoyable than it might be otherwise.

Adventuring companies likewise have a similar effect on character creation, acting as a driving force for conceptualization due to the inherent restrictions found therein. Some adventuring companies are fairly general in application, like Mercenary Company, so they leave a lot of room for theme and mood in all respects. Other adventuring companies, like the Inner Circle of the Convergence of Cyriss, will aggressively dictate the nature of the campaign as well as character design and backstory.

As an exercise in the process, let’s start with Heroes of the Resistance, the adventuring company designed around the concept of a Llaelesse Resistance cell. There are several implied national and stylistic elements at play. The rules for starting a resistance cell are simple: characters either need to be dedicated to the resistance and/or mercenaries for higher.

This immediately implies certain restrictions to character nationality and consequently careers associated with specific nationalities. Obviously Khadoran and Cryxian characters and careers are out. As the primary offending occupying force, pretty much any and all Khadorans would be viewed with extreme suspicion to members of the Resistance. Careers from other nations might be appropriate, but special care would be required in the writing of that character’s backstory in order to justify their presence with Cygnarans being the most likely to be seen since many members of the Cygnaran military that were cut off when Cygnar retreated from Llael ended up joining the Llaelesse Resistance. In this case, certain classes requiring supplies only accessible through the Cygnaran military, like storm chambers, might not be great choices. Careers of the Protectorate of Menoth would likely need to be chosen cautiously or most likely left alone entirely. Although the Resistance has cooperated with the Protectorate’s Northern Crusade, there is currently a fair bit of tension between the two groups since Hierarch Severius claimed Leryn in the name of the Protectorate. Ordic characters would certainly fit in provided that they do so either as mercenaries or as members of The Order of the Golden Crucible, which was formerly headquartered in Llael before Khador’s invasion. Where non-human characters are concerned, most would likely only serve as either mercenary elements with little operational knowledge or as certain elements of dwarves out of Horgenhold Fortress. When Khador sacked Leryn, which is a sister city to Horgenhold, many of the dwarves living there were injured or killed, so there exists a certain amount of friction there, providing many a dwarf a reason to actively seek out the Resistance as an employer or even more. Iosans would expectedly have little interest in the Resistance, while Nyss refugees might seek out employment as mercenaries to the Resistance, potentially creating a good outlet for the Urban Nomad career. Trollkin, Gobbers, and Ogrun can all certainly find a place to fit in as well, however, since Llael’s citizens are primarily human, it would be logical to assume that most members of the Resistance would be as well.

The choice to use the Heroes of the Resistance adventuring company for your game also carries with it implied suggestions about the nature of the campaign that they’ll be participating in. It could be something as mundane as harassing Khadoran military elements, something a bit more consequential like discovering the fate of Prime Minister Glabryn, who sold his own country to make Khador’s invasion a much easier endeavor, or something as world-shaping as finding and protecting the heir to the throne of the once-great nation. However, the locale of such a campaign would most likely be within Llael itself with the potential for brief missions abroad, perhaps escorting a noble to Ord or securing a supply shipment sent from Cygnar.

The campaign itself then shapes potential career options as well. If it’s a campaign of urban infiltration, careers designed around mounted combat typically won’t be smart options unless the GM specifically goes out of their way to make them so. Careers like the Spy, Guttersnipe, Thief, Cutthroat, Duelist, or Pugilist become highly appropriate. If the campaign involves time spent on the roads intercepting supply shipments from Khador, mounted careers would not only be appropriate, but likely a blessing.

For those new to campaign design, or those who might regularly experience writer’s block when designing campaigns, this makes the Iron Kingdoms Role Playing Game a really strong system and setting choice. It creates a drive for all people involved to do more than simply show up for game time, and it can also serve as a means to prod your players away from simply being murderhobos in search of sweet loot.

Not that there’s anything wrong with that.

Stay tuned for more articles on the Iron Kingdoms RPG!