Hordes – Argus Moonhound Under the Microscope 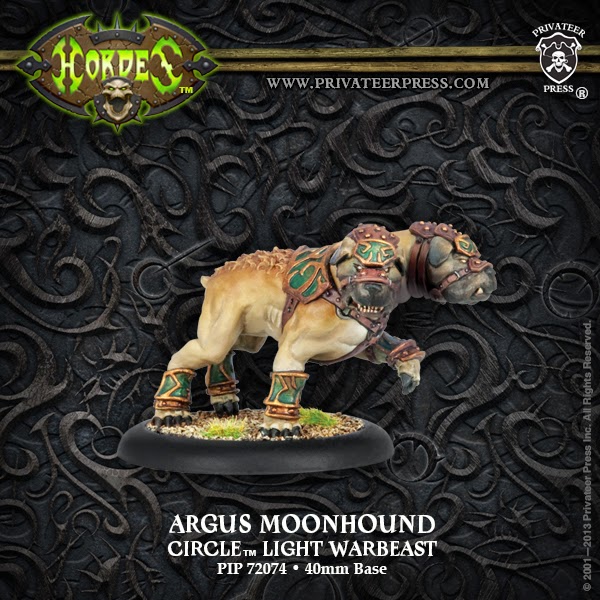 Circle Orboros recently received reinforcements in the form of the Argus Moonhound. What exactly does it bring to the table?

The Circle Orboros has a plethora of ranged models in their faction, but until recently, particularly with Morvahna the Dawnshadow’s release, most of them, save a few notable exceptions, rarely saw table time. While the Tharn Bloodtrackers with Nuala the Huntress and the Druid Stoneward and Woldstalkers have been commonplace since the release of MkII, their many other ranged units, solos, warbeasts, and their battle engine typically have been left on the shelf, often due to a lack of reliability. Morvahana, as mentioned earlier, has greatly increased their reliability through Scales of Fate, allowing them to re-roll lousy attack or damage rolls at the cost of Morvahana suffering d3 points of damage. Consequently, many previously shunned ranged models and units, like Reeves of Orboros or the Tharn Blood Pack, finally began to see time at the top tables of many national-level Masters tournaments.

Fortunately for anyone who doesn’t play Circle Orboros, Morvahana the Dawnshadow can only ever be present in a single list of a player’s pair or trio, so you needn’t always automatically suffer at her hands in any kind of standard character-restricted tournament, which is to say the lion’s share of them. Unfortunately, for Circle Orboros players, this has meant that the viability of ranged forces outside of Morvahana lists would return to the norm when building for pretty much anyone else.

This is where the Moonhound comes in, much to the celebration of an exciting Circle player base. Stat-wise, the Moonhound is what you’d expect from an Argus. At DEF 15, ARM 14 with 20 boxes, it will take some dedication to take down, but it’s far from being incredibly tanky. It’s also SPD 7 with Pathfinder and carries pair of MAT 5, P+S 11 melee attacks, giving it solid mobility with the option to pick off straggling single-wound models via boosted attack or to finish off multi-wound troops with boosted damage.

The real show comes from the two earlier-mentioned abilities: Mark Target and Hunting Howls. The former ability, most commonly associated with Cygnar’s Rangers, grants +2 to ranged attack rolls made by friendly Faction models against models within 5″ of and in line of sight of the Moonhound. The second qualifier is actually better suited to the Moonhound thanks to its Circular Vision rule, allowing it to see in a 360-degree arc around its base. At SPD 7, the Moonhound can apply this bonus from up to 19″ from its initial location during any single turn.

Anyone who has ever played with or against Cygnar understands how big of a deal that +2 bonus is, and with Circle Orboros, its effect is extremely well-suited as well. With +2 to ranged attack rolls, Reeves of Orboros are effectively RAT 7 when firing solo or RAT 9 when firing in pairs under a Combined Ranged Attack. In the past, Reeves had to rely on paired CRAs to trigger their Snap Fire ability, which grants them an additional ranged attack when their first destroyed their target. The technique to do this involved a complicated waterfalling pattern that it turned out wasn’t particularly reliable at all, since missing a single attack roll, failing to penetrate with a damage roll, or not destroying a target due a passed Tough check meant that you effectively failed one attack and lost a good deal of accuracy on a second with a unit that was only typically going to be making ten attacks at-most. With Mark Target, the need to waterfall has drastically been decreased while reliability with the technique has greatly increased since accuracy is much less of an issue at an effective RAT 7 instead of RAT 5.

Models with ranged spray attacks are also hugely benefited by the Moonhound’s presence, particularly the low-RAT Winter Argus, the Pureblood Warpwolf, and the Celestial Fulcrum. When producing a large volume of attack rolls with a single ranged attack, the +2 bonus effectively becomes multiplicative on these models with every attack that they make.

The Moonhound’s second serious ability of note is its Hunting Howls special action. Hunting Howls causes enemy models to lose Camouflage and Stealth while within 5″ of the Moonhound, both increasing accuracy and removing a common deterrent from range attacks, making ubiquitous problem models like Bane Thralls, Kayazi Assassins, Mage Hunters, or Striders much easier to deal with.

It is, however, worth pointing out that because Hunting Howls is a special action, the Moonhound cannot use it if it ran or charged that turn. The only exception to this is if you brought a Rotterhorn Griffin to apply its Acceleration animus to the Moonhound, allowing it to perform a special action at the end of a charge. The Moonhound’s animus, Hound, also demands mention. It’s an offensive animus that allows the user of the animus to make a 3″ move if its target moves during its activation. While the Moonhound might struggle to hit a target with its lowly Fury 3, it should be pointed out that it can be cast by its controlling warlock, providing out-of-turn movement that can have a variety of applications.

To give a quick sample list, you have loads of options for paired warlocks, but I’m curious to try Cassius specifically for his ability to reduce target ARM via Curse of Shadows, pairing nicely with the Moonhounds increased RAT to make ranged attacks hit more often and with greater potency.

The presence of the Moonhound demands accompanied ranged support, obviously. For this, I’ll look to the Tharn Blood Pack to pair their Treewalker ability with Cassius’s feat while also cranking their ranged output to effective POW 15 with Curse of Shadows. The Pureblood Warpwolf’s Death Howler attack strikes plenty hard already at POW 14 with its 10″ spray, but will be effective RAT 7 with Mark Target. When not firing its ranged attack off, the Pureblood can boost its damage output to a respectable effective P+S 20 by stacking warping for +2 STR, Primal from the Gorax, and Curse of Shadows, more than enough to take on most hard targets. The Stalker is present to lend yet more melee presence. The Shifting Stones are standard fair for any Circle list, and shouldn’t require much explanation. The rest is simple support and filler.

Model-wise, to get a good looks at the Moonhound’s components, check out Ben’s unboxing article from May.

Overall, I’m very excited by the introduction of the Moonhound Argus. It has introduced a completely new metagame to Circle Orboros, one that simply doesn’t revolve around a single warlock to function. 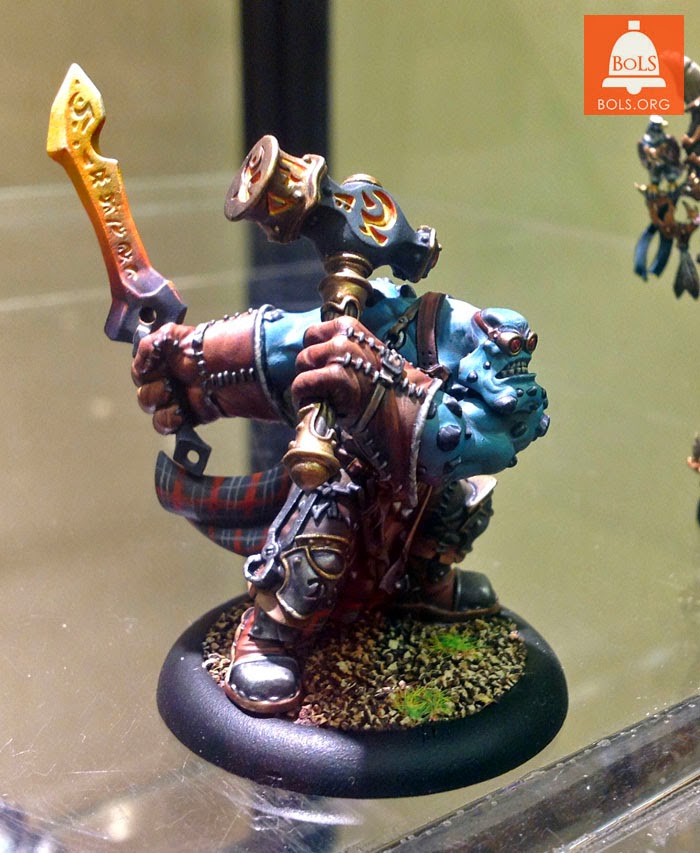