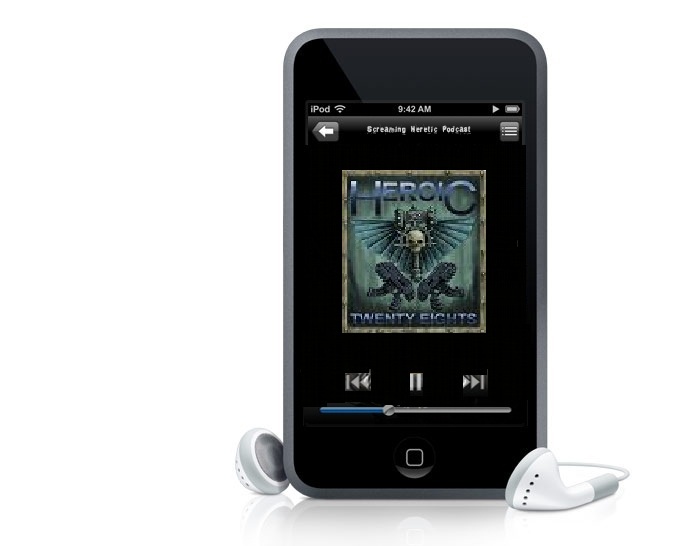 Welcome to another installment of “This Week in 40K Podcasting,”  Here is this week’s top 5!
The Heroic 208s – Episode 96

Highlights:  This week the guys dive into all of the craziness that is this new 7th Edition of 40K!  The boys kicked off the show with some announcements before moving on to some discussion on ‘Net Neutrality’.  This is a very, VERY important issue so take a listen to this, though fair warning, it has an explicit rating.  The moved on to discuss their recent games played and hobby done, which included Chumby’s game against the Daemon factory and Kenny’s fun with Space Marines!  Next, it was on to their loose review of 7th Edition.  They started off with a quick look at the first section of the rules before stopping to mention some of the very subtle changes to the basic rules.  They then move on the brand new Psychic Phase and how it is done, ‘Psychic Mastery’, the rules behind generating powers, ‘Perils of the Warp’, ‘Deny the Witch’, and much more.  They moved on to the Psychic Disciplines, stopping to highlight the most profound spells found here.  Next, it was on to the Shooting Phase and the new way that wounds are allocated, the big change to the D weapons, and more.  It was then on to the Assault Phase and the changes there, including assaulting through terrain, and much more.  They then moved on to Unit Types and the changes to Jinx and Flying Monstrous Creatures, Jump Pack infantry changes, Skyfire templates can now hit flyers, and much more.  They then covered the changes to the Vehicle Damage chart and how big of an impact this is for the game, the effects on Crew Stunned and how this affects the crew, and much more.  They then discussed the changes to Chariots, Open-Topped vehicles, Skimmers, the differences in Ramming, and much more!  They next talked about Characters, Independent Characters, challenges, and the changes found there.  It was then on to the terrain rules and changes there, the very drastic changes to how you field an army now, the new Allies Matrix and everything this has changed as well.  They closed out the show by going over the Universal Special Rules and the changes found here.

Opinion: As we do our rounds of podcasts covering this new 7thEdition, this one happens to be on my list of favorites so far.  The guys did a really good job on picking out most of the major and subtle changes to the game and explaining how the new mechanics of the Psychic phase works.  I really enjoyed the show, guys!  This one was easily my favorite for the week!

Highlights:  This week the guys continue their look at 7th Edition and they kicked off the show with the ‘Embarking’ rules allowing measurement from the vehicle’s hull.  The implications of this wording are huge and how effects from within a vehicle can now measure from the hull. They moved on to discuss the dreaded ‘Invisibility’ rule and how to try to use templates to get around that rule and hit that unit.  Kenny and Juice decided to sit down and talk about their first 7thEdition game.  This included what primary and secondary missions they ran (from the TPM mission pack) and how the game went.  This included some interesting rules that came up during their game and their thoughts on how ‘comping’ the game could be a bad thing for 40K.  They then moved on to talk about some of the fun things this new edition can allow for on the table with the rules for composition now being so loose.  They wrapped up the show by discussing formations and if they are legitimate parts of the game now in 7thEdition.

Opinion:  Continuing on their review of the new 7th Edition rules, the boys kept rolling through the rules that they are picking up on that are different.   I happen to find that ‘Embarking’ rule to be quite interesting, I missed that one on my first read through.  I also like the conversation on how competitive events should handle this new edition, at least at first.  Good show gang!

Highlights: This week Dawson and Bill are fighting the fires in Southern California to record and kicked off the show with what they have been up to lately in gaming and the hobby.  This included some musings on what 7th Edition will bring to the game.  They also talked about a listener list request for a Black Legion competitive list.  Next, it was on to the main topic for the show, 30K Legions!  So they sat down and discussed the current 13 Legion available and how to pick which one best fits you, based on their back story, which characters you like, which primarch best suit you, and more.  They then moved on to talk about the first Legion on their list, the Sons of Horus.  They talked about their play style, some of their special rules, their Rites of War, some of their war gear, and key units and Special Characters in the army.   They moved on to discuss all of the remaining Legions in the book, which included the World Eaters, the Emperor’s Children, the Death Guard, the Iron Hands, the Night Lords, the Salamanders, the Word Bearers, the Iron Warriors, Alpha Legion, the Raven Guard, and the Imperial Fists.

Opinion:  So, for those of you looking for a little break from all of the 7th Edition talk, here is where I would direct you first!  Bill and Dawson covered something I have found very interesting, in that 30K is something new and exciting for us gamers!  They did an excellent job giving us the rundown of which Legions have been made available so far.  I did find myself wishing that they had gone a little deeper into the rules, but overall this was just an outstanding show.  Great work guys!
Screaming Heretic – Episode 65 ***Explicit***

Opinion:  This week’s show was a pretty good overview of the new edition of the game.  I do appreciate the fact that the guys have taken into account that most people should have read the book and just hit on only the points that are the most important.  They did a really good job of hitting the high points, and especially took the time to touch on the FAQs.  I would add this one to your list this week!

Highlights:  This week the guys are discussing the Fall of Damnos!  They opened up the show with some of their reactions to 7th Edition.  They moved on to discuss their week with included games played and hobby completed.  Next, it was on to the guys review of ‘The Fall of Damnos’ by Nick Kyme, a Space Marines battle book.  This battle involved a battle between the Ultramarines and the Necrons, and they opened up by discussing the story of the book.  The miners on this world dig too deep and awaken the Necons asleep on this world.  They are quickly overwhelmed and the Imperial Command Barge in orbit begins to bombard the world.  Then, the Ultramarines respond to the need for aid, led by Chief Librarian Tigurius!  They then move on to the Ultramarines arriving to find that the plant has been overrun by the Necrons, and the cast discussed some of the named Special Characters that are featured in this book.  This included tier stats for those characters like the Flayed Lord, and the encounters as they are outlined in this book.  They also described some of the new terrain and effect rules they drew up for this book, and some are quite interesting.   They then discussed some of the missions and scenarios that they designed for this story, all of which reflect conditions found in the book.  This included creating some new units and rules from some of the troops and units discussed in ‘The Fall of Damnos’.  They closed out the show by summing up the book and their thoughts on the overall story.

Opinion:  So, if you are looking for something completely different this week, to pull away from all of the 7thEdition talk let’s say, you need not look any further then this new show that has quickly caught my attention.  Brought to you by some of the cast of Deep Strike Radio, this show really has its own niche within the 40K podcast world.  Dedicated to the narrative game, the guys work hard to recreate missions, rules and scenarios based are the book and the fluff of the 40K universe.  I have been very impressed with their fist 5 show and will add this to my list of shows on the rise.  Check them out, it is worth it!

Honorable Mentions– All great podcasts that just missed this cut this week, but you should still check them out, in no particular order:
Signals from the Frontline ***Explicit*** General Gaming News, Rumors, List Reviews, Tactics, and Rants!
Life After the Cover Save – Episode 109 ***Explicit*** Doug from Table War is back to discuss the F.A.T. Mat and Jake and Justin from SSo40K

The Kessel Run  Brought you by the Heroic 28s!