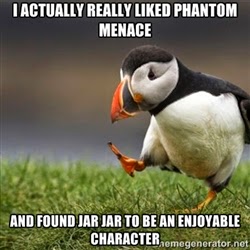 OK, So I am running out of Star Wars puns for the title but Seriously lets take a look at what all the hype is about with the TIE Phantom Expansion for X-Wing.

Hi fellow Gungan lovers (Sorry I take it back, please don’t stop reading….)
I wanted to take some time to go over the upcoming release of the TIE Phantom and see what interesting shifts it may cause in the meta and what fun options it can open up.

The general consensus is that one of FFG’s goals for the Wave 4 release was to introduce more variate in the Imperial build as the TIE Swarm is still one of the most popular and powerful builds available to them.

Even more so than it’s fellow Wave 4 Imperial Release the TIE Defender I think that the Phantom will go a long way towards shifting things around for the Empire. So lets take a look at what comes in the pack.

Skipping over the Ship itself (Even if I do think it looks cool), tokens and dial we get on to the good stuff.

There are 4 available Pilots, 2 Named and 2 Generic with a Pilot Skill ranging from 3 up to 7 and a Squad cost from 25 to 32 so this baby is not cheap.  These points do get you the following though. Starting with the stat line it has a hefty 4 Attack, now that alone should sell this bad boy to a lot of players but the rest of the stats are a little on the low side considering the hefty points cost.  The Action Bar is pretty standard imperial fair right up until the end there when we have the new Cloak Action, which I will get to shortly.

The Maneuver Dial is likewise impressive (Most Impressive…) with a large amount of options even if there could have been a little more green on there but when you couple that with the Cloak Action this is where the fun really starts.

So the cloak action answers one of the weaknesses of the stat line in raising the Evade to a rather high 4 dice base, couple that with range, obstacles or maybe a stealth device (just because…)
You can quite easily end up rolling 7 evade dice with this thing! (Time to buy that 3rd starter set, just for the dice you understand.)

If that was not reason enough to respect the Phantom, Decloaking is even more fun!
Immediately before revealing its maneuver dial a ship can spend it’s cloak token.  When Decoaking the ship MUST perform either a Barrel Roll using the 2 Ahead or execute a 2 Ahead.

Go on, take another look at the maneuver dial, I will wait.

That’s right, you can do anything from burst forward 8 ship lengths, to shuffle to the side 4 ship lengths whilst maintaining your heading and advancing less than 2 ship lengths forward.  That range of movement is unprecedented, even Vader with an engine upgrade can’t do things like that. (OK, so he can go 8 forward but not the sideways thingy.)

If that was not enough you do actually get some upgrade cards in the pack as well, you get to take advantage of the system upgrade slot with the Fire Control System card for 2 points which lets you acquire a target lock after performing an attack, not bad, everyone loves having a 4 dice target lock’ed and focused attack right?

You also get two crew cards to take advantage of the crew upgrade, the ever popular recon-specialist for 3 points lets you generate an additional focus token, whilst the new Tactician card adds stress tokens to your target if you are at range band 2 and costs 2 points.

To round out the pack you have 2 Modification cards in there as well which are (currently) Phantom specific.

The cheaper of the two, Stygium Particle Accelerator costs 2 squad points and allows you to have a free evade action when either cloaking or decloaking.

The stand out choice for me has to be the Advanced Cloaking Device for 4 squad points though. This card allows you to cloak after performing an attack bumping your evade back up to 4.

Quickly covering the Named pilots before I give you a sample list of what I will be fielding in my first few games.

The Named pilots give you your only access to Pilot Skill upgrades and add some fun abilities to the force.

Going against the grain a little if I were only fielding one Phantom in a list I think that I would go for Whisper as the extra focus after attacking, coupled with an Advanced Cloaking Device should keep him alive longer.

Echo on the other hand is where all the talk is at the moment, and its easy to see why.  The pure amount of variation that his ability allows in his movement can just mess with your own head never mind your opponents.

As you can see it gets extremely difficult to predict his position when barrel rolls and maneuvers are taken in to account, and this isn’t even all of the possibilities from just decloak, hard turn 1 and a barrel roll.

Now this is my kind of ship as I love the bluffing and double bluff aspect of the game!

This is the kind of 3 ship list that Rebel players will be used to but it has not been available to the Imperials outside of the named Interceptor lists that did the rounds with the Aces release and Wave 3.  Whilst this list still has the same weakness of the 3 ship Interceptor list, i.e. your ships can get 1 shotted if the dice don’t fall for you and once one has gone down it becomes a struggle, I think the shear psychological warfare you can bring to the table will make this list a lot more survivable, not to mention fun.

The list relies on out flying your opponent and not giving his higher pilot skill pilots the chance to even shoot you whilst you focus down the lower skills pilots first.

Intelligence Agent is vital to how this list works as it lets you look at the dials of the ships that are going to be shooting before you and take advantage to the Phantoms Decloak move to be out of their fire arch.  The Advanced Cloaking Devices allow you to keep up this silly amount of maneuverability by cloaking after every shot so that you can rinse and repeat.

Thanks for reading guys and check back at The Dice Hate Me for some more chatter about various games. – Kris

Who is it to be guys and girls, Echo or Whisper?  Are Phantoms the new Black or are you too excited to field the TIE Defender with its Cannon upgrade on a fighter platform?