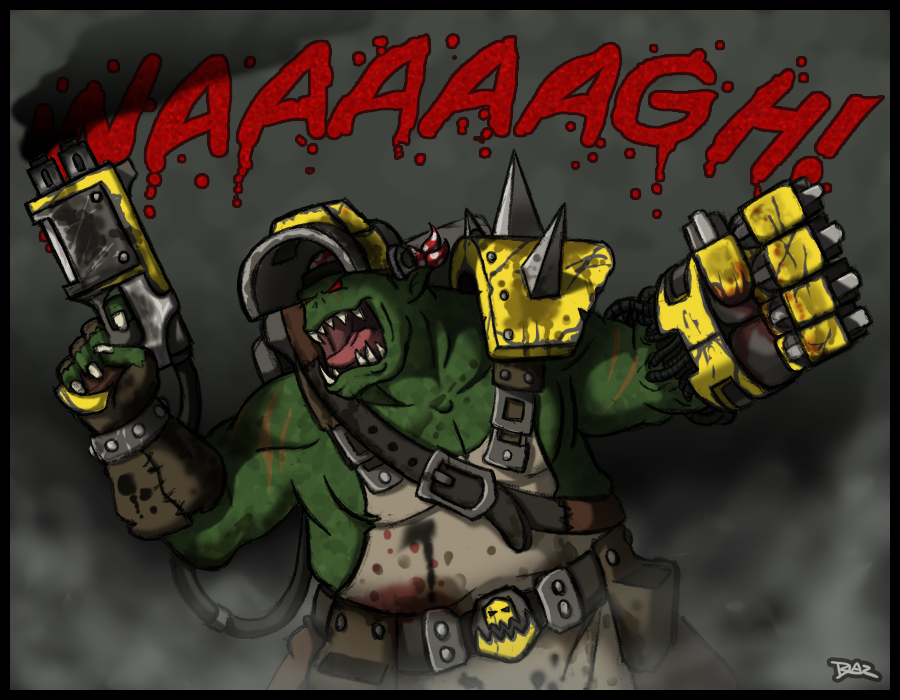 Advertisement
Reecius here to give you the low-down on The Red Waaagh’s cool new Formations!  There is some AWESOME stuff in there!

The Red WAAAGH! is a campaign supplement for 40K. There are several interesting formations in it that we wanted to review. As always, check out the Tactics Corner for more great reviews!

The supplement itself expands on the Grukk Facerippa narrative that began in the Ork Codex. The supplement is pretty cool, it develops a fun story between the Orks and Imperium (mostly focusing on Astra Militarum, Knights and Scions in this book) in an ongoing, major conflict. There is a lot of good content in there for missions, scenarios, etc. Also, there is some awesome artwork in the book, too!
For most players, beyond the fluff, the big draw will be the Formations that are presented as these will be the most commonly used elements of it. There are some nasty Formations in there! Adamantine Lance
The first Formation, and probably most powerful, is the Adamantine Lance. It consists of 3 Knights (Paladins or Errants). Their special rule is that so long as a Knight is within 3″ of another Knight in the Formation, they can reroll their Ion Shield saves, reroll their charge distance and get D3 HoW hits. WOW. That is–obviously–extremely good. Going from a 50% chance of deflecting a hit to 75% is a massive boost in durability to an already durable unit. The only downside, at all, is that it forces them to stay close to one another. But, if you they do need to break apart to go after different targets, oh well, each of them is still a Knight! If you are taking 3 Knights, there is no reason not to use this Formation.
The obvious counter to this Formation is to try and force them to split apart to lose their benefit. A 3″ radius is pretty unforgiving. The Steel Host
Another GREAT Formation. I love Leman Russes, and have 9 of them in my Astra Militarum army. Unsurprisingly, a Formation that revolves around those tanks will appeal to me, on a personal level.
The Formation consists of a Tank Commander, 3 squadrons of Leman Russes and a Hydra. The Hydra is not all that appealing, but, it is not bad, either. A little AA in your list is something you should have anyway, and this covers that role. The big benefit though, is that any vehicle within 12″ of the Tank Commander get Preferred Enemy! Boo-Yah! That is fantastic. 12″ is a nice healthy radius, too, and gives you some room to maneuver.
Obvious choices to go in this formation are the Punisher whose high volume of shots really gives you mileage on Preferred Enemy, and the Executioner where it allows you to reroll Gets Hot! rolls, which is critical to keeping the damned thing from committing suicide. The rerolls of 1 to wound also mean that you will in most cases wound every model you hit. Vanquishers are also a good choice here as Preferred Enemy makes their single shot much more reliable.
You may still want to take a generic pie thrower such as a stock Russ or Demolisher, or the excellent and cheap Eradicator as even with 12″ range on the Preferred Enemy bubble, you can find yourself getting crowded with 4 Russes. These units don’t need Preferred Enemy, but benefit from it when they do get it freeing them up to act with greater independence than an Executioner or Punisher would.
In all, this is an excellent Formation and if you like Russes and want to take lots of them, there is no reason to not take this Formation. I will certainly be giving it a shot! Rampart Detachment
Another winner! The Formation consists of 1 Platoon Command Squad and 2 units of 5+ Bullgryn. The reason this Formation is so solid is because of the incredibly awesome Fearless rule. All members of the Formation gain Fearless, Fear, and Counter-attack (which no longer requires a Ld check to pass). That is incredible for low leadership Bullgryn as it means they no longer need a babysitter. Ogryn and Bullgryn got much better this edition due to Smash getting nerfed. That means the amount of strength 10 attacks floating around has gone way down, making an investment in expensive multi-wound models much, much safer. With Counter-attack and Fearless, this Formation provides you with ultra-reliable assault or counter assault units. As a nice little bonus, fear can really help win a fight and any friendly infantry units that are partially obscured by models from the Formation get +1 to their cover save, which is cool. Even the PCS has this which is funny. It also means they can give the benefit to one another.
I like this Formation quite a bit. I would take with 2 minimum sized units of Bullgryns with Mauls and most likely attach a Priest to each unit for Hatred and War Hymns. That creates 2 nasty units that can put a beating on most targets, particularly if they get their War Hymn off. The PCS I would equip with 4 Flamers or Grenade Launchers and either play them aggressively as a throw away unit, or hide them if I was worried about giving up First Blood too easily. In all, this is a solid Formation if a little pricey. Gorkanaut Krushin Krew
This Formation consists of 3 Gorkanauts which get a special rule corresponding to the turn number. They start with nothing, and from there get Furious Charge turn 2, that plus Hatred Turn 3, and both plus Shred Turn 4+.
Not bad. The bonus is nice, and Gorkanauts do hit hard, but, I am simply not sold on them. They really should have been Super Heavy Walkers like a Knight, IMO, and they would have been stellar. As is though, they are very pricey and can die from a single shot weapon. They will pack a wallop but this is a big points investment that can evaporate on the first turn of shooting before they do anything. I would give this a meh, unless you had your heart set on playing multiple Nauts, in which case, why not use it?
Mogrok’s Bossboyz
I like this Formation! Orks badly need more HQ slots, and this gives it to them. Now, it may not be the HQs you wanted exactly, and it forces you to take Mogrok as your Warlord (Big Mek with the Kunnin’ But Brutal Warlord Trait) which is a bit of a bummer as it means no WAAGH! but the extra HQs is really good for Orks. The Formation consists of 3 Big Meks (one of which is Mogrok), a Warboss and a level 2 Weirdboy. Your special rules are slick, D3 Ork units get Acute Senses and Outflank during deployment. Nice! That is a really cool benefit that creates a ton of flexibility to deal with changing situations you find yourself facing due to deployment, opponent, going first or second, etc. That means you can Outflank a giant unit of Boyz or a ‘Naut, or whatever you want. Combine that with Kommandos, Buggies, etc. and you can make a really cool reserving beta strike list! Don’t forget that Ourflank is conferred onot a dedicated transport, too, so that can get fun with Battlewagons.
The Formation also gives you +1 to Seize the Initiative. Nice! Combo that with Da Finkin Kap and try to get the Strategic Trait that also gives you a +1 to Seize and rerolling reserve rolls and you have a winner!
This Formation allow you to do a lot. You can go Battlewagons and give each a KFF, or sprinkle the Big Meks around in units of Boyz to do the same thing. You can kit them up to fight and join them all together to form a mini-deathstar, you can give them all Shokk Attack Guns and form a little artillery unit, etc. It gives you a ton of flexibility. You can toss in the HQ from another detachment too, like a Painboy for even more flexibility. You can opt to not kit out the ICs in this Formation to keep them cheap, too, and that extra Ld on the Meks can really help units of Boyz to not kill themselves with Mob Rule.
In general, this Formation gives you a lot of options at the price of a WAAGH! I think that is a fair trade, plus it forces you to take a Weirdboy, which some players will balk at, but the Ork psychic powers are all actually really good plus he packs a Force Weapon which can come in very handy.
In all, these are some fun, effective Formations that add a lot to any army that opts to take them.