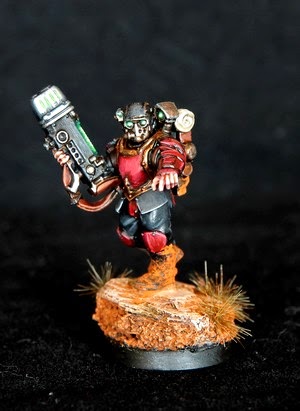 Hey Folks! NoName1 here again to cover that itching, driving need to start a new army – especially with new Codices and campaign books flying at us non-stop!
We’ve all had it (any of us who’ve been at this for a while anyway) that gorgeous army you’ve poured your heart and soul into is completed. It looks amazing. It’s a testament to your passion, dedication, enthusiasm, and mathhammer mojo. It’s given you some great moments on the tabletop, and you’re proud of it.

But then, all of a sudden, you hit a wall. You’re not excited about any other models, you’re running out of list combinations to try, and there won’t be any new rules for your army (or armies) a few years.

That’s the moment where another army (especially one very different from your own) starts to look impossibly appealing.

For me, that time is nigh! And that army that’s different from my own, is an Imperium army. Specifically, Militarum Tempestus.

Why? I like elite armies, can’t stand throwaway “Blob” units (a staple of IG/AM), and admire the Storm Troopers for their skill and zeal. Plus, holy crap, have you seen those models?

Once I started looking into them for the models (got me there, GW, well played), the rules started looking awfully good too, so I picked up the (laughably tiny) Codex. That’s another draw of MT: the Codex has all of five unit entries. FIVE. That’s not a lot of variety, but it makes it *very* easy to pick up the book at make some lists.

The first thing I saw (and still one of my favorite things) is the Aerial Assault Formation. Which is four Valkyries, a Lord Commissar, a Command Squad, and three units of good ol’ Scions (Troopers) all in one big flying wall that:

1. Re-rolls reserve rolls (pass or fail, nice perk there), one roll four all four Valkyries
2. Gives all infantry Split-Fire and Twin-Linked on the turn they disembark
3. Re-roll scatter dice if a Grav-Chute drop goes badly

Plus (and this is possibly my favorite part), there is simply no better occasion to play that “Ride of the Valkyries” clip I’m sure most of us have on our phones. All you need to tack on to that Formation to make a complete army is at least one more HQ and two Troops units. Since I also love the Taurox (glass though it may be), it’s an easy fit finding things to spend points on. It’s also well worth it to take a second Command Squad as another HQ to get the most out of those Orders.

Another draw here is the boxed set. I have to give GW more major props for putting together bundles that actually have built-in savings as opposed to those stupid “one-click collections” that were just a pre-filled shopping cart.

The Militarum Tempestus boxed set is (for those who haven’t seen it) the “Storm Scions” box. It comes with forty Scions (four boxes), a Scion Command Squad, Lord Commissar, Valkyrie, and two Tauroxes.

The full box rolls in at $285. Those same kits individually are a whopping $359. So the box right away is $74 off if those are the units you want.

For the lists I’ve been hammering out, I would want two boxes. And I would order them from one of my local distributors for that 20% off deal. All of that means that I would be getting $718 worth of models for $456, an overall savings of $262 (less shipping).

That’s still a big chunk of change, but for a whole army all at once, it’s not bad at all.

I’m only sharing all of that because I just ran the numbers myself, and was a little bit shocked at how good it came out!

Now for my purposes, I’d have an extra Commissar and two extra Tauroxes, plus I’d probably be short a box of Scions and two Valkyries. I’m guessing I could sell/trade the extra pieces for, at minimum, most of the cost of another Valkyrie, and I could just pick up the other one by itself. Done!

That’s enough out of me. If you’re looking at (or starting to) put together a new army, battle force, strike team, what have you – what are you thinking about?

Author: Noah Hallett
Noah is a tabletop wargamer with a decade of experience. His specialty is Warhammer 40,000. He began writing for BoLS in 2014.
Advertisement
Astra Militarum Miniatures Warhammer 40k
Advertisement