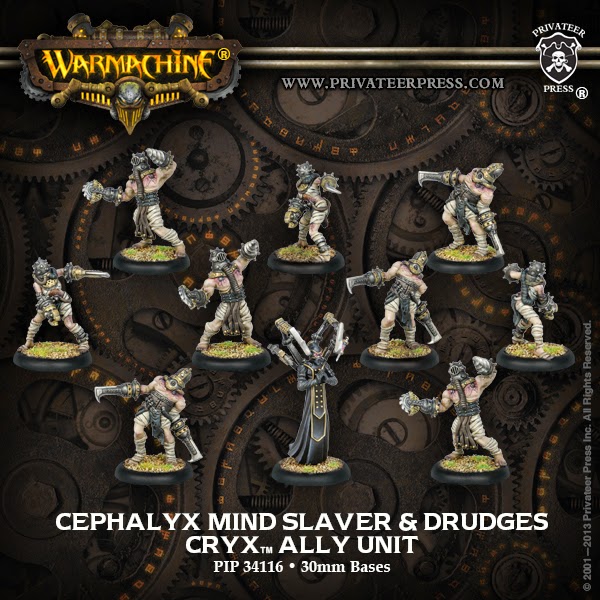 With the plastic re-release of the Mind Slavers and Drudges, it’s a great time for a closer look at this unusual unit.

If you have even a passing interest in Warmachine you’ll no doubt be aware that this is an exciting time for the Cephalyx. It’s hard to believe these guys first showed up on the tabletop seven years ago, and of course long before that in the IKRPG. While they saw a little bit of use in MkI, their rules were almost universally derided by Cryx players in MkII. Tough just wasn’t enough to make them shine over Mechanithralls who are not only cheaper, but get an extra attack. The Blood Witches also compete in the same points slot, and the tactical advantage of their Blood Hag UA wins out over the Drudges almost every time. Meanwhile, we Merc players kept a hopeful eye to that little line about “these models may be taken in a merc contract…” and did our best to keep ourselves occupied with other fun toys like Galleons and Earthbreakers. Would we ever get to run these guys?

Well our time is here. With the arrival of Exulon Thexus we can field more Cephalyx than you can shake a stick at. Thexus is such a good caster, we’d happily take the Slaver and Drudges with him even if they had nothing else new going for them. But with other new new Cephalyx offerings, Slaver led Drudges will be hitting like a laser guided ton of bricks.

With Adrenal Flood from a Mind Bender and Instigate from an Agitator, a Drudge will swing at MAT 11 with P+S 19. Drudges buffed this way can lead a Combined Melee Attack with other Drudges regardless of whether they’ve received the Adrenal Flood buff. You only need one more to get that total up to a MAT 13 P+S 21. Adrenal Flood will also give the Drudge an immediate 4″ Advance – great not only for the extra speed, but also for the possibility of revealing new charge lanes. The downside is that it will be difficult for an Agitator and any CMA buddies to keep up with these fast moving Drudges. Proper coordination between Agitators and Drudges/Monstrosities will be one of the key challenges to any Cephalyx player. Because Instigate is an aura, not a pulse, it’s all too easy for you to set up a devastating attack only to find a key model has charged out of the Instigate aura.

If you wish you can run Thexus’ Tier list instead of the Puppet Masters contract allowing you to deploy any Mind Slaver and Drudge units you take with Ambush. In Warmachine, scenarios are tremendously important, and flexibility in deployment can never be underestimated. Of course you could also look at it as 20 models coming in where your opponent is at their most vulnerable. Pretty cool no matter how you slice it.

So I guess what I’m trying to say is suck it Cryx! In the end, Mercs win Cephalyx. Not you.

Or do they? While I think Merc players are going to be the ones running the most Cephalyx, there are two Cryx Tier lists that can bring a strong Cephalyx game. That’s right I said two. I know this first one is going to be contentious. I don’t even think I would be mentioning it if I hadn’t seen it’s potential with my own eyes. You guessed it. I’m talking about Asphyxious 2’s tier list Dark Alliance. One of our better local Cryx players won a couple of tournaments with this theme. It’s been a year or so, and I’m not quite sure of the list he used but I think it went something like:

The reason for this list is twofold. First, when granted Advance Deployment, Mind Slaver and Drudge units suddenly become quite the deal for 4/6 points. Putting them up the field lets them get in there and start jamming things up early. Then Tier 3 lets you redeploy a unit after everything else is in place. Since three of the main elements of this army have Advance Deployment, that’s up to four things you can place after seeing most of your opponent’s setup. The free Overlord Unit is just the icing on the cake.

Yes I know there are no Bile Thralls allowed in the Tier, and Gaspy 2 just loves those little buggers. But seriously, everyone knows about that trick now. A lot of people in a tournament setting will have a list to drop that is tailored specifically against Bile Excarnate shenanigans Even if you’re not with me on Gaspy 2 and Cephalyx, I think everyone will agree that Deneghra 2’s Body and Soul Tier is one of the scariest you’re likely to find.

Man that is a lot of bodies… The same basic principles at work in Dark Alliance apply here. Cephalyx with AD are already good, and now they are even cheaper. I also love Overlords with Deneghra 2 already since they can wipe up so much infantry on her feat turn. Given the point reduction they get I would probably find a way to squeeze in another unit, but they are only FA 2. Regardless, all these Cephalyx are really only here to get Dirty Dee on her way up to Tier 4 where she can actually toss her upkeeps out onto enemy models for free before the game even begins. She has to pick her targets before deployment and she can’t target enemy casters, but man – that is still ridiculously good. Makes me wonder why I even bothered with the arc node.

~Hope you enjoyed the article. If you have a favorite use for Cephalyx put it in the comments.