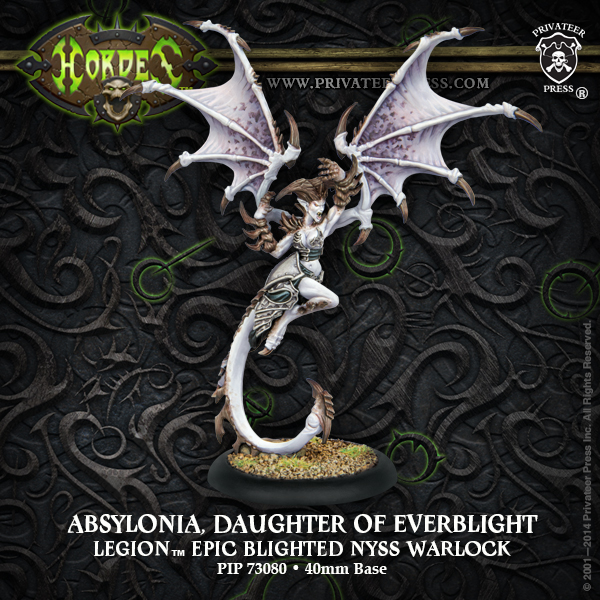 If you were having trouble with armor don’t worry, the can opener is here.  Like a cliché Nike commercial Epic Abs makes her beasts work harder, faster, and stronger.

Epic Abs is a very straightforward warlock, literally.  There is no admonition , no running away, her army is coming and it could be from downtown if you let her.

Epic Abs Abilities:
-Conferred Rage: If your battlegroup model starts in her control free charge and power attacks.  That is 1 more fury you can use to open the stormwalls of the world up with. If Abs kills a model your battlegroup gets SPD and MAT buff.  MAT 8 legion beasts are very scary and even high defense models are not safe.
-Flight:  No surprises here
-Stinger:  Her tail attack has energy siphon…It is a tricky to use with her.  Since it is on her lowest power attack it is a hard trade off to buy more attacks with.  Also, Abs is only MAT7 so she may need to boost to hit some higher defense models.  She doesn’t get the MAT buff that she confers to her beasts through Conferred Rage.  If you could engineer a knockdown on an enemy caster it could be interesting to use abby to remove all the focus from them and a beast to finish them off.
Epic Abs Spells + Feat:
Fortify:  This is pretty rude when combined with the Carni’s spiny Growth.  Having a 22 + armor beast floating around can be a big problem for lists.
Psycho Surgery:  This can be great if multiple of your beasts are hurting.  Some of the net lists have thrown around the idea of stinger spam combo’d with this spell to bring back points in the stingers bodies after they have swung.
Return Fire: If you are going to burn fury anyways, you might as well cast this.  Some of the more intriguing ideas with Aby2 have been heavy Ravagore.  Not sure if you can catch a good player out with this spell.  But, they might not have a choice.
Teleport:  Old school cool.  Same as Gatsby1 and Caine1 , when she is done wrecking something she is going to shoot back 8” out of danger.  Great spell for scenario domination as well.
FEAT:  Reach, Flight, +2 STR… It makes your battle group insane.  Combine with Conferred Rage there are few models that you can’t take down.
Epic Abs Ideas:
As I already mentioned there are already a few ideas for Aby2. All the Ravagores! Abs makes beasts better.  Alone Ravagore are merely shooting platforms.  Combined with Abs abilities she makes a rather poor melee heavy into almost a respectable one.  Get the best of both worlds, shooting and for 1 turn; decent melee.
Light Spam:  Stingers everywhere!  Not that great vs warjacks, but always a threat to casters.  2 or 3 Poison Stingers can be a big threat to casters that are not full camp.
Take a Carnivean for its Animus.  The Carni really shines with Aby2 in my opinion.  Fortify and Spiny are a great combo.  Mat 8 makes that bite pretty accurate and the feat makes it super down town threat.  Throw in a slipstream and we are talking major downtown long bomb threats.
Against Aby2:
Self Sacrifice can really ruin Epic Abs.  Errants prevent her from getting conferred rage and that makes her beasts a lot less cool.
Admonition is good way to keep your heavies safe.  Most of Aby list will be beast heavy and have a hard time preventing admonition moves.
ALPHA.  If you are as fast as Aby2 and can take out a heavy or 2 you can gain the upper hand.  Aby by herself doesn’t hit that hard and barring an ARM22 carnivean running around you will have an advantage.
So BOLS are you ready for the daughter of everblight coming your way?  Have any good ideas that we didn’t mention.  Please post your comments below. I will be at Feast of Blades if you want to talk more of some Exigence releases! Check out my twitter at @revenanttx I am going to start using it I promise.

Author: Revenant
Revenant is a veteran tabletop wargamer with over 10 years of experience. His specialty is Privateer Press' Warmachine & Hordes gamesystem. He began writing for BoLS in 2009.
Advertisement
Legion of Everblight Review Tactics Warmachine-Hordes
Advertisement 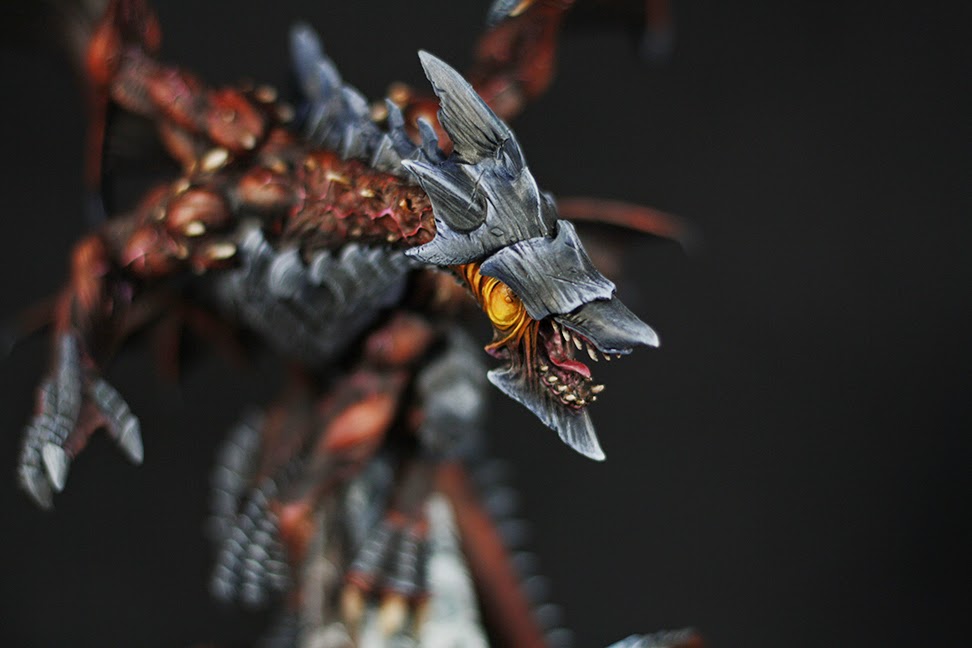