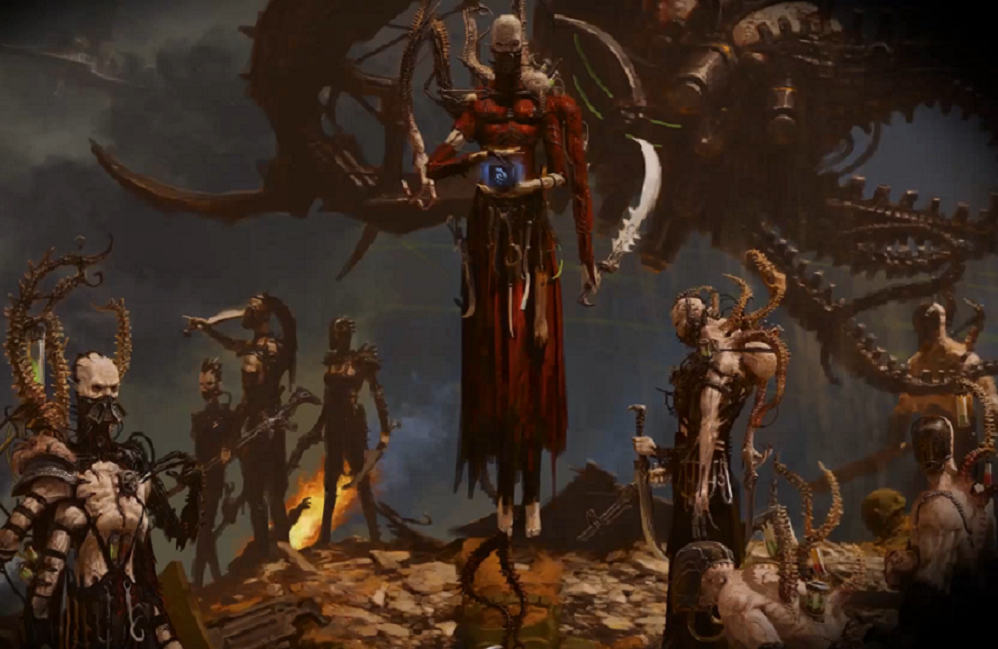 Doctor Z here from Doctor Z’s Laboratory with the second part of my Dark Eldar coverage. Today we take a look at some of the more interesting entries in the new Dark Eldar Codex.
In part one of this column I discussed a few of my opinions as to how Dark Eldar where different from other armies as well as how they are best played. In part 2 we’re instead going to take a look at some of the standout units and items in the new codex. Again for the purposes of this article we’re looking at just the Dark Eldar Codex and not the Covens Supplement We’ll save that for later.
The Good Units
So here in no particular order are some of the units I find myself gravitating toward in the new book. Not to be confused with the Razorwing Flock. This thing has been good for a while but nobody noticed because it shared a force organization slot with the Ravager which you were basically obligated to run three of. No more. The move to fast attack coupled with the change to the way missiles work in 7th edition means that this thing is a real threat.  You can bring it on from reserves and fire four large blasts that will pummel all but the heaviest of infantry in one turn. I’ve heard arguments for all the weapon options and frankly I think they’re all pretty good. With the upgrade from a twin linked splinter rifle to a splinter cannon the Razorwing poses a threat to flying monstrous creatures. Disintegrators have good synergy with the missiles while the upgrade to Dark Lances can add much needed anti armor power to a list. If you don’t mind spending the points the Shatterfield missiles are by far the best as S7 with Shred means that they can be effective against almost any target including vehicles. The biggest downside to the Razorwing is the fact that it can’t start the game on the table.  Dark Eldar work best as an alpha strike army and and fliers are incapable of contributing before turn 2. That means you could easily find yourself in a situation where you are going 2nd and most of your other (very fragile) units have already been wiped out by 2 turns of enemy shooting before these ever hit the table.  I personally have been running mine with Dark Lances, Monosythe Missiles, and twin linked Splinter Rifles just to keep them cheap. Keep in mind with the Real Space Raiders Detachment you can run 6 of these and it takes less than half your points at 1850. It’s a gamble but it’s scary.

So they lost their fly over attacks, and they are pretty average in close combat. Why are we running these? They’re cheap. All around the internet I see people writing lists with units of 9 or 12 Reavers that come out to about the same points cost as a Land Raider. I’m thinking this is another case of people trying to apply the strategies they’ve learned with other armies to Dark Eldar. Big units of these are going to draw a lot of fire in early turns and if any of that fire ignores cover (Wave Serpents, Thunderfires, Wyverns, the whole Tau army) they’re as good as dead.  Units of 3 or 6 bikes will be much more survivable and can do just as much damage. I’d give each unit either a blaster (my preference) or heat lance and run around the table collecting maelstrom points and taking pot shots at vehicles. Don’t forget that they can move 2d6 in the assault phase, so you can fire your Blaster from on top of a rock and then go hide behind it. Another neat trick you can pull with Reavers is to block off your enemies movement, this works particularly well against Knights. Just spread your bikes out as wide as you can and turbo boost in a line to exactly 1” way. Your opponent either has to go around you and waist movement or spend his knights turn charging into your cheap chaff unit buying you an extra turn to shoot it. You can also apply this tactic to Land Raiders, Thuunderwolf Cavalry, Bike stars, and any similarly scary units that can’t simply jump over them. People hate it. I’ll be honest I’m only half sold on the bird men. The good news is that they are point for point the best Anti armor in a book that can at times struggle with armor. Okay, I’m about to drop some mathhammer on you. A unit of four Scourges with Haywire Blasters will strip 2.222 hull points before saves off of any vehicle. By comparison a Ravager with 3 dark lances (roughly the same points) will do 1 against AV 12 or better, that number gets better for the Ravager against lower armor values but it never gets close to the Scourges. The trouble is that the five T3, 4+SV wounds the scourges have actually makes the AV11 Ravager standing next to them look tough. As jump infantry you can deep strike them and I’ve heard people talk about doing this with 4 Heat Lances for what is potentially an even more devastating punch. In my opinion this is just too inconsistent. Heat Lances only have an effective range of 9” against armor, (and if you’re not shooting armor than why take a melta weapon) once you give the target unit its 1” clearance and factor in the size of the unit you’ve really only got about a 7” window to drop them in. Your odds of success are probably a little better than 50/50. “But what about the Webway Portal” you say. It’s an option but now you’re taking a suicide unit and sticking a character in it that costs as much as the unit and they’re still all going to die. To me the Haywire blaster is just more reliable; as it lets you use cover and lines of sight to try to protect your models. If you do decide to deep strike them the added range makes deviation less of a problem. I say this is a judgment call some players will love one others will love the other. The only thing I can say for sure is that the weapon bits will be hard to find online. The box only comes with 1 of each!

Not much changed. Enough said.

The much maligned mandrake has gotten a needed overhaul. They still aren’t going to be killing all that much, but taking 3 small units gives you cheap effective objective holders that due to stealth and shrouding will have a 2+ cover save in any terrain. Yeah, they are going to die if your opponent can ignore cover but that’s true of pretty much everything in this army. I’ve been writing a lot of lists that reserve most of the army with the hope that not coming on until turn to will help to maximize the benefits of the power through pain special rule as well as the fliers. 3 minimum sized squads of mandrakes have found their way into every one of those lists as a “hide and don’t get tabled turn one” unit. I know you’ve already heard a lot about this but since everyone else has told you their opinion I thought I’d through my hat into the ring as well. I hate to say it but there’s not much you can do with these using just the Dark Eldar Codex. I know people are excited about deep striking grotesque death stars, units of 4-10 Medusae, and Heat Lance Scourges/ Reavers  and I’m not saying any of that is bad, although some of it probably is. It’s just the stuff you can do with Eldar is better. Yep, the rest of this paragraph is going to involve allies so purists should just skip down to the next one. You can put an Archon in a unit of 10 Fire Dragons in a Wave Serpent and deep strike the whole thing Serpent and all next to anything you want get the Dragons out and unload all the weapons in both units without having to snap fire a thing! The other one people like are D Scythe Wraithguard I’m not saying that this is bad but something to bear in mind is that when you deep strike down your guys are going all bunched up in a circle and you’ll likely only be able to place about three of those templates without hitting your own models (which you can’t do). If you do decide to do this you need the wave serpent as well so you can disembark and spread out. My “Webway Portal Buddy” Eldar ally detachment of choice at the moment is a Spirit Seer, five D Cannon Wraithguard with a Wave Serpent (just as a gun platform) as troops and Seven Fire Dragons with a Wave Serpent of their own. it gives me needed anti armor power versus Wave Serpents and Knights

Pretty much all of the lists I’ve been writing with the new codex have used this detachment. Yes, you lose objective secured. No the special rules are not all that good.
BUT 6 FAST ATTACK!
Take another look at the above list 4 out of 5 of the above units can be found in the fast attack section of the book. I can’t help but think it’s worth giving up one (admittedly good) special rule to make sure I can take all the best units in my codex. I’m not telling you that every good Dark Eldar build will use this detachment , but don’t be afraid to run without  objective secured.

Did I skip your favorite unit? Do you feel naked without objective secured?