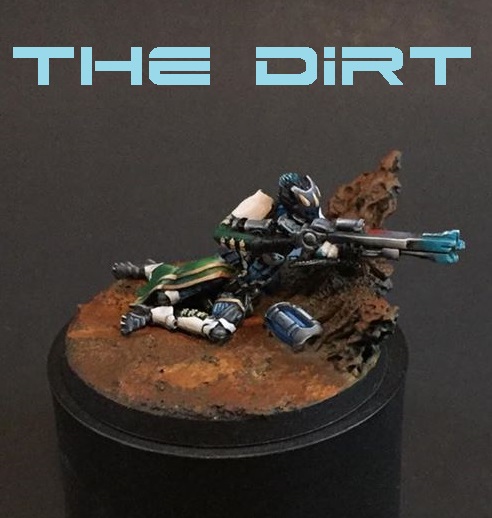 The continued destruction of the Tohaa in a player’s first turn will continue in this article.  Photo by Ethan Pearson.

If you want all the tips and strategies for dealing with the Tohaa, please see the first part of this article.

The News – Part 2 of the Batrep

When last we left El Jefe (Guija TAG), he was sitting on the mountain, having spent 4 orders, and unfortunately dealing with two wounds.  It’s about at this point that we realize we need to find 3 points to squeeze a ghost:servant for the engineer in this list. 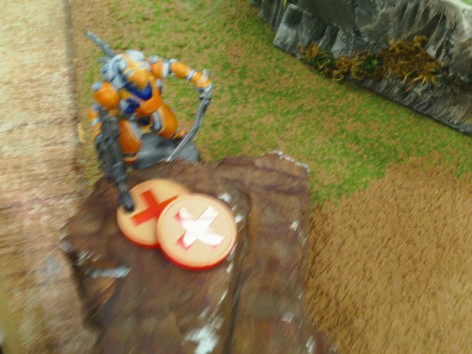 Order #5 – Guija TAG moves just slightly to its right, Tohaa opens fire with the HMG Ectros, El Jefe fires back.  Now that the TAG gets cover and a good roll, the Ectros is hit four times.

The ectros fails 3 armor saves, is removed from play and the fireteam link is broken.

Order #6 – El Jefe walks back down the hill as his first action.  The Clipsos waiting on the hill realize that he’s in heavy flamer range and delays.  Yu Jing Ends their order there. 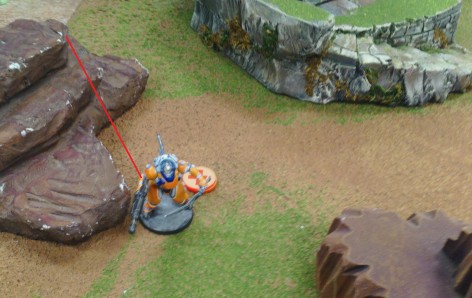 Order #7 – El Jefe moves into attack the Gao Rael Spitfire, going just far enough to pull him out of cover.  The Clipso materializes to fire at the Guija TAG as well as the inactive symbiant armored Gao Rael.  El Jefe splits his fire, 2 on each.

The results: The Gao Rael is taken out with a critical hit.  The clipsos hits El Jefe who makes his armor save.  The fire team with the Gao Rael Spitfire is now down.

Order #8 – El Jefe, feeling brave from saving the clipsos’ shot marches forward to flame template the clipsos.  The clipsos fires back with her combi rifle.  El Jefe is hit, but again makes an armor save.  The clipsos is hit, destroying the TO Camouflage, but makes her armor save.  Failing her guts check, the clipsos moves back on the hill until her prone state keeps her in total cover from El Jefe.

Lt. Order – Strategos Level 3 – El Jefe moves forward but out of range of the Sakiel who he shot at and is prone.  The Kameal and Gao Rael attempt to change-face/dodge the flame template.  Both Tohaa fail their rolls.  The Kameal successfully saves, the Gao-Rael does not.  Since he has Symbiant armor on, his failed armor save means he dies.

The Skinny – Results of the Batrep

Clearly the Yu Jing had an amazing first turn dealing with the Tohaa.  What you witnessed is exactly WHY tohaa will almost ALWAYS want to go first, they pack a mean punch but they also have weaknesses that can be exploited.

At the end of the first player round, yu jing had their TAG take two wounds.  Tohaa lost nearly all of their SWC, all of their link teams are in disarray, and their clipsos has not TO camouflage.  Thankfully their Lt was not killed, but it was the Kamael who was hit with the flame template. 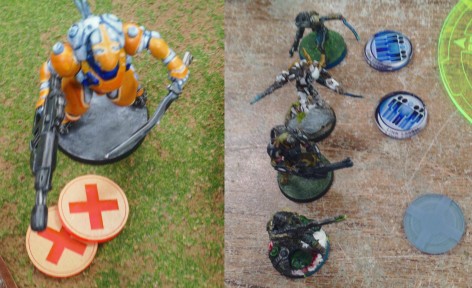 Now will Tohaa opponents always be this successful?  No of course not.  But hopefully this give you just more options in your strategy belt to use in the future.  Curious, I thought of how the Tohaa would respond.  The first thing was to walk Aelis Kessen around the other side of the hill and shoot EL Jefe in the back with k1 ammo…. El Jefe bit the dust in the first two Tohaa orders, but the damage he inflicted was severe.

The DiRT – Shooting The Bull ( a Dire States Event in Durham, NC )

April 25th, 2015 is responsible for two Dire States Events.  For the uninitiated, I will explain.  In Infinity, there are tournaments and then there are multi-state gatherings that often have the label “Dire States”.  Unfortunately as there are two on the same day, I will not be able to attend both.  I will be attending Shooting the Bull in Durham, NC.  I really hope we get a huge turn out for this event.  There is a ton of prize support for this event.  Even my YouTube Channel is partially sponsoring.  For more details about Shooting the Bull (as in Bull Durham), check out Facebook or the Atomic Empire Forums for more details.  As an added incentive, those who wish to stay through Sunday will get a chance to experience Infinity:Zero…

Infinity: Zero is a multi-player game using the rules from Infinity the game by Corvus Belli. It is styled after classic first person shooter death-match games where every player is in a free for all against one another or small teams fighting to reach the target kill counts through a series of rounds. Players control one model utilizing the Authorized Bounty Hunter stat-line and spawn with a weapon or piece of equipment by rolling on the booty level 1 or level 2 tables during deployment. During play players try to outwit, maneuver, forge and break alliances to be the first player to reach the kill-count for that round.

Prizes are awarded to top players for kill count at the end of each round and throughout each round for various events like: multiple-kills, criticals, killing streaks, etc.

The other event on April 25th is Battle for Empire State in East Greenbush, New York.  Details can be found on the Facebook page. 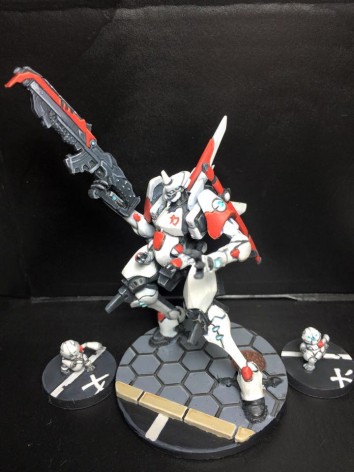 Yu Jing O-Yoroi and KrazyKoalas by Tommy Back.

So that’s the the news, the skinny, and the dirt of dealing with the Tohaa.  Up next, we will conclude the Yu Jing/Tohaa Battle report and start walking through the N3 rule book.  If you take a photo of your game right after deployment and want to know what strategies to use against an enemy, drop me a line and send me the photo.  I can’t promise success, only unnatural crits can do that.  But I will provide any thoughts I can add in a future article..  As always, you can find me here, on Facebook, or on YouTube.

Author: doremicom
Doremicom has been a tabletop wargamer for over a decade. His area of expertise is Corvus Belli's Infinity: The Miniatures Game. He began writing for BoLS in 2015.
Advertisement
Infinity The Game Tactics
Advertisement 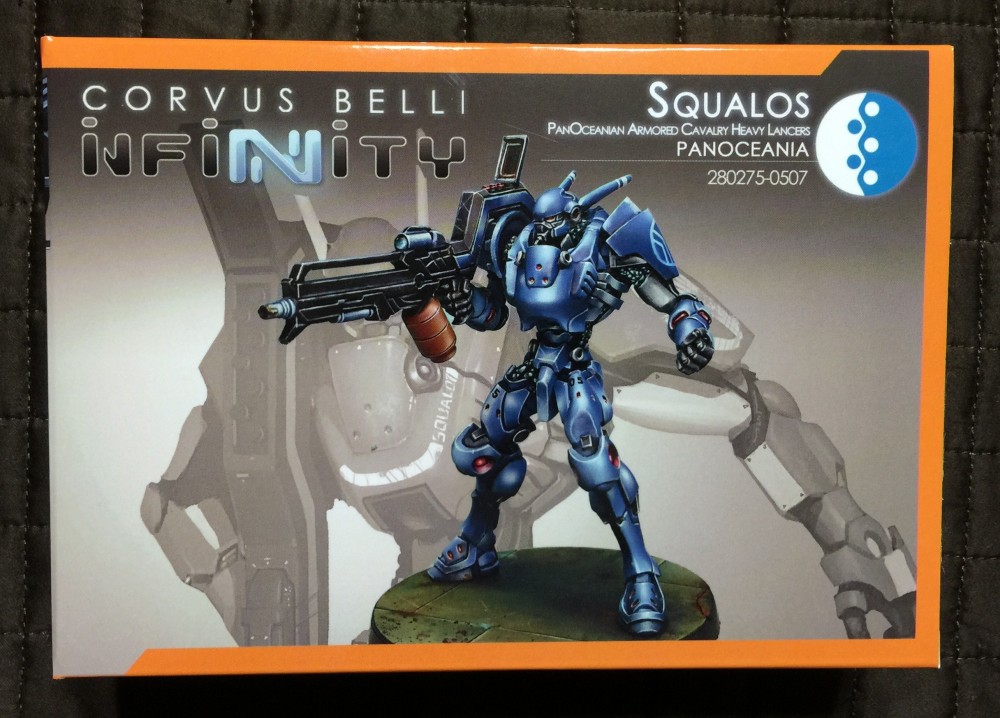