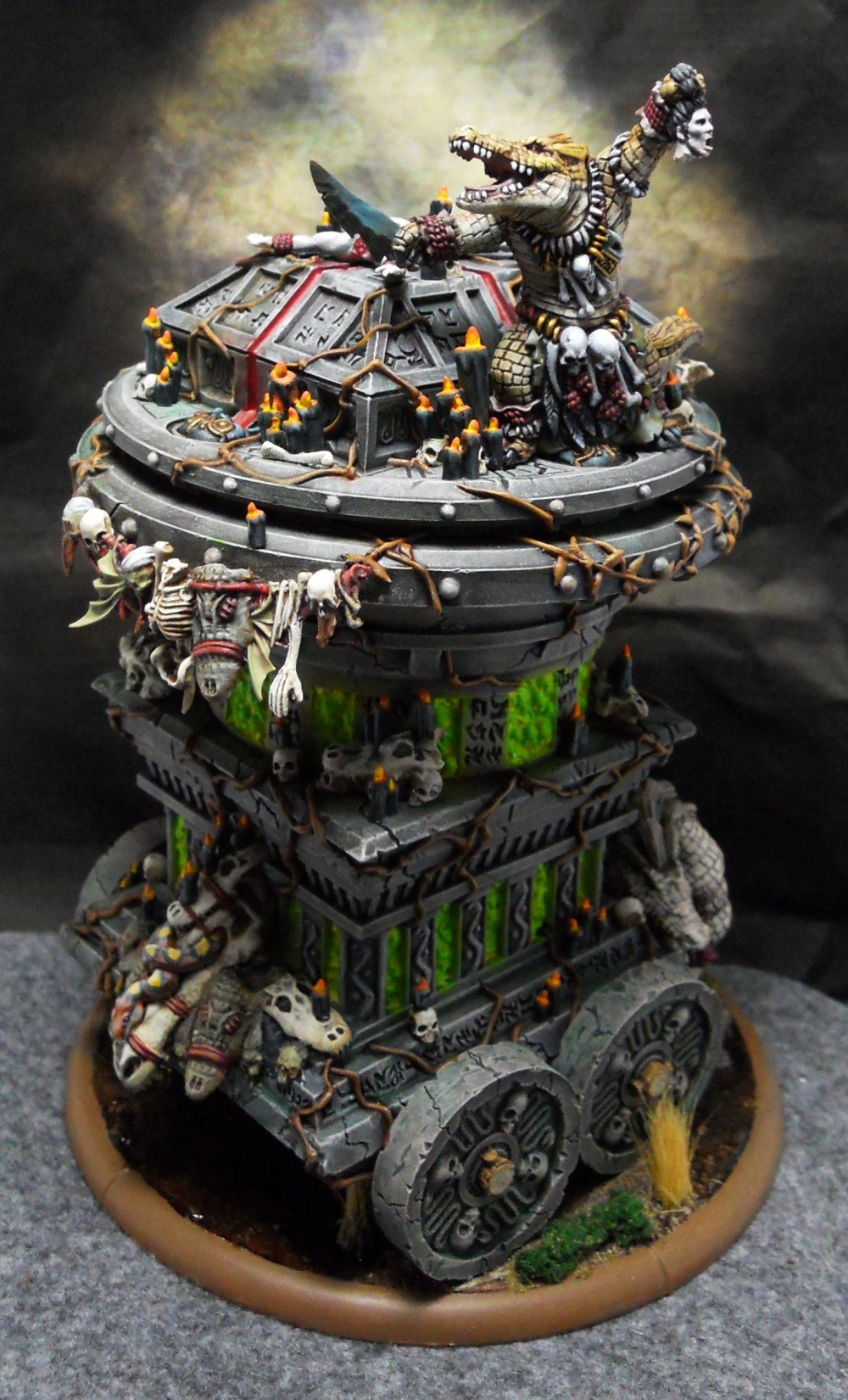 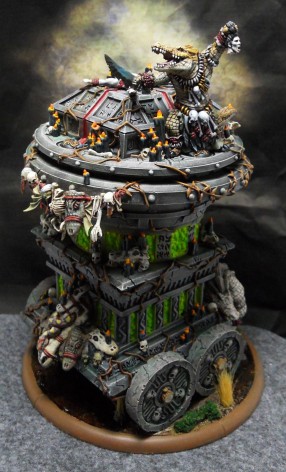 “Give us a tutorial on painting giant rocks covered in skulls and candles!” you’ve all been shouting. Ok, settle down, here goes… 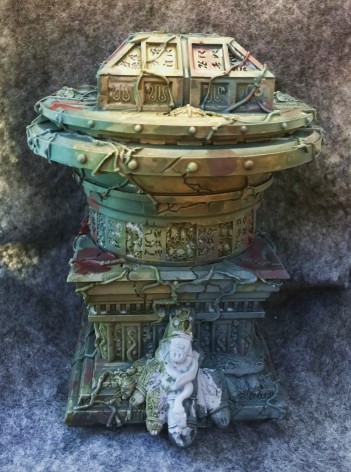 I’m going for something just a tad easier than a lot of my painting articles have been lately. We’ll call it high tabletop standard rather than anything that might be competition-worthy. This one should hopefully be easier for most of you to follow along with. A lot of it is just drybrushing.

Step 1 with rocks is important. How were most of you thinking this article would start? Paint the whole thing gray? Wrong. The last time you were out camping or on a hike somewhere nature-y, did you stop and take a look at the rocks around you? Ok probably not. They’re not actually gray it turns out. Rocks are fairly loaded with color. So for step one I’m alternating between splotches of Greatcoat Gray, Traitor Green, Cryx Bane Base, and even Sanguine Base all over this model until it’s covered. 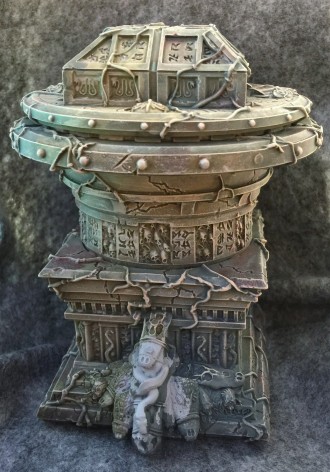 I find the best way to get a good rocky texture is with some of that good old fashioned drybrushing. For big models like this I have a rather large beat up old brush I actually got back in college, which could easily make it older than some of the people who end up reading this. Good drybrushing technique means wiping almost all the paint off your brush. I have an old cotton t-shirt I use for this step. Before I actually start the drybrushing I give the brush a few wipes across the back of my hand to make sure there really is hardly any paint left. It will take multiple layers of drybrushing to achieve the best effect so be patient. You should barely be able to see the first layer when it goes on. The color I’m using here is Thrall Flesh. 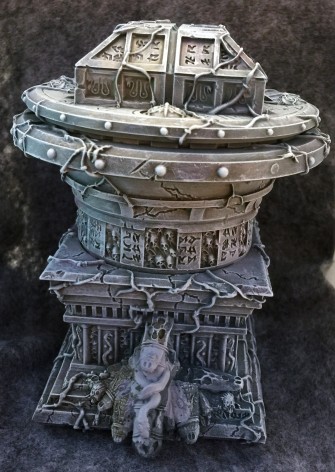 After that it’s some Trollblood Highlight and then some Frostbite. While none of these colors could be described as vibrant, they do have tones of green, pink, and blue. I just won’t abide plain gray rocks. 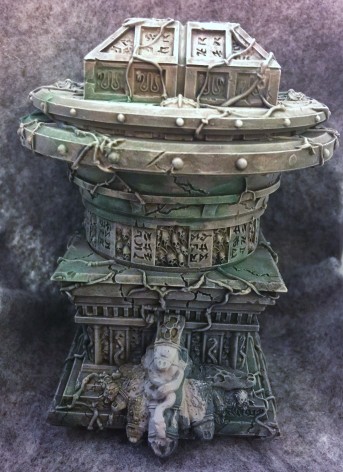 Then it’s time for a wash of Nuln Oil. While the wash is still wet I dab on some Gnarls Green here and there for a nice organic kind of algae look. 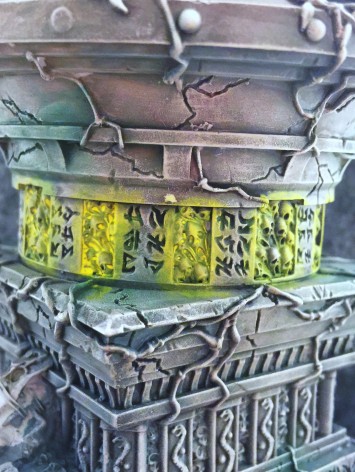 Now it’s time to move on to all those roiling souls in torment. I really wish I had some of that Iyanden Darksun or whatver GW is calling that foundation color these days, but the pot had dried up since last I used it and I was too lazy to go drive to the store. As you can see the Cygnar Yellow will take a few coats. Of course that hasn’t stopped me from getting started on the glows. Wet the whole area first by painting on pure water. Then apply the paint just to the edges. The capillary action will pull the yellow away and do some of the blending for you, but to get it right you will need to take a clean wet brush (I used a largish #2 I think) and kind of “pull” the paint gently away from the “light source.” This may take some practice. 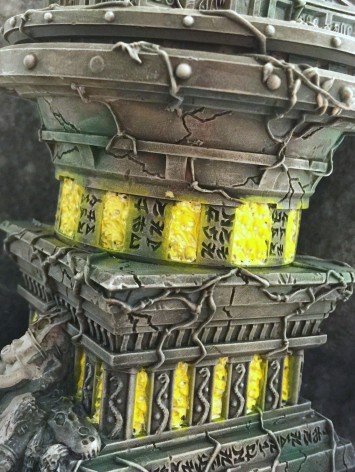 To help get better coverage I mix some Menoth White Highlight in with the Cygnus Yellow. I was actually going to do a yellow glow at first but… 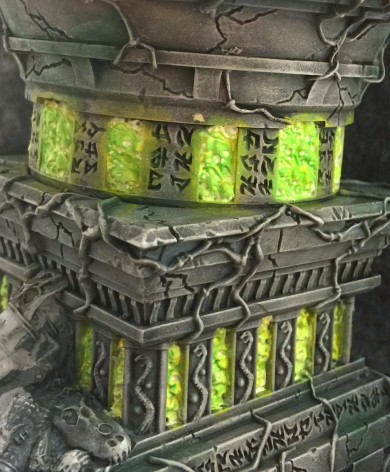 I wanted a more spooky look so I drybrushed some Necrotite Green on to the top of the pale yellow. Doing all the recesses light and the raised areas as a darker color can help create the illusion of a glow, but as you can see, you can’t paint over real shadows. There simply isn’t a way to create a perfect glow. 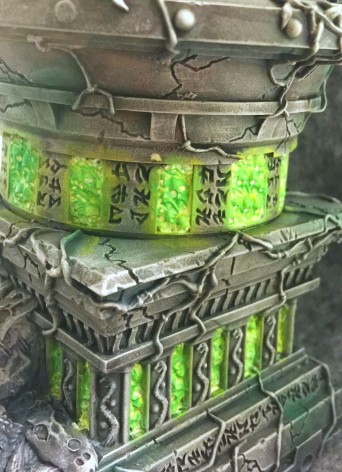 Next I drybrush a very thin coat of Iosan Green over them to provide just a little more contrast. 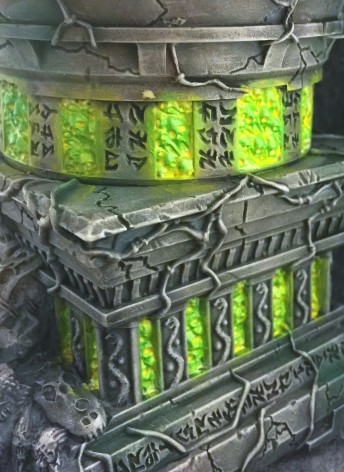 Then I give it a wash with p3 yellow ink. If you haven’t used P3 inks they are quite a bit different from GWs. They saturate a whole area with color rather adding shading. Some, like the Red and Yellow, can often dry lighter than the area you apply them to. 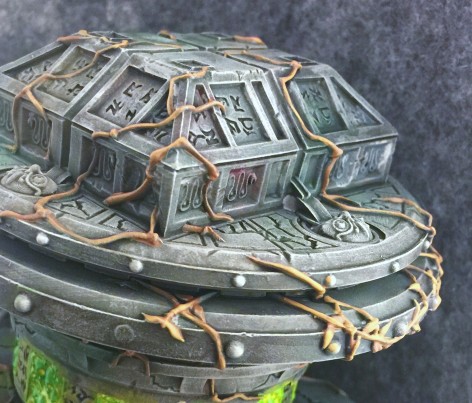 That does it with the glows. I don’t want to spend too much time on these vines. since they’re not that complicated: Rucksack Tan washed with Agrax Earth then highlighted with more tan after the wash dries. 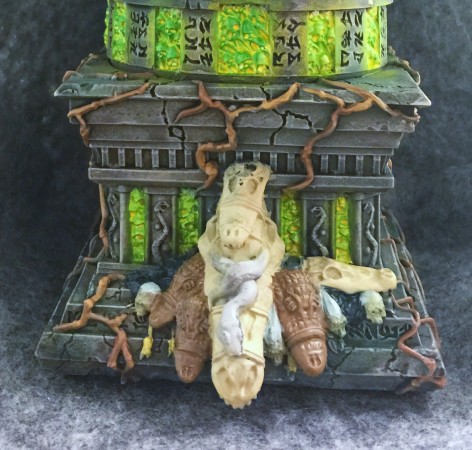 Now it’s time to paint up this splendid hood ornament. We have a few colors here, but we’re going to use mostly drybrushing to define these areas. But first, the bones get a basecoat of Menoth White Base. The gator heads: Gun Corps Brown. The shrunken heads: Thrall Flesh with a little Ordic Olive mixed in. Their hair: Underbelly Blue. The big puddle of wax: Coal Black. 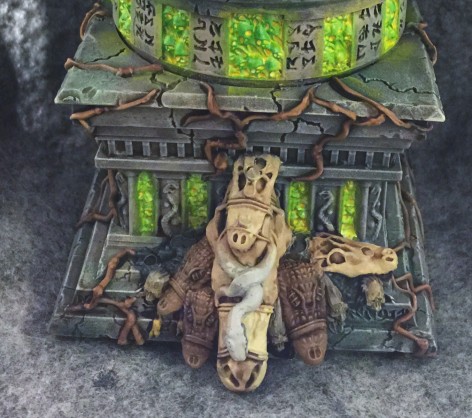 Then everything gets a wash of Agrax Earth. 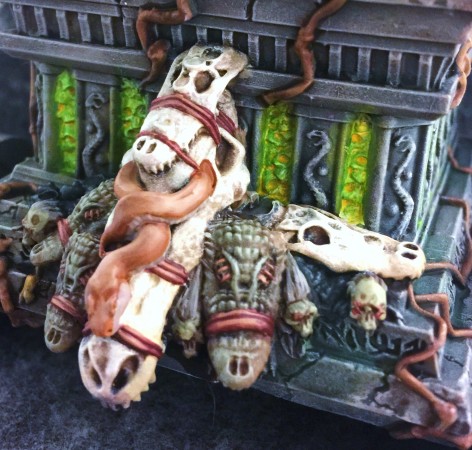 Now it’s time for all the Drybrushing. The skulls are drybrushed Menoth White and then drybrushed Menoth White again. The gator heads are drybrushed with the Thrall Flesh/Ordic Olive mix, then some Underbelly Blue. The shrunken heads are highlighted with pure Thrall Flesh. Everything else I think is fine with just the wash. Of course I do need to paint the ropes though. These are Sanguine Base highlighted with Sanguine Highlight then a last little highlight with a 4:1 Sulfuric Yellow/ Sanguine Highlight mix. Sulfuric Yellow is kind of thin so it doesn’t take much red to make it appear fairly orange.

I also start on that snake. Wasn’t I just painting snakes? It’s belly starts with Menoth White Base and the rest of it is Bloodstone. 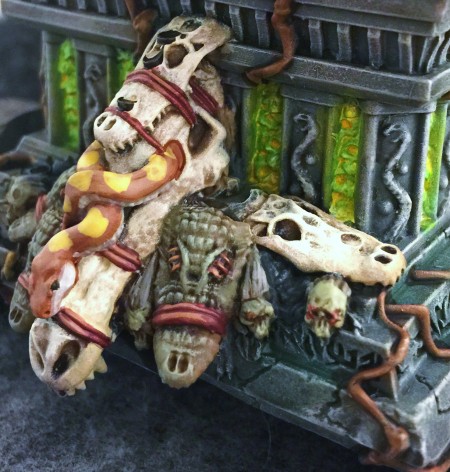 I add some Menoth White Highlight highlights to the cheeks and belly, and some Sulfuric Yellow splotches down it’s back. 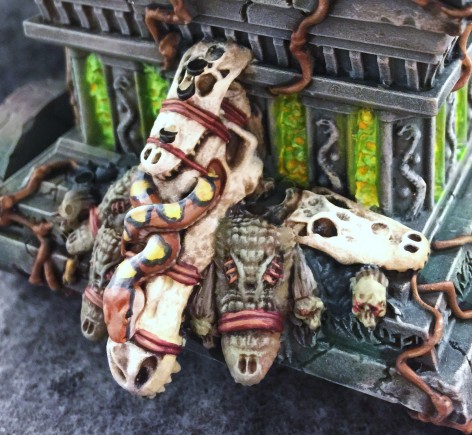 I add rings of Exile Blue around the yellow, and then add a highlight down the spine. This is done in a similar way to the glow; the areas is painted with a thin layer of water, then Morrow White, thinned with some Retarder is painted down the spine, then blended into the surrounding area with a clean damp brush. 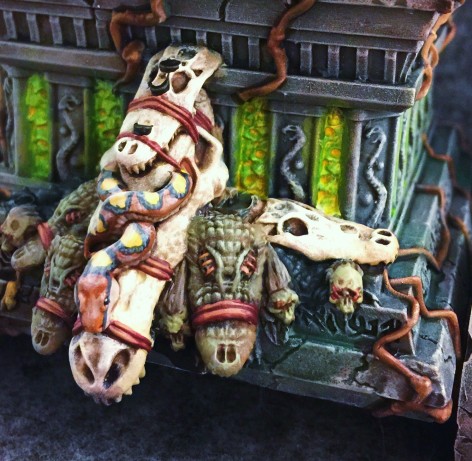 I wanted just a little more detail on the snake, so I added some “scales” by stippling on lighter blues and browns where needed. I also added a tiny dot of reflected light to the eye. 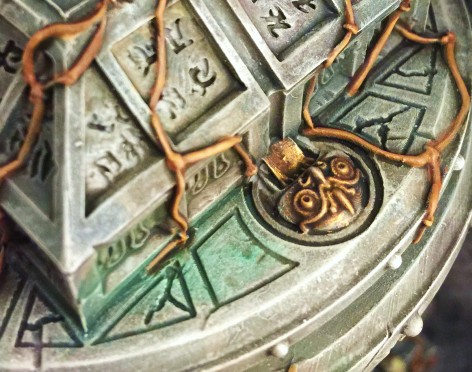 The last part are these delightful Orgoth faces. I start by giving them golden tongues and eyebrows. They start with a basecoat of Beasthide which is drybrushed with Rhulic gold, then washed with Agrax Earth. 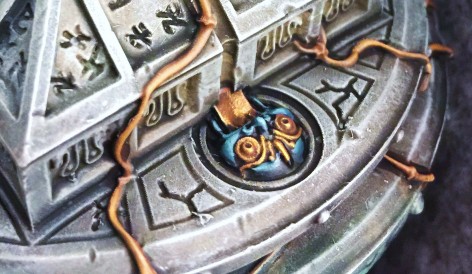 To mark them out from the rest of the stone I try giving them the appearance of jet. A black basecoat is highlighted with Coal Black, to which I add increasing amounts of Underbelly Blue. 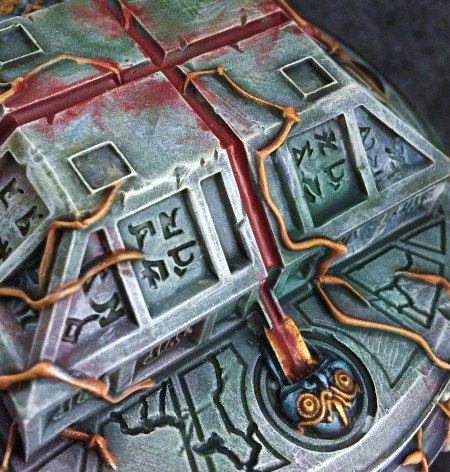 Then I bloody it up a bit, painting Sanguine Base down the stone channels and down in to the mouth. 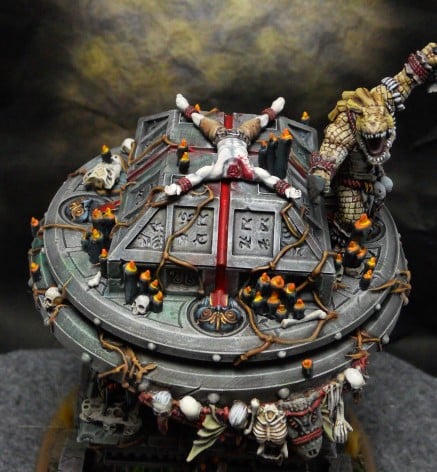 Then, as you can see in this finished shot, a streak of Khador Red Base is painted down the middle of the channel. I personally try to go conservative on bloody areas like these. I think it looses some effect and starts to look ridiculous if you splatter it all over.

~Hope you enjoyed part 1. There will be plenty more to come. There are enough bits that I think I may have to make this a three-parter.

Author: Ben Williams
Ben Willimans is a Professional Painter and Columnist at Bell of Lost Souls. He has been involved in the hobby and art side of miniatures and the tabletop gaming industry for over 20 years. He has won multiple national painting awards.
Advertisement
Game Tutorial Hobby Minions Painting Warmachine-Hordes
Advertisement 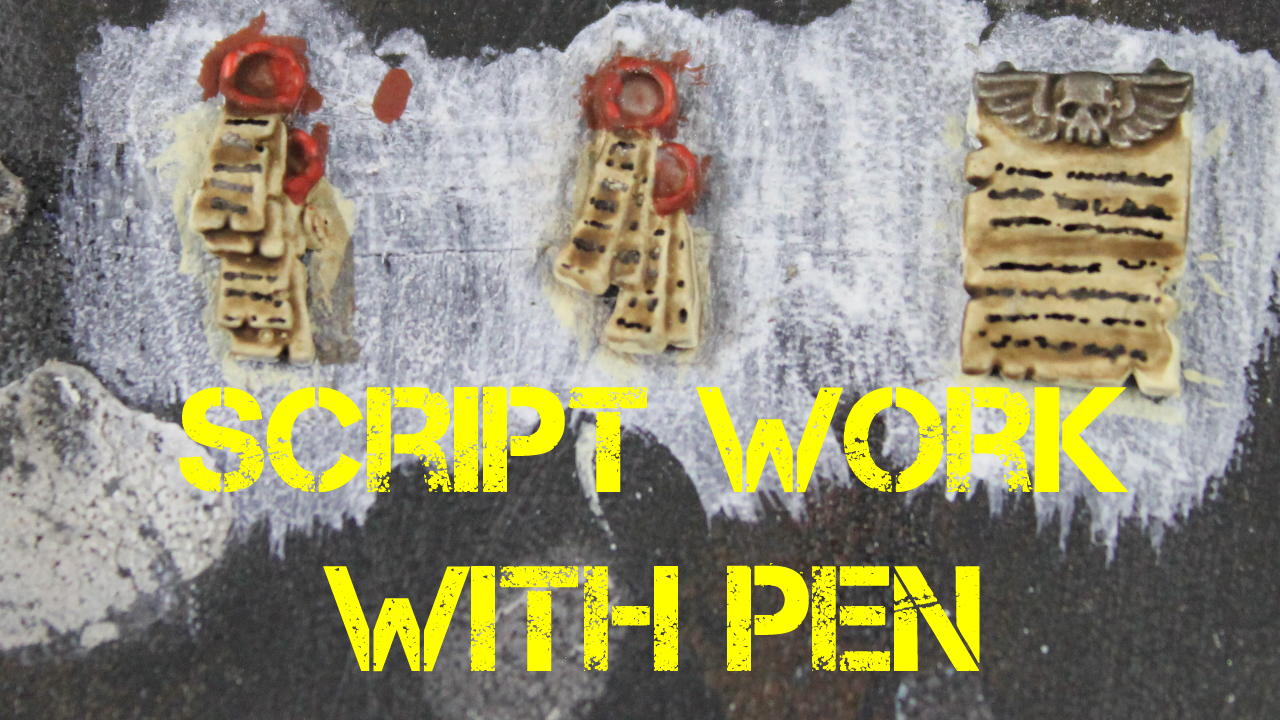