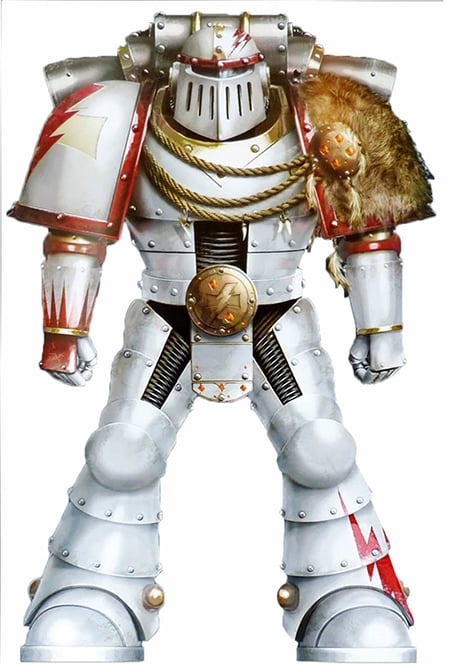 Today we anticipate the Horus Heresy line of products with a detailed look at Mk. II Crusade Armor! Come forth tech adepts. 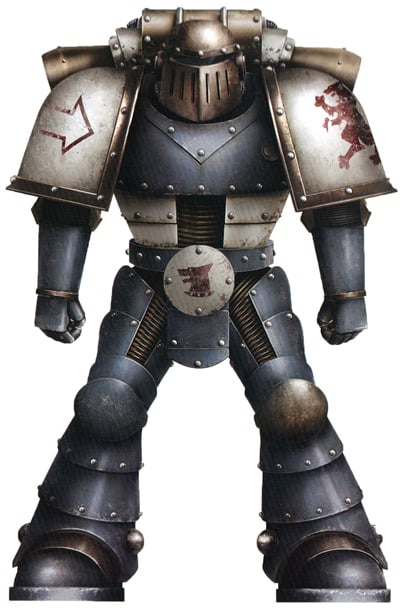 After the conquest of the main planets of the Sol system, the factories on Mars were set to work constructing a new type of armour for the Emperor’s elite Space Marines. This armoured suit is commonly referred to as “Crusade Armour,” since it was designed with the planned Great Crusade in mind, and its production led to the Thunder Armour being retroactively designated as the Mark I. It was the first fully enclosed power armour, with life-sustaining capabilities, making it suitable for combat on toxic alien planets and the depths of space.

Crusade Armour is fully plated, and the legs are also power armoured. The plates are arranged into articulated hoops, for increased maneuverability. The chest coils, which were kept on the outside of the armour plating on Mark 1 armour for cooling purposes, have now been placed on the inside of the chest plates, so that they are better protected, thanks to more efficient cooling mechanisms. However, this design could not be copied over to the new powered leg armour, which resulted in exposed cabling on the backs of the lower legs. The backpack is roughly the same size as that on the Mark I armour, but is much more efficient, and also includes extra life support, air recycling and fluid recovery equipment, as well as automated medical devices that have remained a part of Space Marine armour ever since.

The helmet is fitted with automatic sensory devices developed on Mars, which allow the wearer to see and hear as though not wearing a helmet,and, since all information is transmitted to a computer in the helmet before being transmitted directly to the wearer’s brain via neural link, it enhances sight and hearing while dampening blinding lights and deafening noises. The wearer is also able to see in the infra-red and ultra-violet spectrums, images can be zoomed in and magnified while noises can be enhanced. The helmet was fixed in a single position, but allowed the occupant to turn his head inside.

Mark II armour is believed by many to still be the most efficient example of power armour design, although with the caveat that the overlapping hooped armour plates are difficult to repair. It can still be found in operational use – in extremely limited numbers – amongst several Space Marine Chapters.