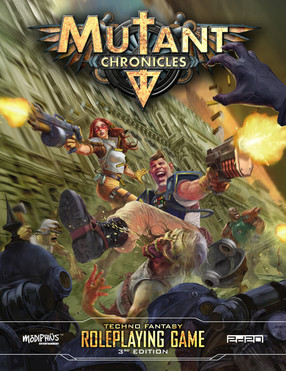 The Mutant Chronicles RPG, Players Guide and Collectors Edition are in stores NOW – Get your Techno Fantasy on! 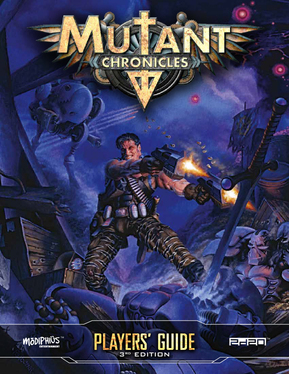 The solar system is a roaring maelstrom of war and death! The inner planets have been swept away by the violent onslaught of the Dark Legion’s monstrous hordes of undead soldiers

London 20th November – Modiphius, the creator of acclaimed table top and roleplaying games like Achtung! Cthulhu and the Thunderbirds board game, is proud to announce the release of The Mutant Chronicles Dark Symmetry Core Book, an exclusive Core Book Collector’s Edition and The Mutant Chronicles Player’s Guide.

It’s a trio of releases which gives players everything they need to explore this dark, unsettling universe, where the solar system is riven by war, corporate intrigue and vicious infighting in the face of a vicious Dark Legion invasion.

The Mutant Chronicles Core book is available from Modiphius in both Print and PDF and exclusively as a Collector’s Edition or from DriveThruRPG.com.

The Mutant Chronicles Player’s Guide is available from Modiphius in both Print and PDF or from DriveThruRPG.com

Mutant Chronicles, created by  Paradox Entertainment was one of the biggest names in gaming in the 1990s with the Doom Trooper collectible card game translated in to 16 languages, three boardgames, a SNES and Mega Drive Doom Trooper video game, a massive Warzone miniatures game and the hugely popular Mutant Chronicles 1st and 2nd Edition roleplaying games.

Mutant Chronicles takes you on a full – throttle diesel-punk ride though a solar system beset by corporate intrigue and the invasion of the Dark Legion. With technology failing due to the insidious effects of the Dark Symmetry, mankind must fight back against the Dark Legion hordes whilst dealing with in-fighting and conspiracy.

Investigate foul cults as technology turns against mankind, or fight the armies of the Dark Legion as they pour forth from citadels across the colonies the battle for humanity’s future.

Hot on the heels of the Dark Symmetry Core book comes The Mutant Chronicles Player’s Guide, with content drawn from the 3rd Edition Core Rulebook, and containing everything players need to create characters in the Mutant Chronicles universe, as well as an introduction to the 2d20 game system.

based on a character’s Faction, Status, Environment, Education and Careers

These three brand new releases form the core of the Mutant Chronicles universe, with further releases already planned in for early 2016 including special supplements for all major corporations like Capitol, Mishima and Brotherhood, plus further accessories in the Mutant Chronicles range like custom dice sets and GM screens. A dark universe of high adventure awaits!

Author: Adam Harrison
Writer, Editor, Texas Native, and Austinite for 15+ years, Adam covers all things Tabletop Gaming. Which includes Warhammer 40,000, Age of Sigmar, D&D, Board Games and everything else that involves dice, boards, cards and a table. A hobbyist, player, and collector of miniatures and games, Adam's current obsession are his Death Armies for Age of Sigmar, his Blood Angels and Tyranids for 40k, and his ever growing Arkham Horror: The Card Game Collection.
Advertisement
RPGs Sci-fi Warzone
Advertisement