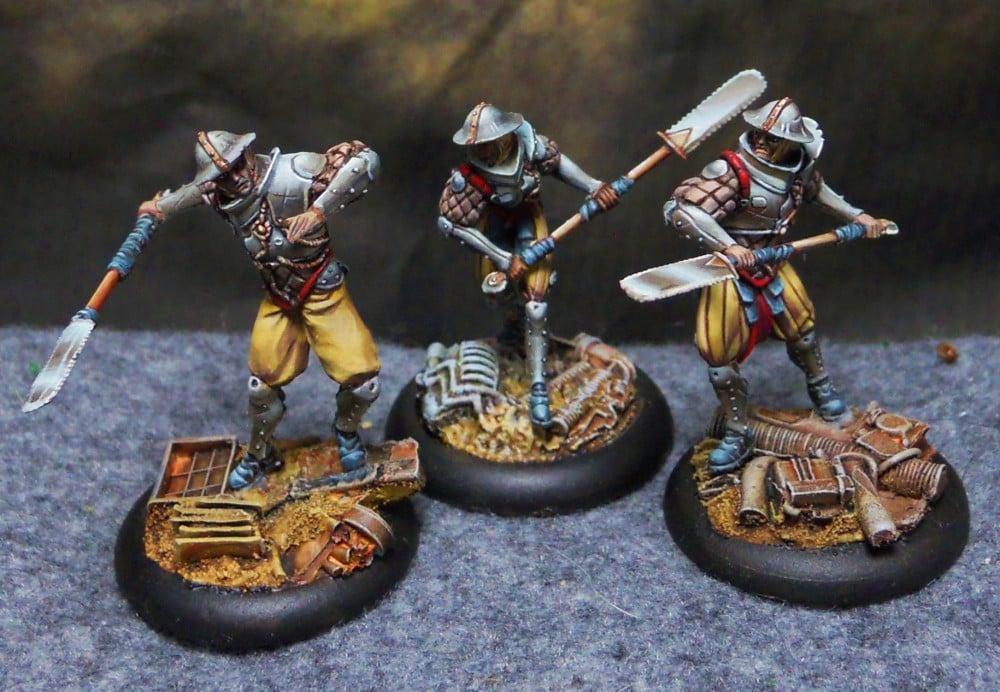 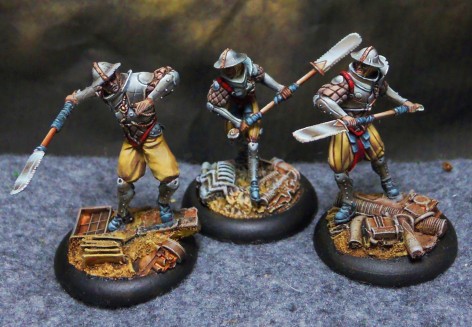 Time to finish up these Flock for my Forsaken army. Grab a paintbrush and follow along! 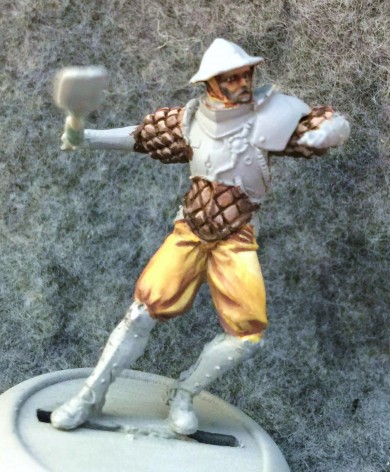 Here’s where I left off last time. That means we just have the interesting metallic parts left. 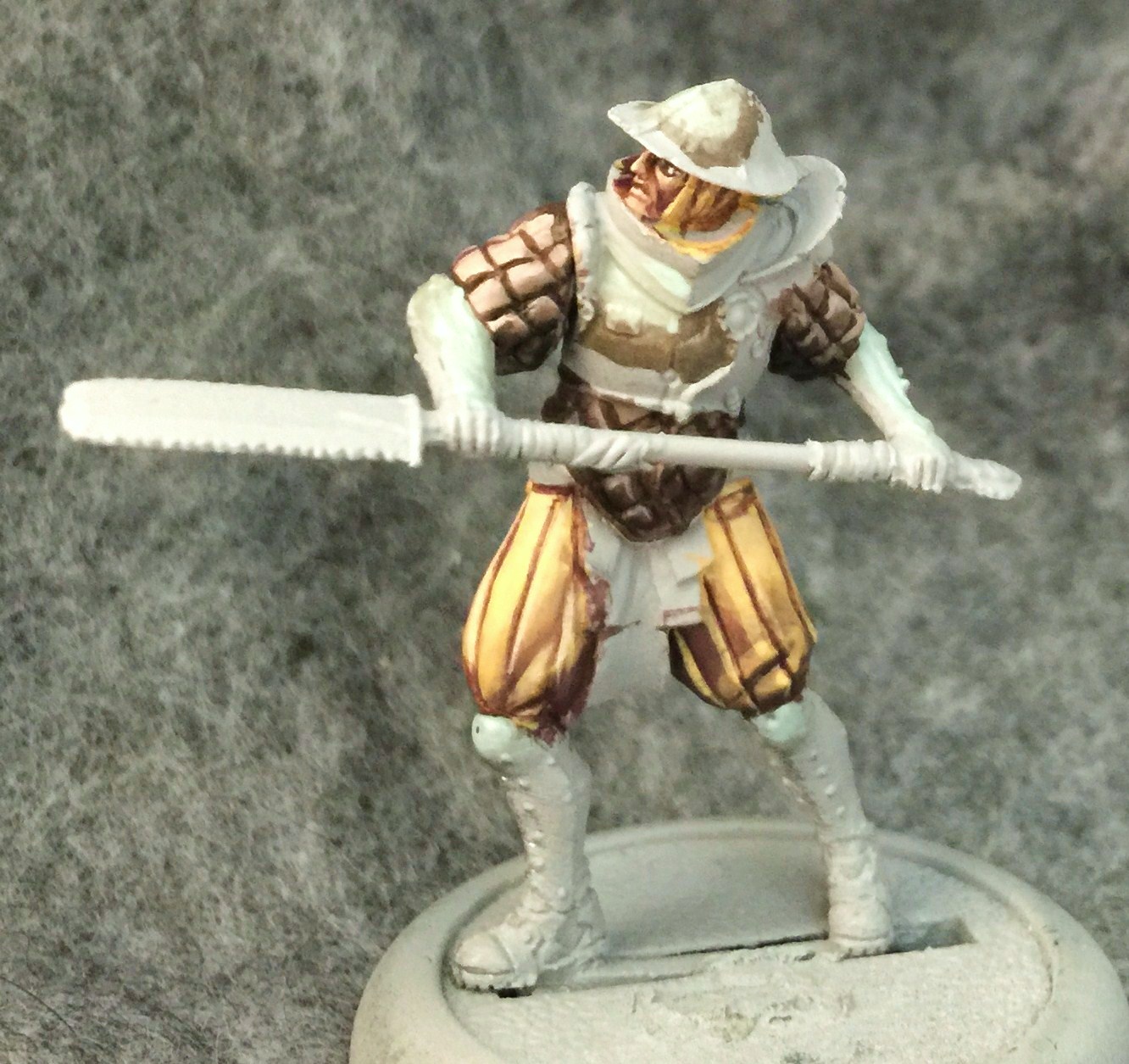 I start by blocking out the lights and darks. The chest is a rounded surface so I’m going to try to simulate the reflection of the entire horizon on the area. I start with Underbelly Blue for the “sky” on the upper right and run that into a horizon line of Thornwood Green (really more of a dark Gray than a green). I’ve also started on the helmet. Here I’m just trying to focus on a more central light area slightly offset from the apex of the dome. 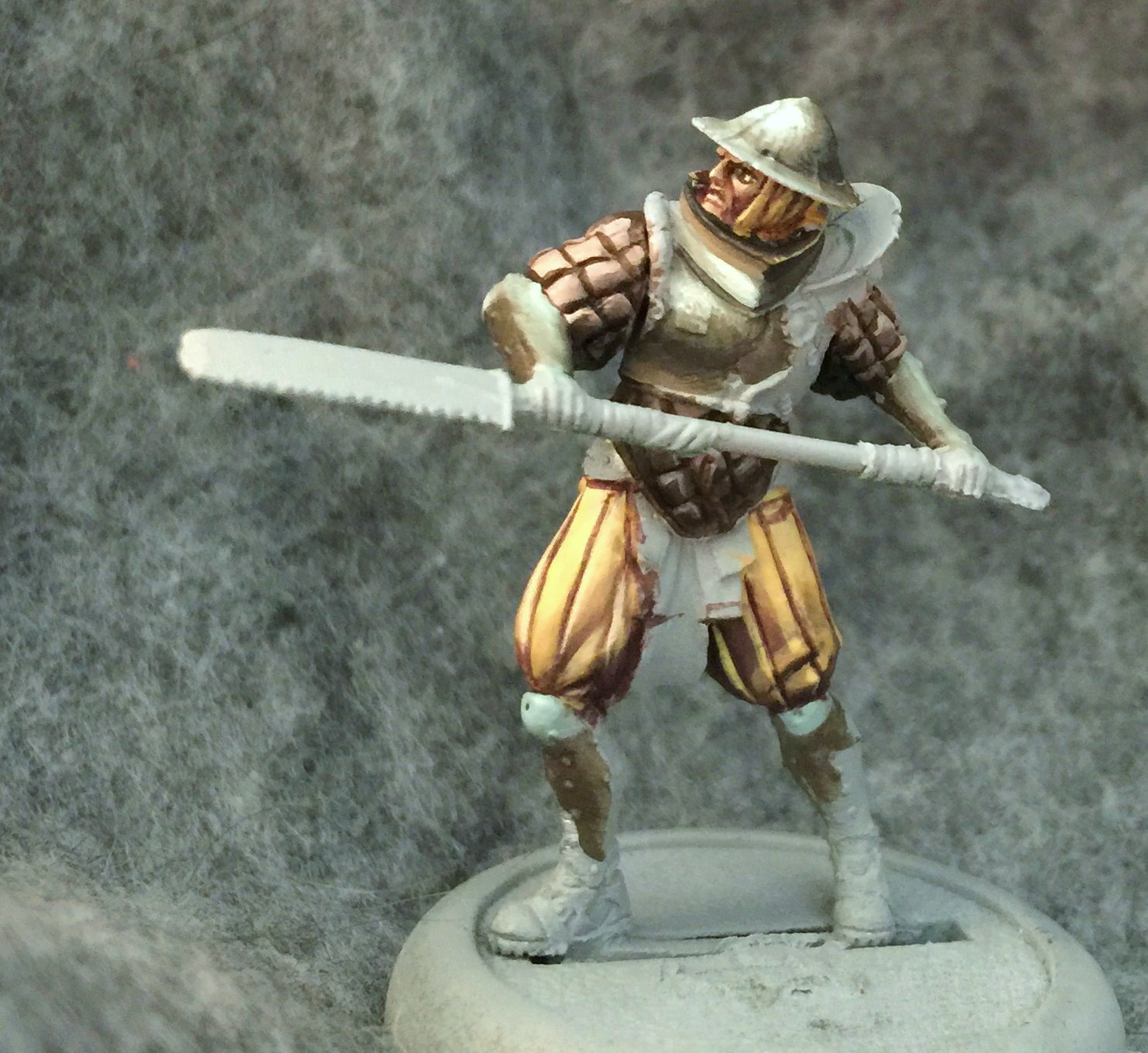 Now I spread out to other areas of the metal and begin blending a little. Down the middle of the chest plate I add a darker line of black with some Bloodstone (an earthy orange brown) mixed in. On the bottom of the curve on the chest I add some Hammerfal Khaki. This warmer color represents reflected ground. For the brightest highlights I add some Menoth White Highlight into the mix. 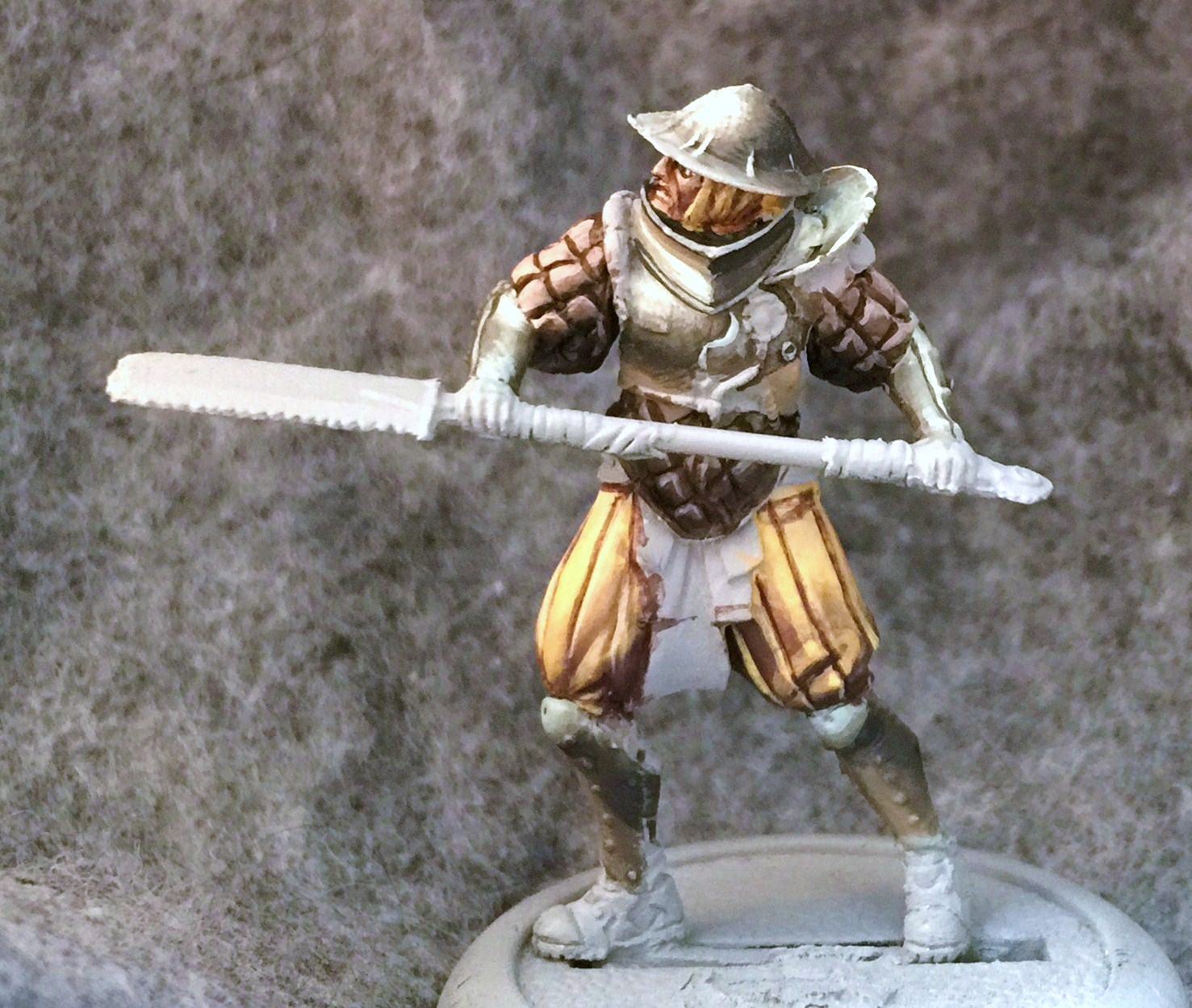 As I spread out to the rest of the model, the greaves prove to be one of the trickier areas to figure out. I end up using the Underbelly blue only on the kneepads, and run Hammerfall Khaki down the base of the lower leg. Again this simulates reflected ground. 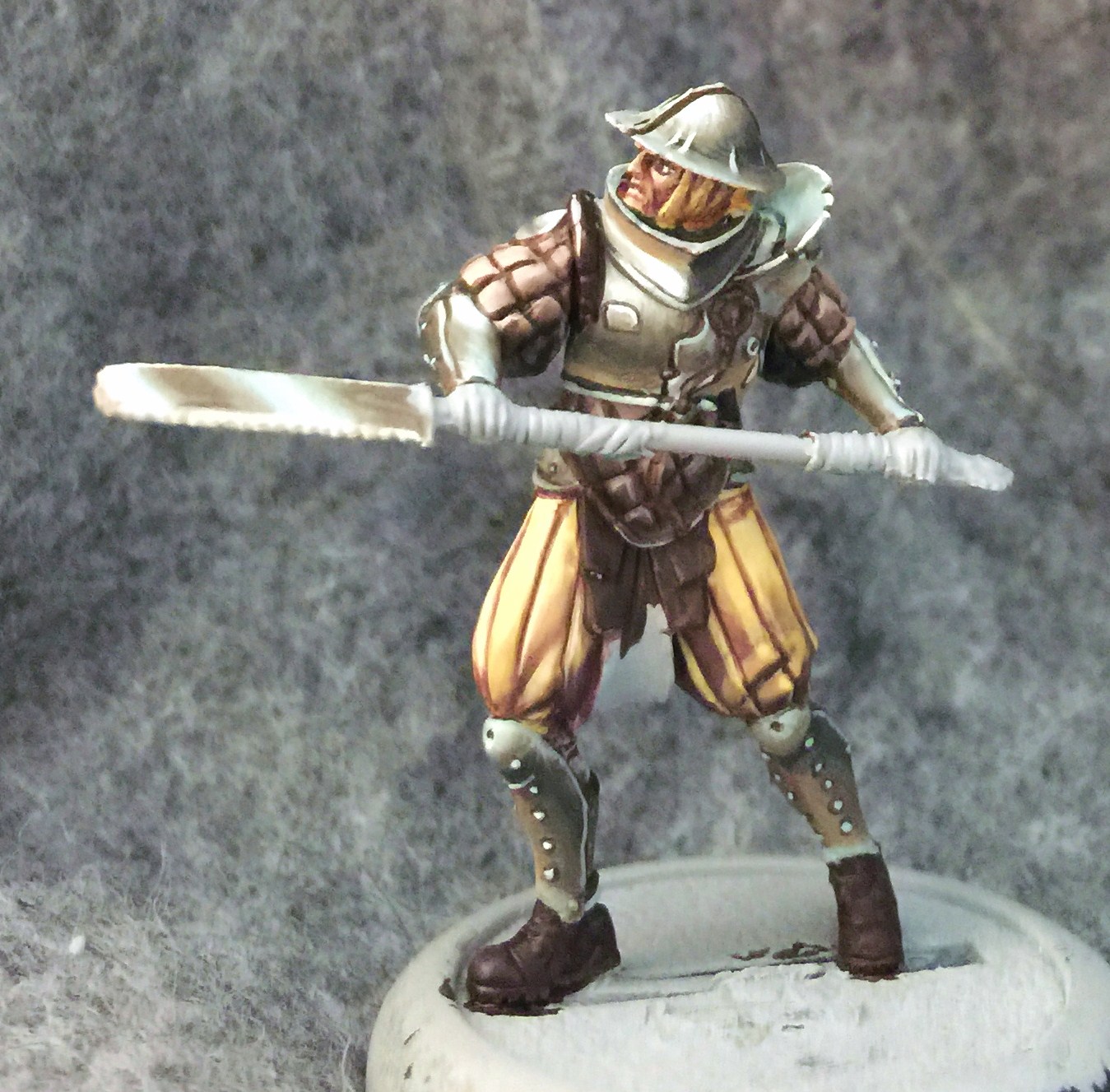 I add the final thin layers and get everything nice and blended. All the ridges and edges get a nice thin line of Underbelly Blue and/or Menoth White Highlight. 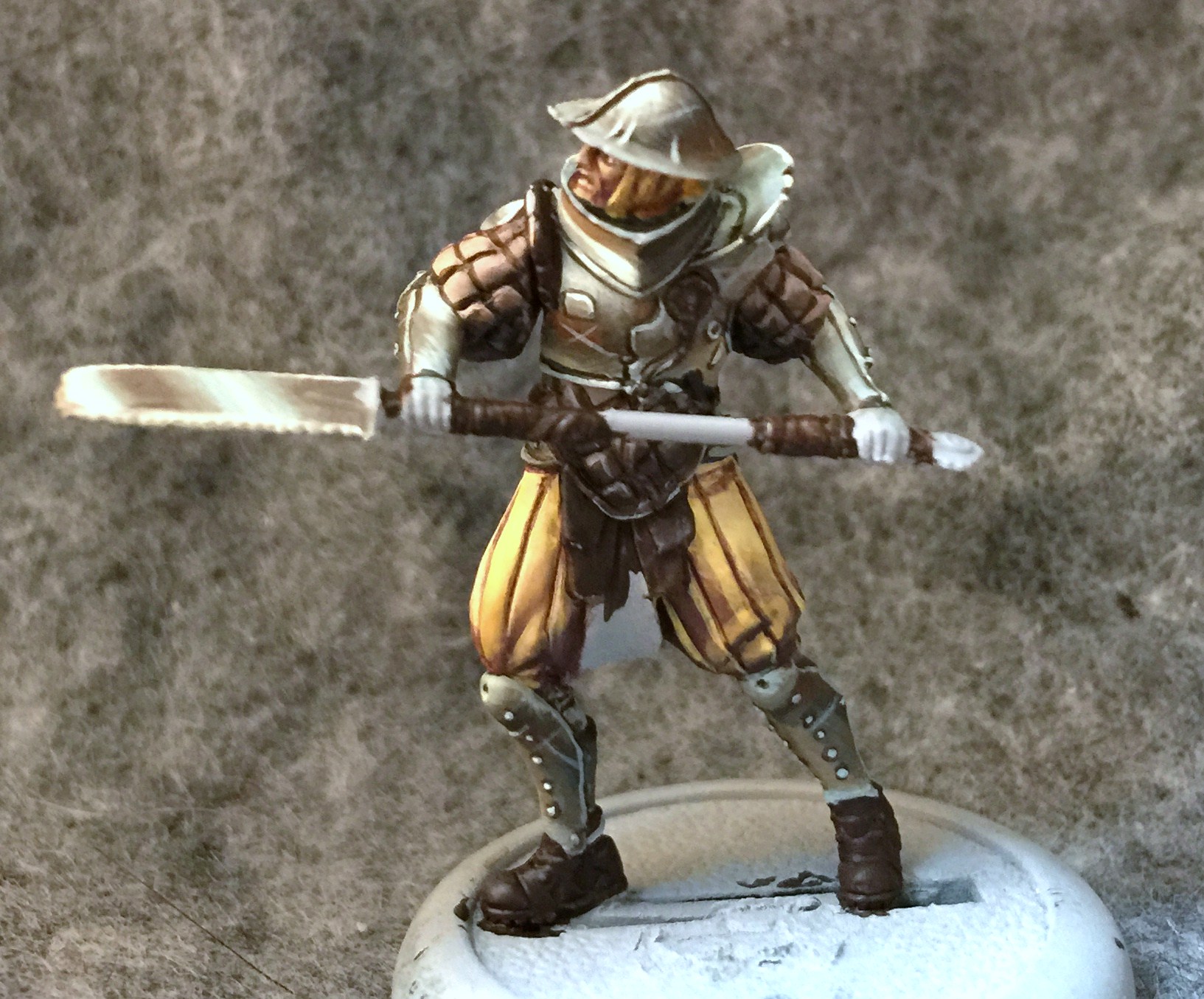 I add a little rust in the darker areas by putting on a very thin glaze of Bloodstone. If you wet the area first, the “rust” blends in to the surrounding area with minimal. The trick is to add just the slightest layer of water. Even a little too much and any paint will bleed into everything. Next I add a couple of scratches with very thin lines of Underbelly Blue. 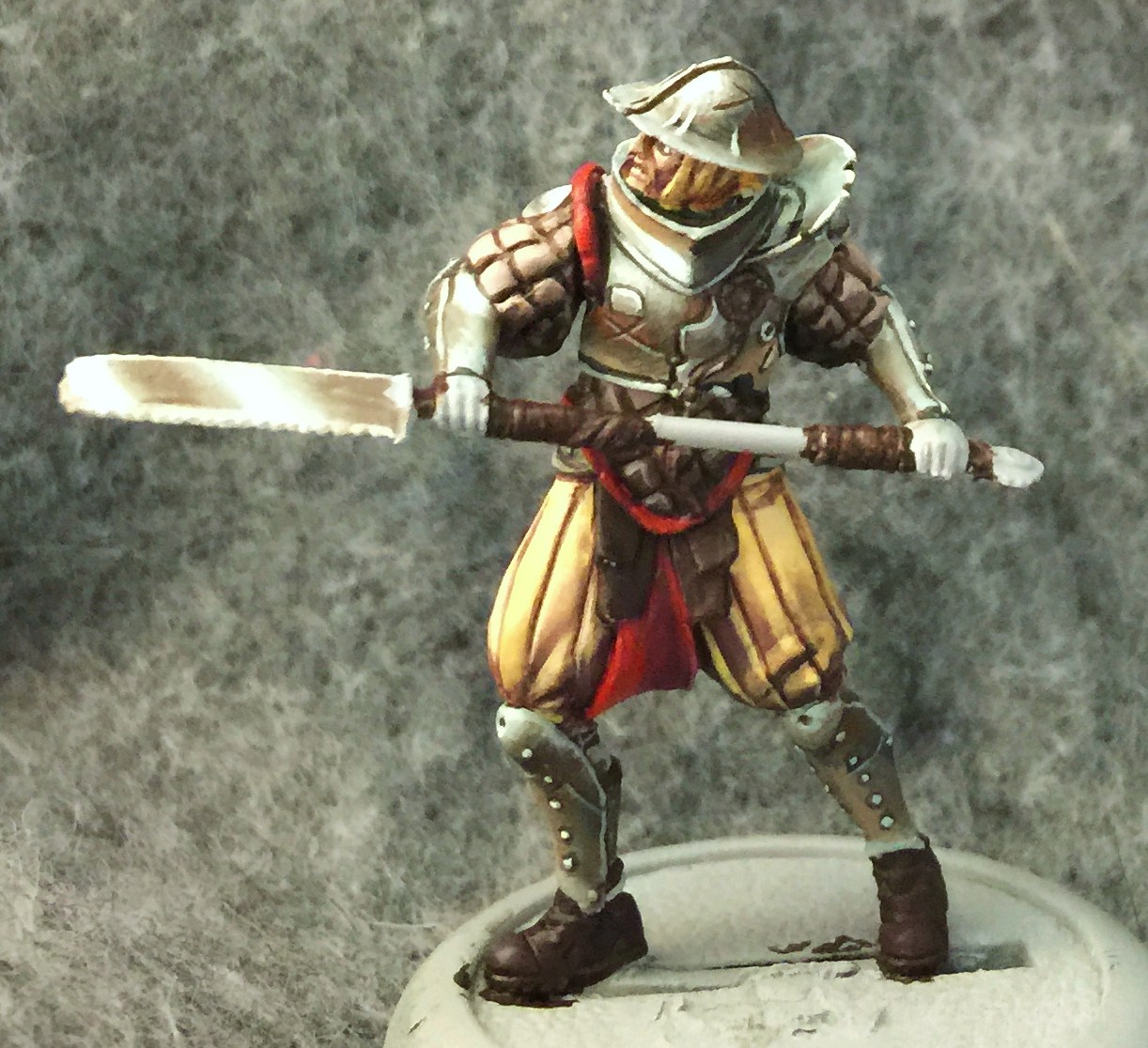 The illusion of a scratch is completed by adding a thin line of that Black/Bloodstone mix right above the Underbelly. I also finished the red accents at this time. They are Khador Red Base shaded with Sanguine Base and in some areas just a tiny bit of that Black/Bloodstone mix. Since it’s all wet blending I wasn’t able to get WiPs. You might have noticed I also went over all the leather areas with that warm black mix too. 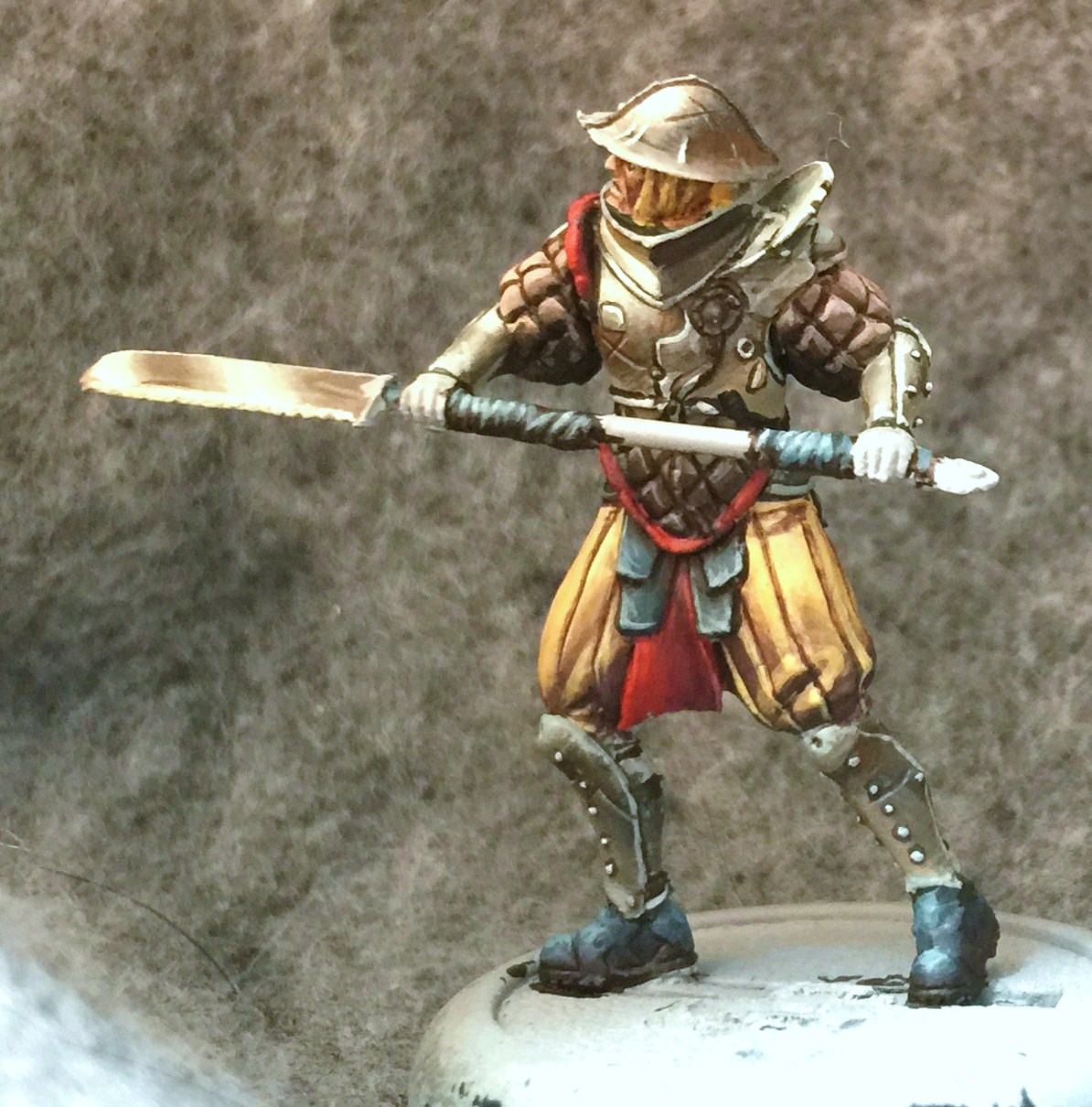 The leather is highlighted with Coal Black all the way up into Underbelly Blue. 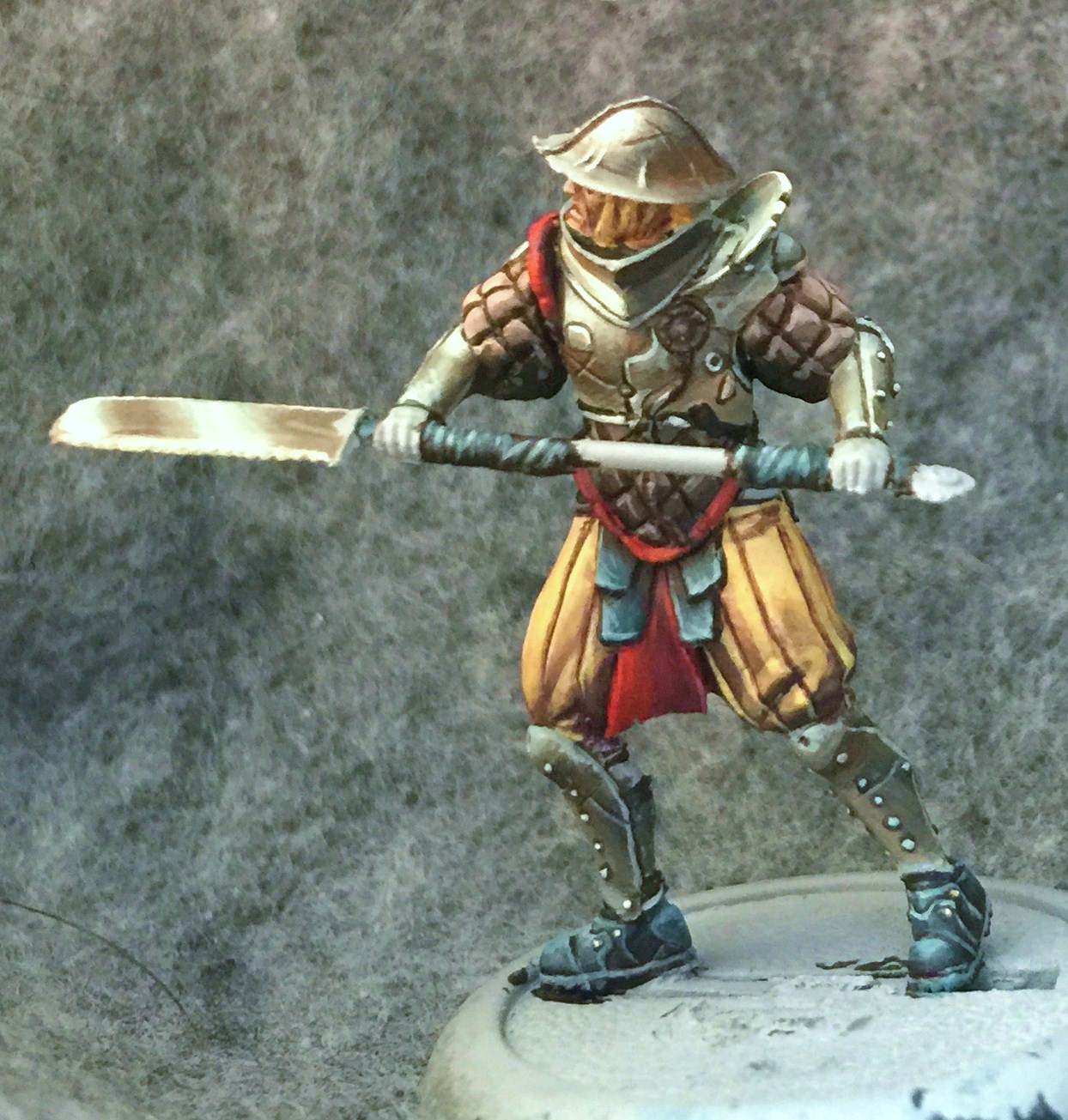 Then there’s the tedious part of lining all the separate sections. Each needs two lines: one line of Highlight along the ridges, and one of black in the recesses. 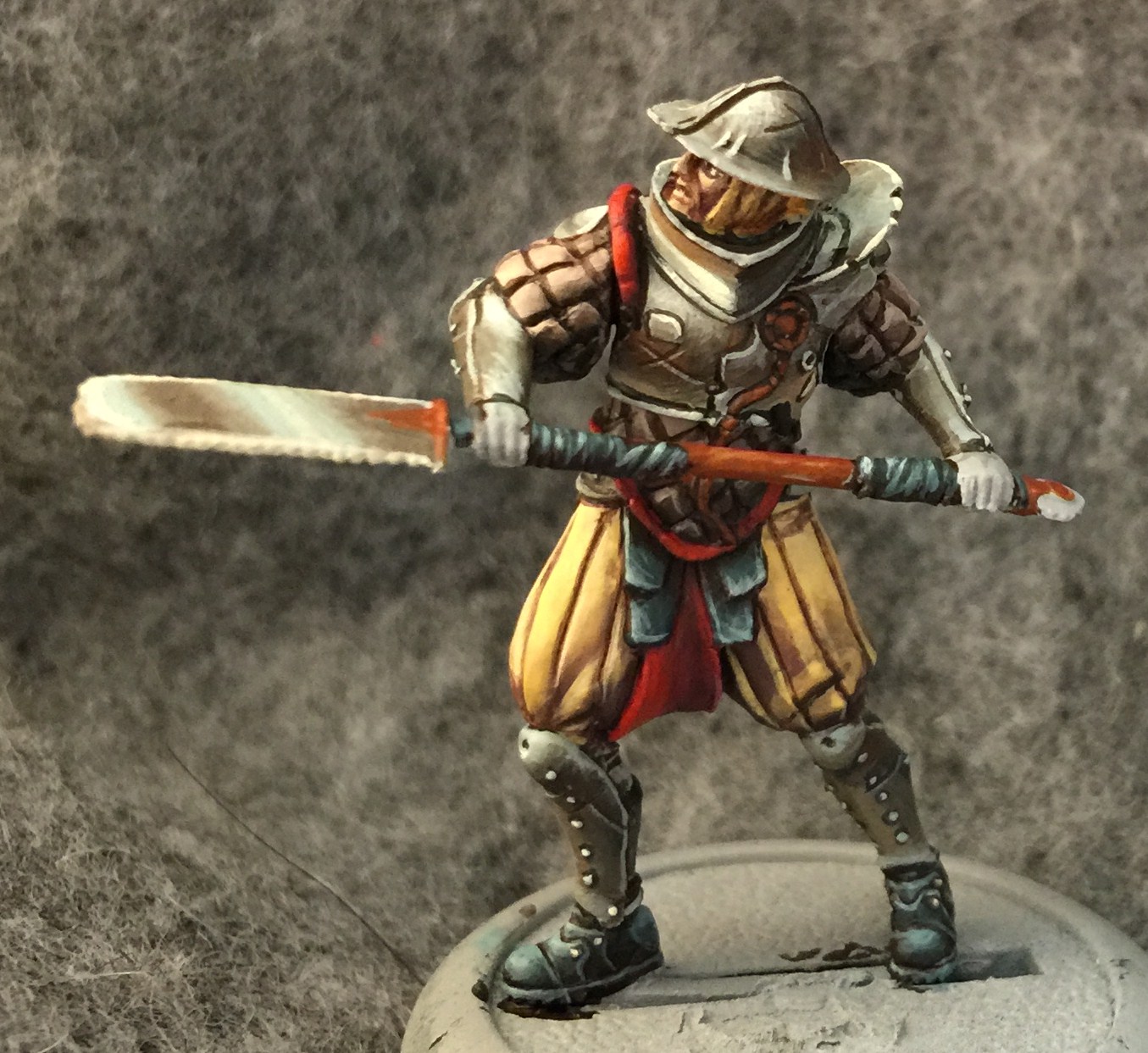 Then it’s time for all the copper areas. These start with Bloodstone. 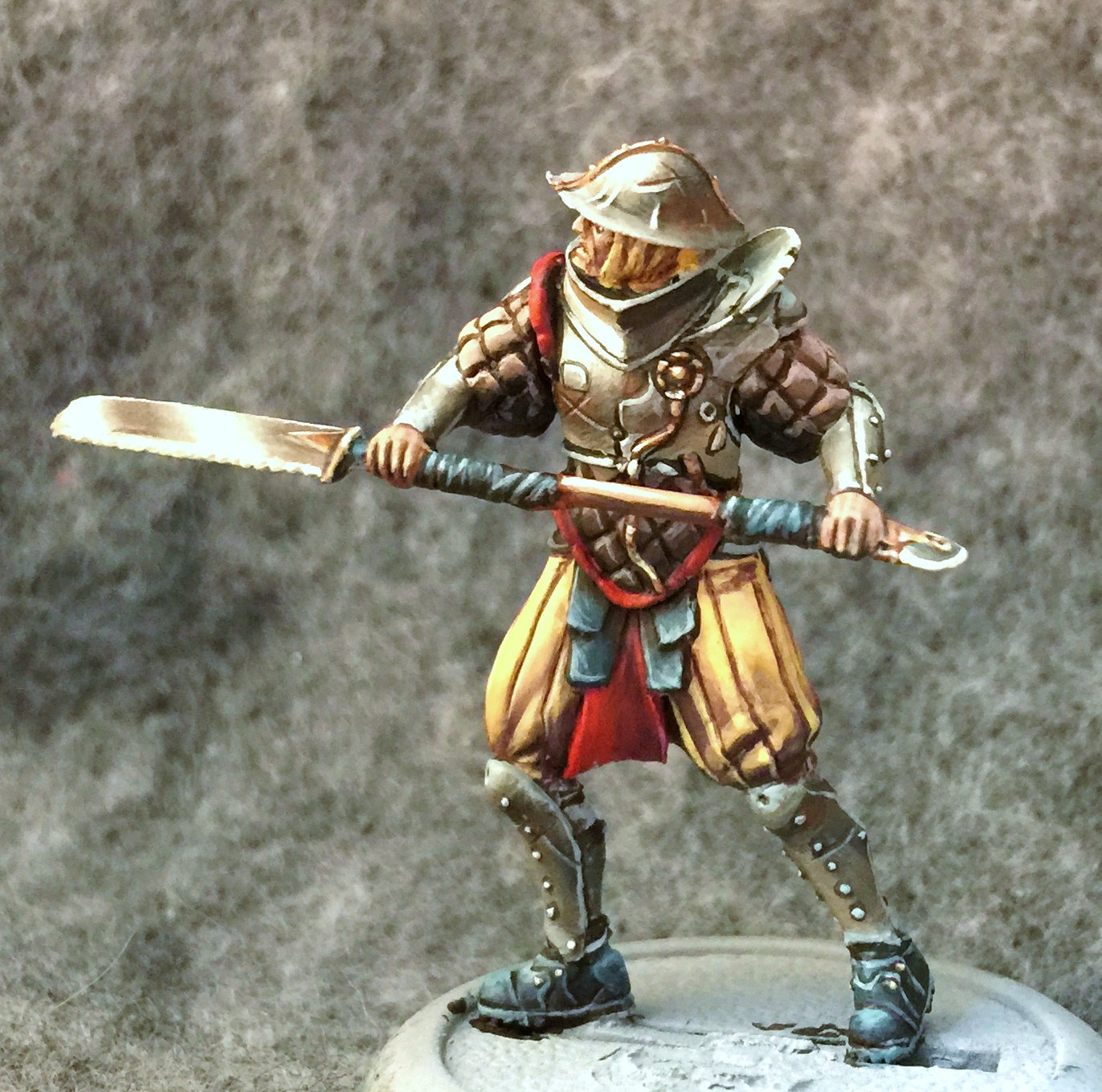 The Bloodstone is highlighted with Thrall Flesh, then Menoth White Highlight, and shaded with Coal Black. Add a nice streak of highlight down the top, blending to the Coal Black in the middle. The base of the rod stays pure Bloodstone.

Then I finish the hands. I had meant to give these guys black leather gloves. I like how gloves add a slightly sinister touch. But since I ended up doing the bindings black I just went with flesh colored hands so they don’t just disappear. Flock aren’t really supposed to be sinister anyway. 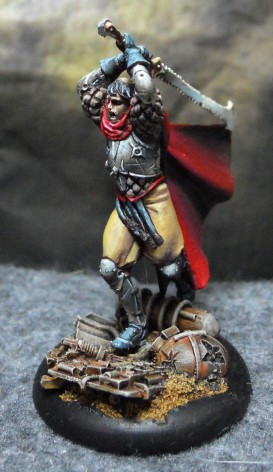 Here’s the Shepherd who leads the Flock. 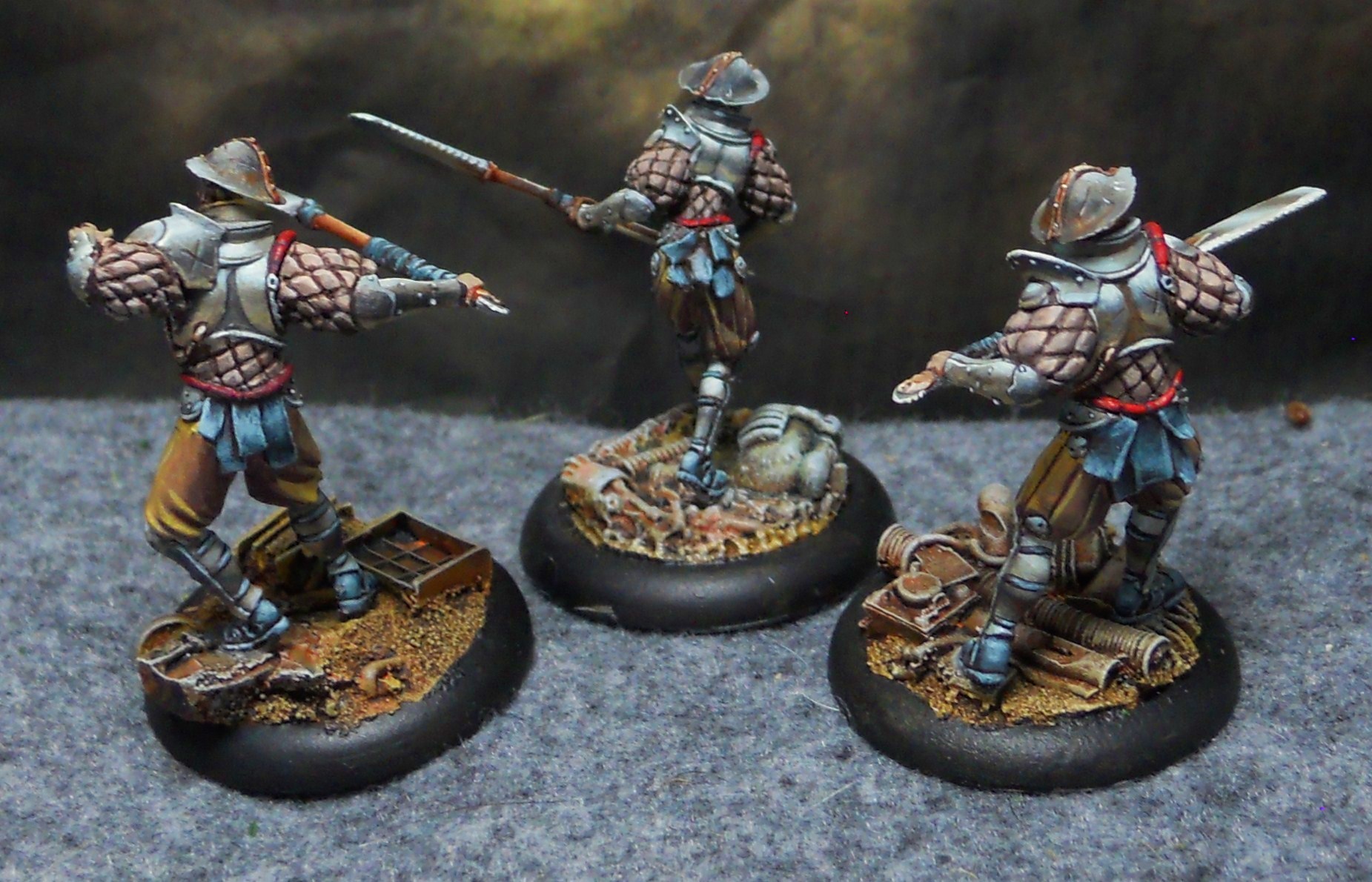 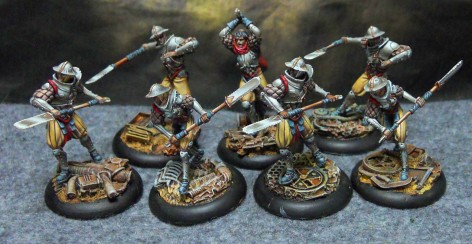 And the whole group. You can field up to six Flock per full 500 points of army, although the Shepherd can’t squadlink with that many at once.

~Hope you enjoyed the article. I already have a couple more Dark Age painting articles planned.

Author: Ben Williams
Ben Willimans is a Professional Painter and Columnist at Bell of Lost Souls. He has been involved in the hobby and art side of miniatures and the tabletop gaming industry for over 20 years. He has won multiple national painting awards.
Advertisement
Dark Age Game Tutorial Hobby Painting
Advertisement 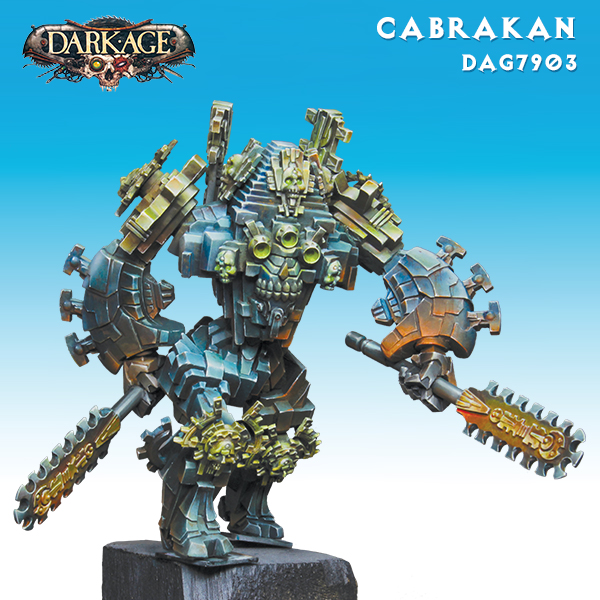